We left Southwest Harbor, Maine on July 10. We crossed the Gulf of Maine and pulled into Shelburne, Nova Scotia. The trip took exactly 24 hours. The weather cooperated and we had very smooth seas and light winds. Cath took her usual 8PM to midnight shift and said it was uneventful. However my shift got very busy at about 3AM. In the span of two hours no fewer than eight southbound sailboats crossed my path. Two encounters required course changes. These boats, it turns out, were returning to their respective ports having just competed in the Marblehead to Halifax race. It was fun to track them all on radar.

Shelburne is an official maritime port of entry into Canada. The Shelburne Yacht Club assists visiting boaters by allowing them to tie up at the fuel dock to contact Canadian customs. Our call went very smoothly. Often they will come to the boat and inspect you but we received our document number over the phone and were done.

We anchored in Shelburne Harbor for two nights. Shelburne is a small but beautiful hamlet founded in 1783. Many of its building date to 18th century. It still has an active fishing industry and shipbuilding industry. 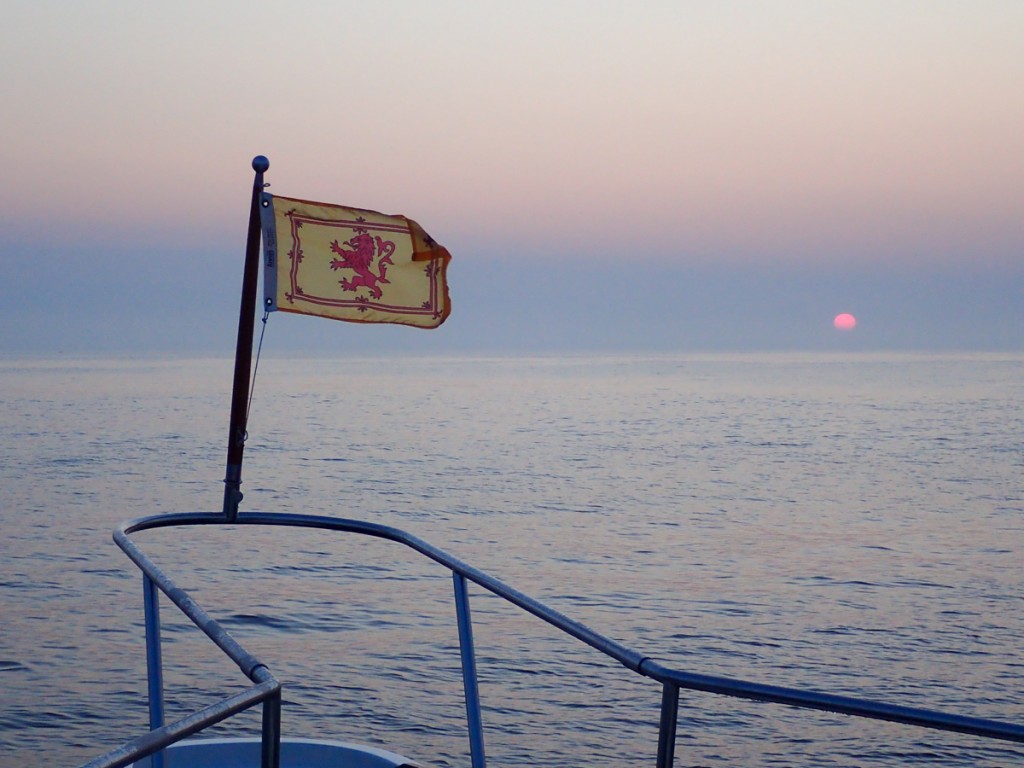 Sunrise on the Atlantic 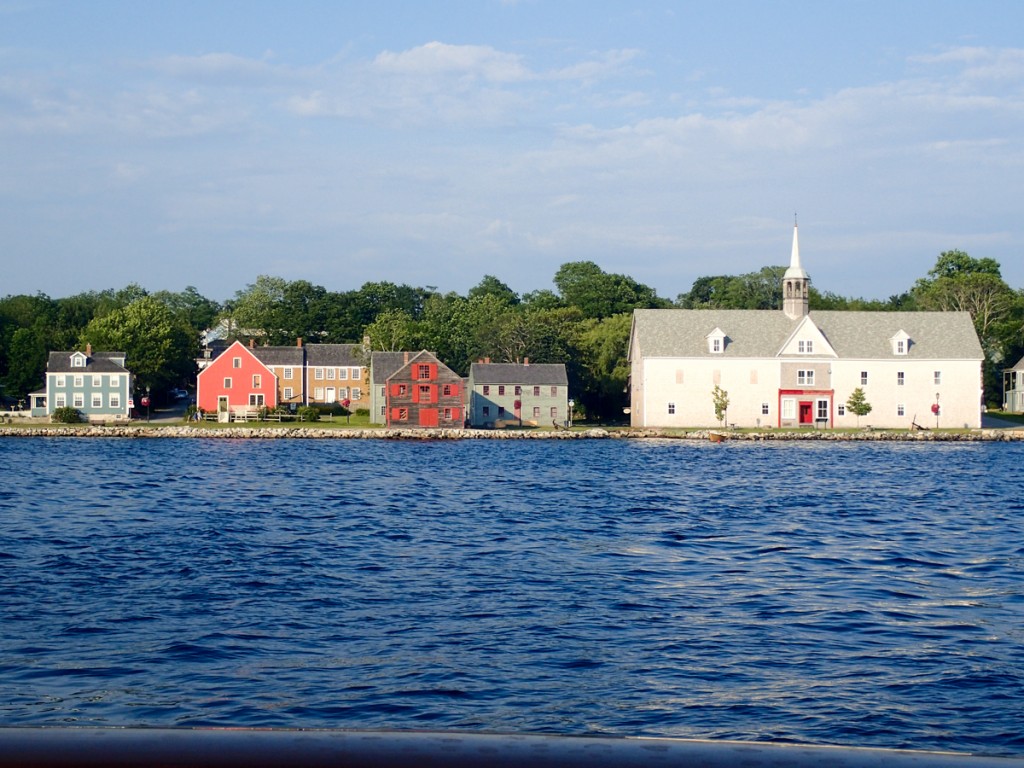 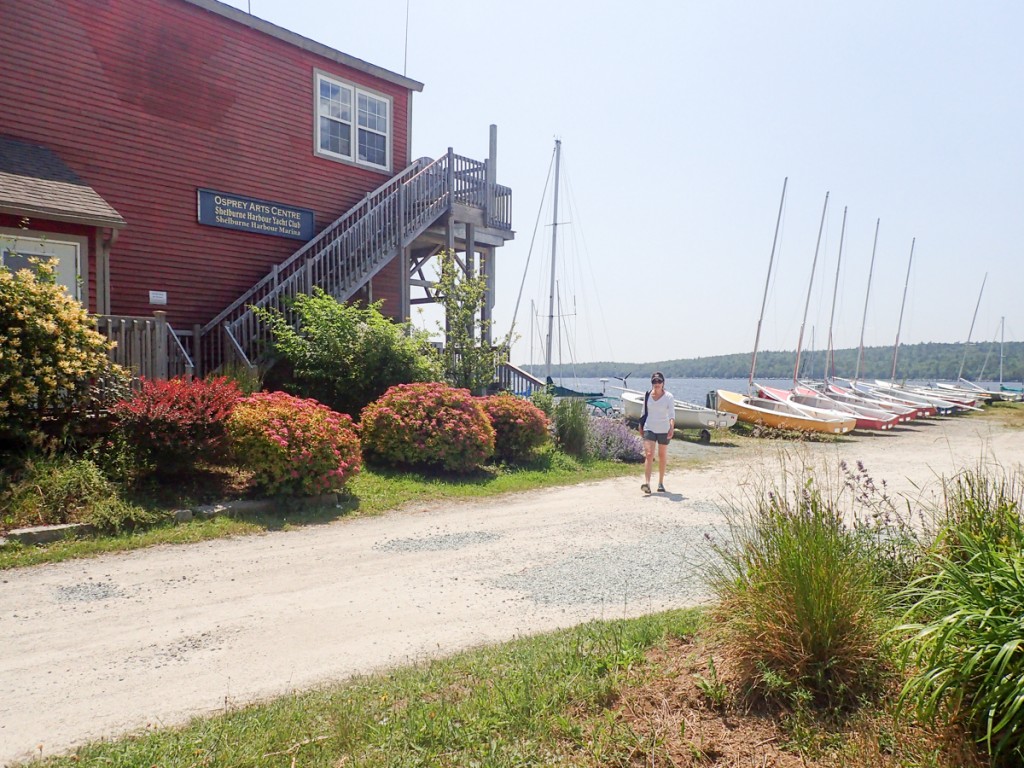 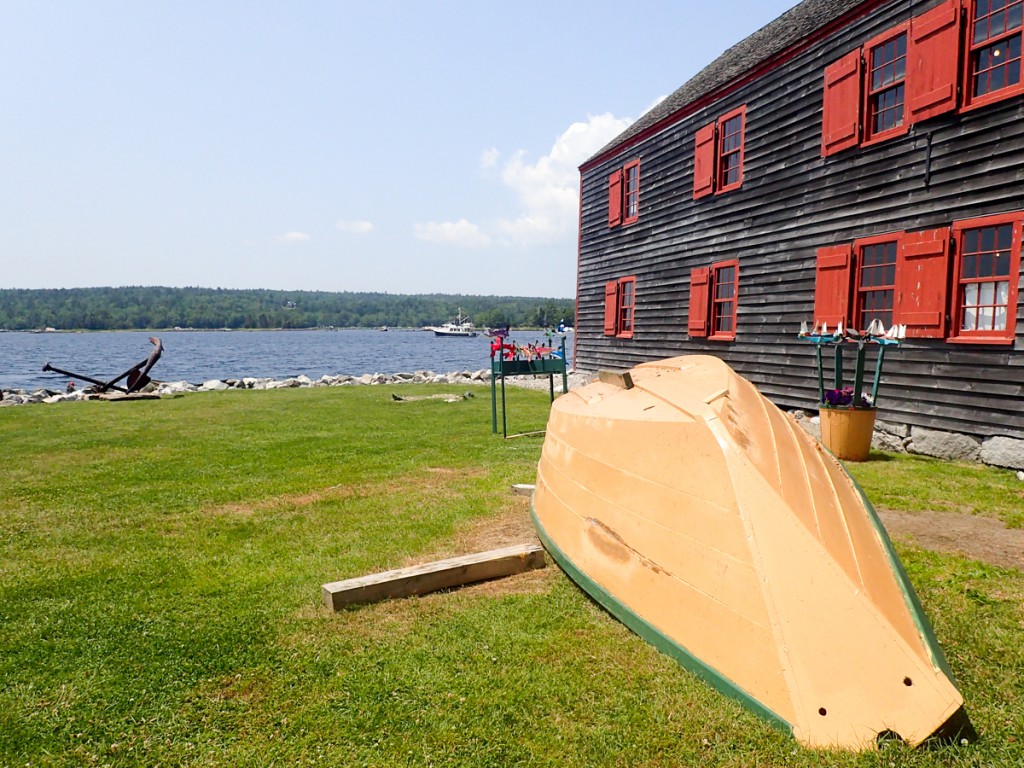 Lunenburg was our next port of call as we began our slow crawl up the Atlantic coast of Nova Scotia. The eleven hour trip was again perfect with no wind and smooth seas. We did have the thrill of seeing many Minke whales. One we almost hit but at the last second it dove under the bow. I was not able to photograph any of them but below is a pic from the web. This is what we saw; back and fin only as they briefly surfaced. 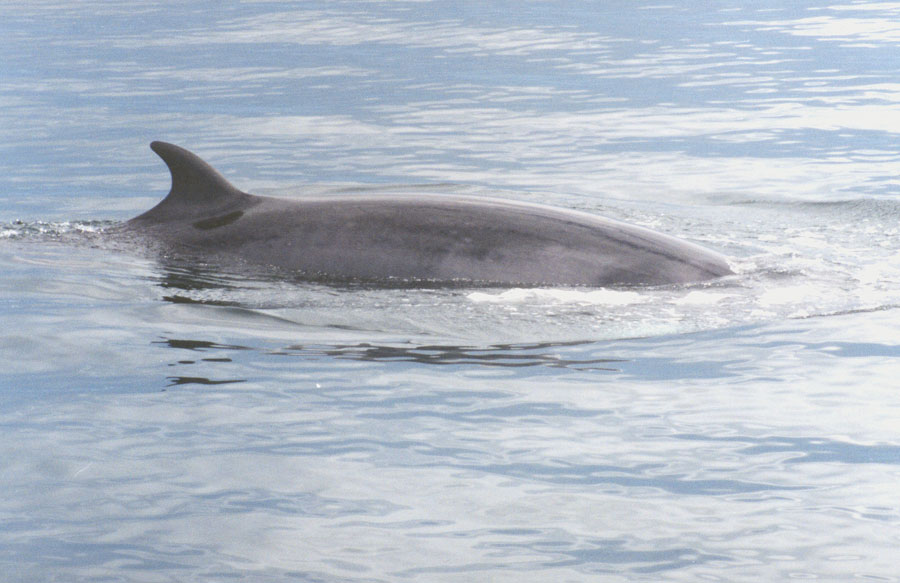 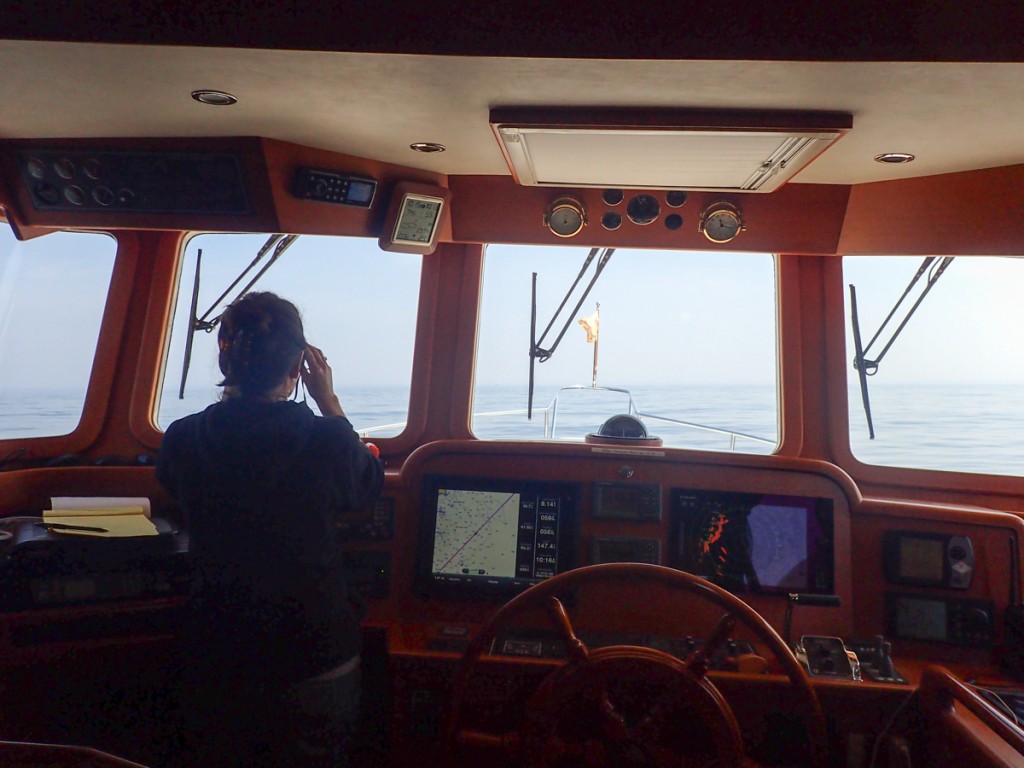 Cath on the lookout for whales

Lunenburg is a town of fair size with a population more than double that of Shelburne. The harbor has plenty of room to anchor and is fairly well protected. Founded in 1753, Lunenburg was designated a UNESCO World Heritage Site in 1995. The town is replete with restaurants and shops many in historic buildings. The town has been a factor in many wars from the early 1700’s through WWII. The Fisheries Museum of the Atlantic is here and the replica schooner “Bluenose II” is operated by the museum and based here. On our second day in port we watched the Bluenose depart. Turns out it left for Halifax, our next port of call, and we would be its neighbor on the Halifax piers. 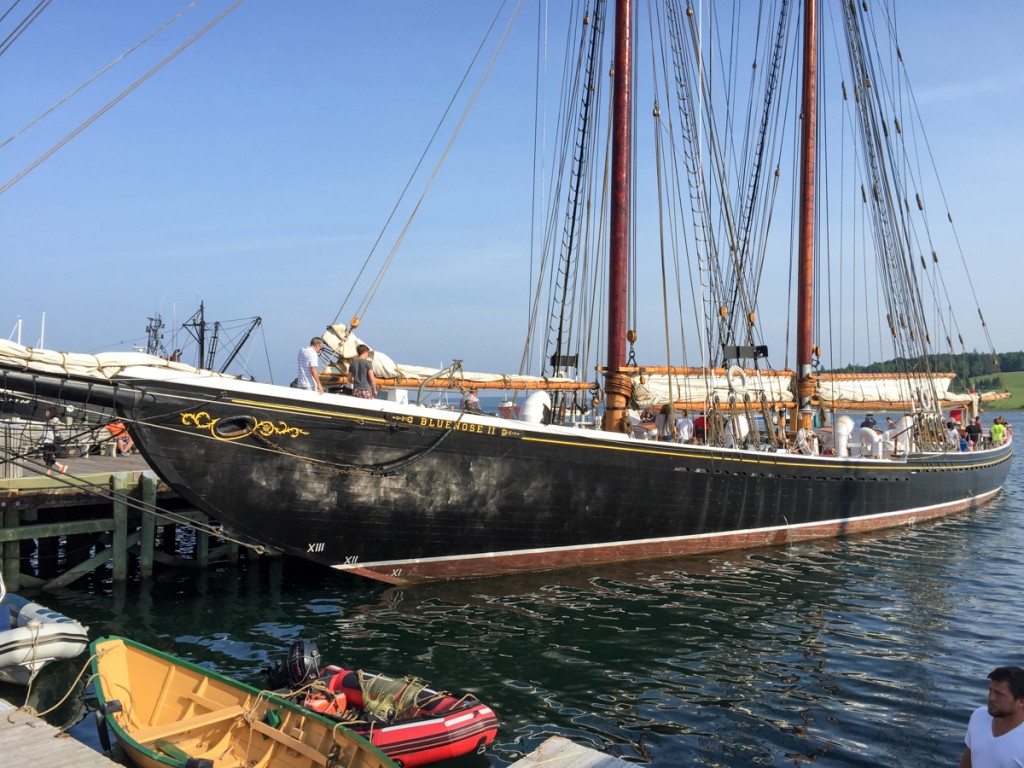 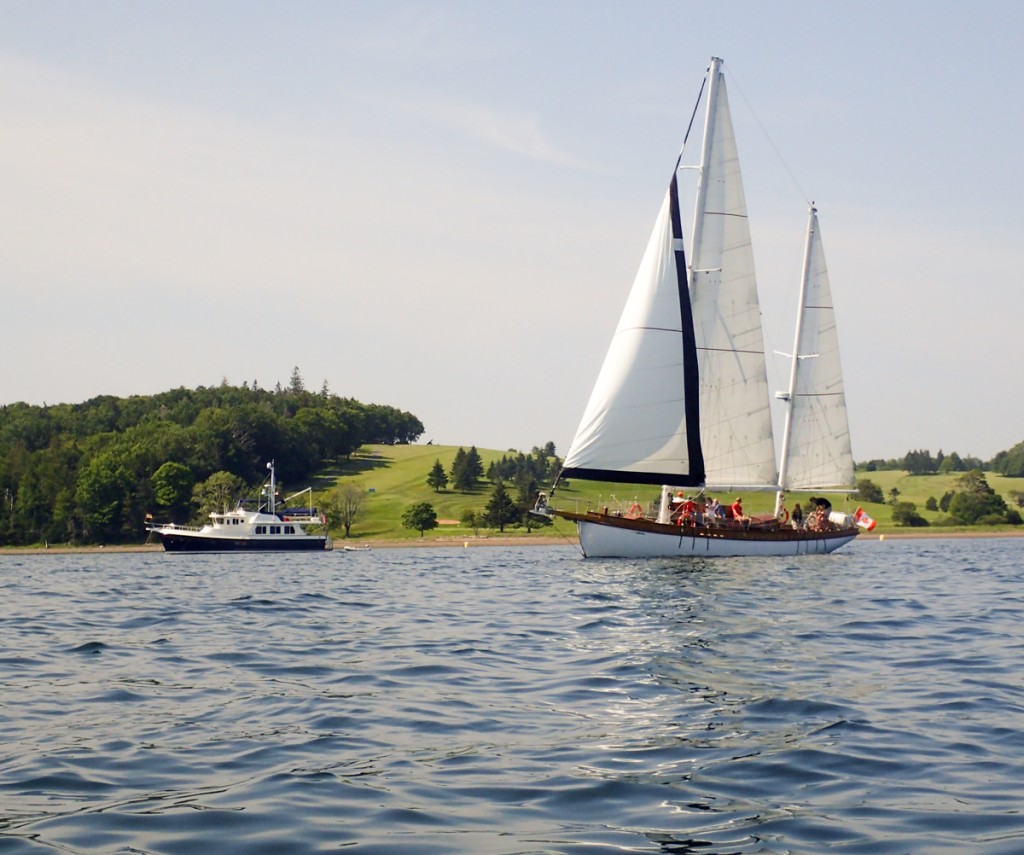 Lunenburg is also home to the Canadian Dory Racing Association. Below is the fascinating history of this Association and its sister club in Gloucester MA.

In 1951, Lloyd Heisler of Mahone Bay, Nova Scotia and Tom Frontiero of Gloucester, Massachusetts, met in a bar in Lunenburg. They began a conversation that turned into a debate about which dory rowers from which fishing town were the superior rowers. They decided that the only way to settle the matter was to challenge each other to a race. Tom took the idea of this challenge with him back to Gloucester and the process of the International Dory races had begun.
In June of 1952, Lloyd and his dory mate arrived in Gloucester, Massachusetts to settle the bet. Although the race did go to the Canadian team, the competition and comradery that developed between the two fishing towns could not be forgotten. Every June since 1952, Lunenburg, Nova Scotia sends their best teams of rowers from each category to race against their American counterparts in Gloucester, and every August since 1952, Gloucester teams take their turn coming to Lunenburg to race in Canadian waters. This year will mark the 63rd anniversary of dory racing and the tradition is still going strong. These past 63 years has continued to strengthen the bond between these two fishing towns, and every year we once again look forward to some fun and competition with our American friends. Dory racing is a part of our heritage and we hope to continue this tradition many years into the future. 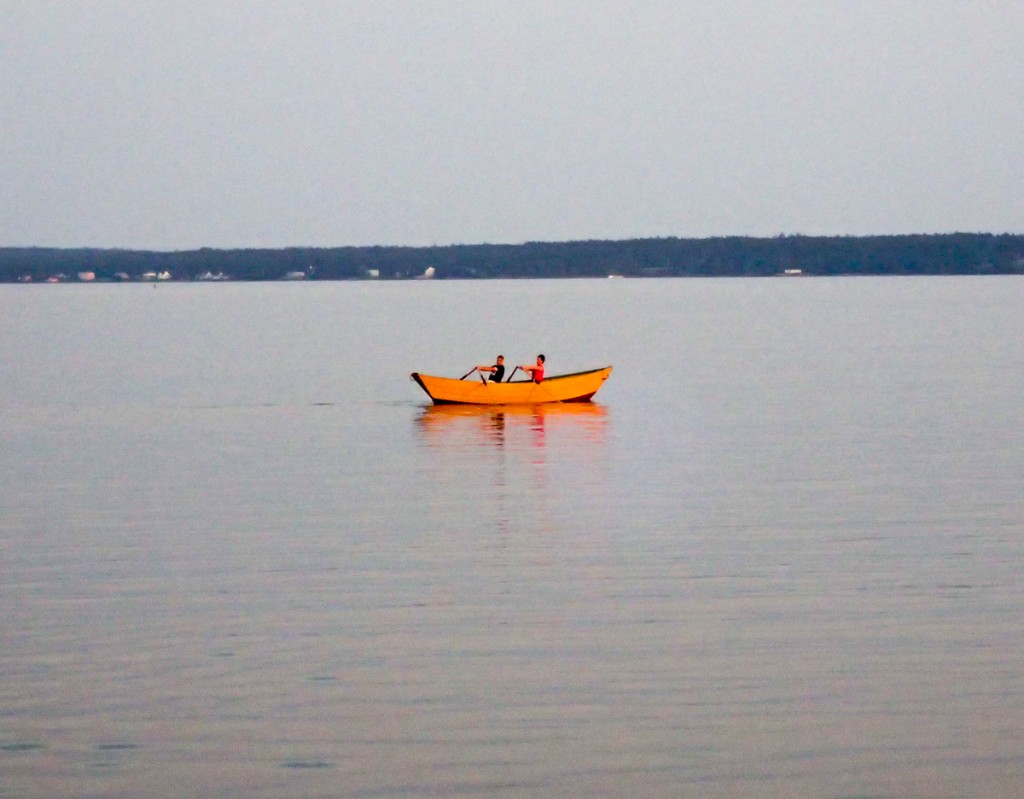 We loved the town and will stop again on our return to the states.

Fog. We weighed anchor at 6:30AM in pea soup fog. With our fog horn automatically blasting every two minutes we crept past Battery Point light house and down the bay to the Atlantic. The fog remained and we navigated the six hour trip by radar and chart plotter. As we approached Halifax harbor the fog lifted slightly but than returned not lifting till we were just off the commercial piers. 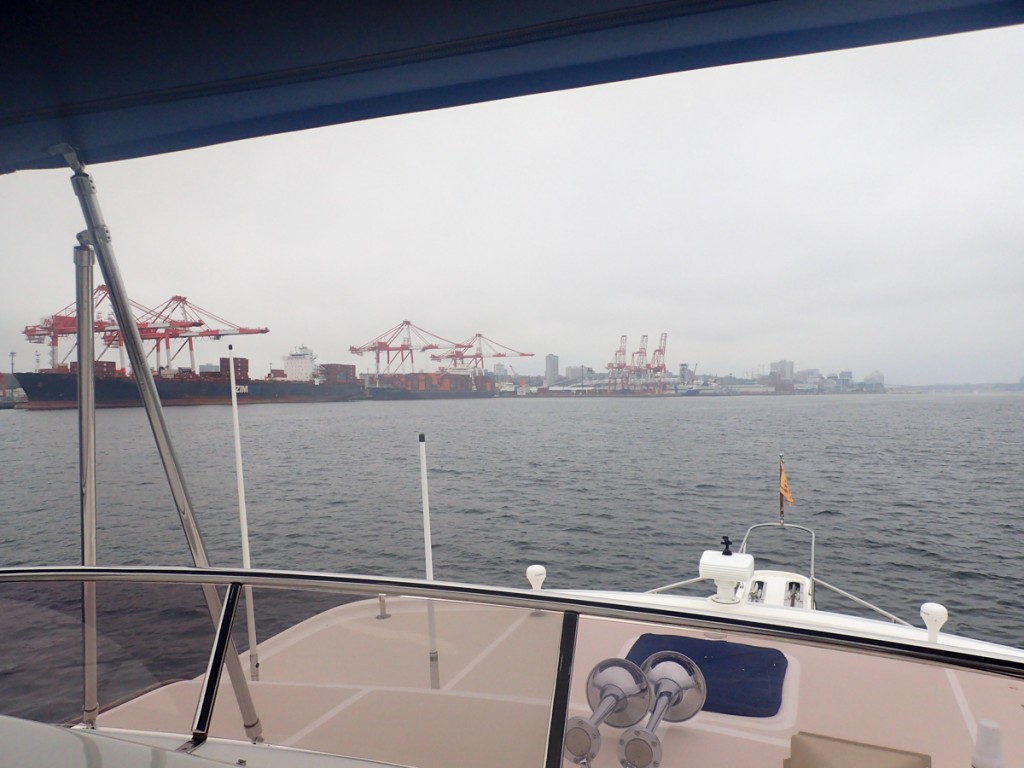 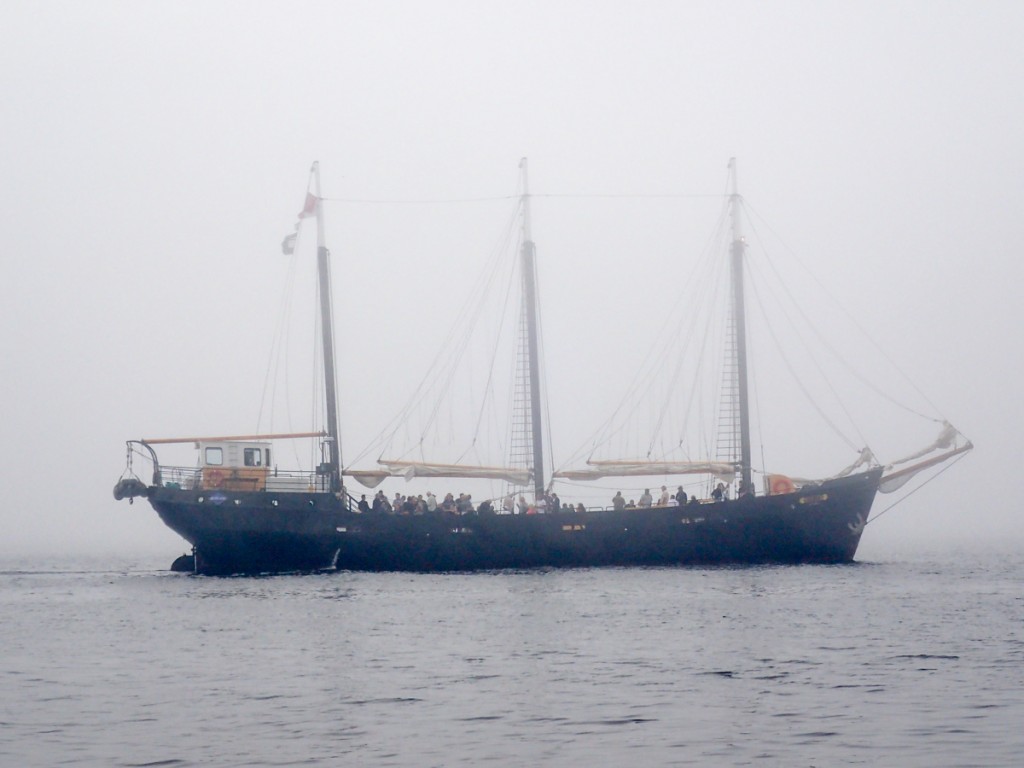 The next couple of days would bring near perfect weather and no fog. Our pier assignment was also perfect. There is no real marina on the waterfront and a development group runs the piers and assigns the berths. As luck has it we were berthed next to Bluenose  II. We were also the smallest boat berthed. About a half mile down the waterfront are the cruise ship berths. In for two days was the Queen Mary 2 prior to departing for Southampton England.

Halifax is a small, manageable city with a population just under a half million. Named after the Earl of Halifax it was founded in 1749. The harbor is the heart of the city but also saw one of the greatest Canadian disasters in history. Know as the Halifax Explosion, this catastrophe occurred on December 6, 1917. The SS Mont-Blanc, a French cargo ship fully loaded with wartime explosives collided with the Norwegian vessel SS Imo. The French ship caught on fire igniting her cargo and causing a cataclysmic explosion. More than 2000 people were killed and over 9000 injured. The blast was the largest man-made explosion prior to the development of nuclear weapons. 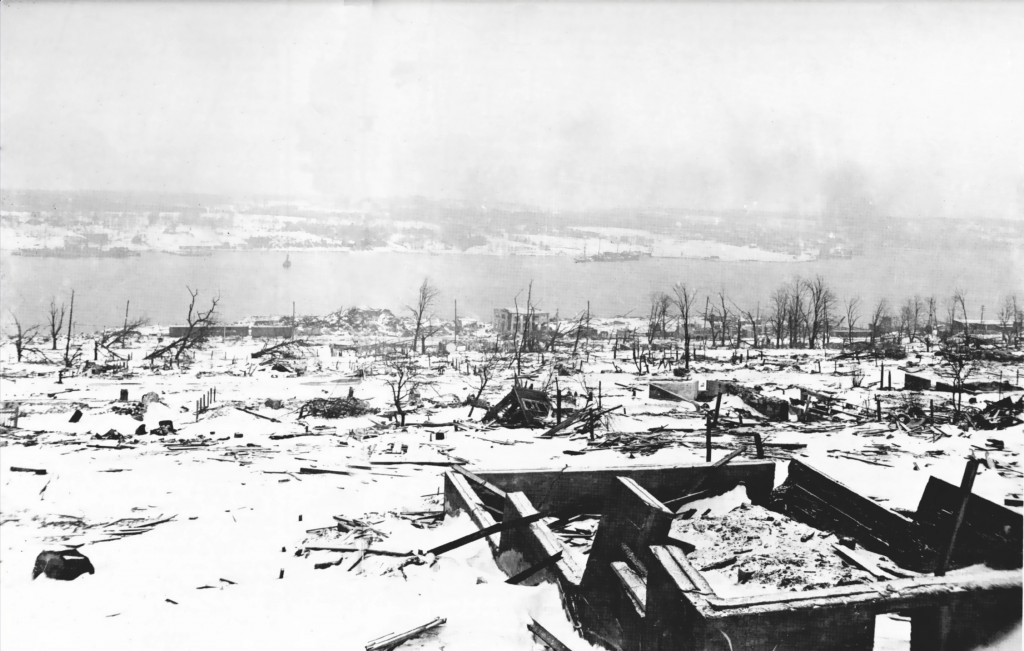 The current city is a major cultural center. It retains its maritime and military traditions and is home to a sizable Canadian navy. Fort George located on Citadel Hill was first fortified in 1749. The Citadel was never defeated because it was never attacked. The story told is that numerous commanders including General George Washington spied on the fort but declined to attack due to its impenetrable design. 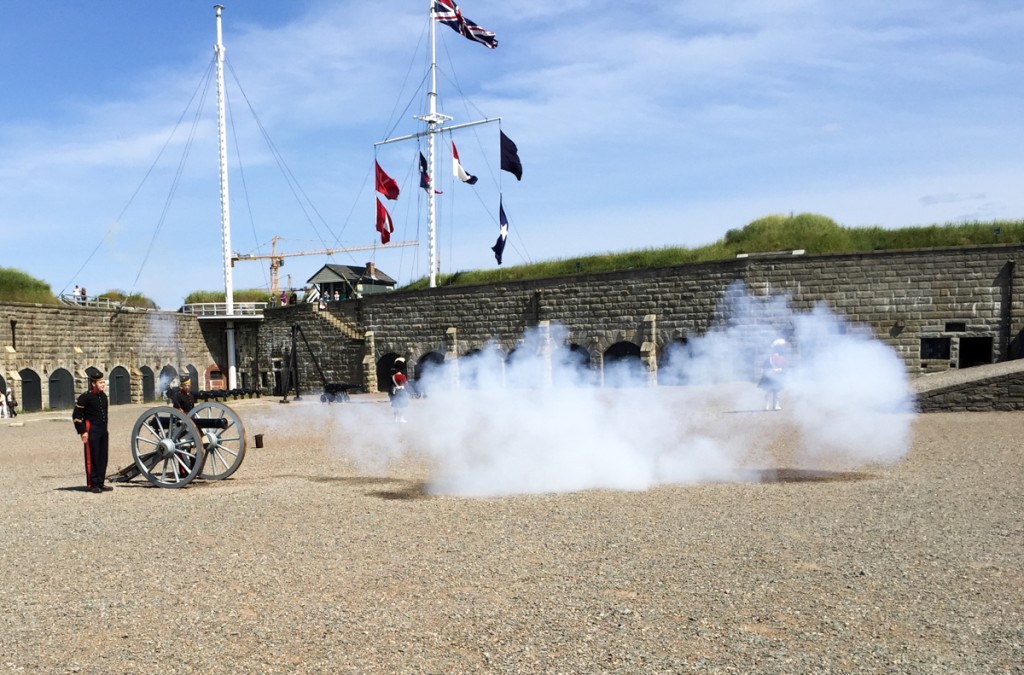 The waterfront is the heart of the city on the weekends and we really enjoyed the crowds and show. 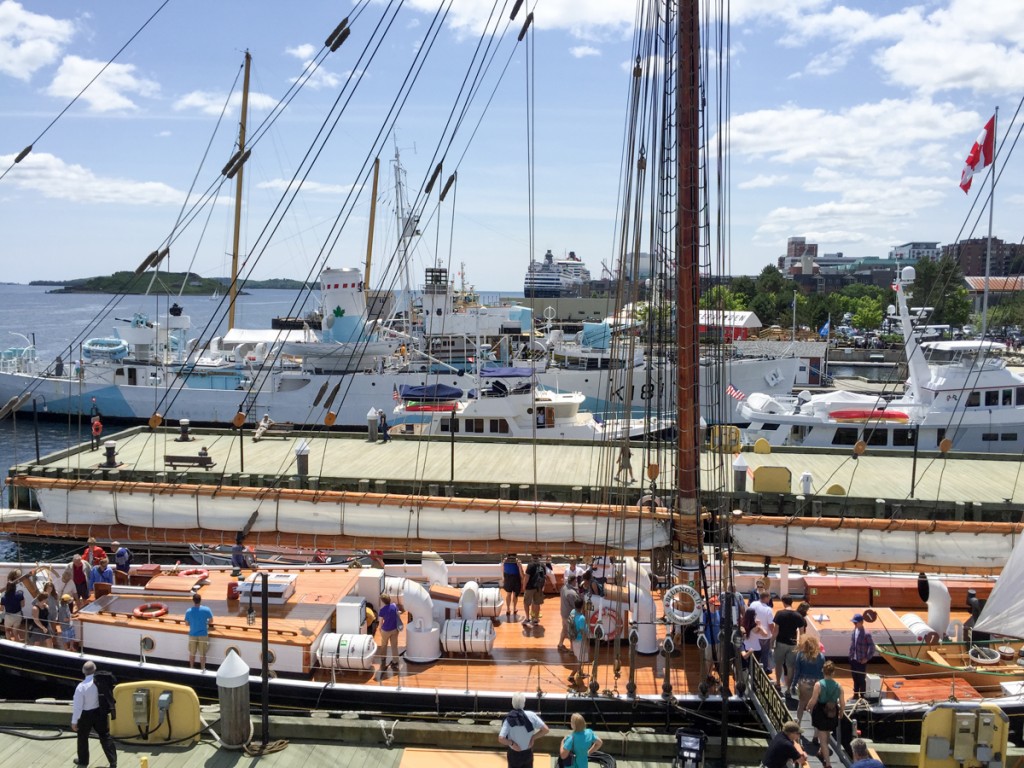 The Halifax Public Gardens are a must see. Established in 1867 the Victorian style formal gardens encompass 16 acres. The original bandstand, circa 1887, was built to commemorate Queen Victoria’s Golden Jubilee and still stands today. 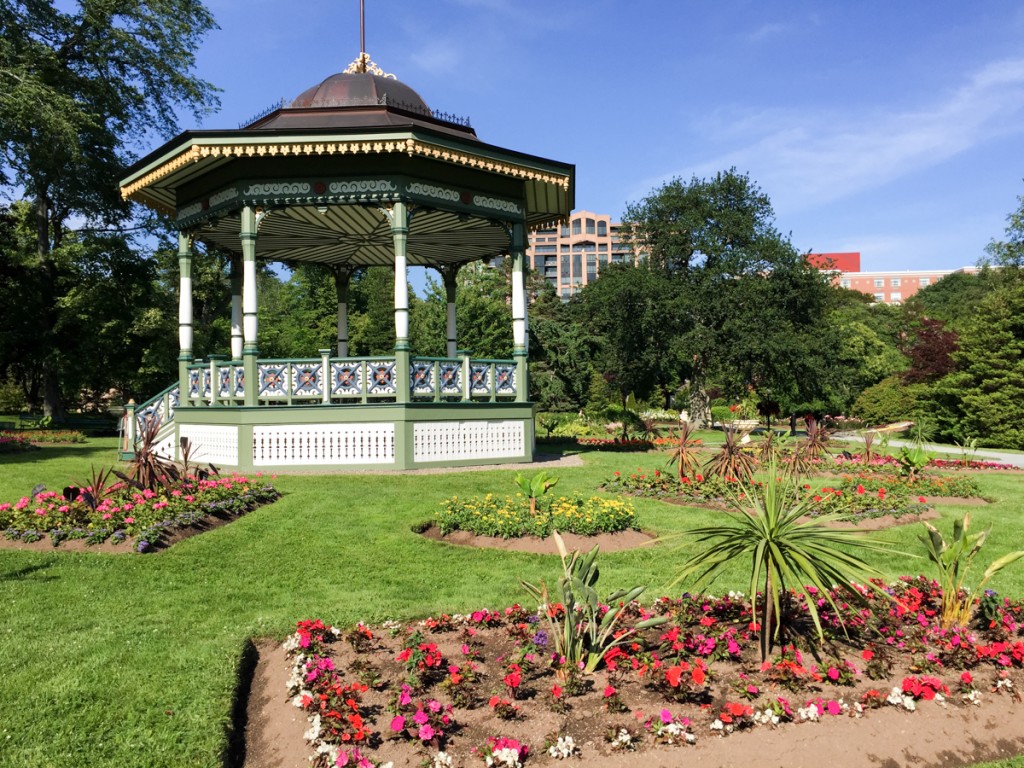 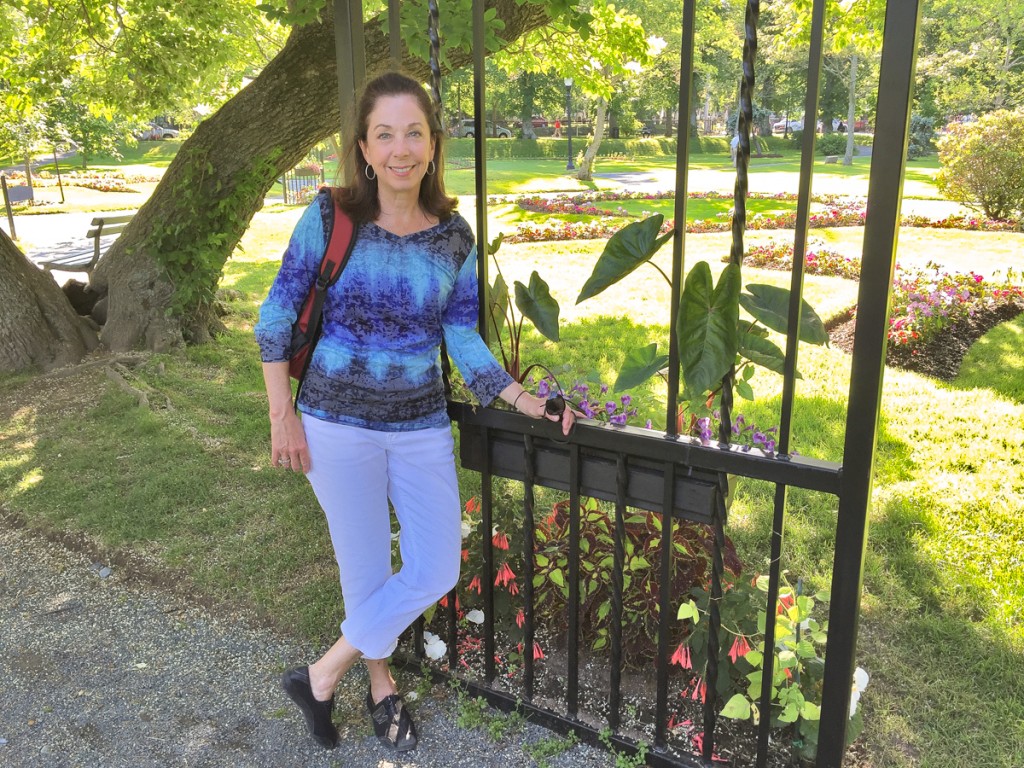 Berthed at Museum wharf we had a really short walk to the Maritime Museum. It is a fascinating museum with scale models, full size boats, and exhibits about the Halifax explosion, the Cunard family (Cunard Lines) and other historical events. 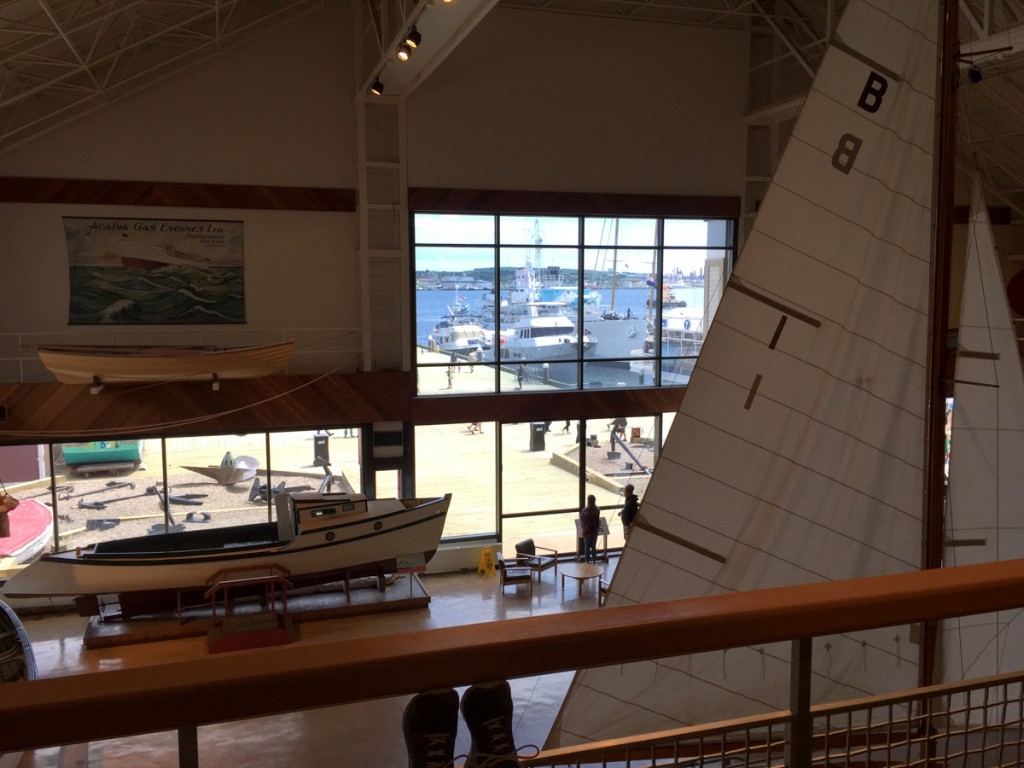 Big Smile from inside the Maritime Museum 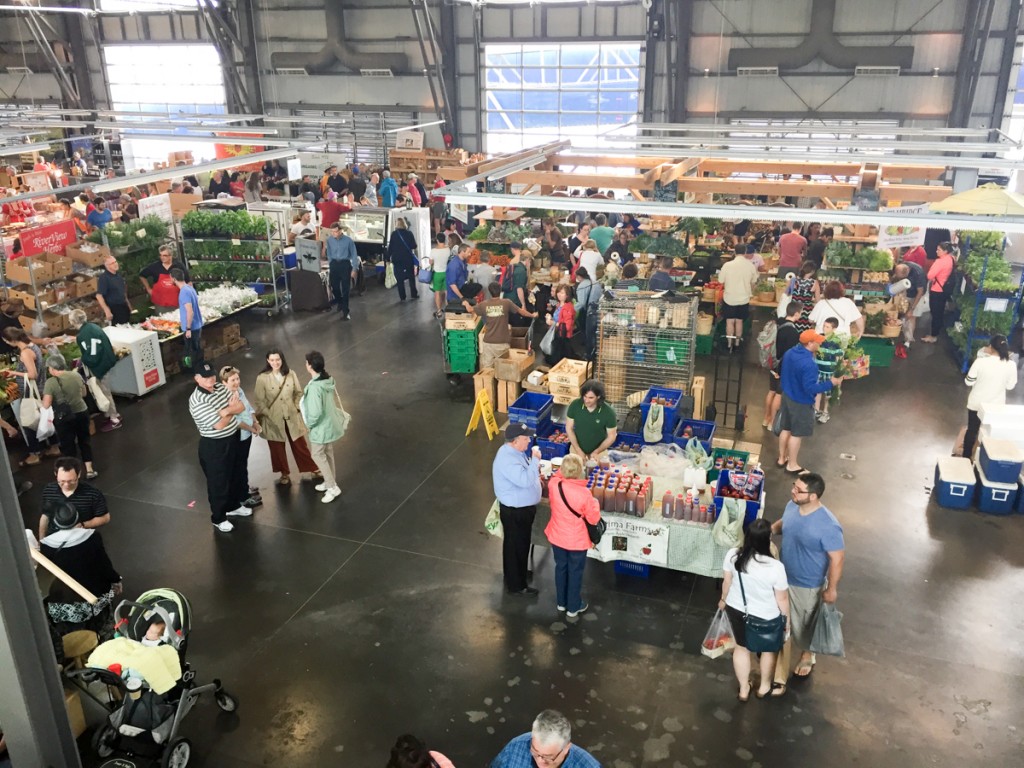 We rented a car for a day and drove to Peggy’s Cove, a picturesque cove an hour from Halifax. I was last there 40 years ago and tourism has taken over. It’s still a nice landscape and cove. 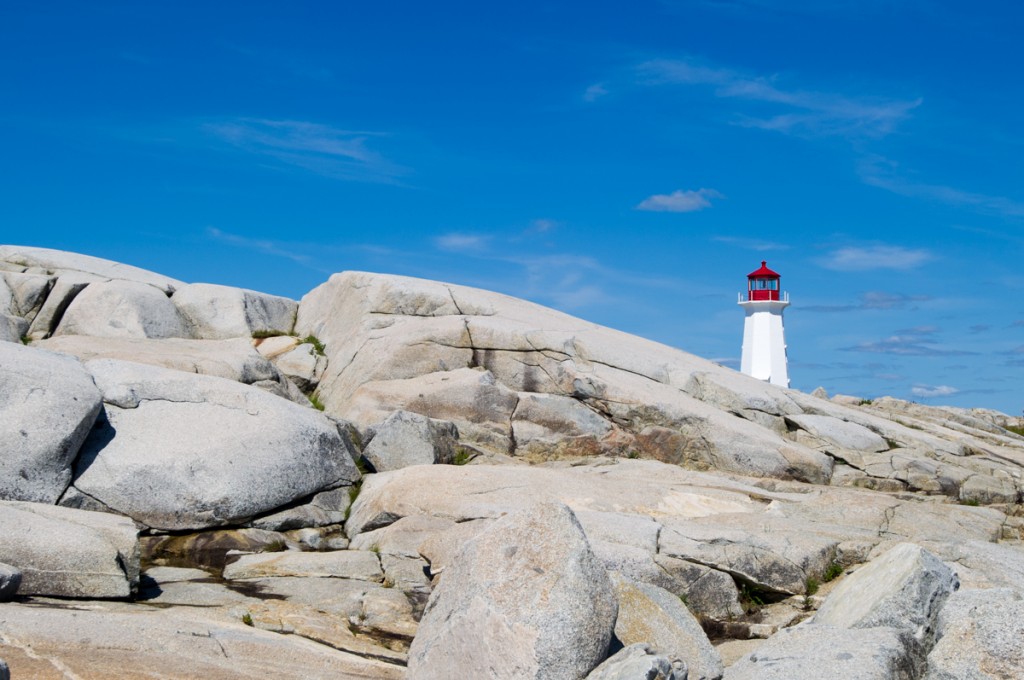 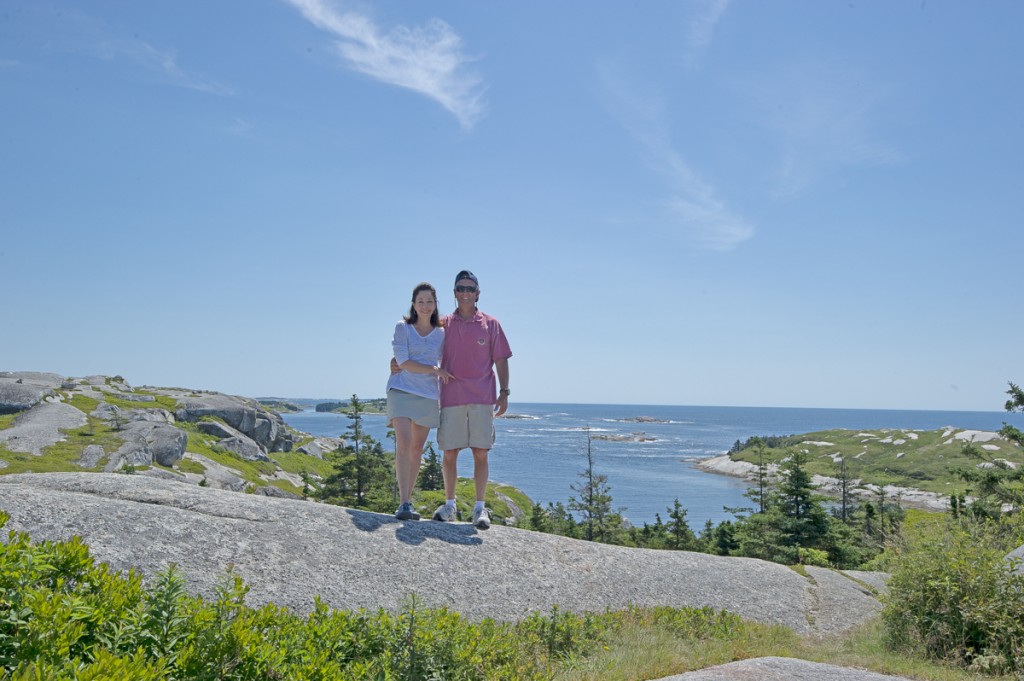 On the road to Peggy’s Cove 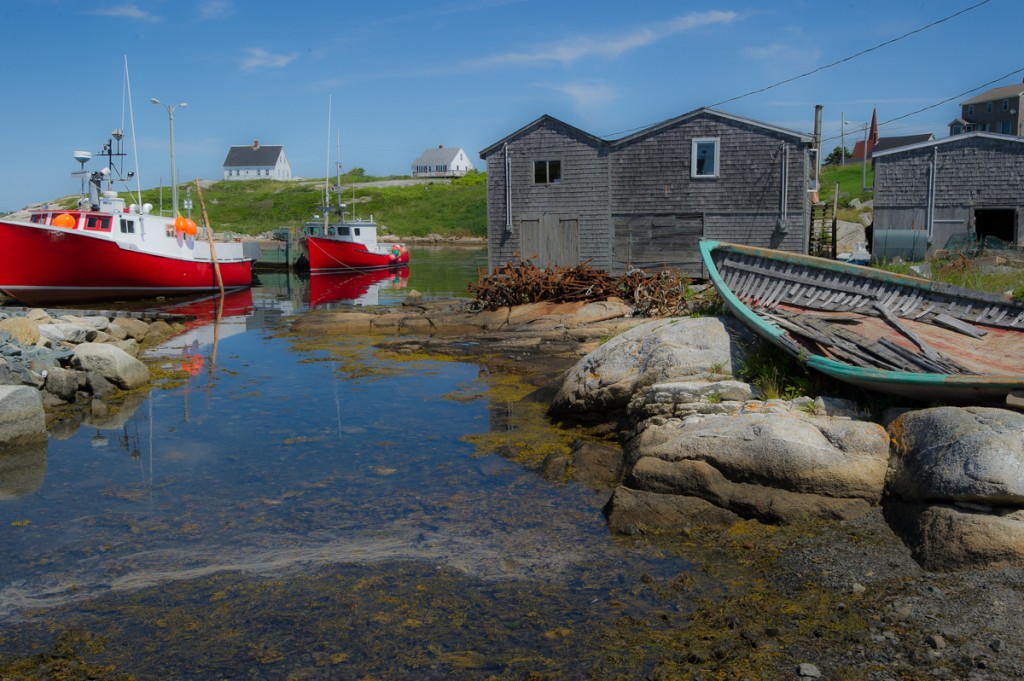 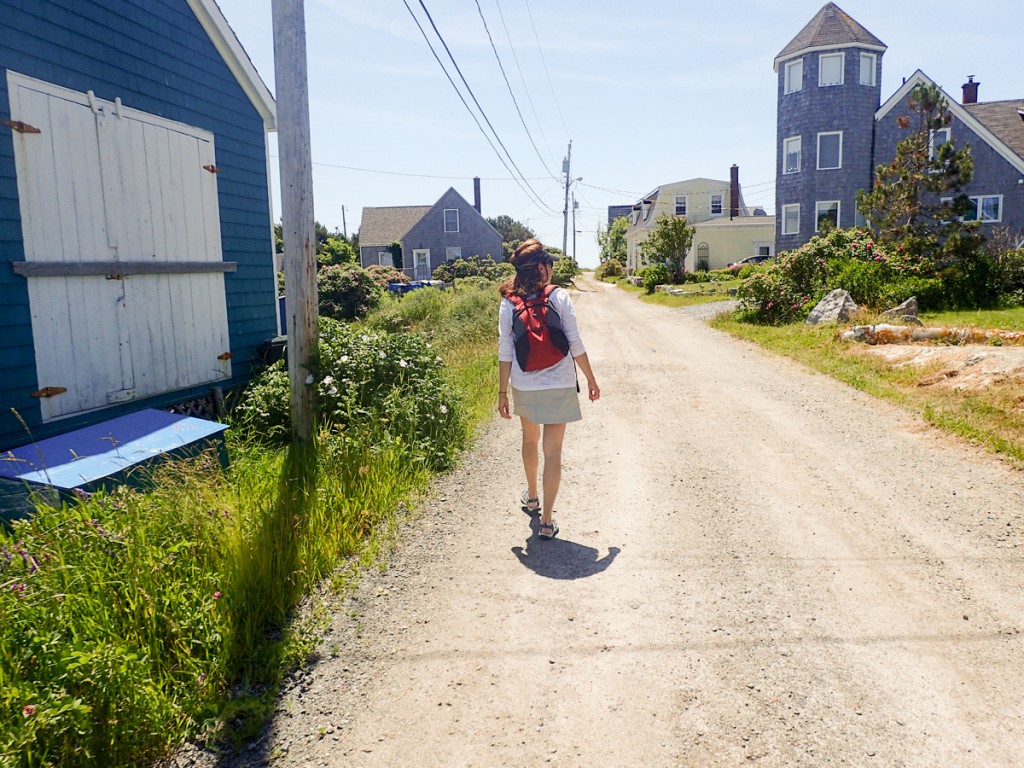 We leave tomorrow and won’t see another marina for at least a week. Our last night in town will probably find us at The Old Triangle Irish Ale House. There is a band playing tonight who we caught a couple of days ago. 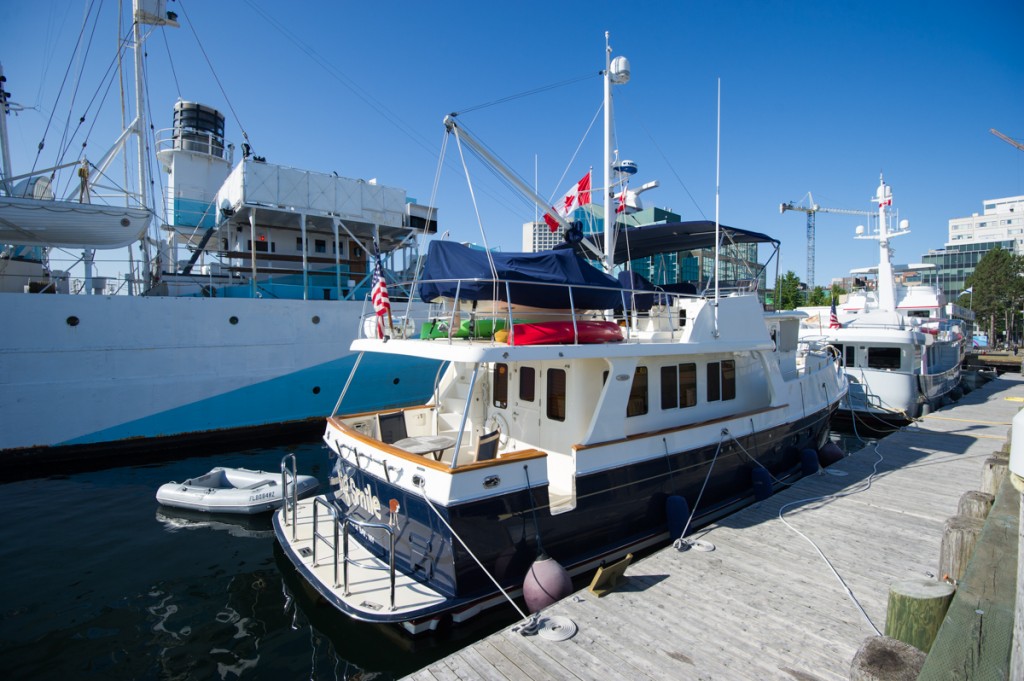