On the last day in July we left Nantucket and the Vineyard behind and headed back to this year’s home base in Greenport. With the weather being perfect, we opted to stop for two nights back on Block Island.  The Block is a low key and unpretentious place compared to the two islands we just left. Great Salt Pond is very big and can hold lots of boats, although an occasional squall can cause problems as many boats are on short scope. We’ve never dragged, here, but we were hit in the middle of the night by a dragging boat way back in 1990. 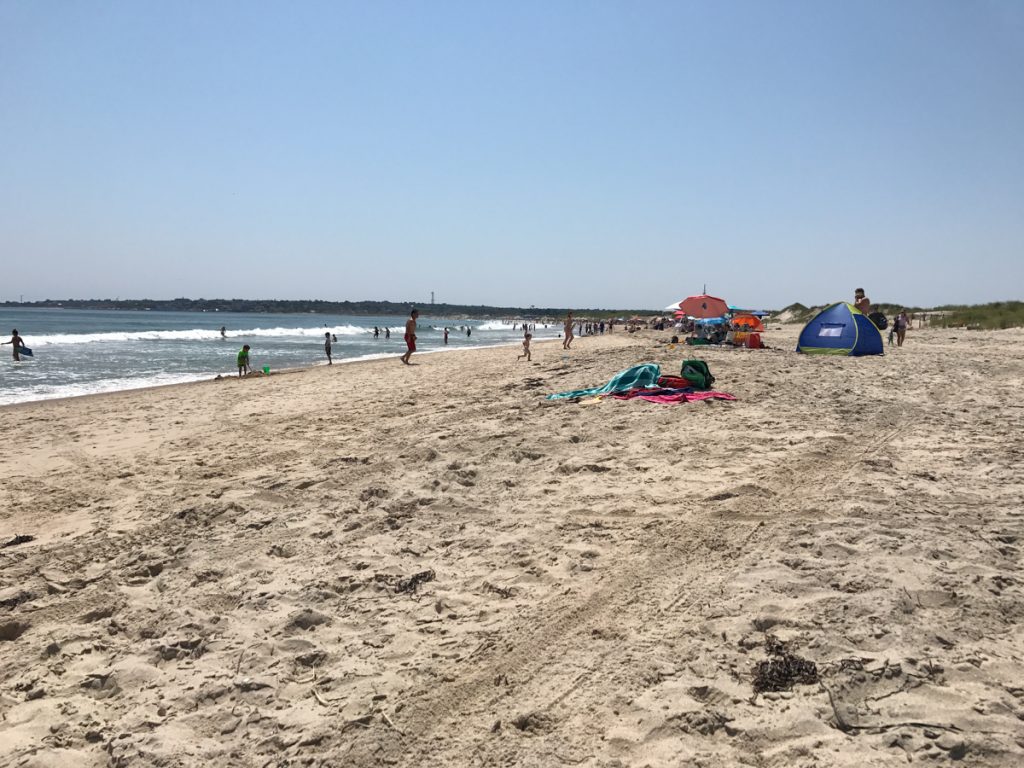 We had most of the month of August to enjoy Greenport and the north fork of Long Island before we left for our safari. Orient Beach State Park is a very nice facility for hiking and especially kayaking. They have a kayak trail map and miles of beach to walk. It appeared to us to be way under utilized. We took a several mile hike to the end of Long Beach Point. Long Beach Bar Lighthouse was built in 1870, destroyed by fire in 1963, and restored in 1990.

Cath’s undertaking for the last two years is to clean up all the mylar balloons we find floating in the water and resting on the beaches. While it might seem fun to launch these balloons, the danger to sea animals and the ugliness of the floating mylar debris should, in our opinion, be cause enough to ban them completely. 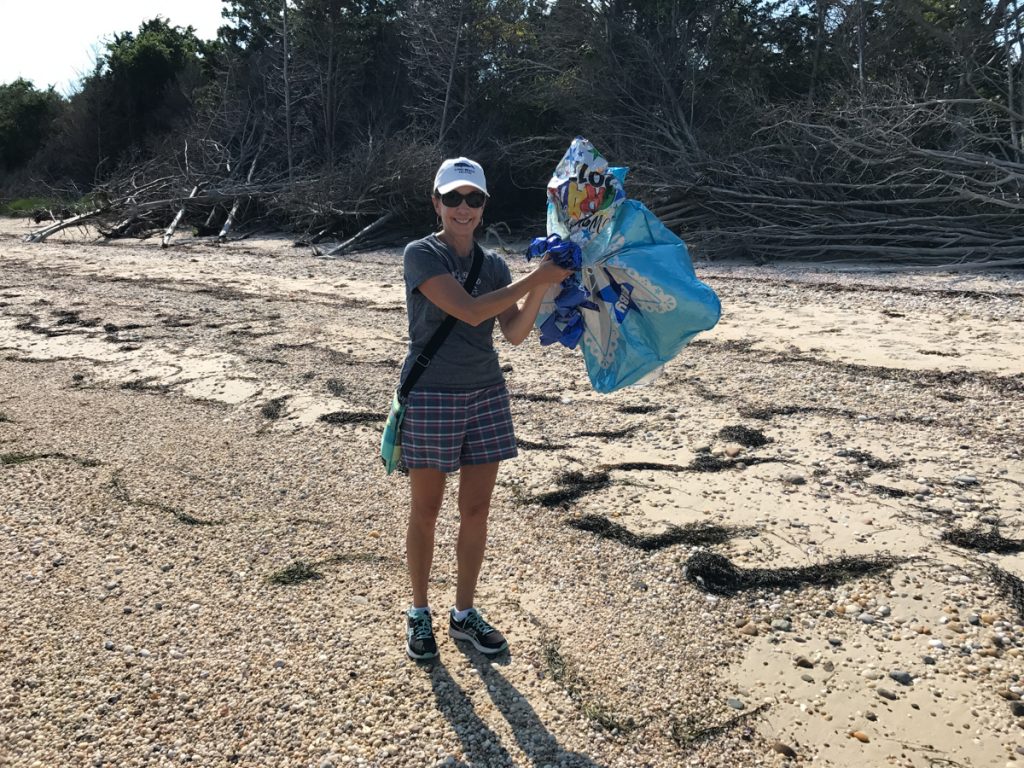 The town of Riverhead, NY, lies at the mouth of the Peconic River. Riverhead has been the county seat of Suffolk County since 1727. It is also home to “The Suffolk Theater,” a restored cabaret style theater with a busy and diverse show schedule. We had tickets for a unique, 1960s era show featuring Peter Yarrow and Melanie. It was wonderful and really took us back in time. We had seen Peter Yarrow with Paul Stookey a couple of years ago but had never seen Melanie. 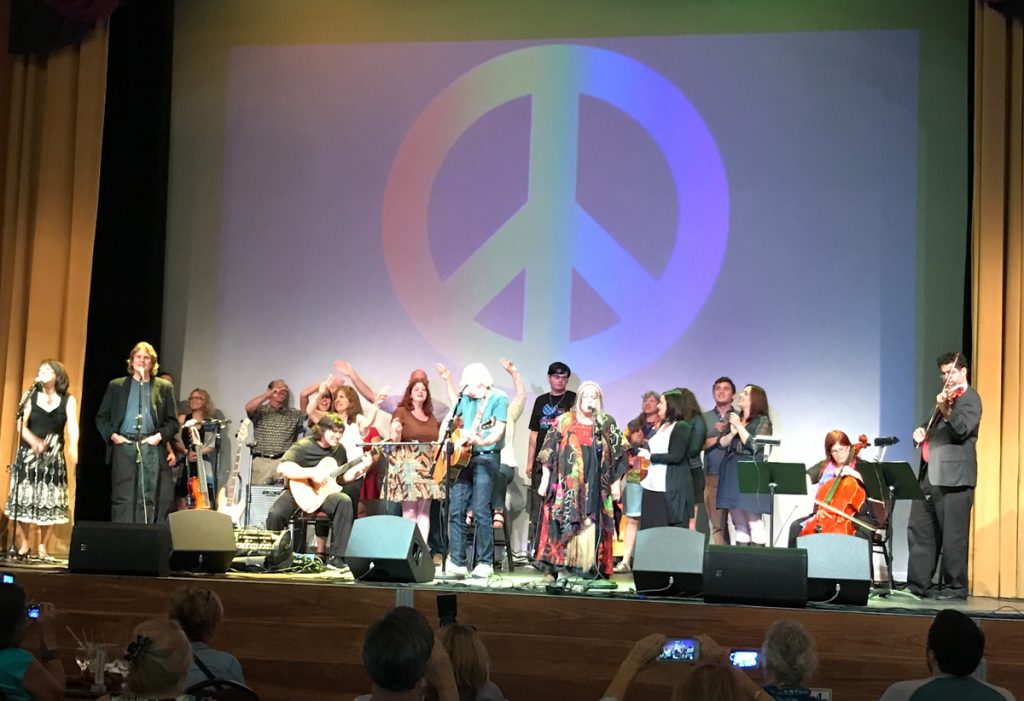 The encore: Peter Yarrow and Melanie with supporting singers and instruments

The north fork of Long Island is brimming with early American history. The town of Southold is home to the oldest English burying ground. Located at the First Presbyterian Church and founded by Puritans in 1640, The Old Burying Ground contains twenty graves dating from the 17th century. 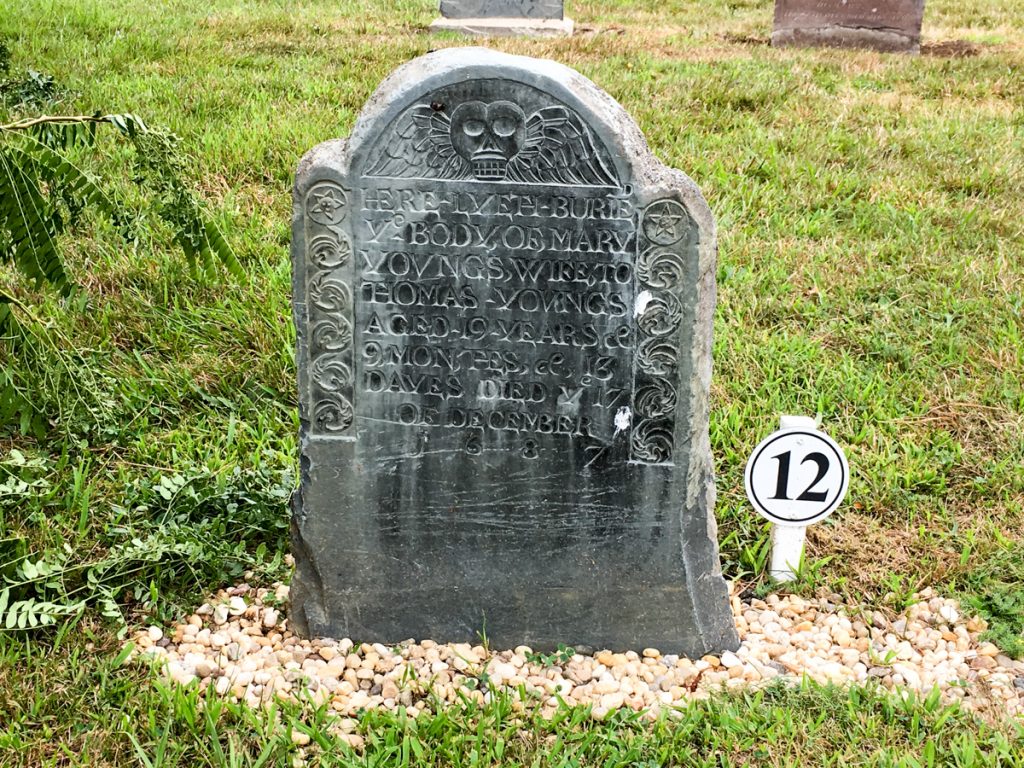 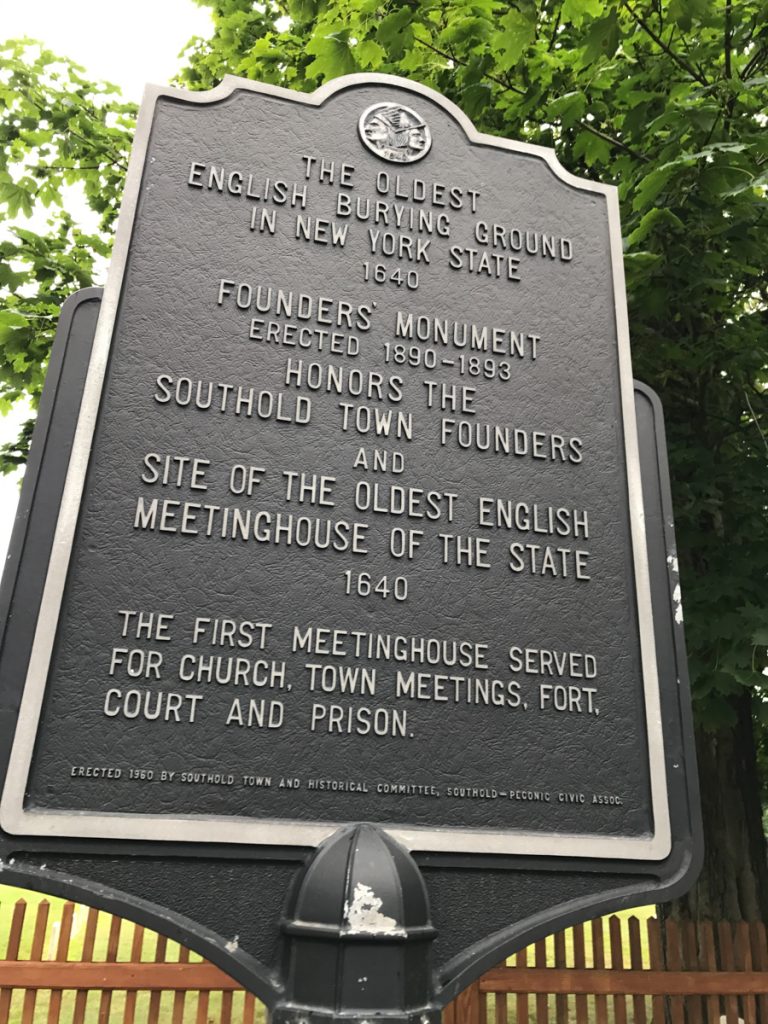 Cath comes from a very large family. I like to tell people she has 63 first cousins compared with my 8 first cousins. Many still live on Long Island with others scattered about. Big Smile had the pleasure of hosting some cousins, friends and spouses for a day on the water. We chose West Neck Harbor on the south shore of Shelter Island to anchor, swim and have lunch. 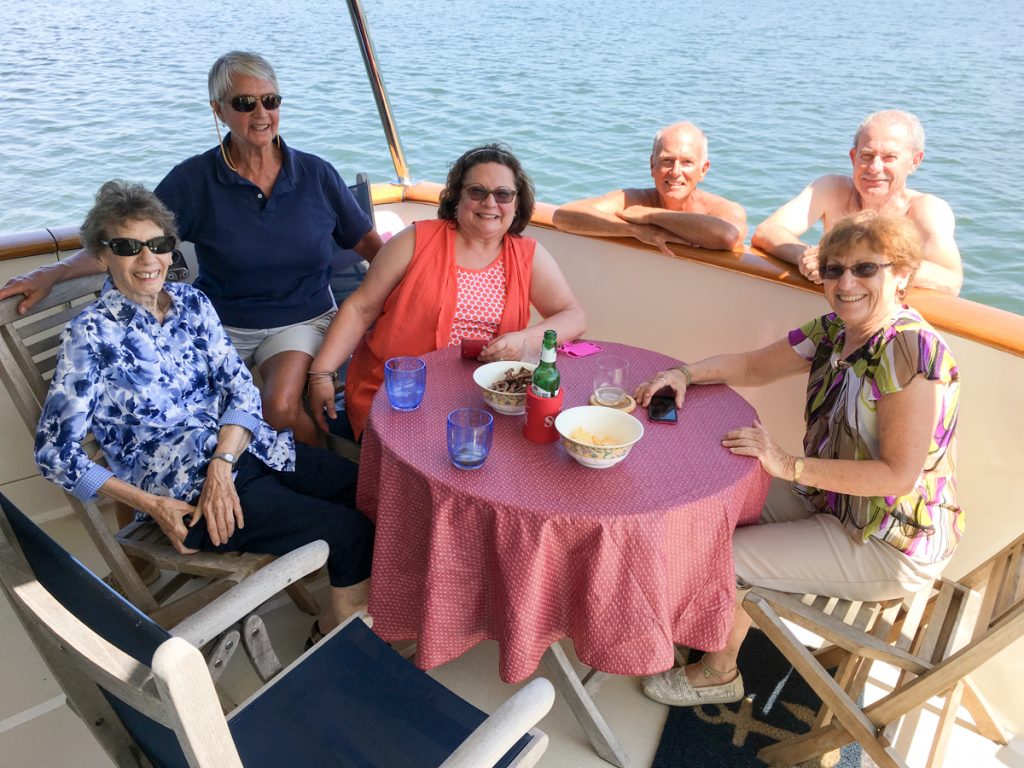 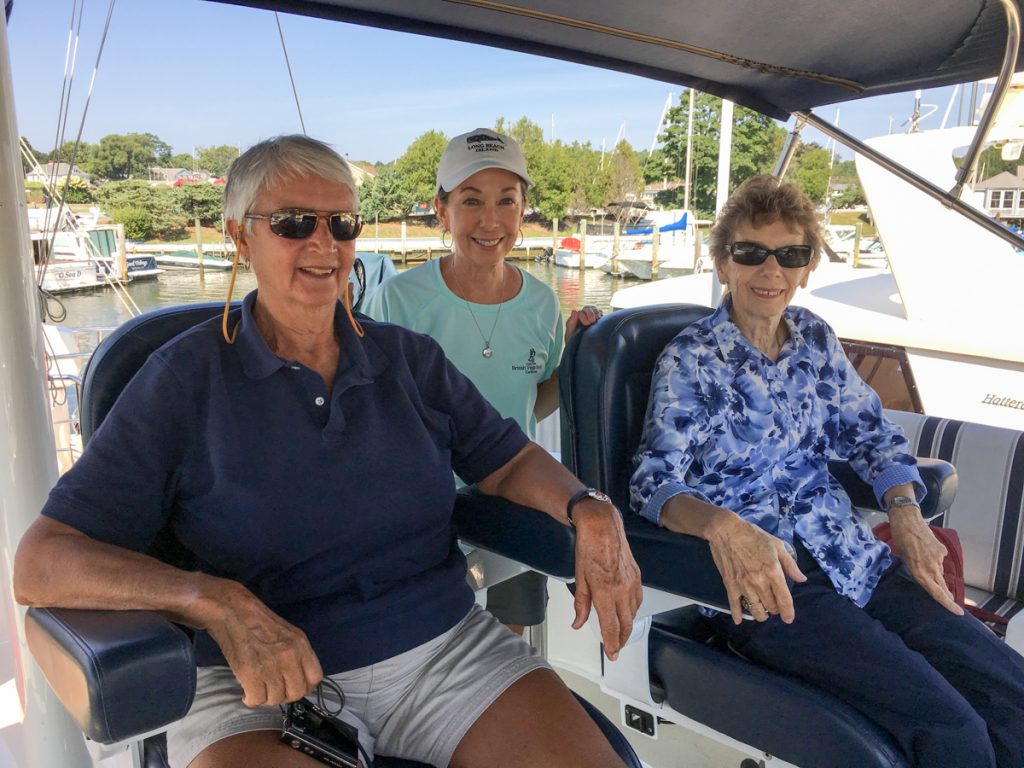 August disappeared quickly. We made a quick trip to VT to grab our “safari” clothes. We also took in one show at the Weston Playhouse, Eugene O’Neill’s “A Long Day’s Journey into Night.”  First published in 1956, it is not a particularly uplifting play, but the performance by the Weston Theater group was well done .

Two days after returning to Big Smile we made our way to John F. Kennedy Airport and boarded an Emirates flight to Johannesburg, South Africa via Dubai. Emirates is an amazing airline. On board with us were our great friends Jim and Robin. Together we would join twenty other folks for an 18 day safari. It was an amazing experience which I won’t cover in this blog but many photos can be seen here. While I won’t shill for the tour company, Odysseys Unlimited, I will say that everything about our trip worked out perfectly and our tour guide, James, was incredibly knowledgable and really just an outstanding individual. 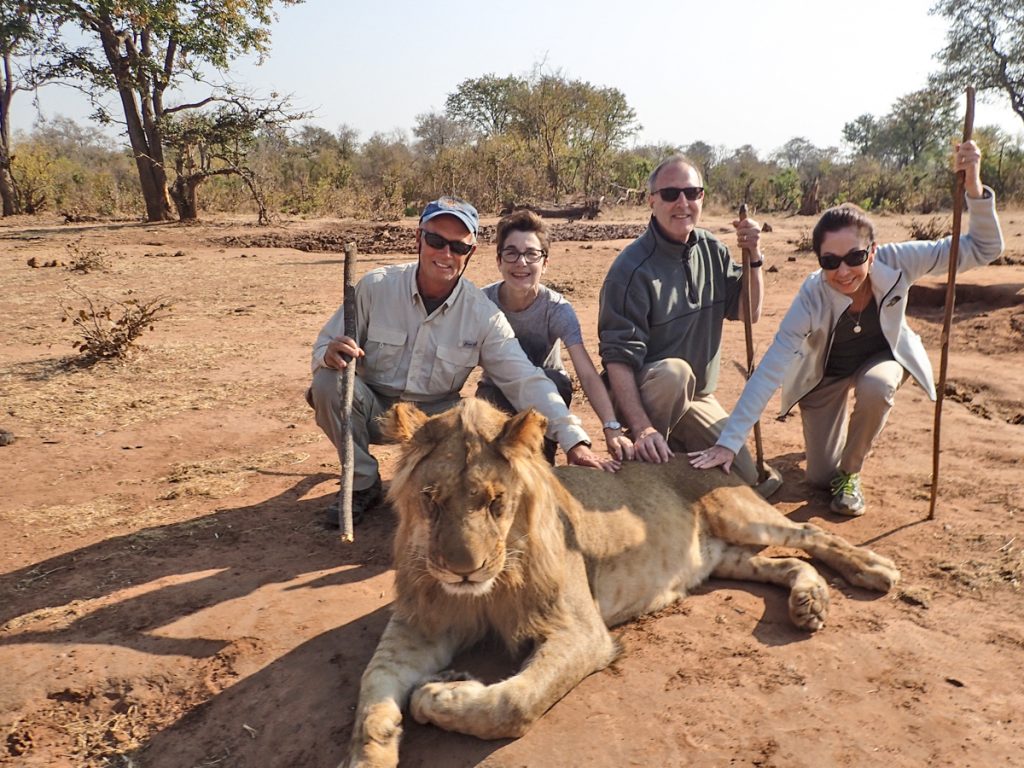 Me, Robin, Jim and Cath 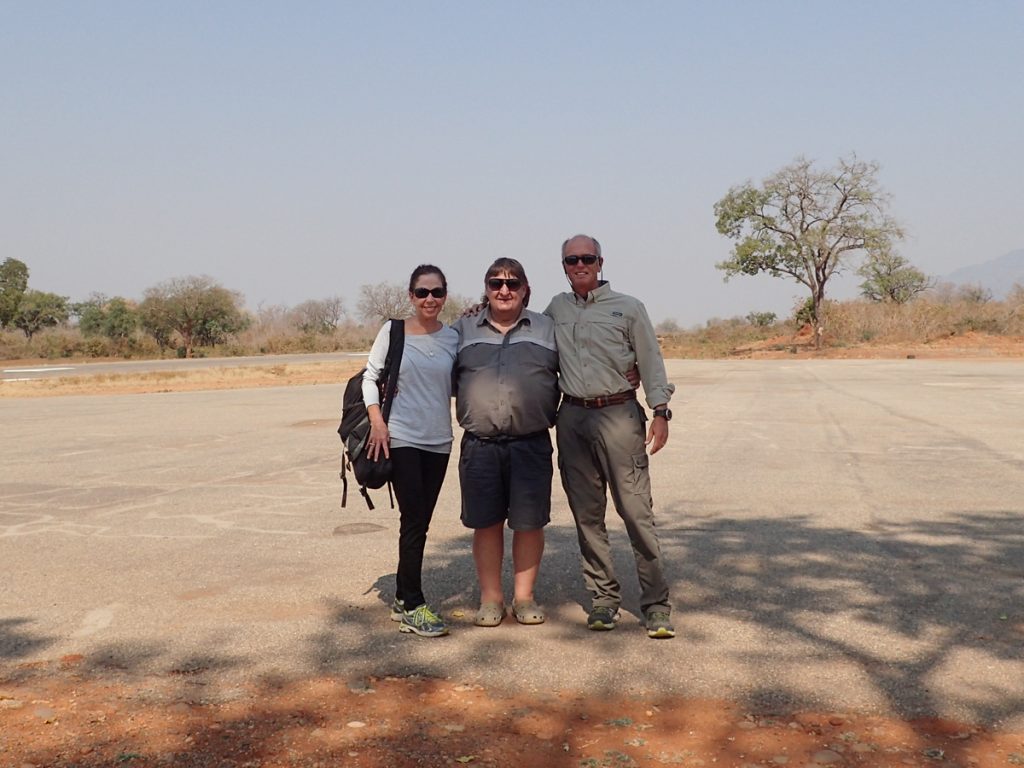 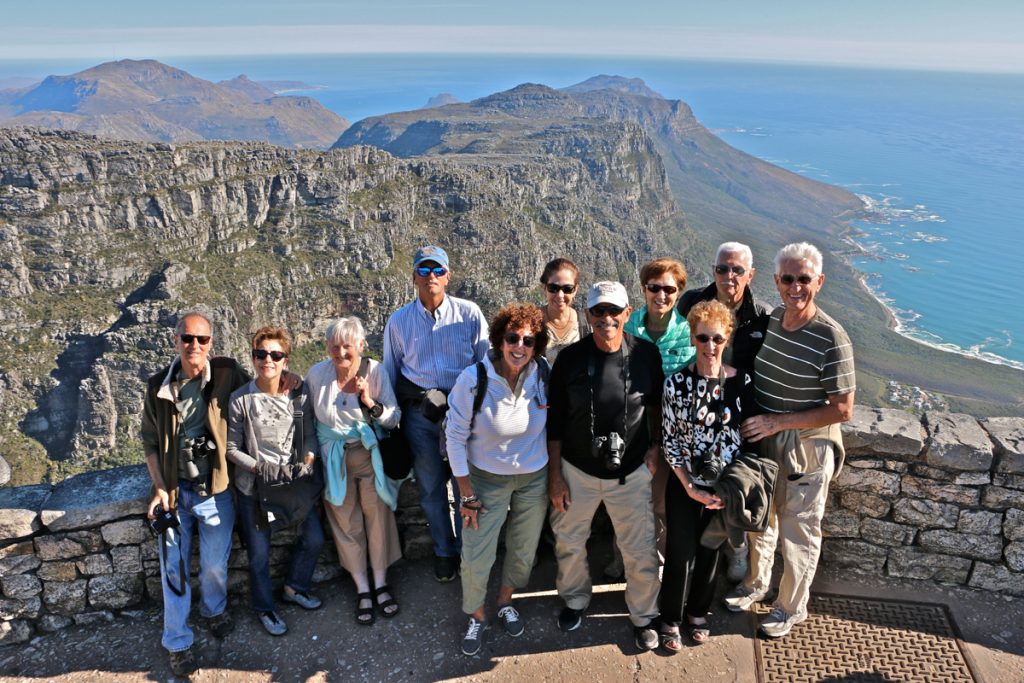 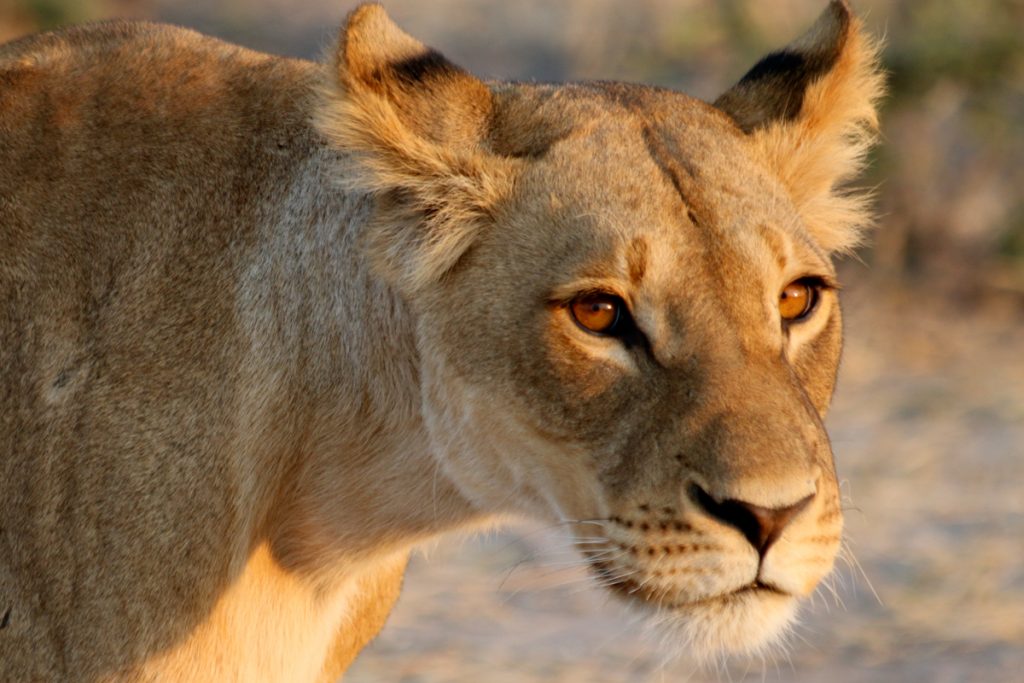 Robin and Cath in the safari jeep

We returned on September 12th and got right back into boating. Two days later we motored over to Newport for the Newport International Boast Show.  Cath’s brother Barry and his wife Rebecca joined us for a day at the show. Newport’s a great town and the show was fun.

Barry looking for a sailboat

A week later Barry and Rebecca joined us onboard for three nights. The weather was perfect and we anchored out two nights.

The day after they left, we packed it in and departed Stirling Harbor Marina and Greenport for the season. Unfortunately for us, the winter plans we had made to travel south to the Caribbean — which included spending Christmas and New Year’s Eve in the Bahamas — were not to be. Hurricane Irma formed three days after we left for Africa. While in the midst of enjoying our safari the Leeward Islands were hit with a category 5 hurricane, the first ever recorded to hit the Leewards. Two weeks after that, Hurricane Maria formed and caused widespread destruction on Dominica and Puerto Rico. The back-to-back hurricanes caused such widespread destruction that we decided to cancel all of our winter boating plans.

Our original plans had us stopping at Atlantic Yacht Basin in VA for three or so weeks of routine maintenance before continuing on south to the Bahamas. Instead, we decided to just park Big Smile at their yard for the winter and spend the entire season in VT. It was a disappointing but necessary turn of events.

After leaving Greenport for the last time, we motored across the Long Island Sound to Essex, CT, on the Connecticut River. We last were there in 1990 on our 34′ sloop. Essex is one of many historic towns in New England. If you like American history as I do then you would love Essex. A short walk up from the waterfront sits the Griswold Inn. One of the oldest continuously operated inns in the country, it first opened its doors in 1776. We had dinner there of course. Lots of history inside.

Entrance to Connecticut River appearing out of the fog 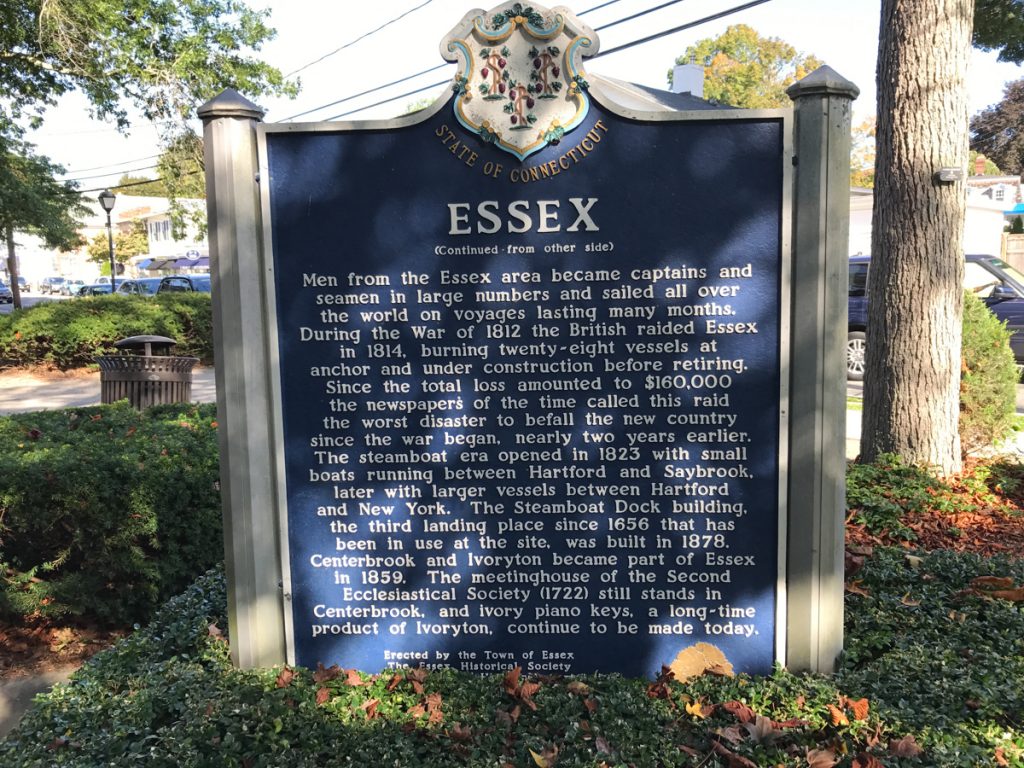 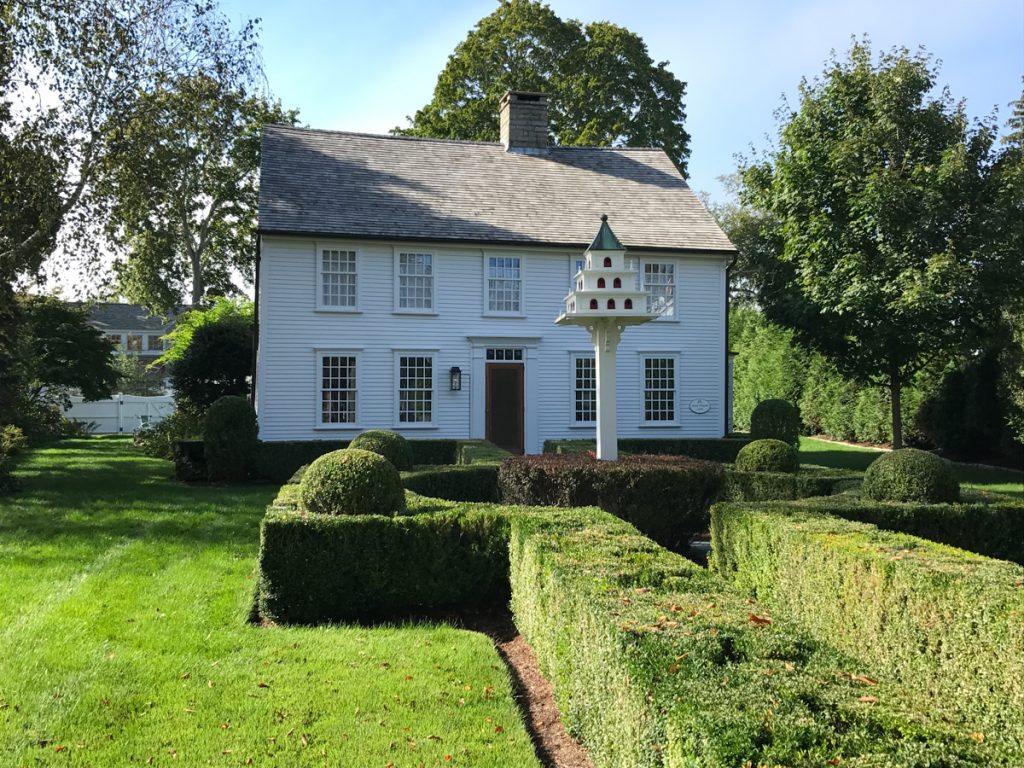 While in Essex, we launched our dinghy and took a scenic 20-mile ride up the Connecticut River.  On our way we passed the Gillette Castle, a very unusual 24-room, 14,000-square-foot structure. Originally built by the actor William Gillette between 1914 and 1919, it was his home until 1937. The state of Connecticut purchased it in 1943 and renamed it Gillette Castle.

We made three overnight stops on the north shore of Long Island after leaving Essex before transiting the East River and New York Harbor for an overnight run to Cape May. 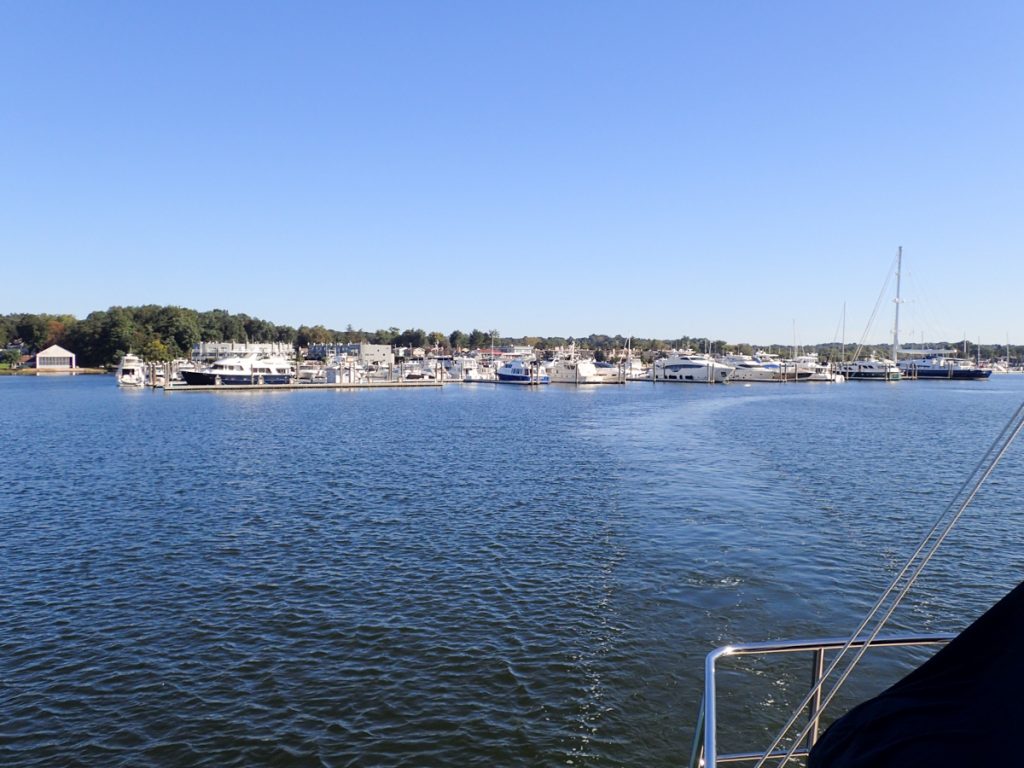 We left Port Washington at 9:30 AM in order to make Hell Gate as ebb was beginning. Given our typical cruising speed of 7-8 knots, it’s important to have the 4 knot current with us and not against us. We roared thru Hell Gate at 11 knots and hit 12.5 knots on the East River. We quickly made our way to lower Manhattan and out into New York Harbor. 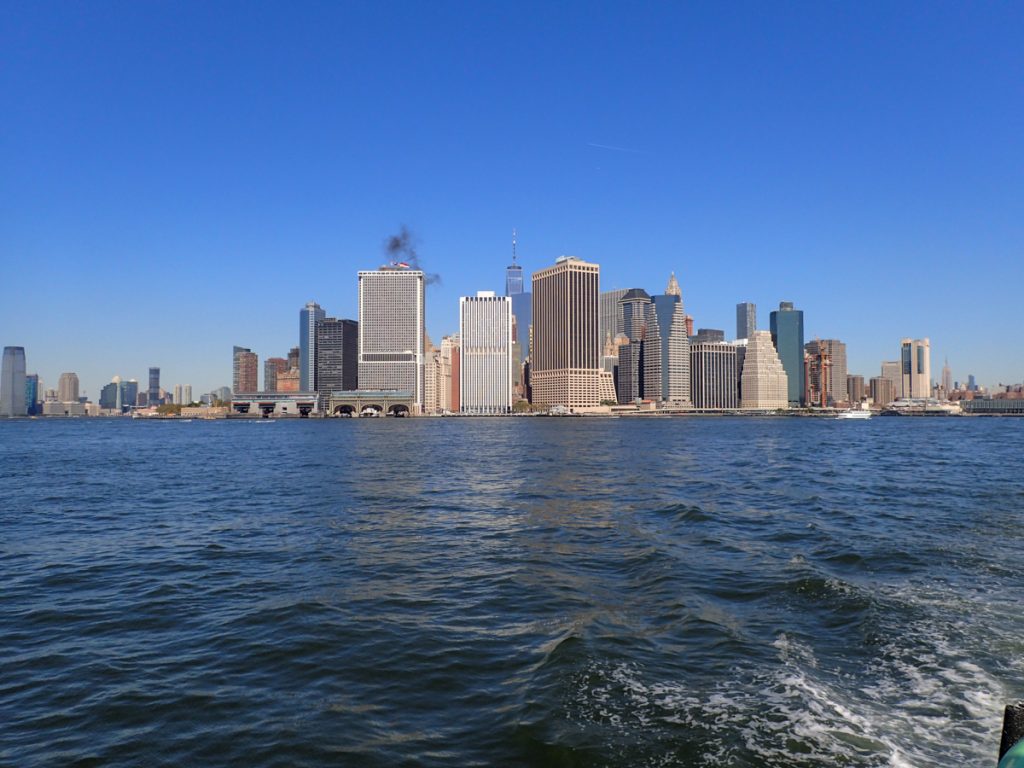 We exited New York harbor around 1:00 PM and after a beautiful and uneventful cruise down the NJ coast, we approached Cape May inlet shortly after sunrise. 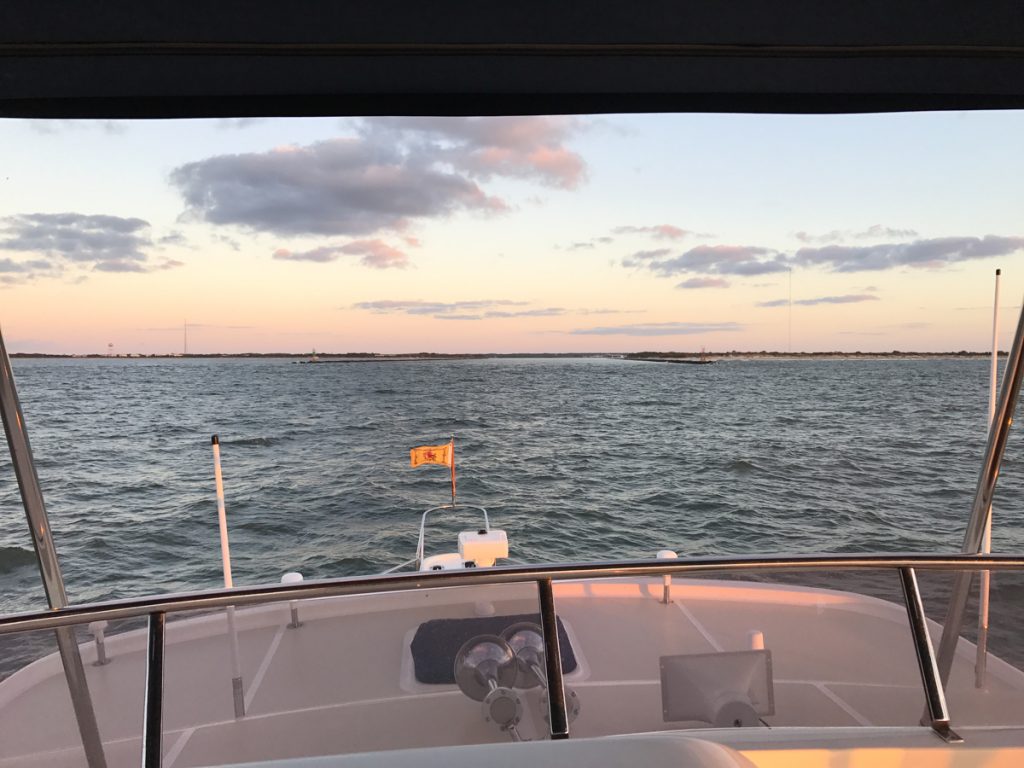 A one night stop at South Jersey Marina gave us plenty of time to walk around Cape May. We love this town for short stops. 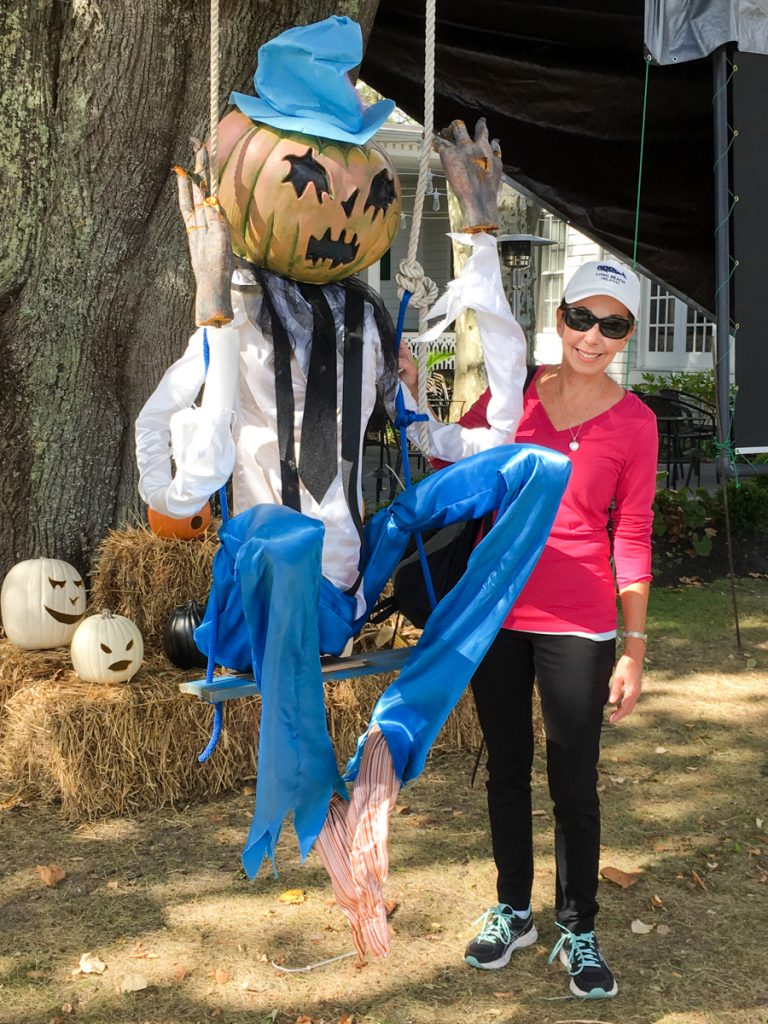 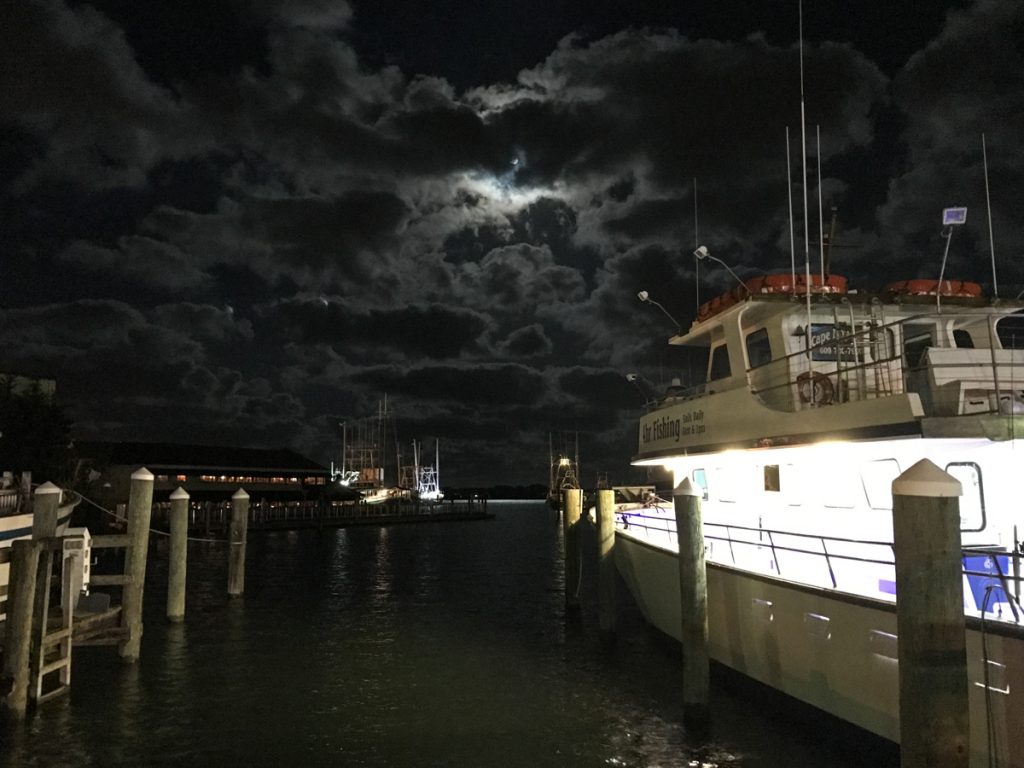 Anyone that’s cruised Chesapeake Bay knows there are many rivers, creeks and bays to drop a hook for a night or three. Our first stop after leaving Cape May and transiting the C&D Canal was on the Sassafras River on the eastern shore of MD. Georgetown lies 8 miles up the Sassafras and since we’d never been there before, we decided to give it a visit. It turned out to be very underwhelming, however, the two anchorages we chose were delightful.

So we left Georgetown and headed for St. Michaels, a fun, historic town we first visited decades ago. As we pulled into the anchorage close to town we noticed a Selene up ahead so we decided to drop the hook right behind them. Shortly after anchoring, I received an email from another Selene owner who saw us come in. Then another Selene pulled in to the anchorage. All in all, there were four Selenes within shouting distance, so we invited everyone onboard for cocktails. In our 5-1/2 years on Big Smile, this is the first time this has happened and all by chance. Needless to say, it was an enjoyable impromptu get-together.

Three Selenes in a row: Big Smile, Makarios, Evening Song, with Sauvy B out of the shot to starboard

To our good fortune, the Chesapeake Bay Maritime Museum in St. Michaels was hosting the Mid-Atlantic Small Craft Festival that weekend. Scores of small wooden sailing skiffs, kayaks, prams, canoes and one-of-a-kind boats were on display and competing on the water.  It was quite a sight watching them jockey for position all around our anchorage.

Perfect day for a race

Up the Chester River is the historic town of Chestertown. We visited there last year and were happy to return. This time we walked thru the campus of Washington College. A small liberal arts school, Washington College was chartered in 1782. George Washington supported the founding by allowing the “College of Chester” to be named in his honor.  It was the first college chartered after America’s independence.

While dinghying back from town we met and towed back to his boat a real Canadian Mountie. Normand Vallee is a retired mountie and his beautiful classic trawler is named “Real Mountie.” 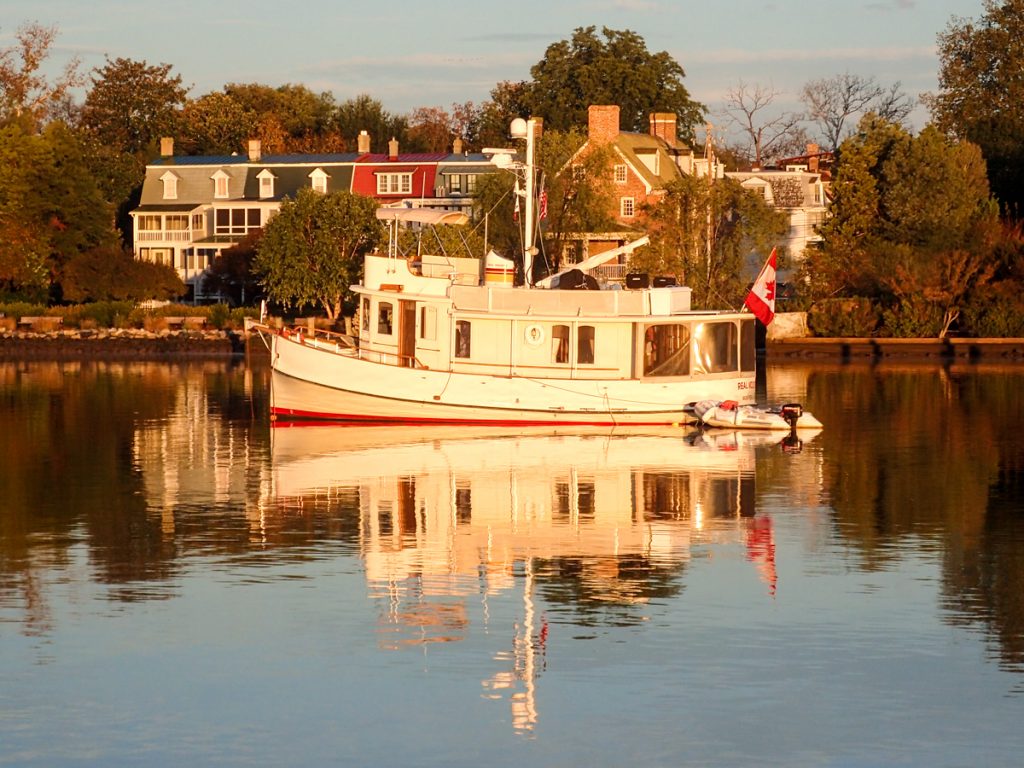 We were getting close to the end of our 2017 travels. Annapolis beckoned us next so we could attend their annual boat show and also get together with our kids in DC. Annapolis is always a great town to visit but it was the new waterfront in DC that really piqued our interest. We stayed at the Capital Yacht Club a few years ago and since then a huge redevelopment project has taken place. We grabbed a hotel room on Hotwire and our son picked us up for the weekend. He lives near Dupont Circle, not too far from the Potomac. As we walked down to the water we were astounded by the amount of construction going on and amazed at the transformation of the waterfront.  Fortunately, despite all the changes, they managed to keep DC’s wonderful riverside fish market completely intact.

Cath, Tara and Andrew at the fish market

Portion of the new waterfront

Our four days in Annapolis were complete. It was time to make the last push for Atlantic Yacht Basin. The weather was cooperating although temps had dipped. We had two last nights at anchor to enjoy the bay and the solitude. 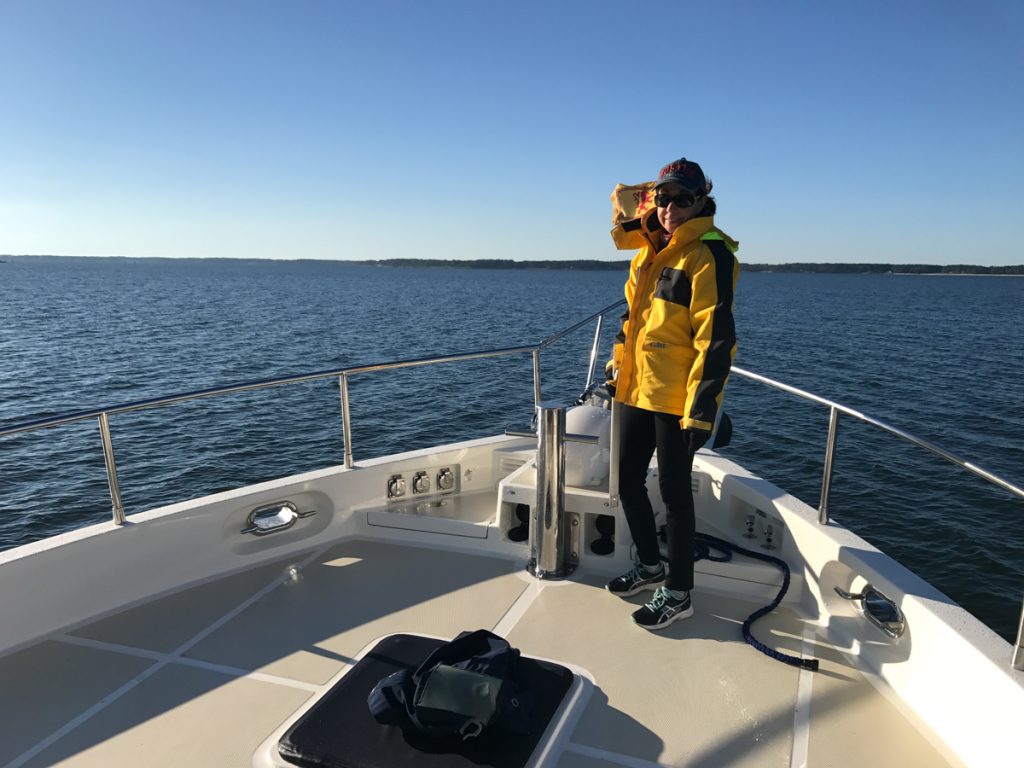 Atlantic Yacht Basin lies just past the Great Bridge Lock and Great Bridge Bridge.  Just before noon on October 19th we sidled up to their long face dock and began the process of closing up Big Smile. AYB had some maintenance work to perform and would then park her under one of their very tall, covered sheds for the winter. 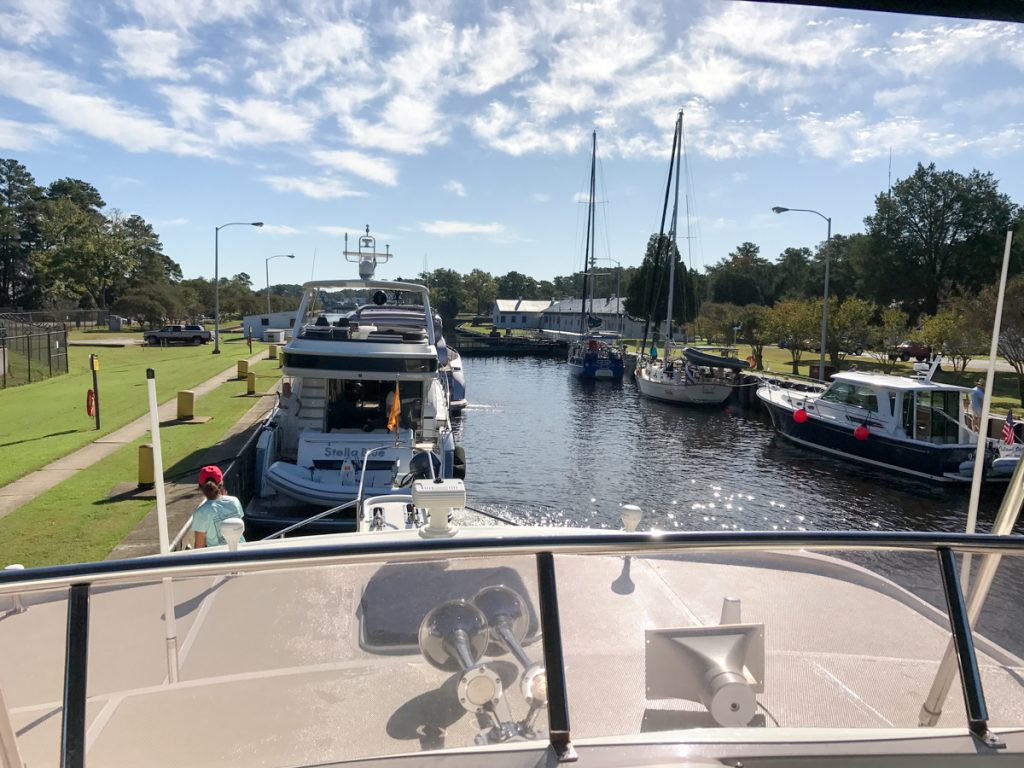 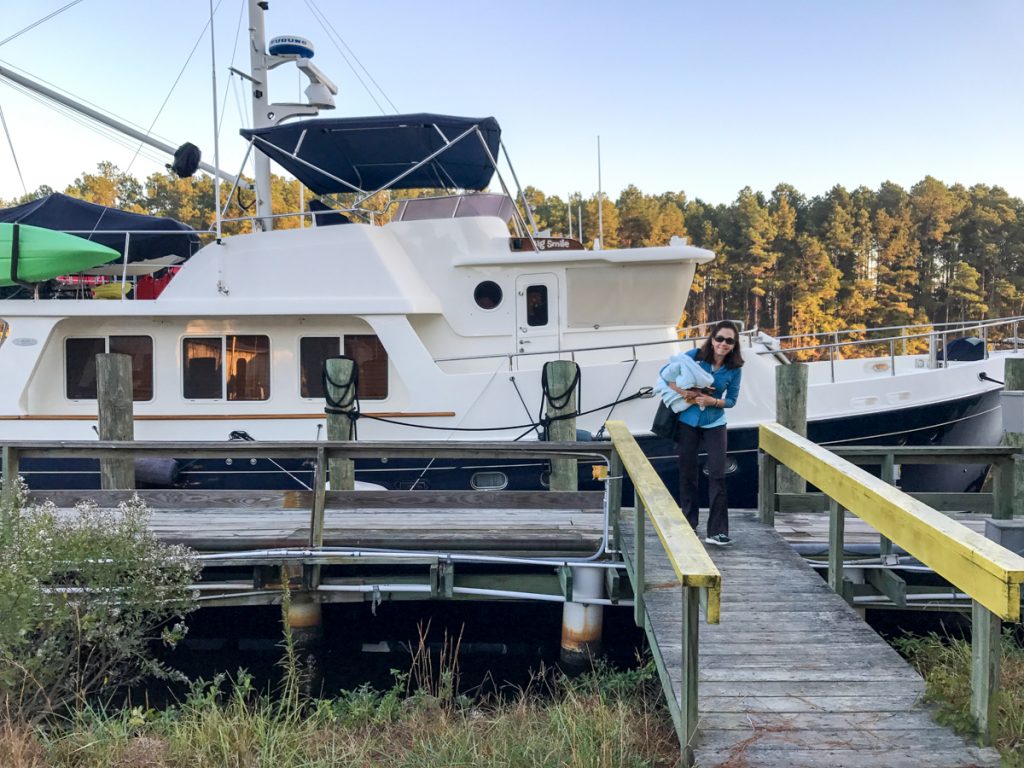 The last item off the boat

As we headed north to VT, we discussed what our plans might be for 2018. The hurricanes of 2017 derailed our Caribbean winter and we thought it would take a couple of years for the islands to rebuild.  Getting to the Pacific Northwest was always a goal of ours but it wasn’t going to happen until after we cruised the Caribbean in our own boat.  But now our timeline had changed.  We had already decided we would not bring Big Smile to the PNW on her own bottom, so upon our return to VT, I started contacting the few shipping companies that specialize in moving yachts around the world. Yesterday, Cath’s birthday, I wired a 25% deposit to United Yacht Transport. Big Smile would be heading to Port Everglades, FL, in April to be be loaded on a ship. Approximately 28 days later, she’ll be hoisted off and deposited in the waters of Victoria, British Columbia and ready for our next adventure on the Pacific coast.

Lots to think about this winter.  Cheers!