The overnite trip from Venice to the Dry Tortugas was bumpy but uneventful. With the wind and seas on our nose we hobby horsed for 24 hours but towards sunset it subsided a bit. We actually made better progress than expected so at around 4AM I backtracked for an hour allowing us to arrive at daybreak and not in the pitch black.

The Dry Tortugas, approximately 70 miles west of Key West, is a group of seven islands and protected coral reefs. In 1513, the Spanish explorer, Juan Ponce de Leon was the first European to discover the islands. He named them Las Tortugas (The Turtles) because of all the turtles his men took. Soon Dry replaced Las on the charts indicating that no fresh water existed. The name is the second oldest surviving European place-name. Florida was first.

In 1846 the United States started construction on Fort Jefferson. Located on Garden Key, it is the largest all-masonry fort in the United States. Construction stopped in 1875 and the fort was never completed. Originally designed and built to protect the nations gateway to the Gulf of Mexico it never once fired a shot in battle. It served numerous functions over the years including use as a prison. Dr Samuel Mudd, the doctor who treated John Wilkes Booth, was imprisoned there until 1869. It remained in Union hands throughout the Civil War.

Rich in maritime history, the Dry Tortugas claimed the Spanish treasure fleet during a hurricane in 1622. The treasure hunter Mel Fisher discovered the Nuestra Senora de Atocha, the most famous of the Spanish fleet that sunk in 1622. The discovery yielded $450 million in treasure, including 114,000 “pieces of eight”, 40 tons of gold and silver and many other artifacts and emeralds.

Today the fort is part of the Dry Tortugas National Park. There are only a couple of designated anchorages and, short of having your own boat, access is available only by ferry or seaplane. There are some campsites outside of the fort but no other lodging. We had the pleasure of anchoring for three nights. Our anchorage spot was in the landing path of the two seaplanes that arrive and depart four times per day at the same time each. It was fun to watch them come and go only 75-100 feet from us.

Landing on our port 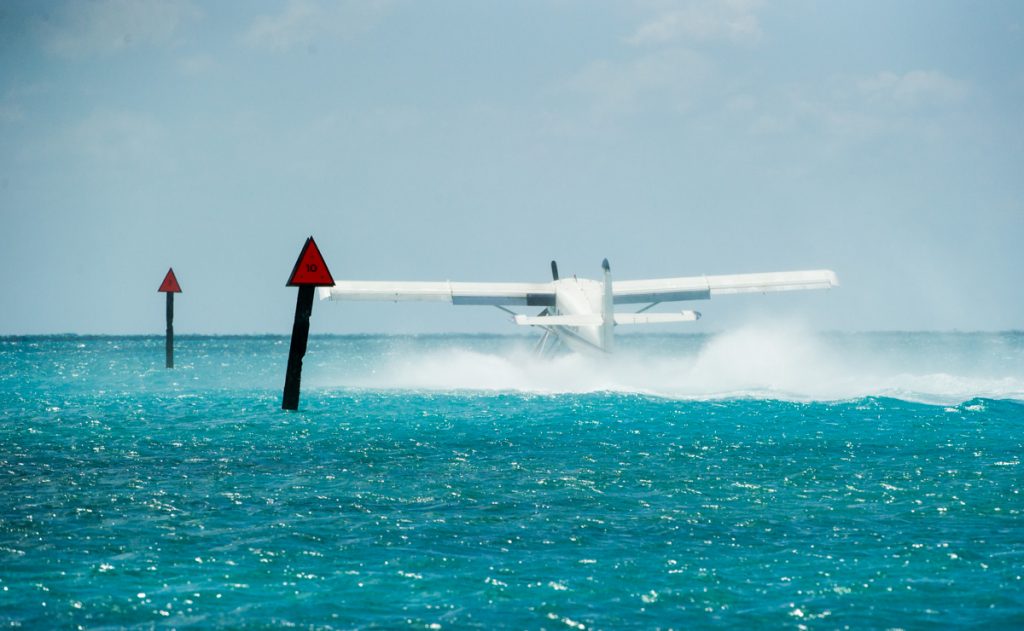 Taking off down the channel 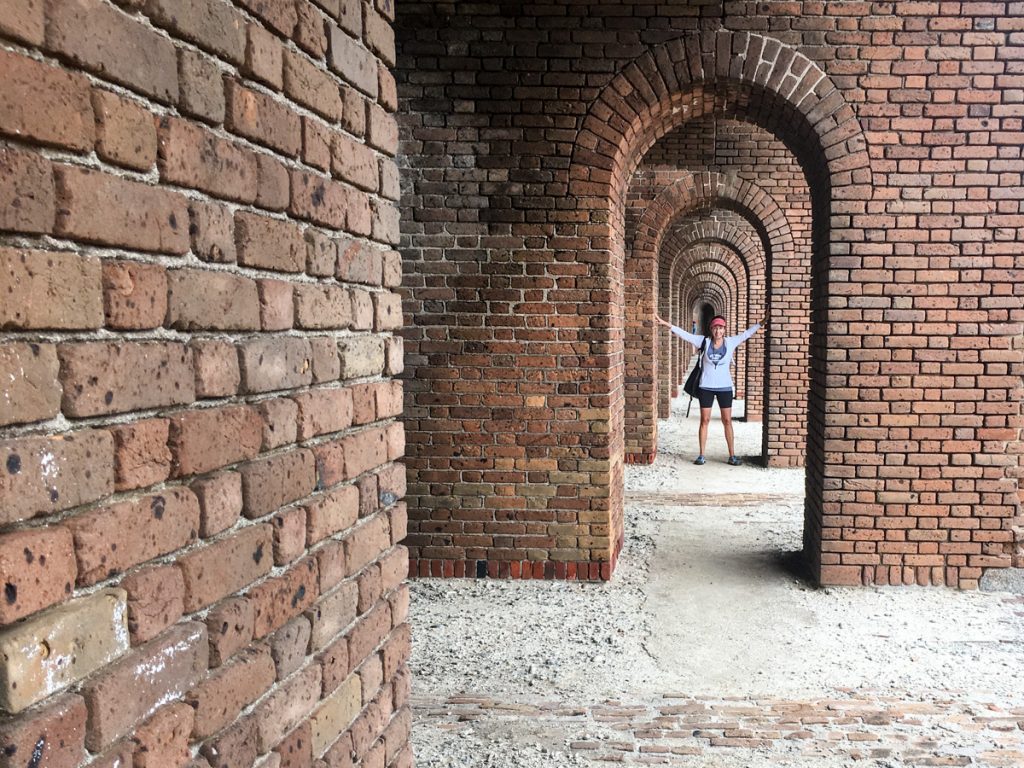 Cath holding up some of the 16 million bricks 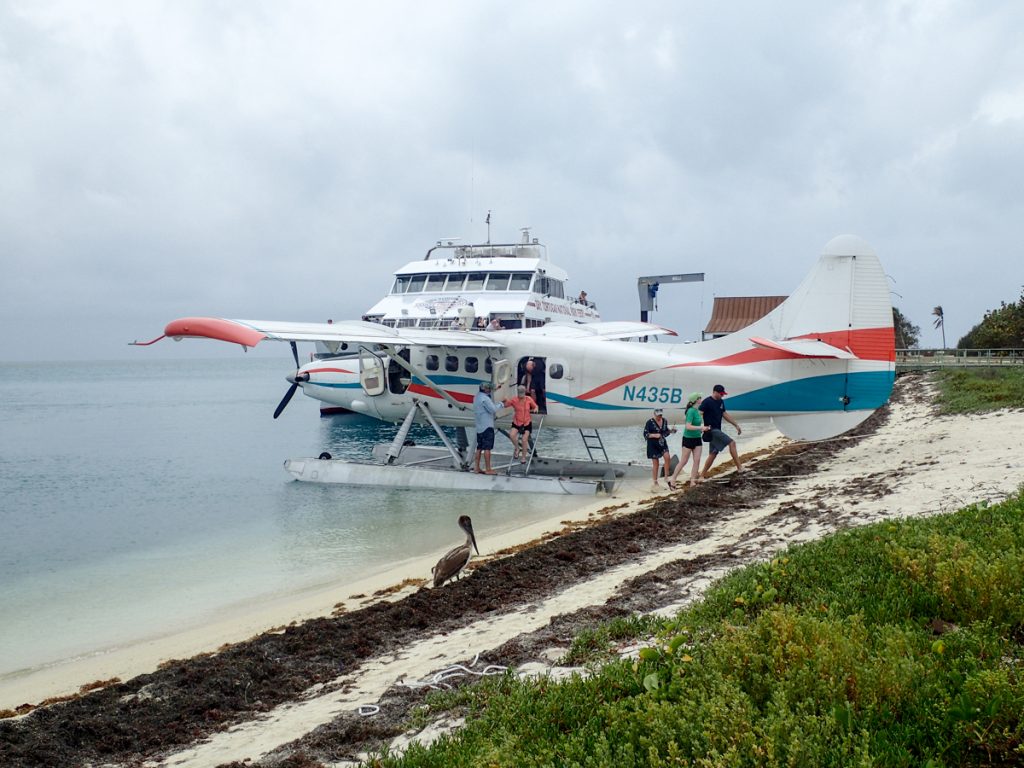 Offloading a seaplane with Tortugas ferry in the background 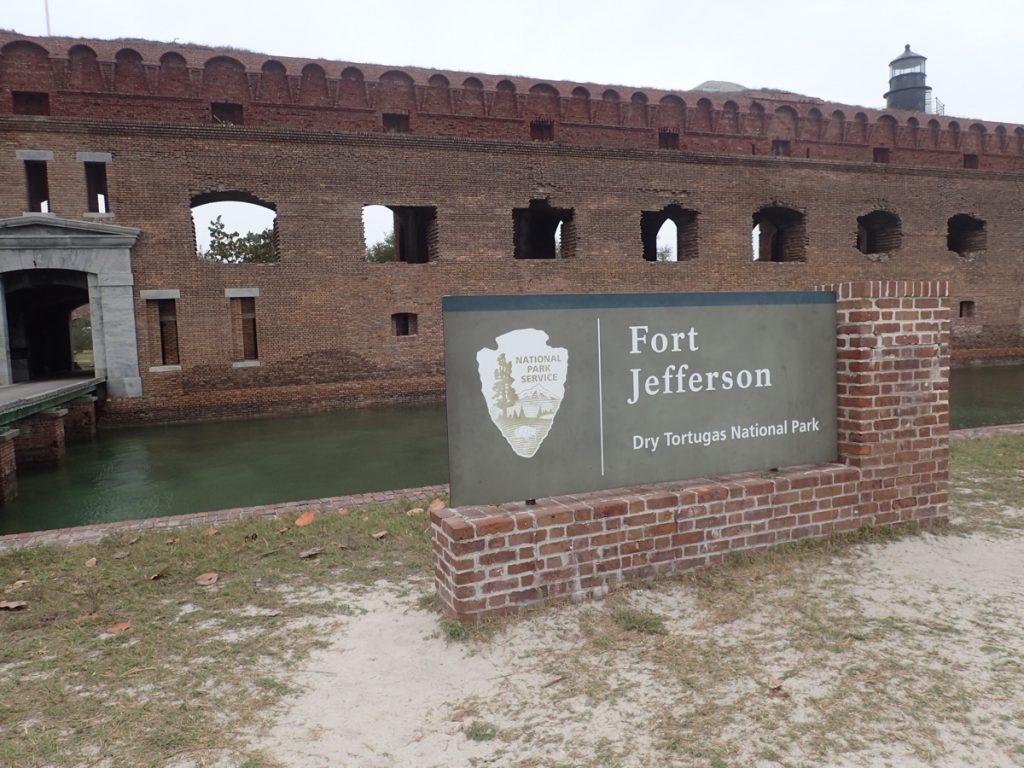 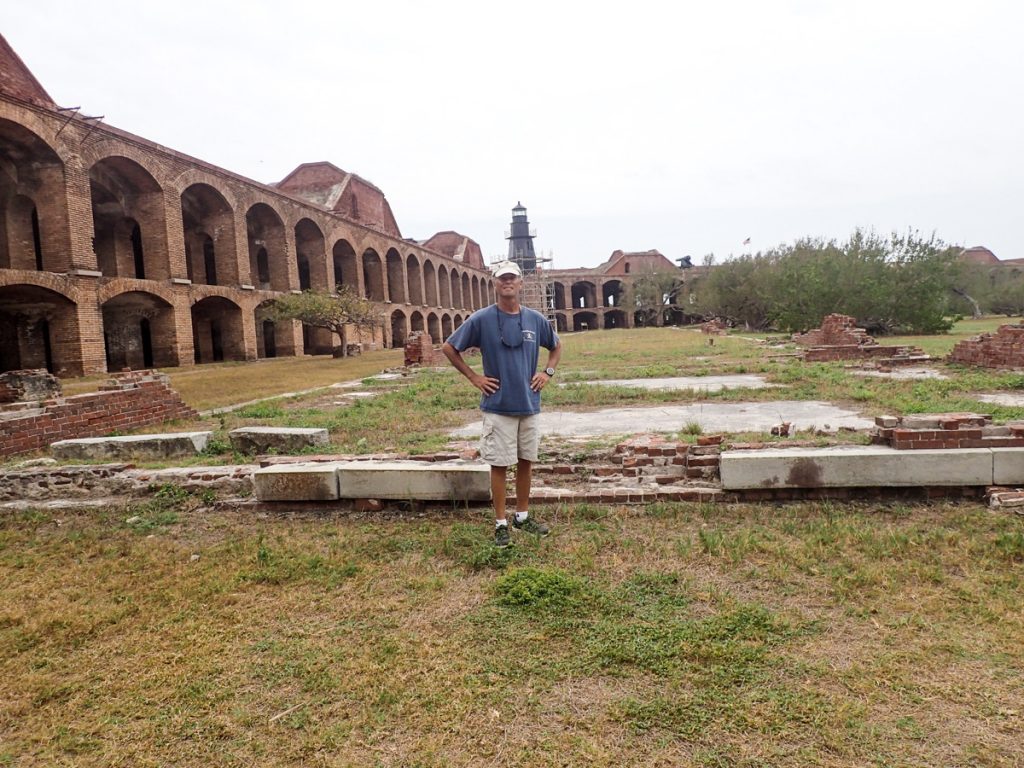 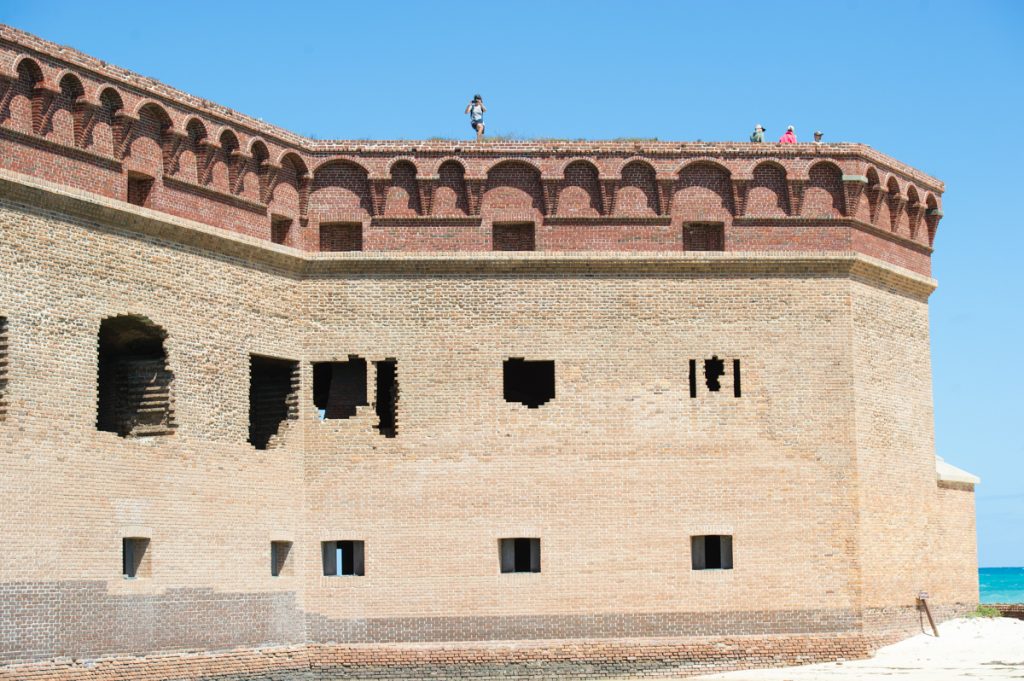 Cath on top of Fort Jefferson

Three miles to the west of Garden Key is Loggerhead Key. We thought it was uninhabited when we took the dinghy over to visit the lighthouse and beautiful beaches. It turns out that volunteers are on the island for a month or so at a time to “keep everyone honest” as the current volunteers told us. We met a wonderful retired couple from Colorado who had just arrived several days earlier for their month tour of duty. They had retired from the park service and volunteered for this work. They live in a small, solar powered house and tend to the islands needs and protect the history, lighthouse and beaches. 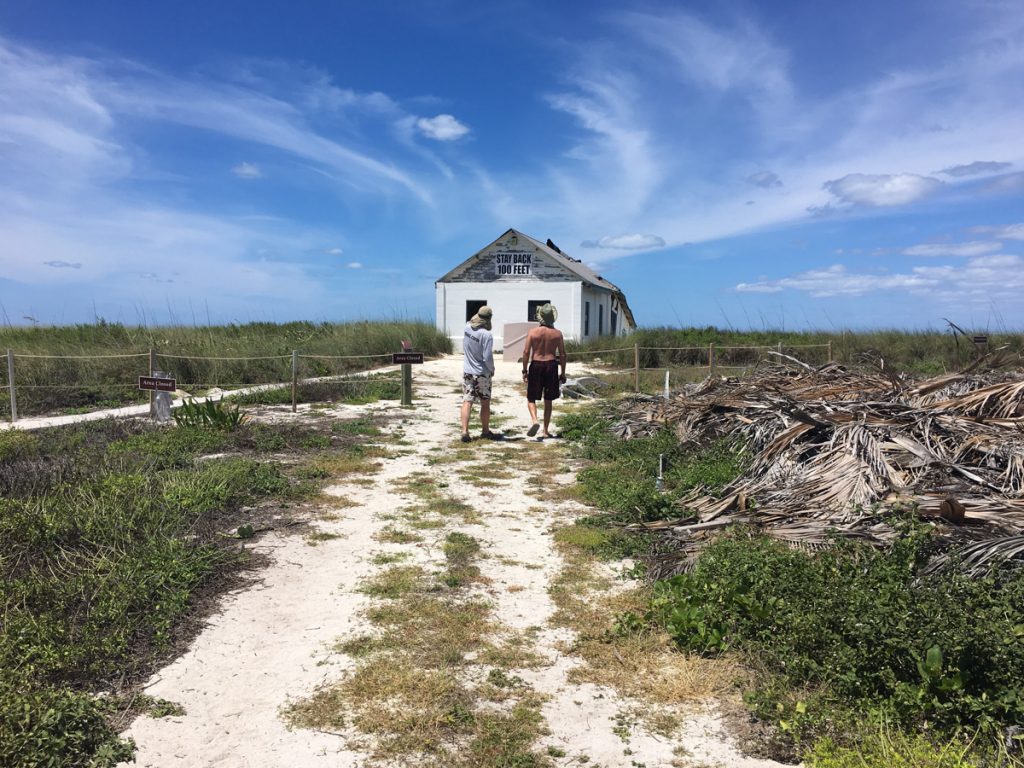 The volunteer showing me the old Coast Guard shed 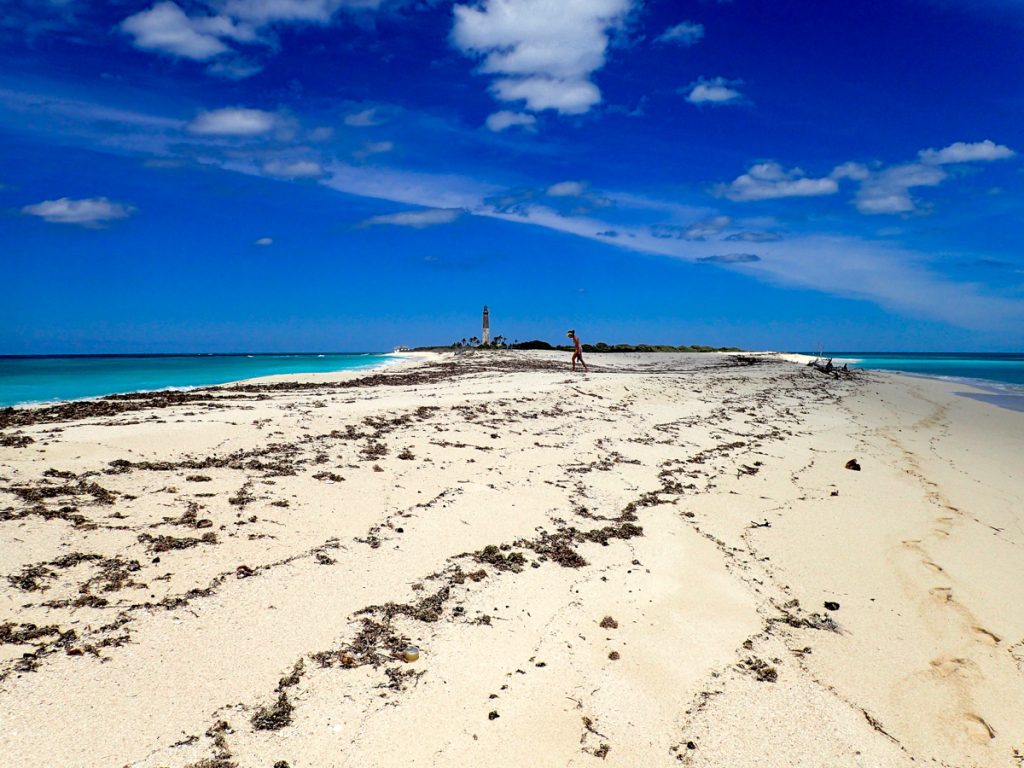 Exploring the deserted and beautiful beach 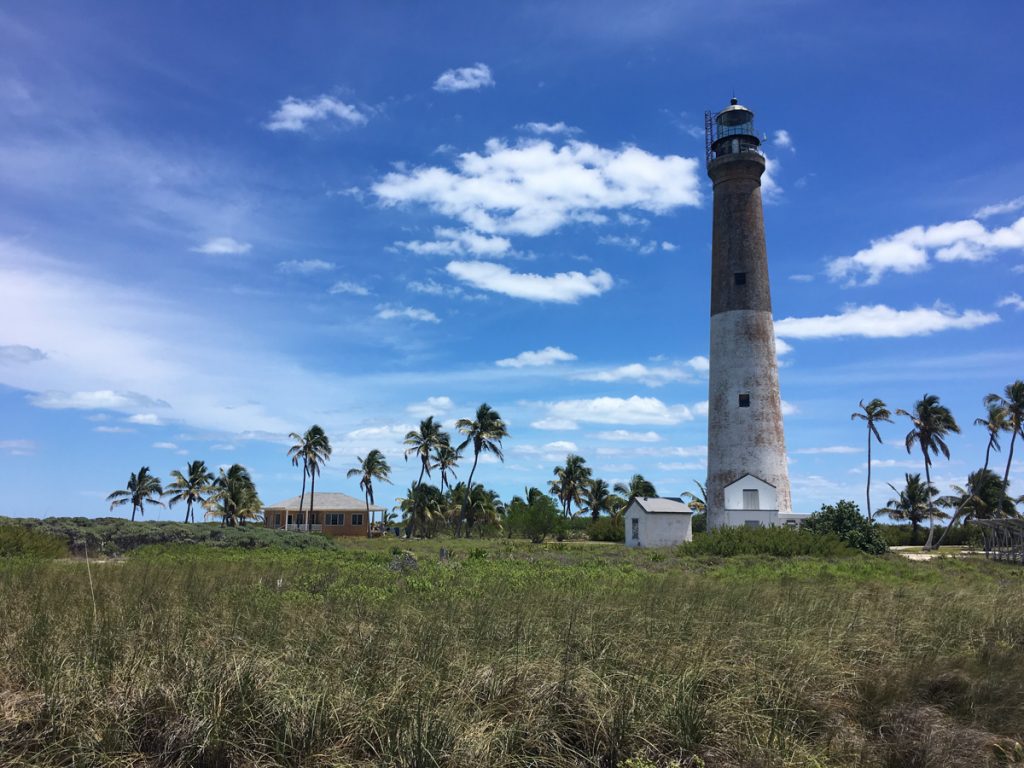 The lighthouse and volunteers home 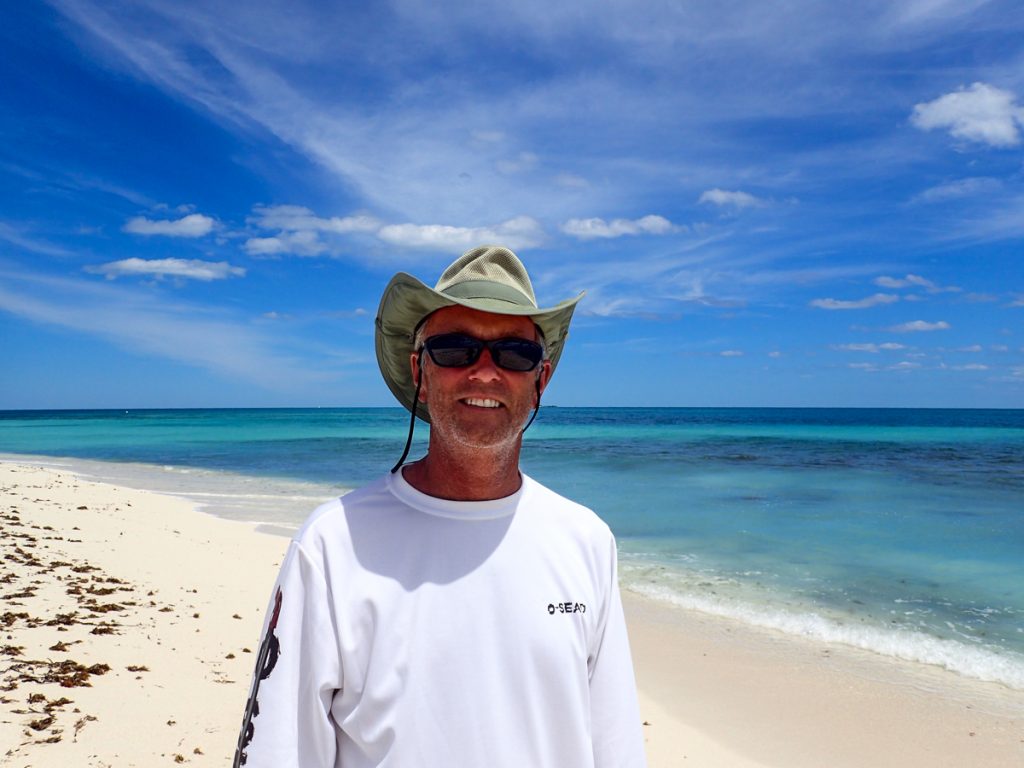 Loggerhead Key: Where is everyone?

Visiting by our own boat provided benefits that we very much appreciated. We didn’t have to rush or meet a ferry schedule and we were able to visit by dinghy and kayak other inaccessible areas of the park.

The Dry Tortugas are also known for its birds. Tens of thousands migrate thru but only 7 species nest in the area regularly. After journeys of 100’s of miles many birds are completely exhausted. 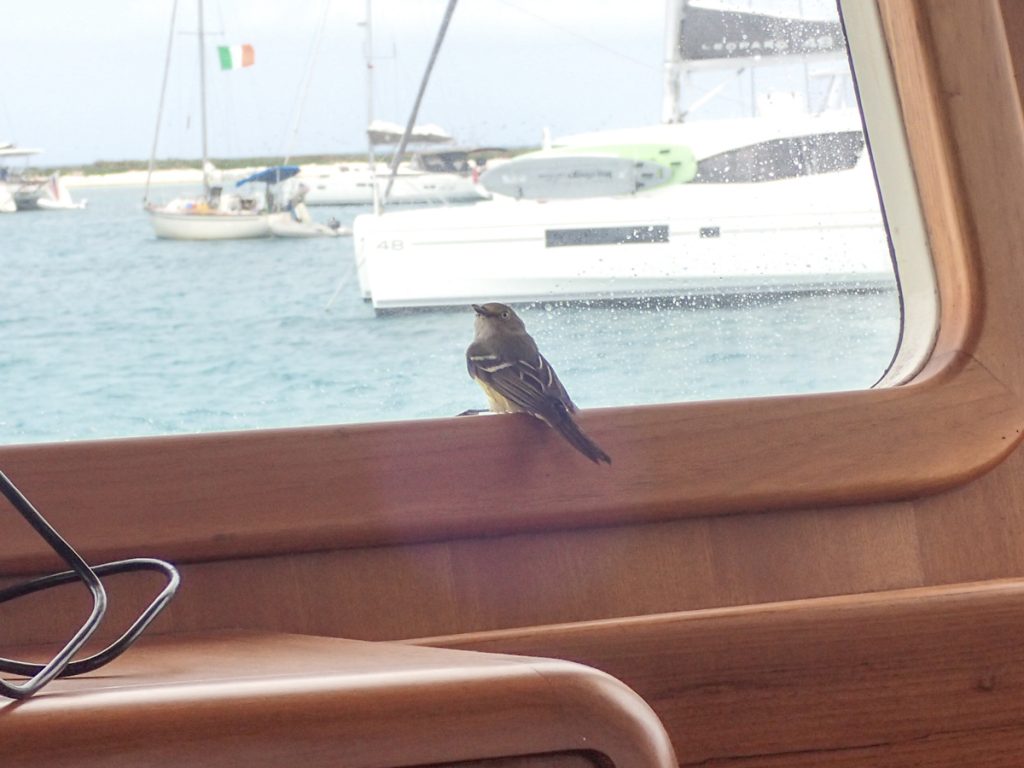 This one landed in our pilothouse

And this one landed on the dock and would not move.

On our last evening at anchorage we finally encountered Goliath Grouper. While basically harmless they are huge. I didn’t like sticking my arm off the stern with the waterproof camera to take the shots below. Ugly but exciting to see.

It’s been quite awhile since the last post. It is April 1st, and we have one more full day at Longboat Key Marina. From here we head to Venice for two nights then on to the Tortugas for several days followed by Key West. While Big Smile did not move since our arrival in December, we went back and forth to Vermont a couple of times for some skiing and winter fun. We also managed to get to Smugglers Notch early in January to use our time share.

Vermont: The winter was weird this year. Last year was pretty much devoid of snow. This year we got dumped on early and the season looked very promising. The weather dried up for awhile, Stratton kept the snow guns going and finally more natural stuff came down. Over all a decent season with quite a bit of late season whiteness, most of which we missed as we were in Florida. Stratton was crowded though and I think they had a good year.

Smuggs had some snow. Our friends Pete and Kathy joined us for the week and we had some good conditions and cold, sunny weather.

Top of Smugglers Notch; Stowe in the background 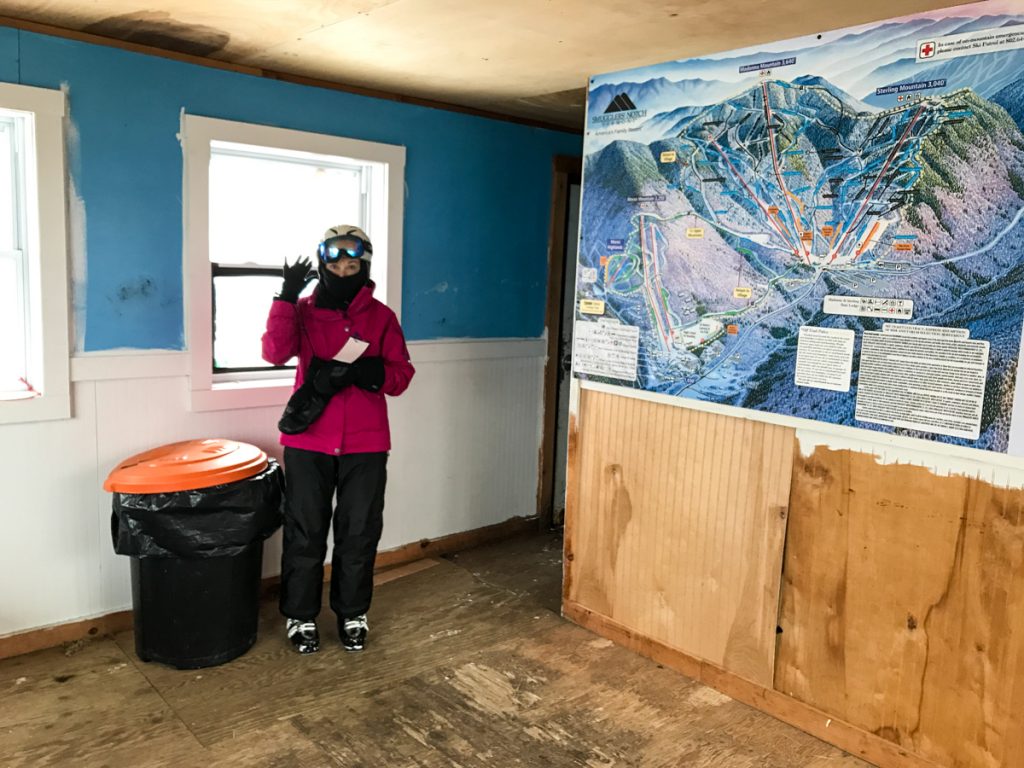 Tasting at The Alchemist

The Alchemist Brewery, located in Stowe VT is legendary. It’s signature beer, Heady Topper, was rated number 8 in the US and Vermont and is ranked number 1 in Craft Breweries per Capita. Hill Farmstead Brewery is another top brewery. So if the snow is poor you can always find a great beer to drink.

We had a number of friends up to visit and ski. As always, it was fun.

Carol and Cath and the Vermont Country Store 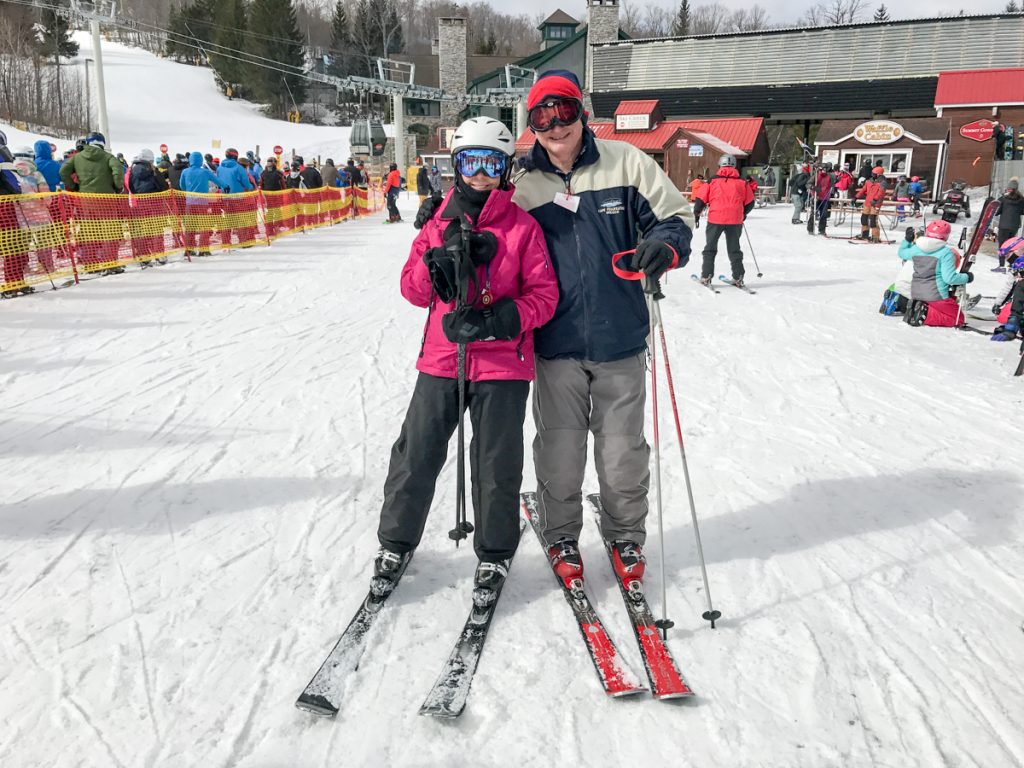 Cath and Dennis at Stratton 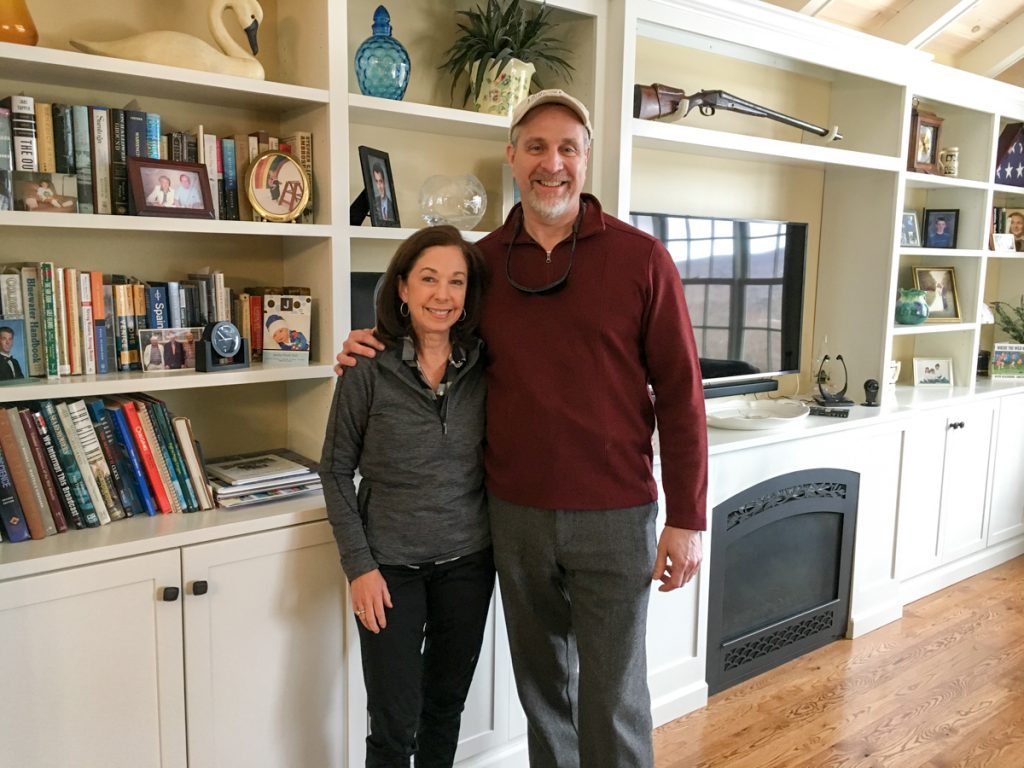 We are also very lucky to have a wonderful neighbor who not only walks with Cath but keeps an eye on our house when we are gone. 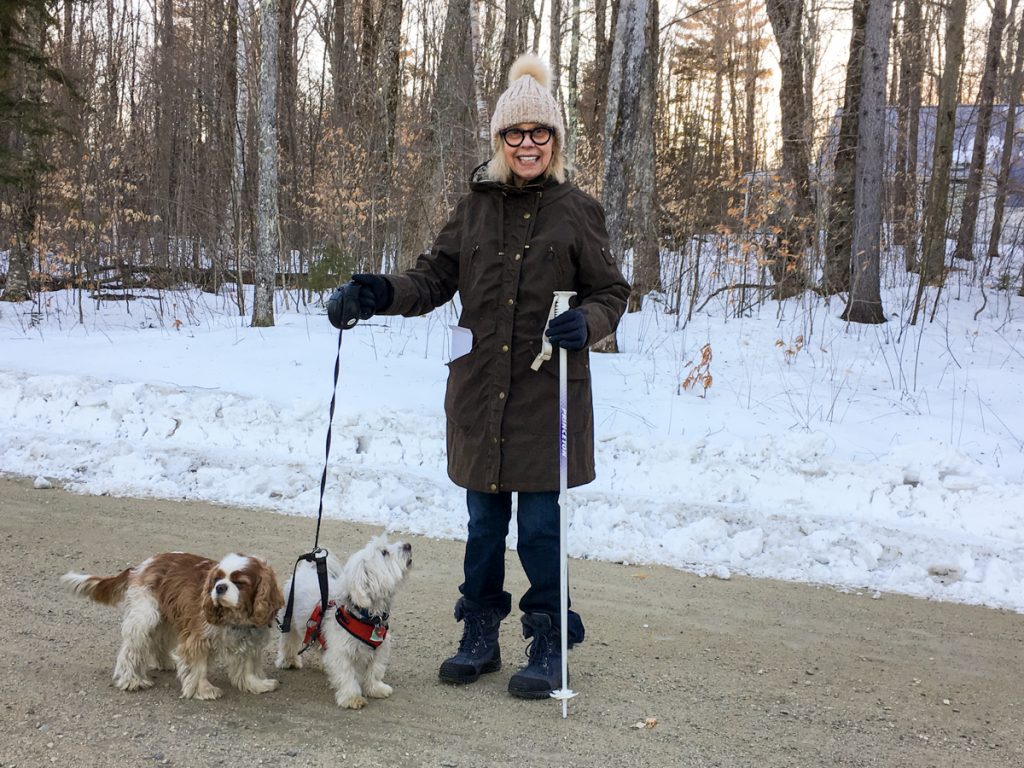 One of my friends from my Stratton volunteer work leads a band called Washington County Line. In late February they played a charity gig at Dorrs Music Barn. Several of us Stratton couples joined the local crowd for three hours of awesome Bluegrass and dancing. While Stratton was under-represented on the dance floor there were some incredible two-step dancers on floor. Our friends Carol and Dennis, who were visiting from NC, had a blast. 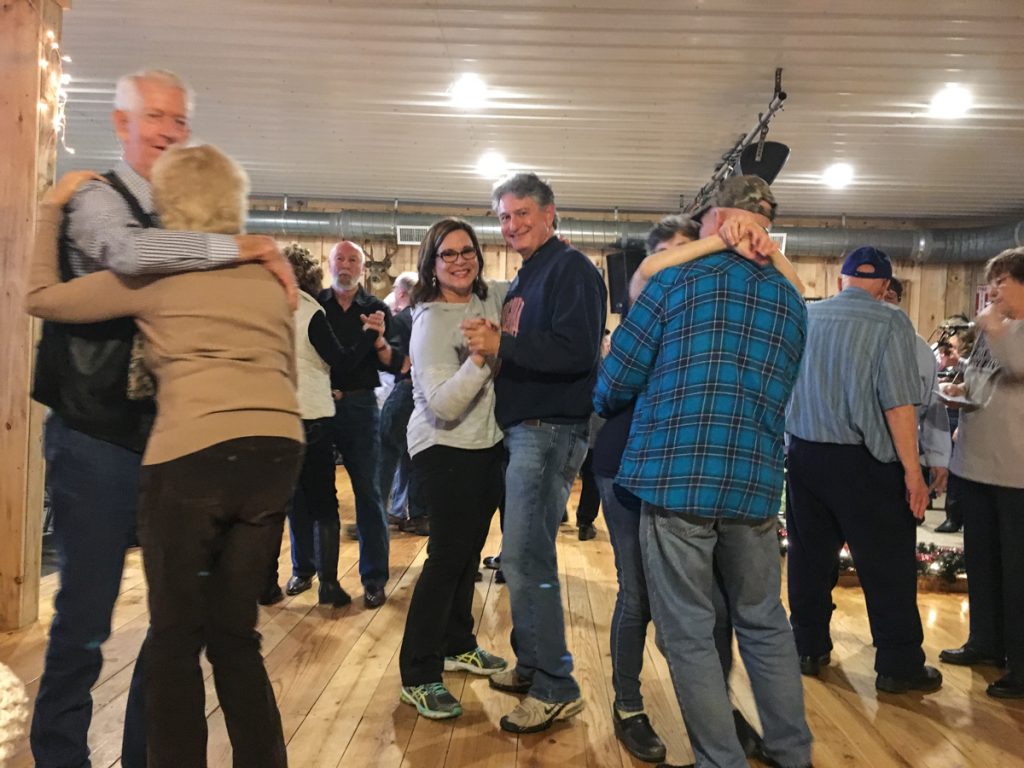 Carol and Dennis doing the two-step 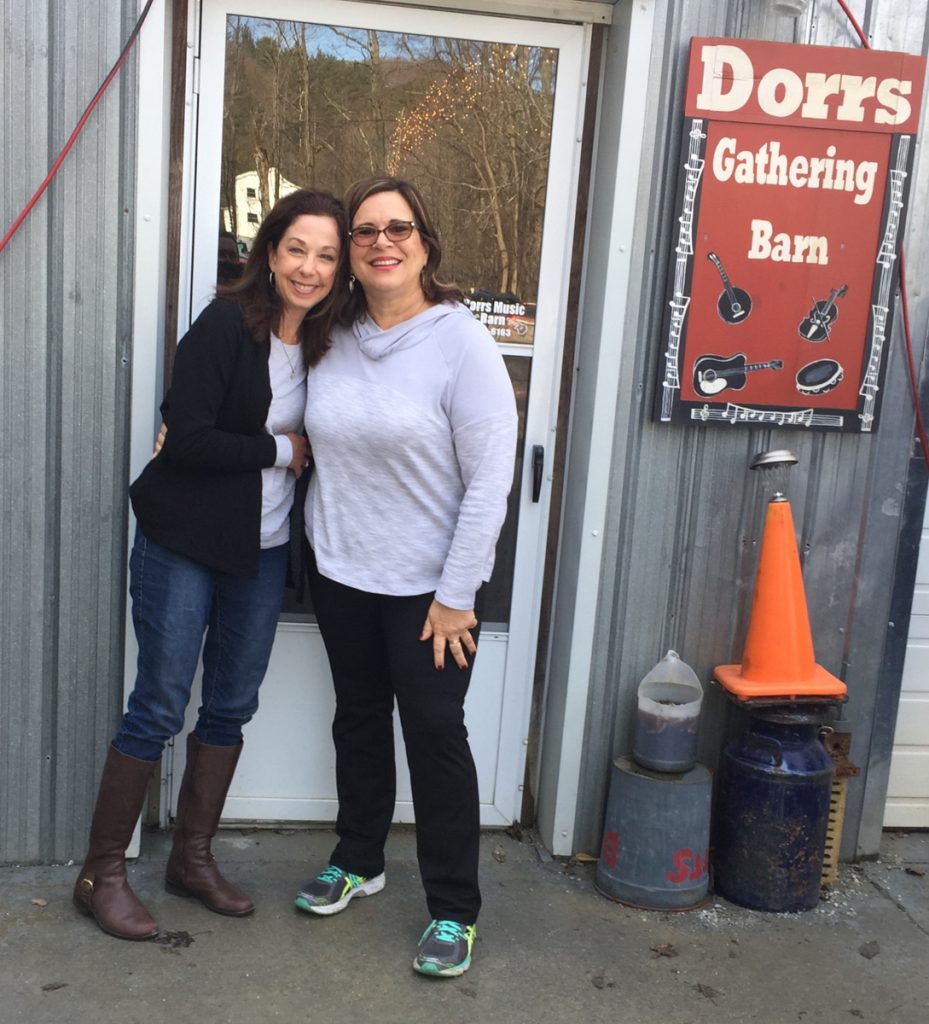 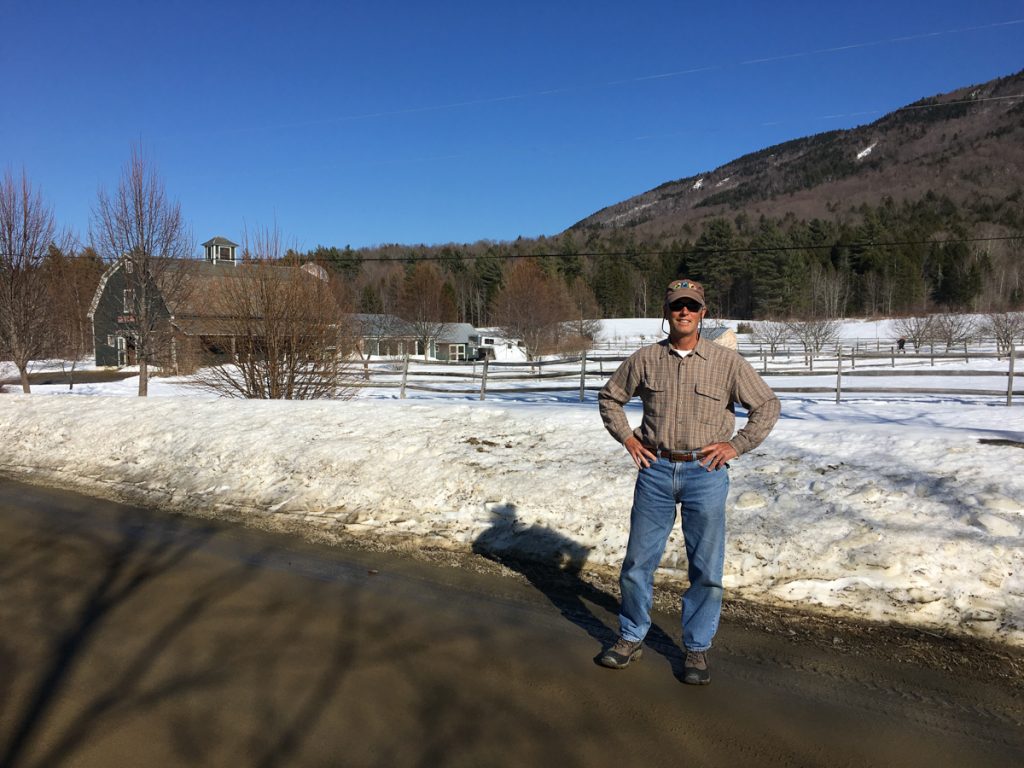 A warm late February day with Magic Mountain in the background

Florida: We left Big Smile at Longboat Key Marina in late December. We finally returned on January 23rd for three weeks of Florida sun. Longboat Key Marina is really a complete resort. With dozens of tennis courts, numerous restaurants, golf courses and a fabulous beach it is the nicest marina we have ever been to. We really enjoyed and appreciated the city of Sarasota. It is the cultural capital of the west coast of Florida. We especially enjoyed the Van Wezel Performing Arts Hall. We managed to see three shows: Riverdance, Gladys Knight, and the Nitty Gritty Dirt Band. We had tickets for two others. Frankie Valli got sick and postponed his show till the spring. “Once The Musical” we missed because a blizzard hit New England on the day we were to leave Vermont. Thousands of flights were cancelled and we could not reschedule for five days and thus missed the show. 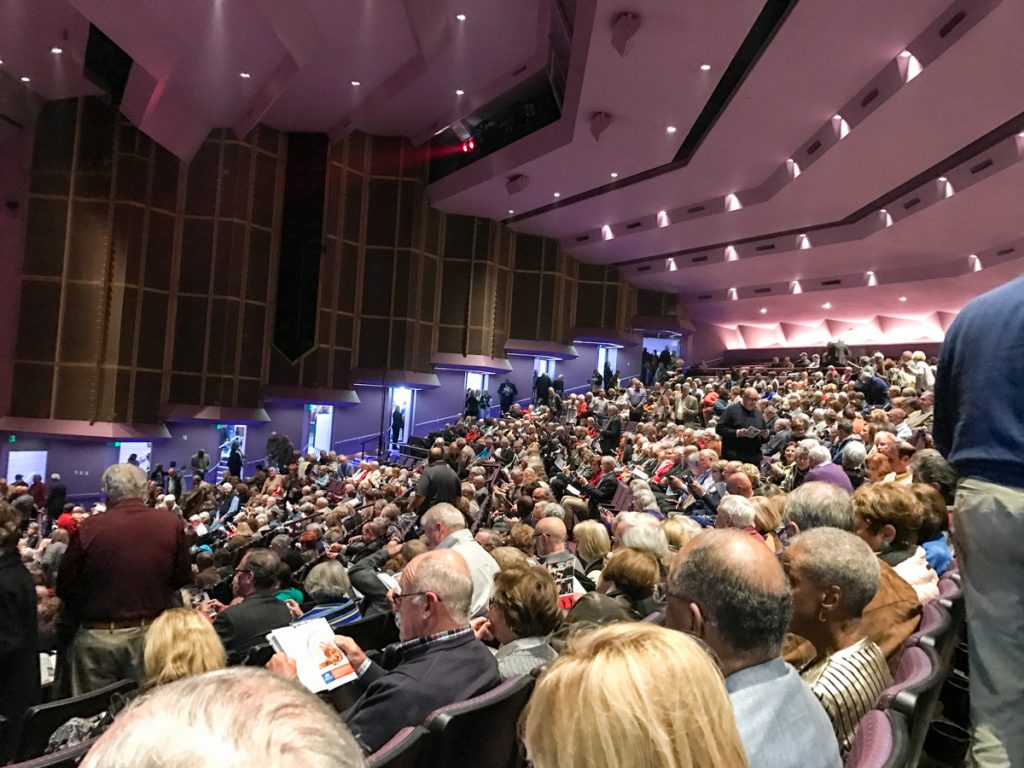 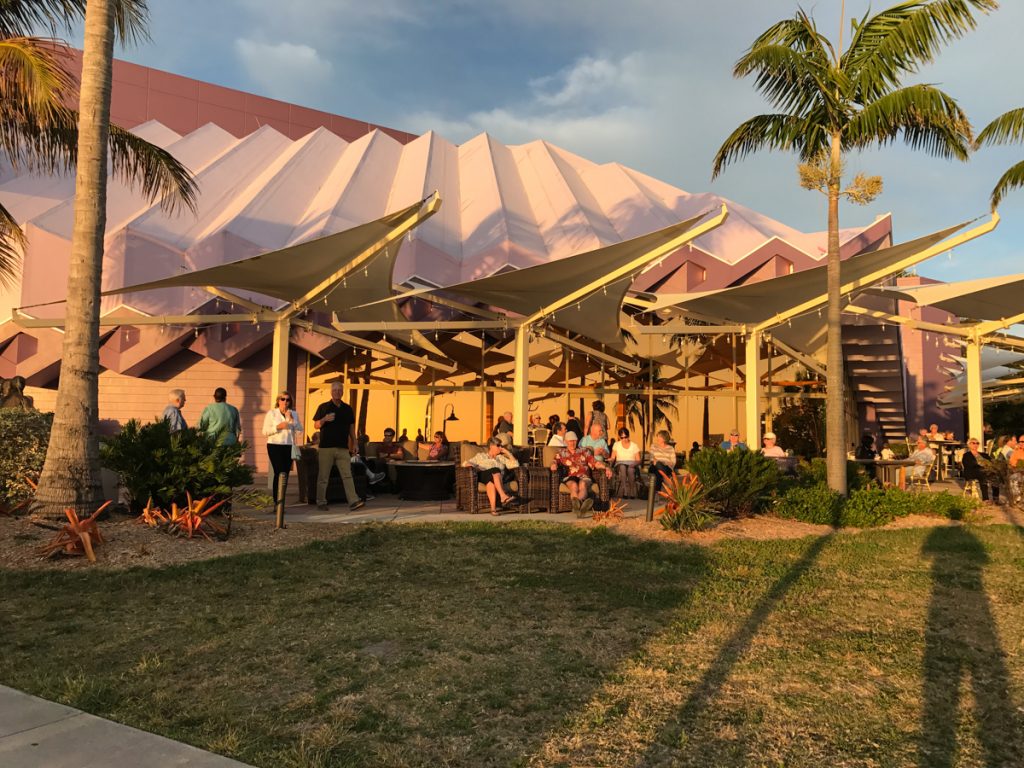 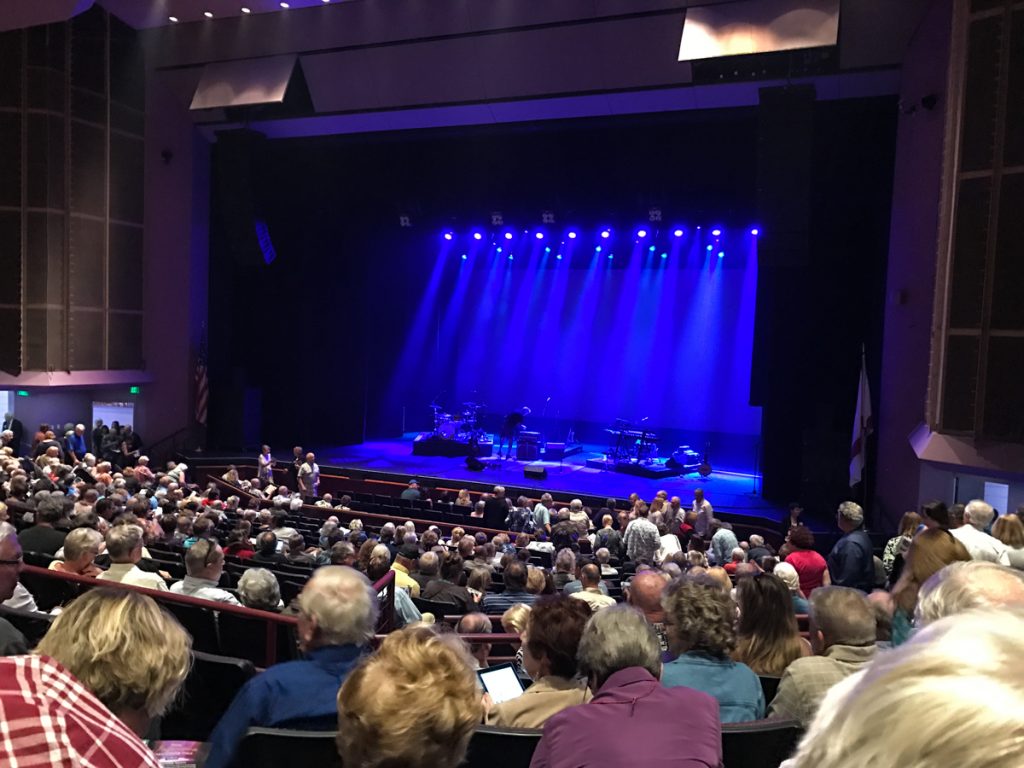 Cath and I really enjoyed the Nitty Gritty Dirt Band. They formed in 1966 and I started listening to them sometime in the 70’s. For a band that’s been playing together for 50 years they rocked.

My cousin Deb and her husband Marc came over to the west coast a couple of days before Super Bowl weekend. They camped a few miles north and we got in a great kayak trip thru the Robinson Preserve. Another perfect weather day in what would turn out to be a perfect weather winter. 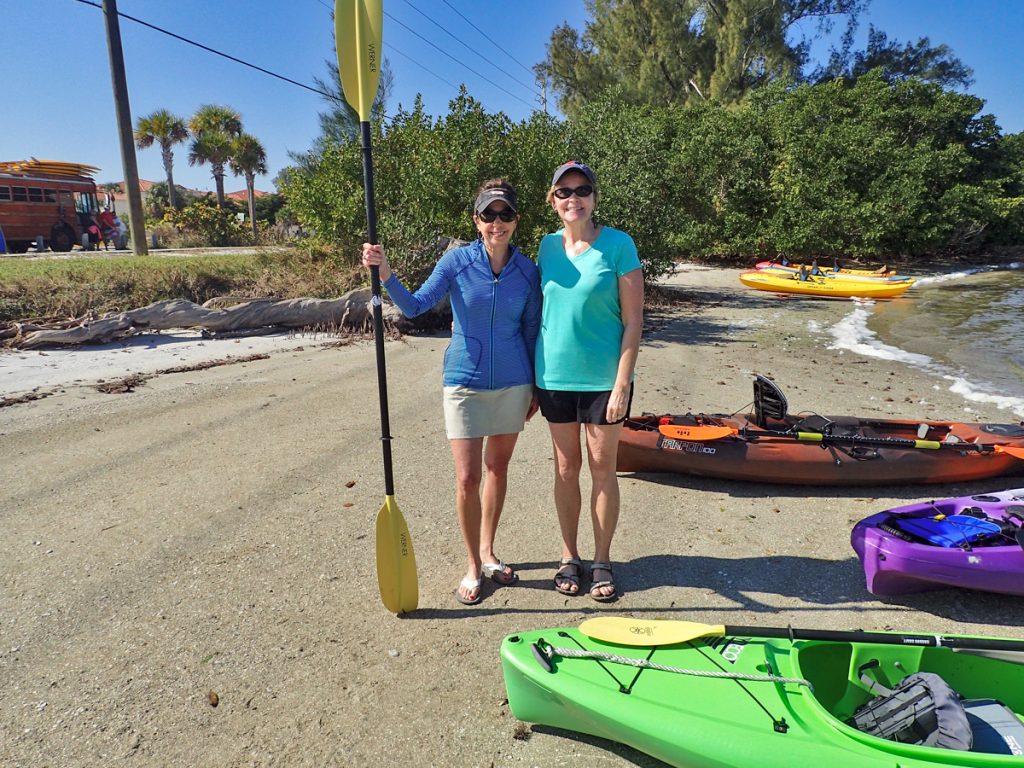 Cath and Deb launching at the Robinson Preserve

With Marc and Deb

Danielle, Wes and Gavin came down from Tampa to see Big Smile and we all went to lunch at St. Armands Circle. It was Super Bowl Sunday and yes, the Patriots were in the Super Bowl. And yes, they eventually won. 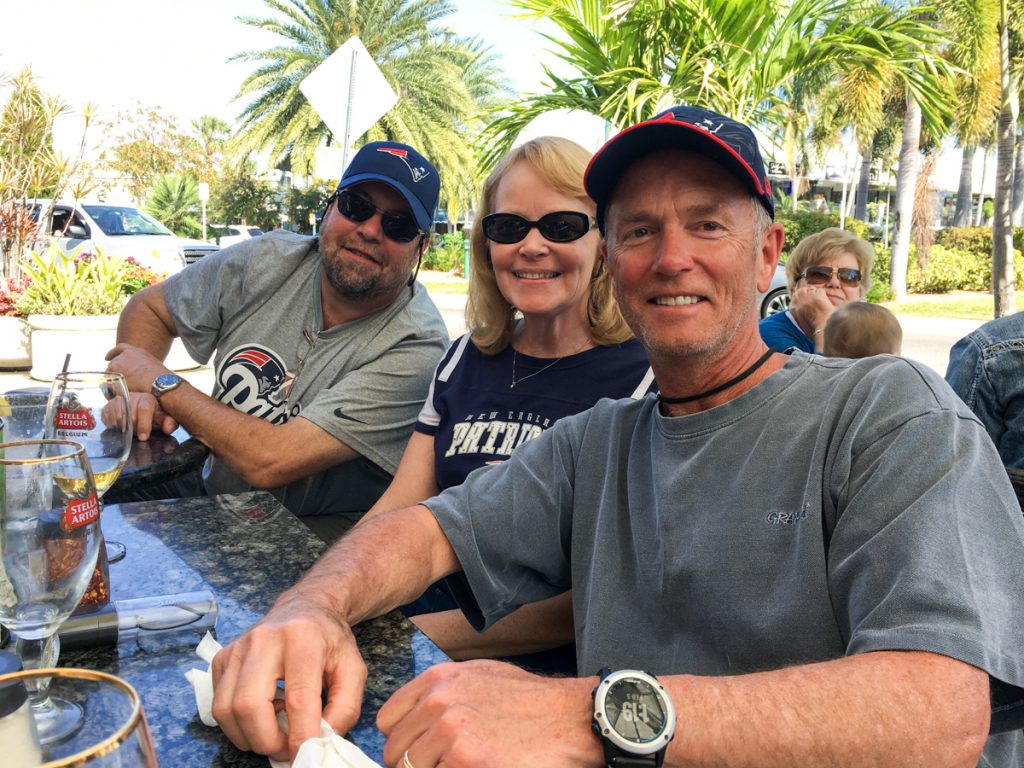 Marc, Deb and me

In addition to culture, Sarasota has a farmers market every Saturday from 7AM to 1PM. We both love farmers markets and while Sarasota’s is not as good as the Fort Pierce market, it is a fun time. 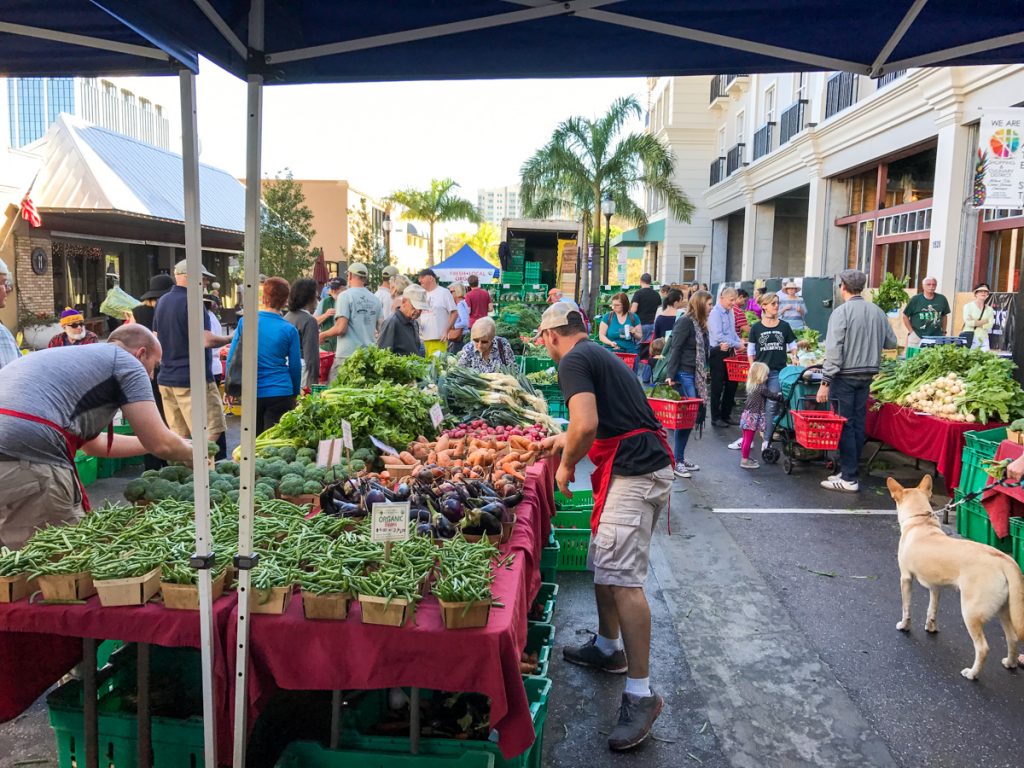 One pleasure to living on board is the people you meet. They can be your neighbor in the slip next to you, down the dock or, as often is the case, at the marina laundry. We had the pleasure to become friends with three couples on our C-Dock. They all were living on their boats for extended periods of time and all were fun to get to know.

We took a ride over to the Palm Beach Boat Show in late March. The show was big and fun. We had been invited to a cocktail party and yacht christening by a yacht broker friend of ours. The owner’s wife broke the Champagne over the bow perfectly.

We also got together for dinner that night with my college friend Blair and his wife Vicky. Atlantic Ave in Delray Beach is a hopping venue for the dinner crowd.

It’s 9AM and Cath just woke up. (This is a VERY quiet dock!) We leave tomorrow and I think I will end this chapter now. Everything about our Florida winter in Longboat Key worked out, especially the weather. We heard recently that crossing Lake Okeechobee is more problematic due to the lack of rainfall. When we crossed west bound in December the lake was overflowing. Not the situation this month. However, we are going around the bottom so no worries. 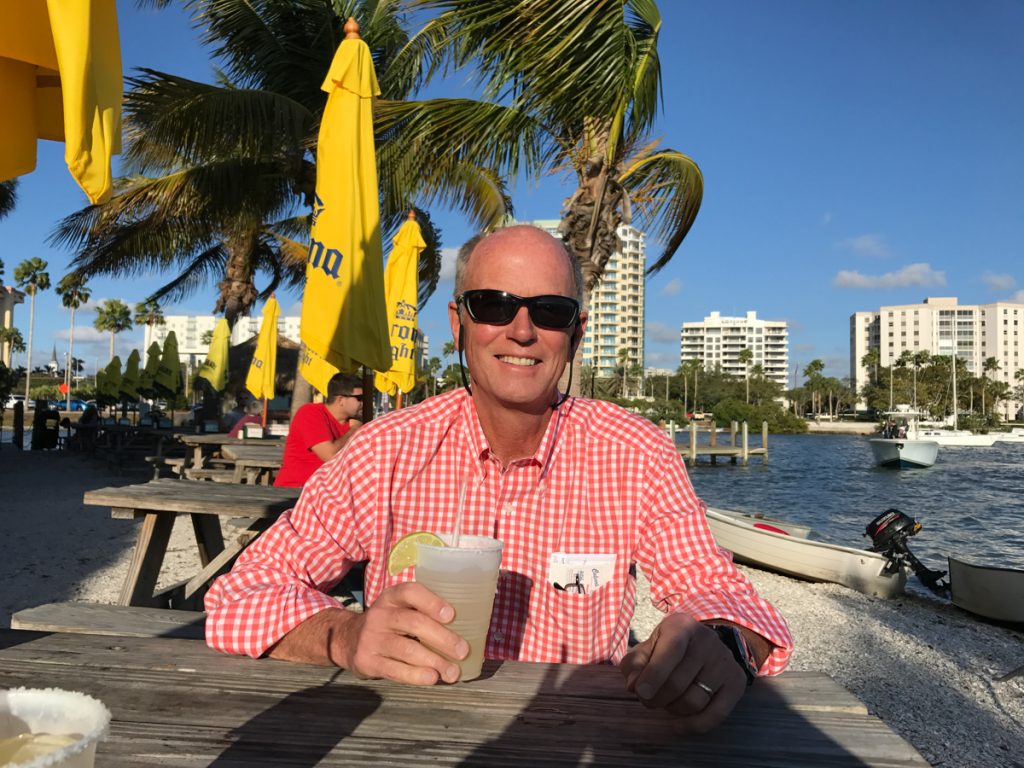 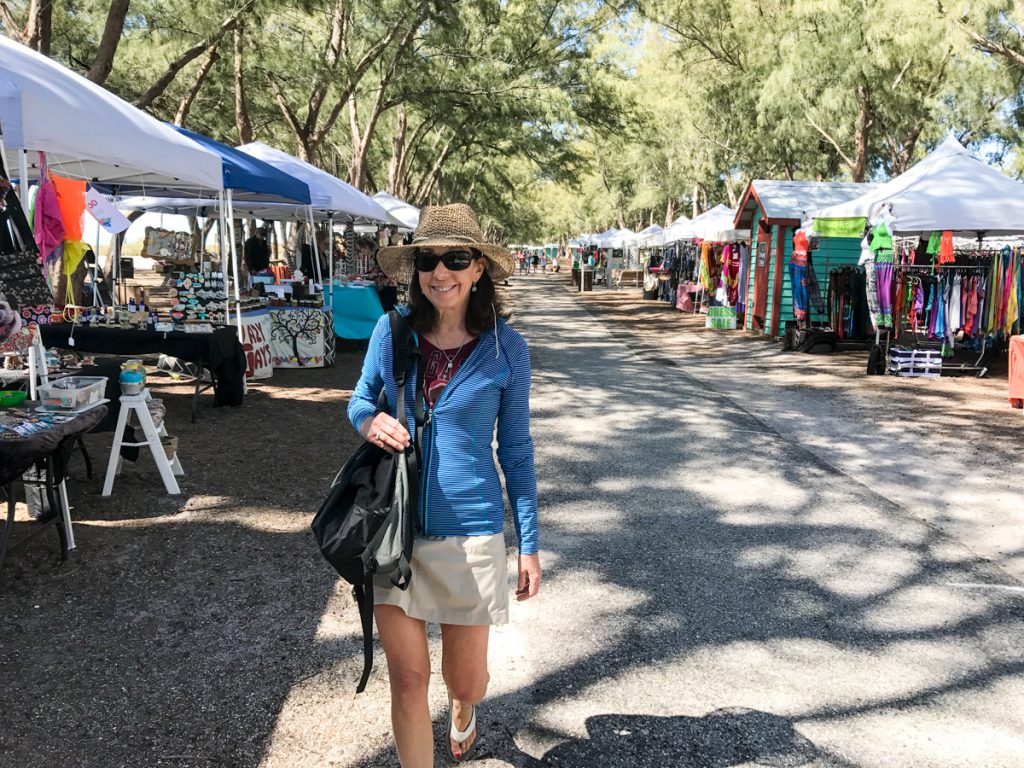 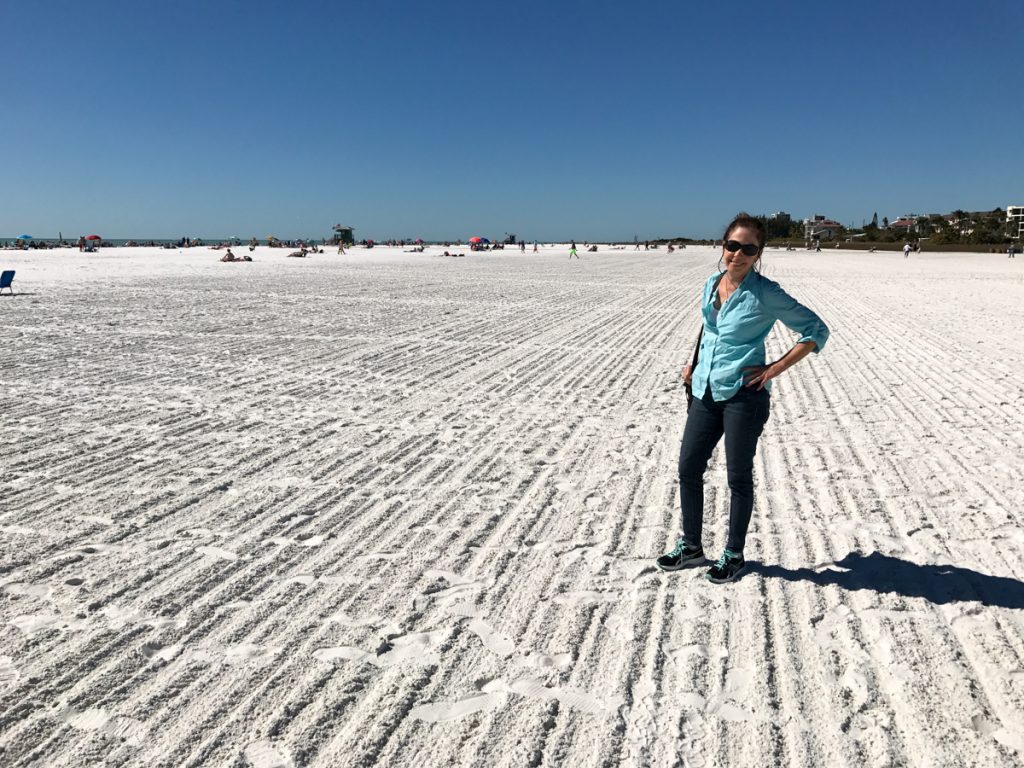 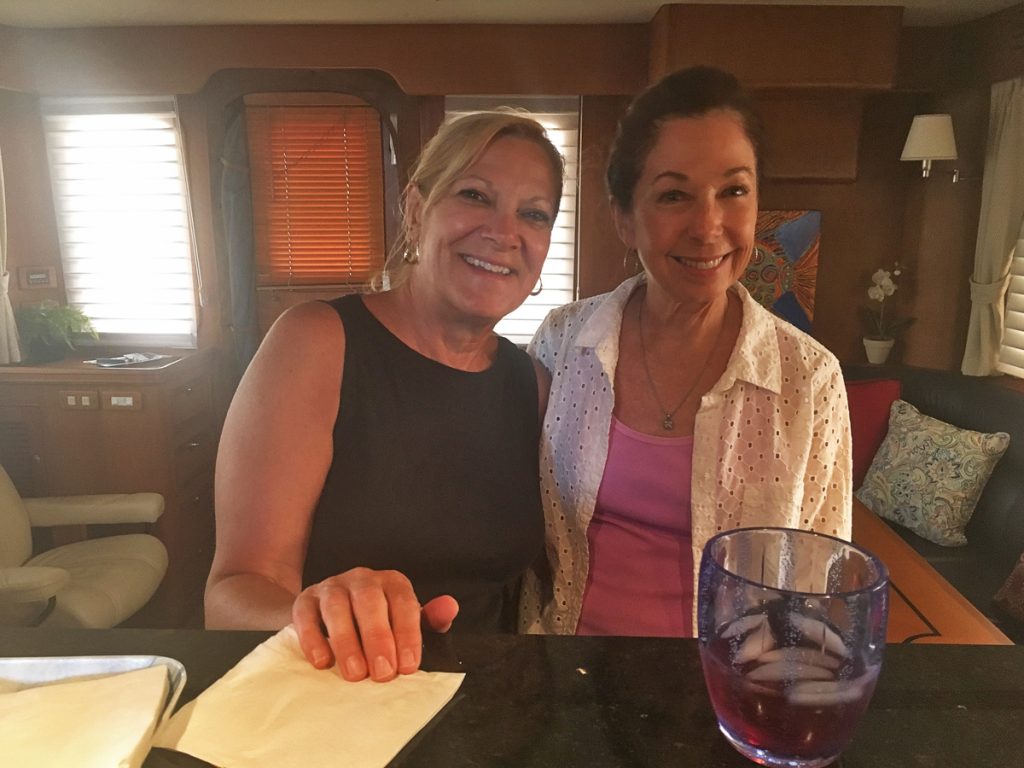 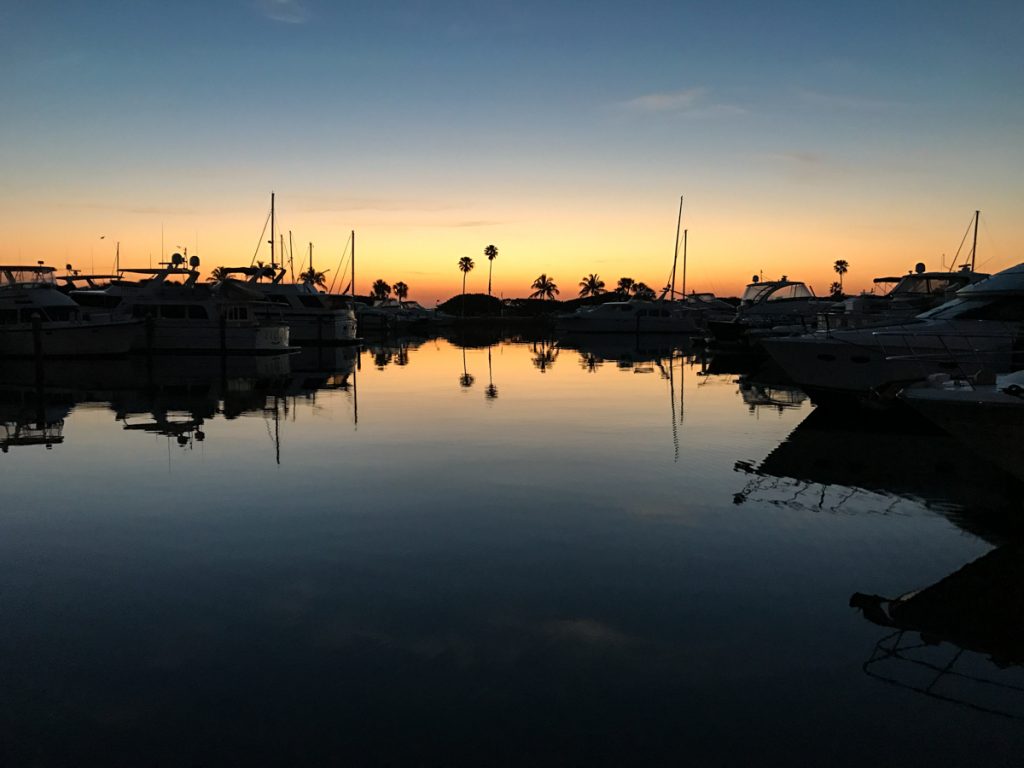