We flew down to Ft Lauderdale Friday April 30th and arrived at Apex Marine at 6PM. Our car was in the marina lot where we left it. Cath had not experienced living “on the hard” so the weekend would be interesting. The forecast called for temps in the 80’s. The AC only works if we are in the water so we hoped night time temps cooled off to something we could sleep in. Not much breeze on this section of the New River and asphalt radiates a lot of heat onto a blue hull.

This section of the New River has several restaurants within walking distance. Our favorite is the Downtowner Saloon. There are outdoor tables and a large indoor seating area which we used several nights and caught some of the NCAA Bball tournament. The walk to the east brings you to a long stretch of side tie slips operated by the City of Ft Lauderdale. Saturday and Sunday were spent getting ready for Mondays launch.

Stuff happens and our launch was pushed till Tuesday. Finally at 3:15 Tuesday afternoon we dropped into the water. Big Smile had been on the hard for over a month so we spent an hour getting the systems up and running and waiting for our “ugh” invoice. We had a reservation for a side tie on the east side of the SE 3rd bridge which would allow us an early start on Wednesday. However we needed to get thru the two bridges by 4:30 as they do not typically operate between then and 6PM for rush hour. We made it thru at 4:25 and 300 yards later we squeezed onto the wall between a sport fish and catamaran. My first time operating a boat with both bow AND stern thrusters. Makes sliding sideways easy especially when the current is dragging you.

Wednesday morning we pushed off at 7:30 for the 50 mile trip up to Lake Worth inlet. It was a beautiful day with a 10 knot breeze out of the south. This helped push us at an average speed of 9 knots. One of the jobs completed at Apex Marine was repainting the bottom. There was a lot of discussion concerning the previously applied TBT paint and what they proposed. After a solvent test was performed to see if the old paint would gum up (it didn’t) I agreed to the added expense of having them apply a paint by Luritek called Eco-Clad. The hull was thoroughly sanded and washed. A primer was applied followed by the top coat. Apex has been applying this paint for several years and quoted numerous owners who claimed 15-20 percent increases in speed and fuel savings. I don’t have the benefit of past data but hope that the claims are true. They also stated that it will last 2-3 years between re-coat. We shall see. 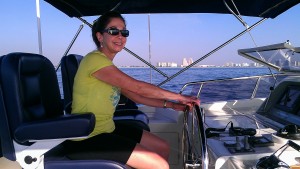 We pulled into Lake Worth inlet and made the south turn to anchor just east of the turning basin. Tide was dead low which concerned me but we were showing 1.5′ below the keel when we dropped the hook. As the chain played out I felt a slight bump. Must have hit a ridge in the sand. No issues though and we spent our first night at anchor. We also lit the oven for the first time and baked a lasagna. A perfect first night. 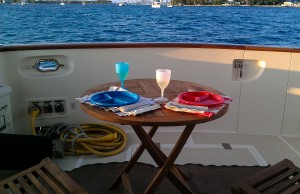 Pulled out of Lake Worth inlet early Thursday and headed north to Ft Pierce. Wind was blowing hard, 18-22 knots out of the SW, with a swell from the east. Our 50 mile trip was slower but our fuel burn was also lower. Six hours later as we approached Ft Pierce inlet we noticed breaking waves across the North 1/3rd of the entrance. A strong outgoing tide was hitting a swell from the SE. Fortunately there was room towards the south side of the entrance where smaller non breaking waves existed. We powered thru them and felt glad for the 48 tons beneath us.

A half hour later we pulled into Harbor Isle and was met by Sarah the marina manager. We had met her earlier in the week when we dropped our car off. A great person.

Ft Pierce we know well as Cath’s parents owned a condo at Ocean Village for 10 years. We visited yearly when our kids were small but had not been back in 15 years. A lot had changed including the building of Harbor Isle in the mid 2000’s. Two large hurricanes in one year also changed the landscape somewhat. That night we walked to “Chucks” for dinner. We remember it as a biker bar but apparently the hurricane helped change that. We had a great dinner and love the fact that it is directly across the street.

Packed our bags on Friday and drove back to New Jersey arriving exactly at 6PM Saturday.