Since we had been to the Abacos the prior two springs this years trip would be shorter. We were, however, able to get to some different anchorages having come from Spanish Wells to the south not from the US east coast. Lynyard Cay would be our first stop. Our friends Jim and Beth arrived an hour later and dropped their hook. Lynyard Cay is a small island but it provides good protection from the Atlantic swells and is a dinghy ride from the well known Pete’s Pub in Little Harbor. The next day the four of us dinghy’d over to Petes for drinks and dinner. As funky a place as you will find in the Bahamas Petes also serves good fresh seafood. A couple of miles to the west of Lynyard Cay is a bay that goes by the name of “Bight of Old Robinson”. We had read that there was awesome kayaking thru mangrove swamps, blue holes and the bay itself was filled with what one trawler owner described as “turbo turtles”. After towing the kayaks over with our dink we found the mangroves. We also found the turbo turtles. These dark shapes zipped thru the shallow water at breakneck (for a turtle) speed. We could only get within about five yards before they would dart away in a zigzag fashion. There were scores of them. The mangroves were fascinating and one could get lost if not careful. We never did find a blue hole but three divers died several years ago after getting lost in the blue hole. 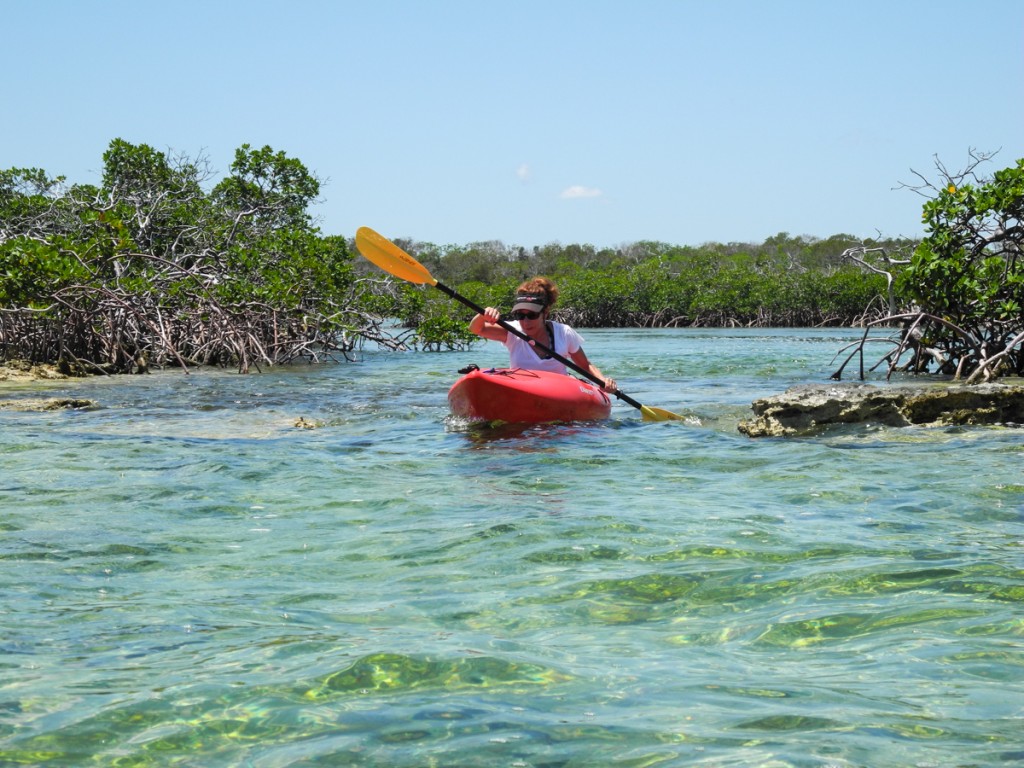 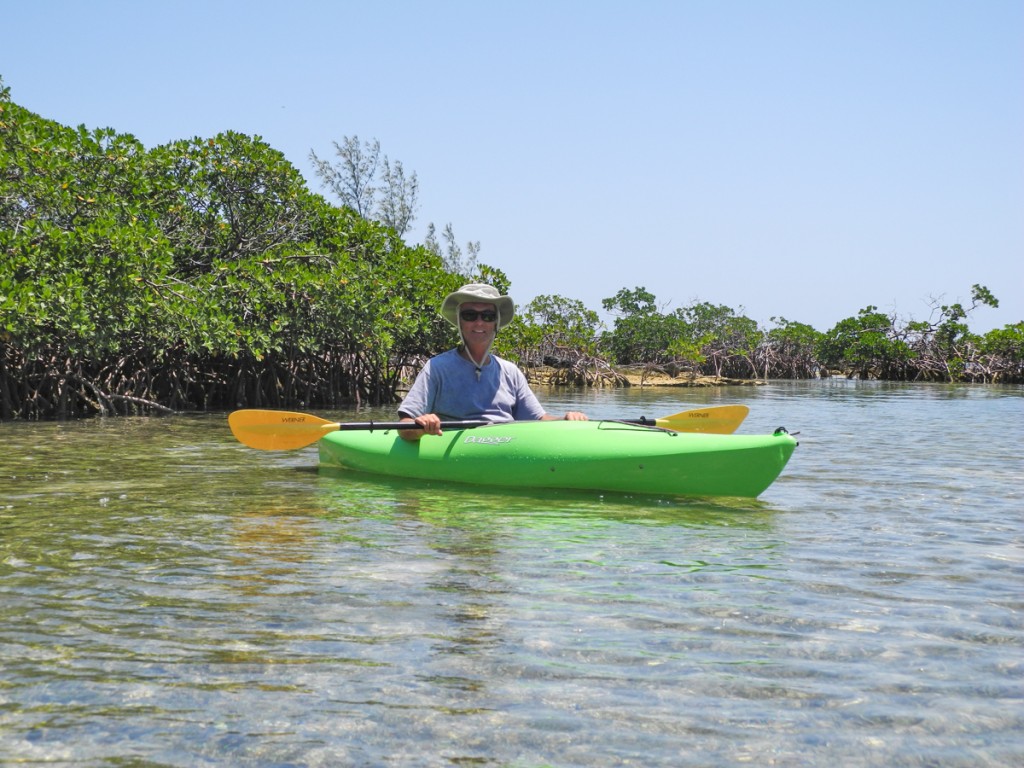 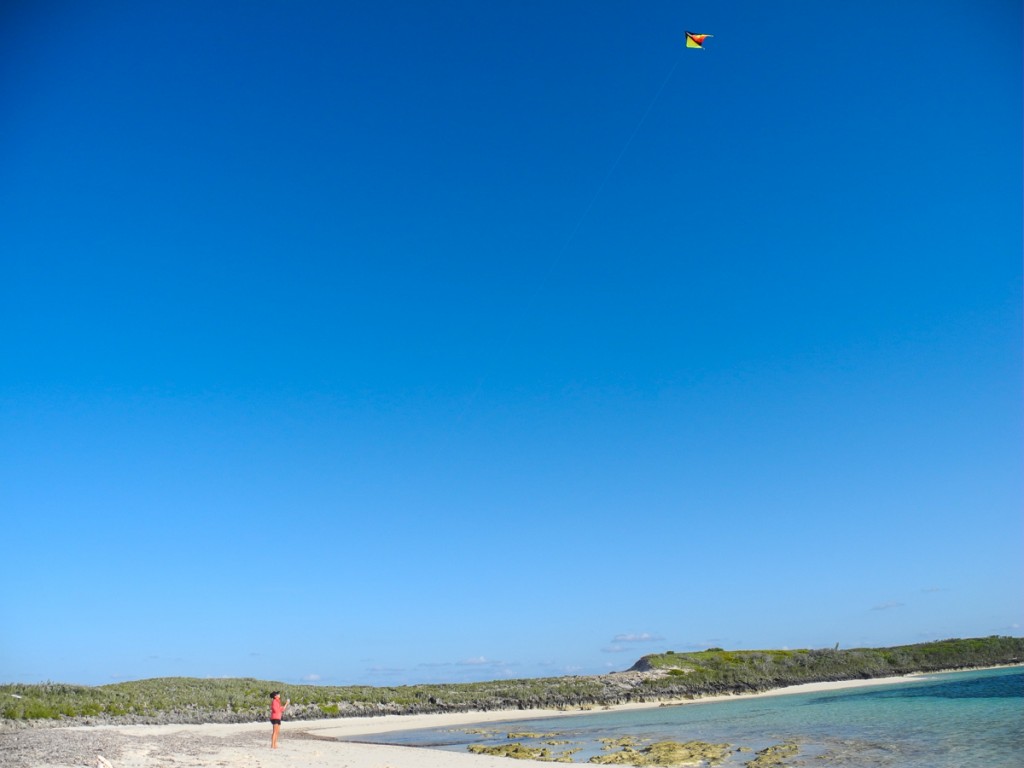 Flying a kite on a deserted beach

Our son Andrew and his girlfriend Nicole were joining us in Marsh Harbor. This was the main reason for cruising back thru the Abacos on the way to the states. After Lynyard Cay we had a couple of days to relax prior to their arrival and chose one of our favorite harbors to try out a newly refurbished marina. Hope Town on Elbow Cay has a small, well protected harbor with moorings and a recently updated facility, Hope Town Inn & Marina. We booked two nights but stayed four and would eventually return with Andrew and Nicole. It is a beautiful, first class facility. Probably the nicest we have ever stayed at. Located on the west side of the harbor it even provides a free boat shuttle to the small town on the east side. As we have written about in past years, Hope Town is incredibly picturesque with small pastel painted  homes and cottages. It also boasts a lighthouse which you can climb. 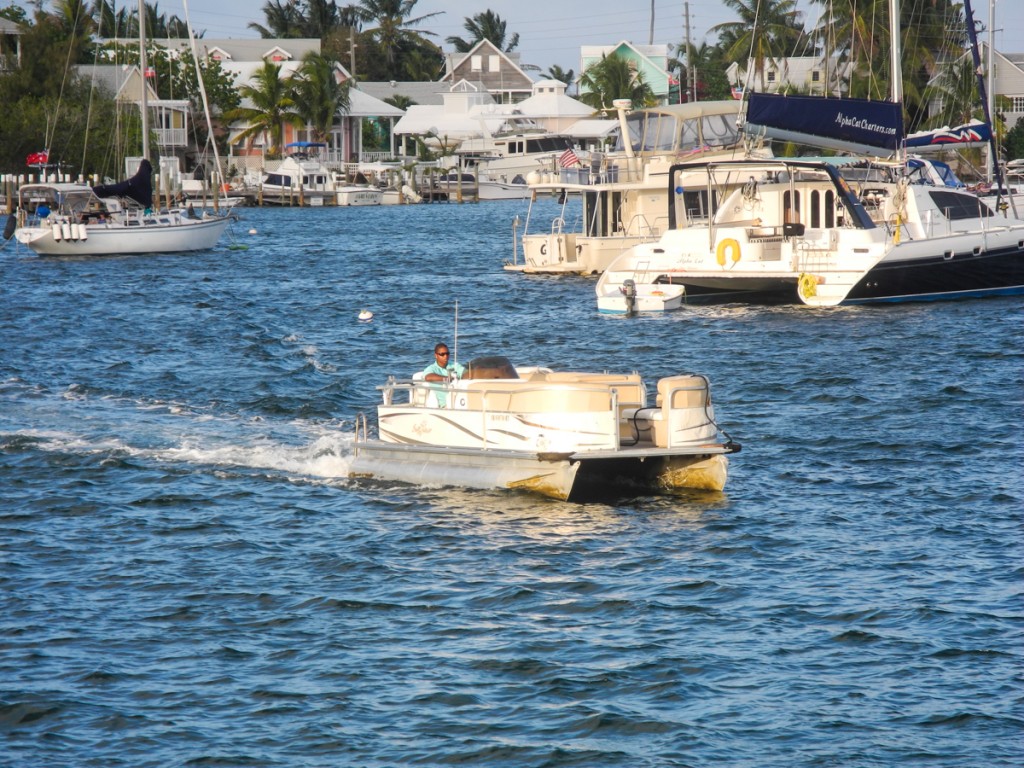 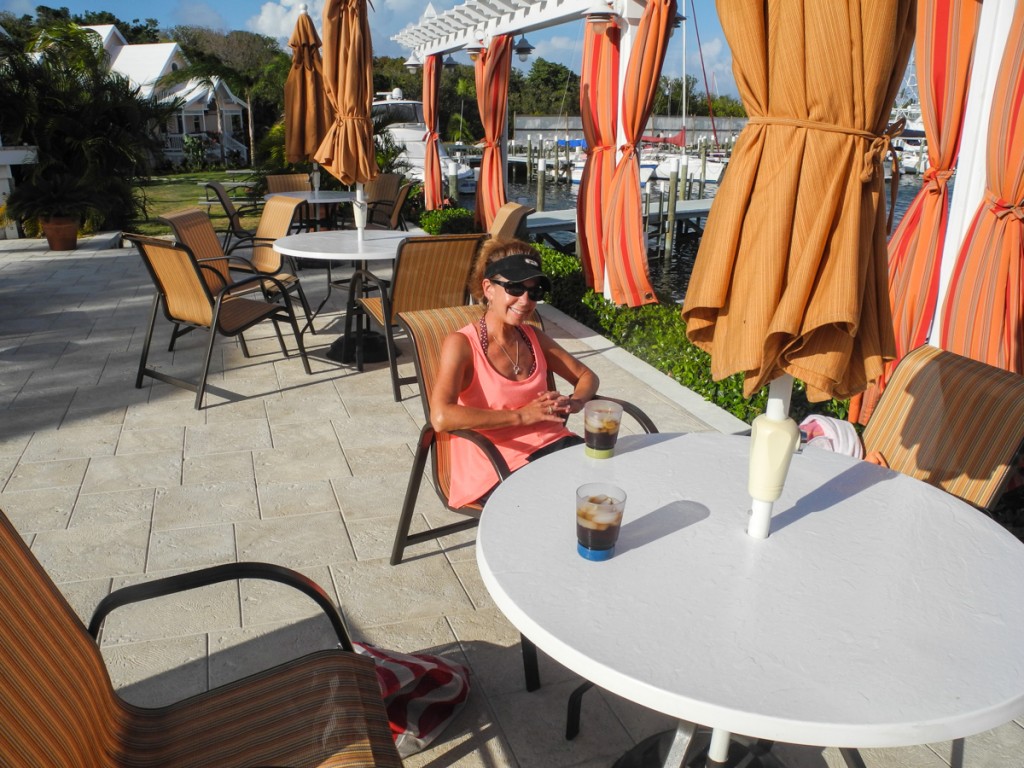 At the marina pool 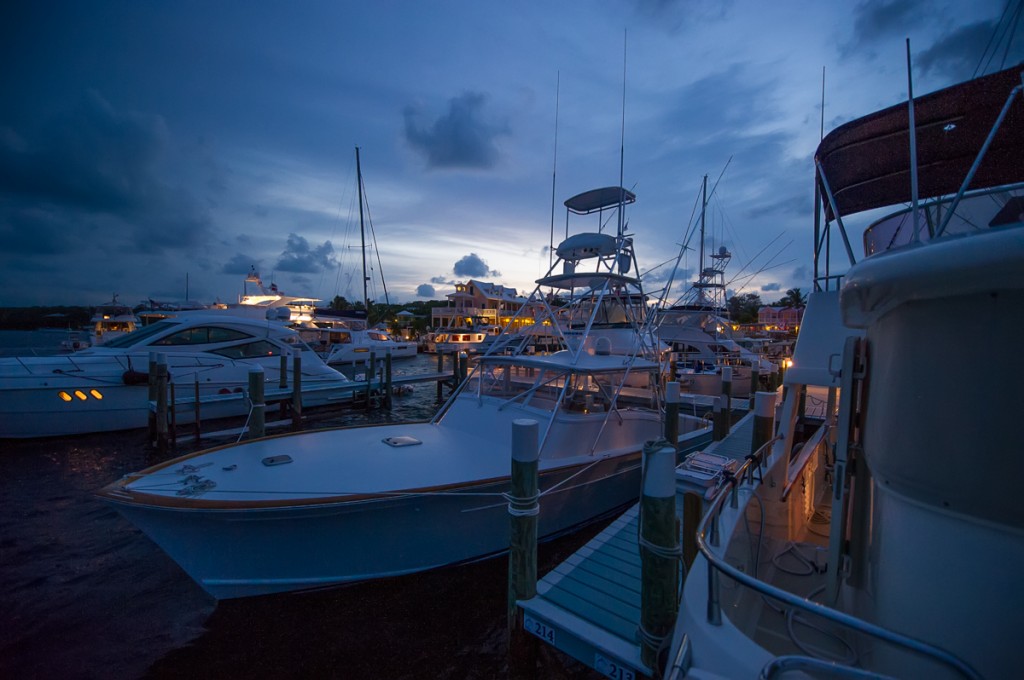 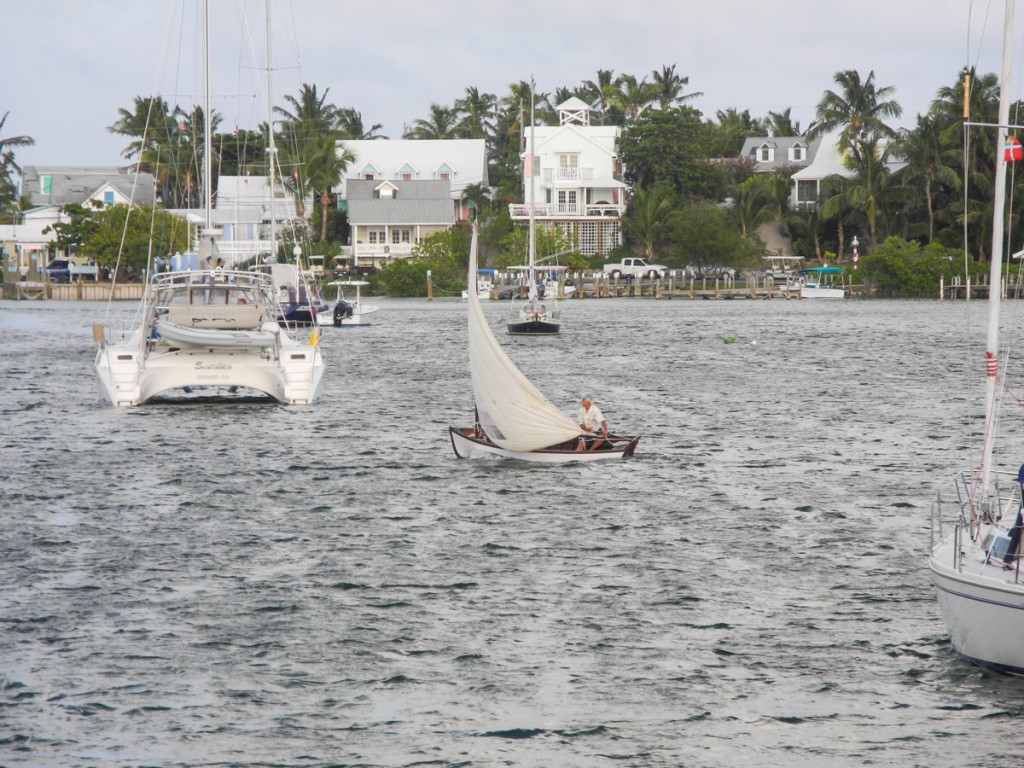 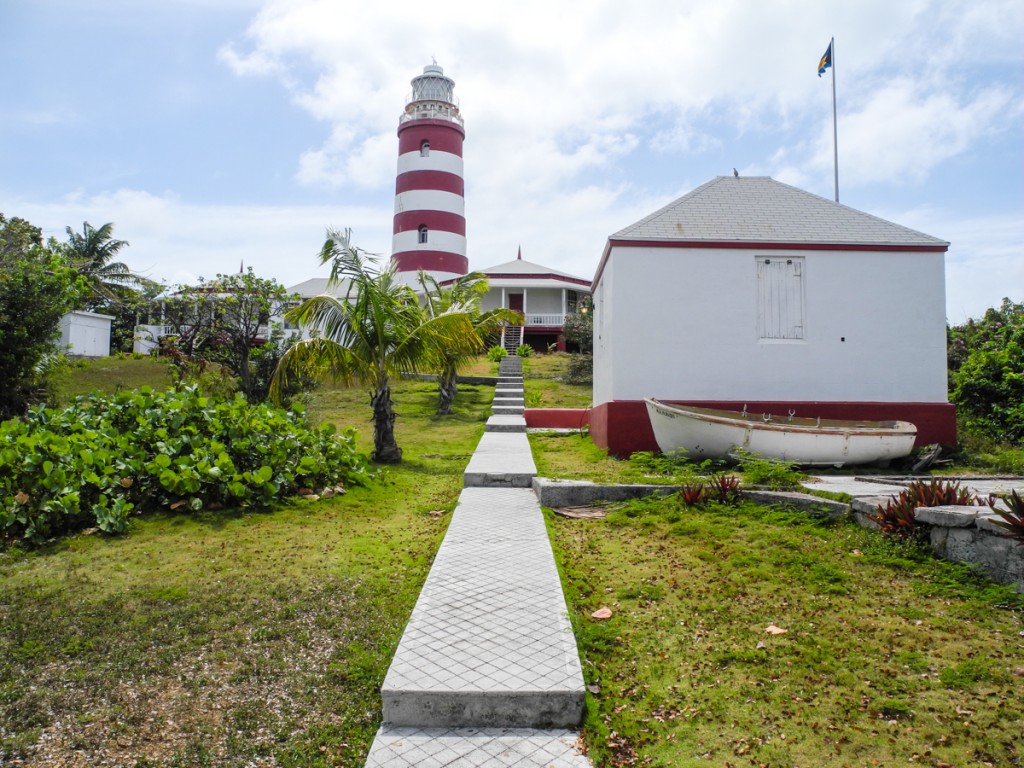 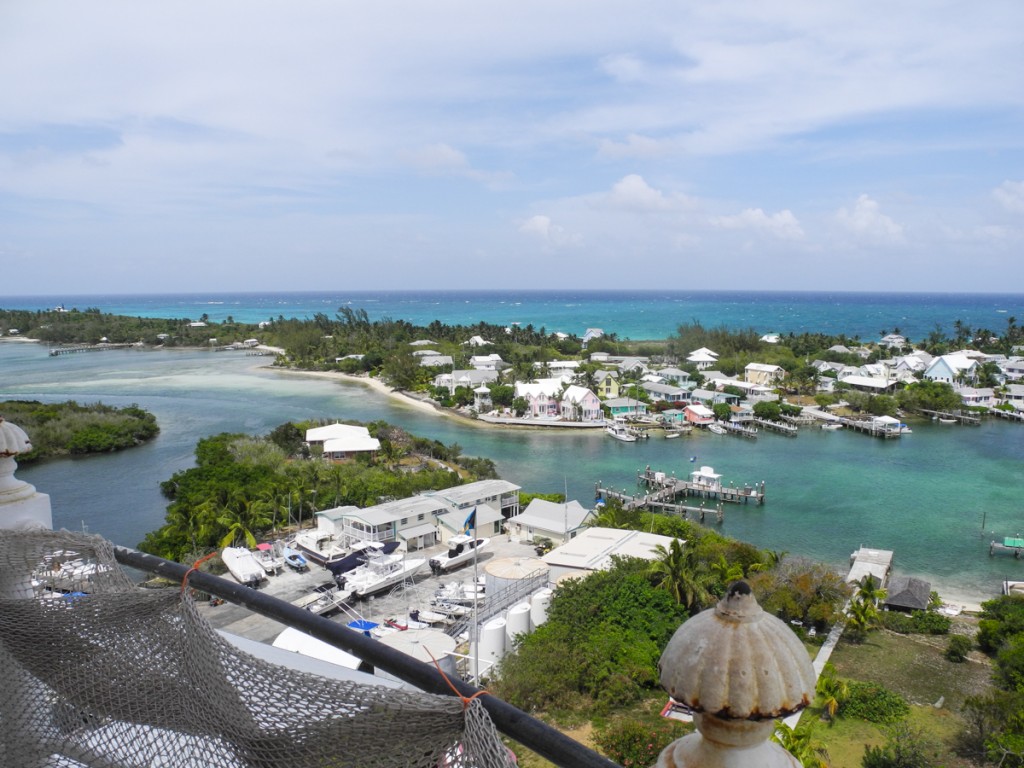 View from the top

Andrew and Nicole arrived from Washington DC and took a cab to Mangoes Marina in the heart of Marsh Harbor. While Marsh Harbor is an oft used convenient stop for boaters it is not a place we would want to stay for long. You can stock up on food, booze and fuel and leave. It is, though, a very convenient stop to pick up guests. 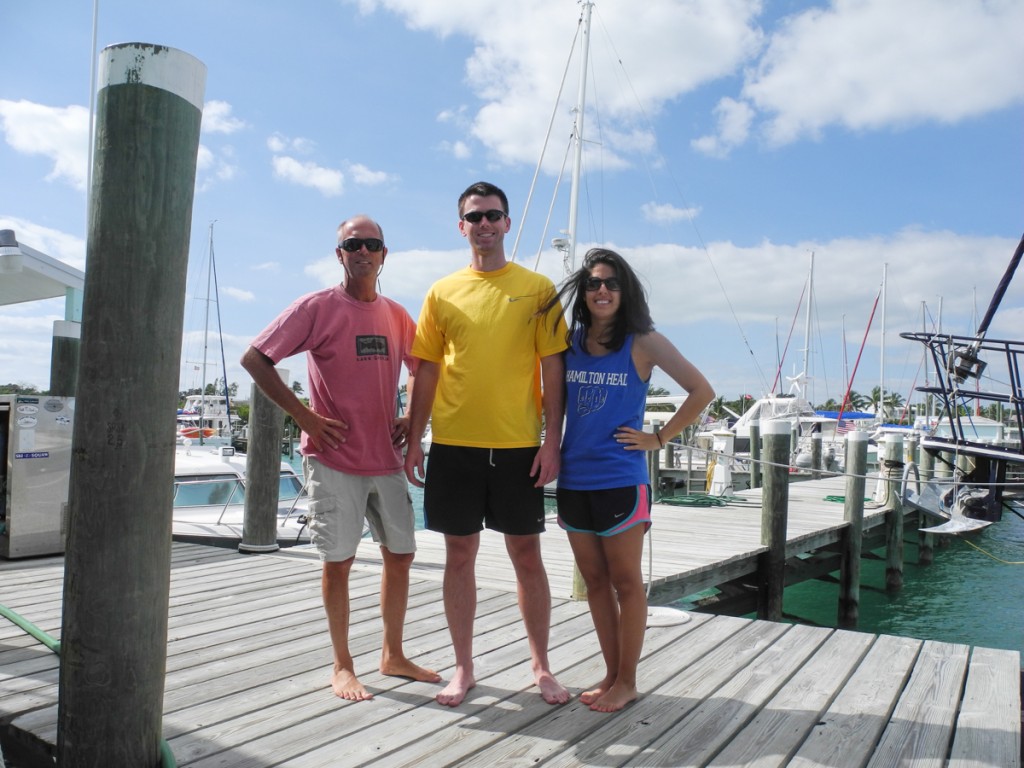 Fueling up in Marsh Harbor

Neither had been to the Abacos so we decided to do some back-tracking including Hope Town and the Bight. Since we all love to eat, especially Andrew and Nicole we arranged for a favorite restaurant to pick us up at the Hope Town dock and transport us to dinner. The restaurant known as “Firefly” is superb. The outdoor dining during a beautiful sunset is hard to match. And the food is spectacular. 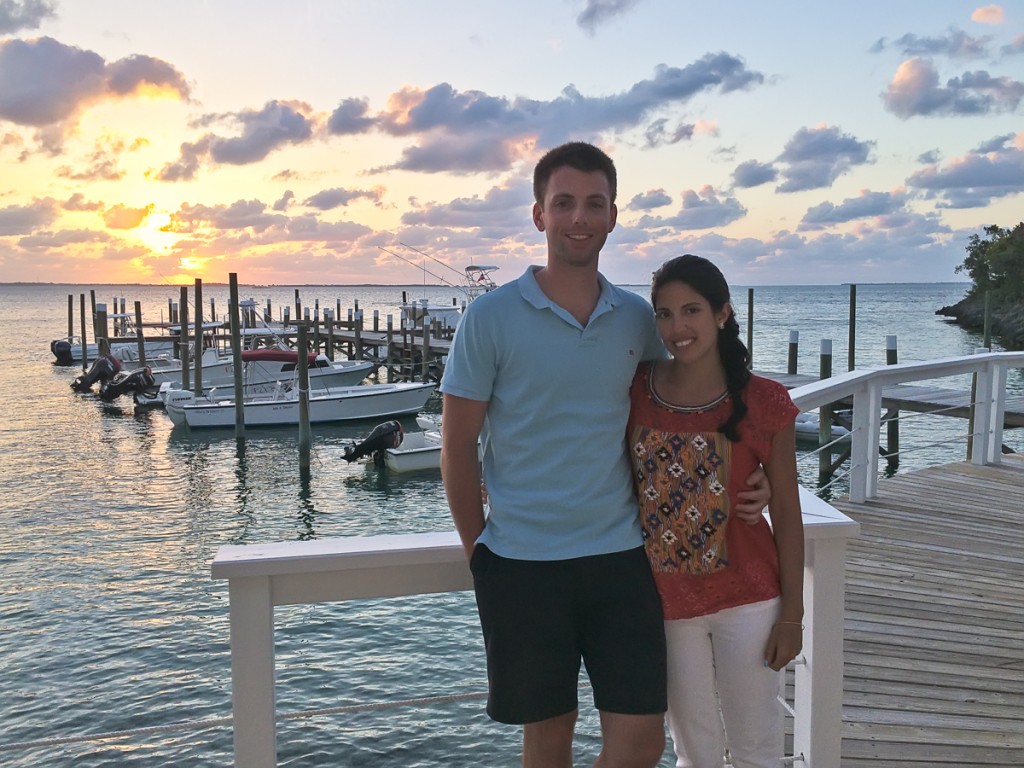 Our agenda for the 6 days was loose. We made stops at Tahiti Beach, Man O War Cay and of course Great Guana Cay with the famous “Nippers” and magnificent beach. At Nippers we caught up with our friends who coincidently had a couple of their kids visiting for the week. 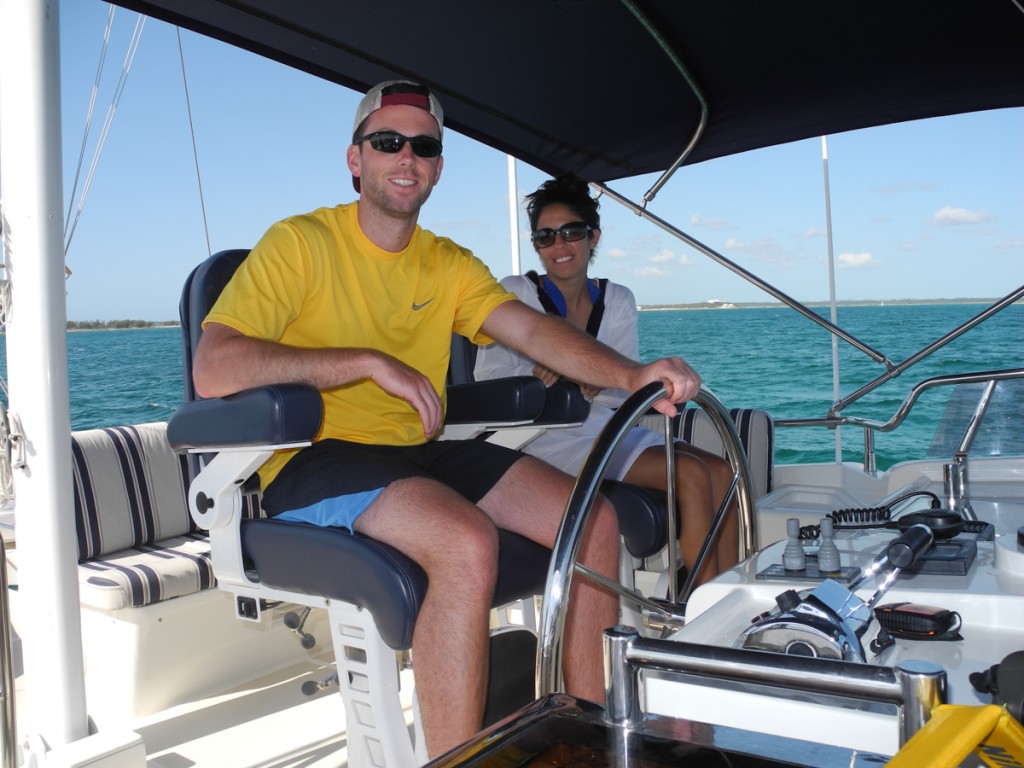 Andrew at the helm 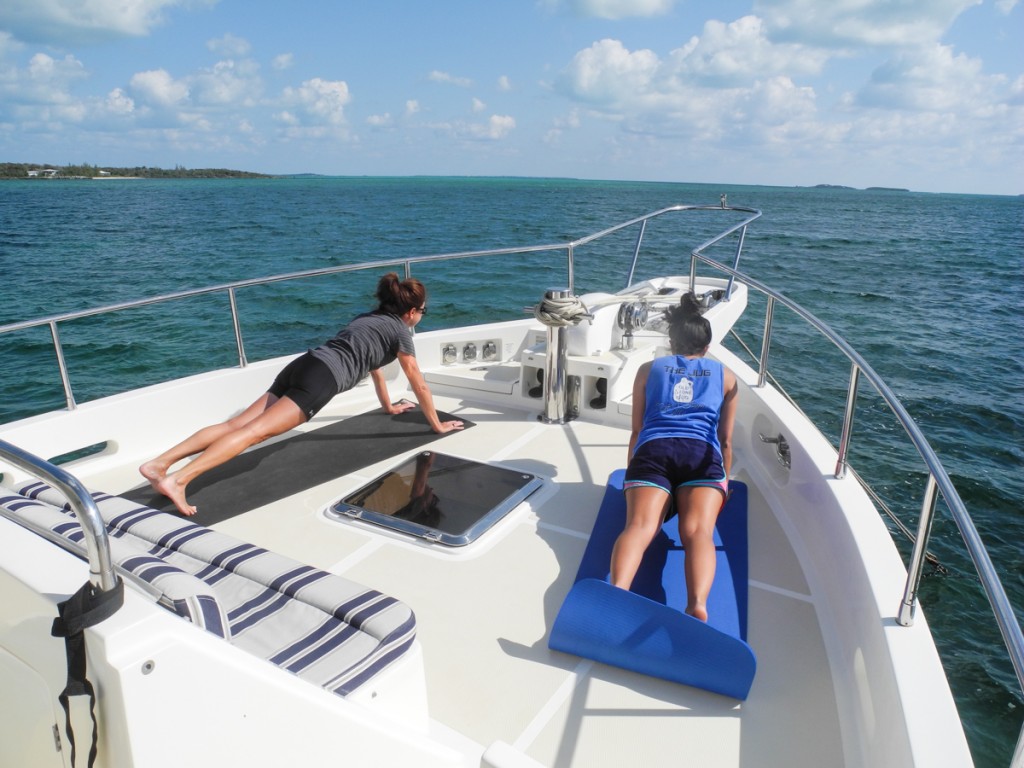 Nicole leads Cath in yoga on the bow 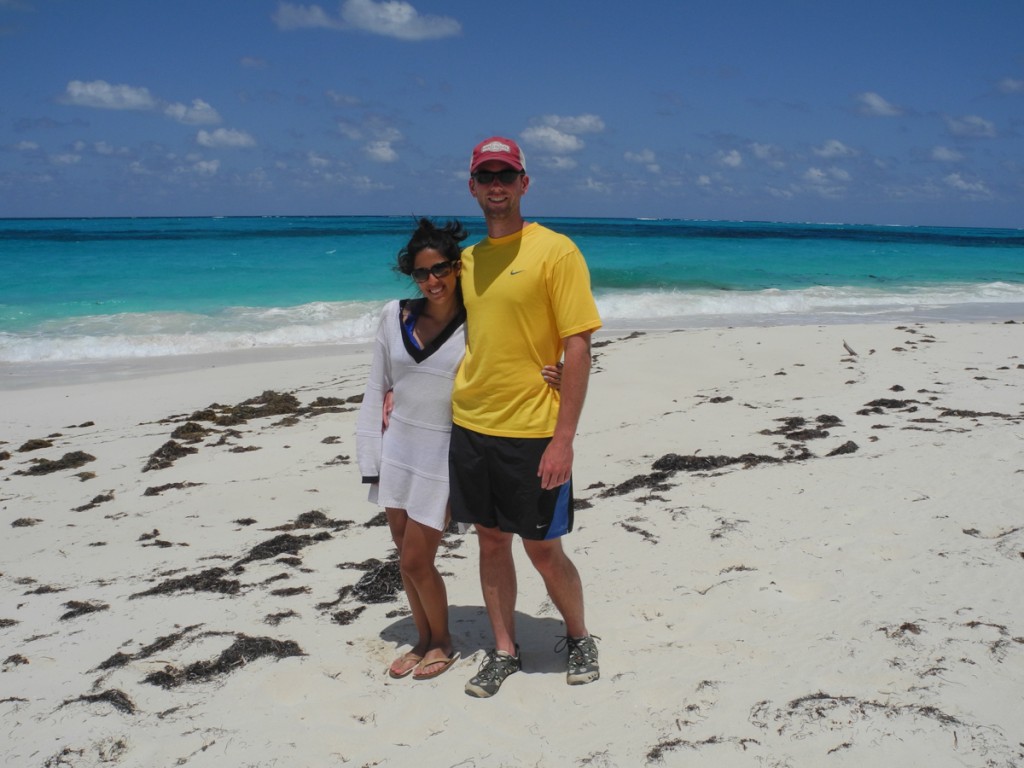 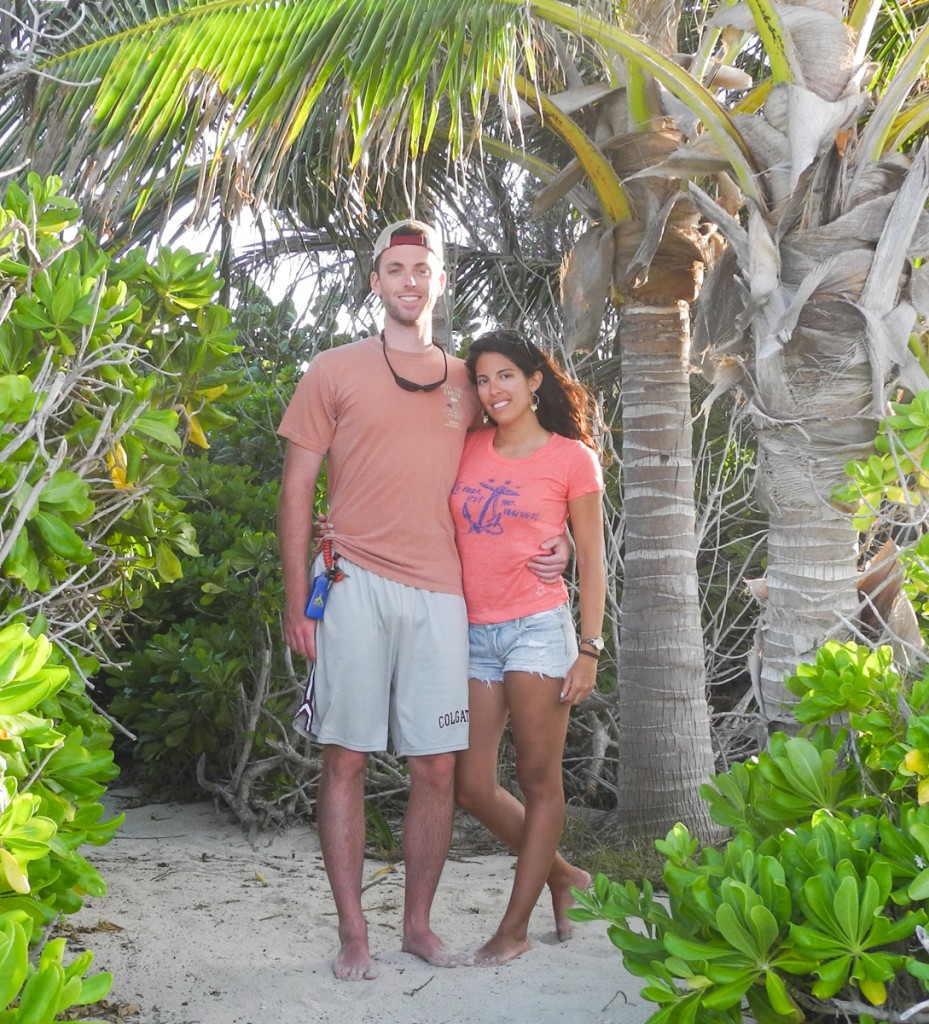 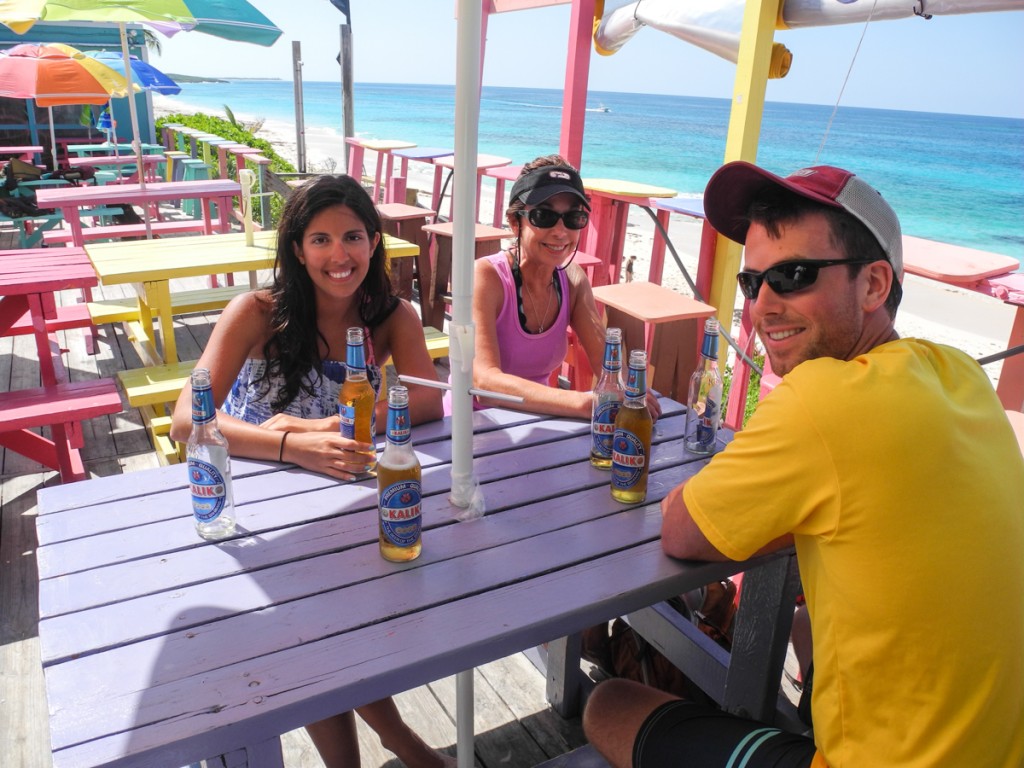 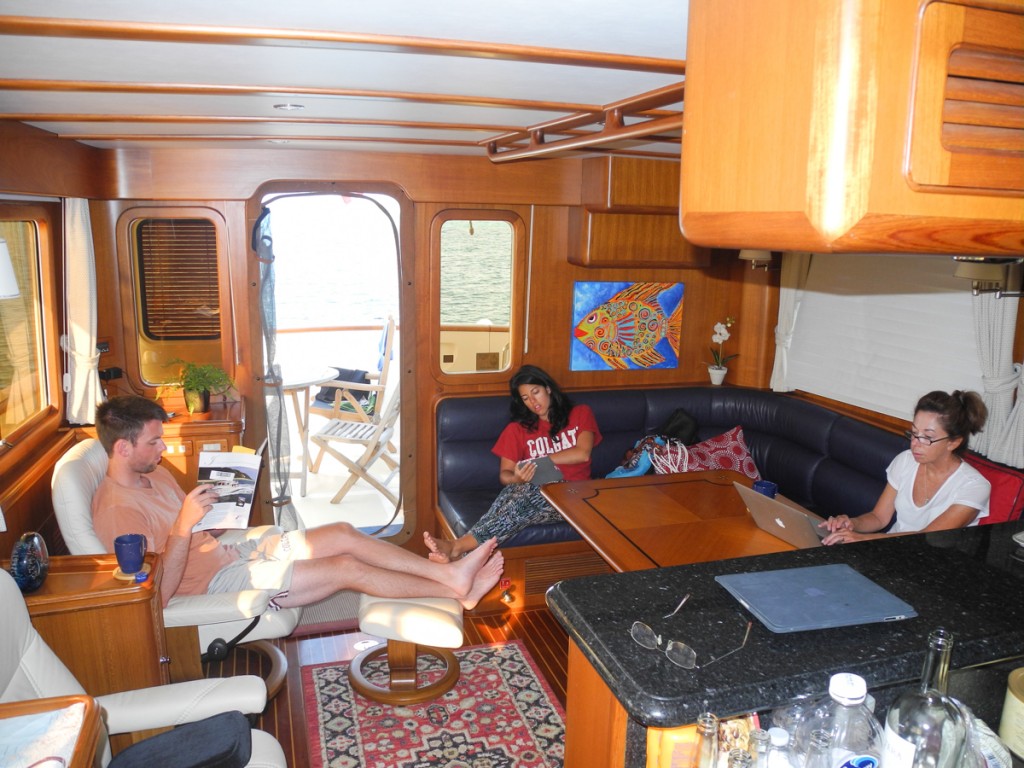 The six days went real fast but the weather was perfect as was the company.