Friday morning we dropped Andrew and Nicole at the Great Guana Ferry dock. Albury’s Ferry runs regularly scheduled service to Marsh Harbor. From there a quick taxi to the airport and back home in a few hours. Our trip would take much longer. The plan was to head thru the “Whale” to Green Turtle Cay where we would spend a night at the Bluff House Beach Resort and Marina. Weather was perfect and no Atlantic swells kept us from transiting the whale. Three hours after leaving Great Guana we were at the Bluff House dock. As it was Memorial Weekend a Big Bill fishing tournament was taking place. Between Bluff House and Green Turtle Club we counted over 25 fishing boats that night. Bluff House has a small but nice beach with a beach side bar. We spent the remainder of the afternoon sitting in lounge chairs. 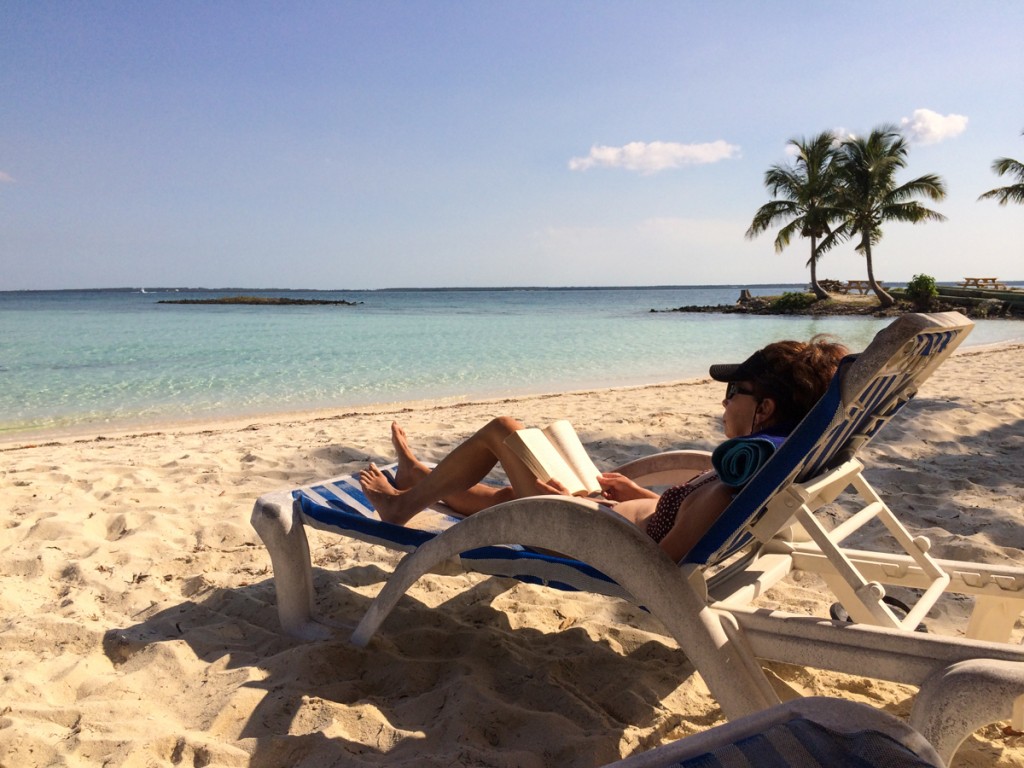 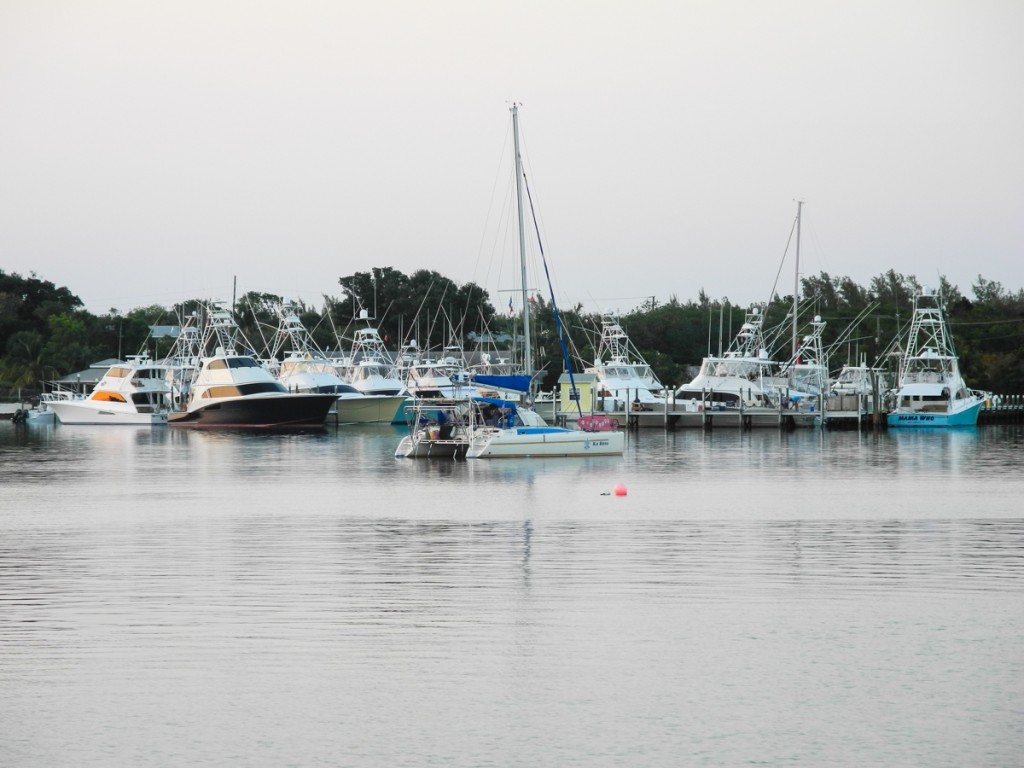 After breakfast we headed out for the 8 hour run over to Great Sale. The weather was good and so was the fishing. We alternated between catching Cero which we kept and Barracuda which we cursed. 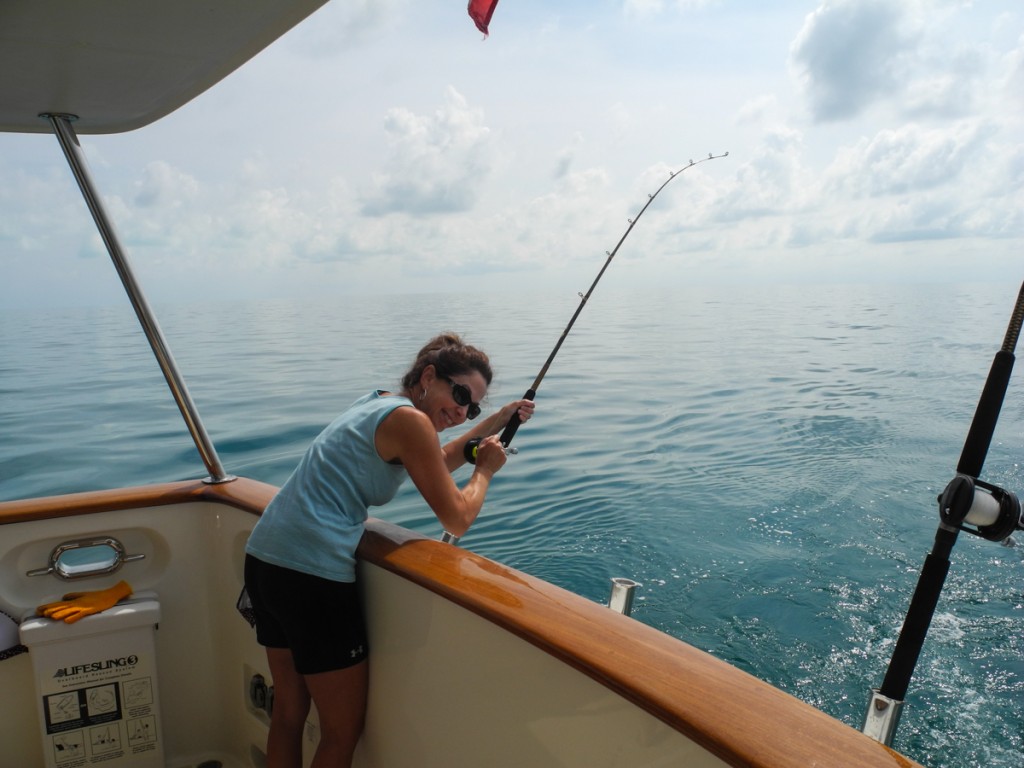 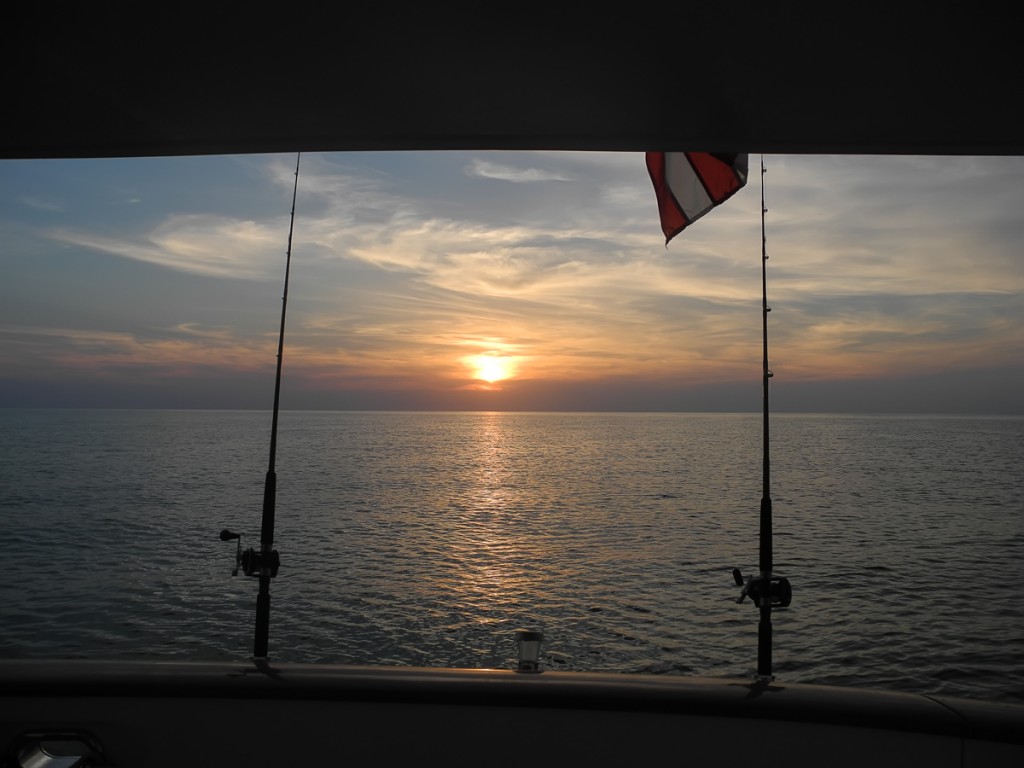 This last leg was to be our longest yet. Great Sale Cay to Charleston SC was a 385 mile run. The multi day forecast called for light winds and small, short period seas. The first 65 miles are on the Little Bahama Bank where water depths are consistently 12-20 feet. With auto pilot steering we spent the day looking for sharks and other sea creatures in the crystal clear water. It is easy to know when you have left the bank. In the span of two miles you go from depths of 30 feet to well over 1,000 feet deep. Color changes are quick and fishing, at least for us came to a quick stop. We caught only one immediately after leaving the bank but it turned out to be the largest Cero we caught the entire trip.

It is approximately 320 miles from the exit point of Little Bahama Bank to the Charleston SC Harbor entrance. It is also a straight line with a compass heading of almost due north. After leaving the bank, wind and seas remained flat for hours. Around 4:30 PM our radar began to pick up thunderstorms building to the west. We could see the sky darken and while pelting rain is annoying it is lightning that always concerns us. It never rained but what we saw at about 5:15 two miles off our bow was something we had never witnessed. Dropping out of a cloud was a large waterspout. NOAA identifies two types of waterspouts, tornadic and fair weather. We were ignorant of the distinction at the time and all we thought about was the strength of a tornado. Since our radar showed the line of storms moving to the northeast we altered course to the west and proceeded to put away anything loose and check all our tie downs. By time we were done the waterspout had disappeared. Getting back on our heading we got a camera and waited. At 5:30 another one appeared two miles or so off our bow and heading slowly towards us. This one we were able to get a picture of as we altered course to port. The waterspout only lasted a few minutes but it was intimidating. 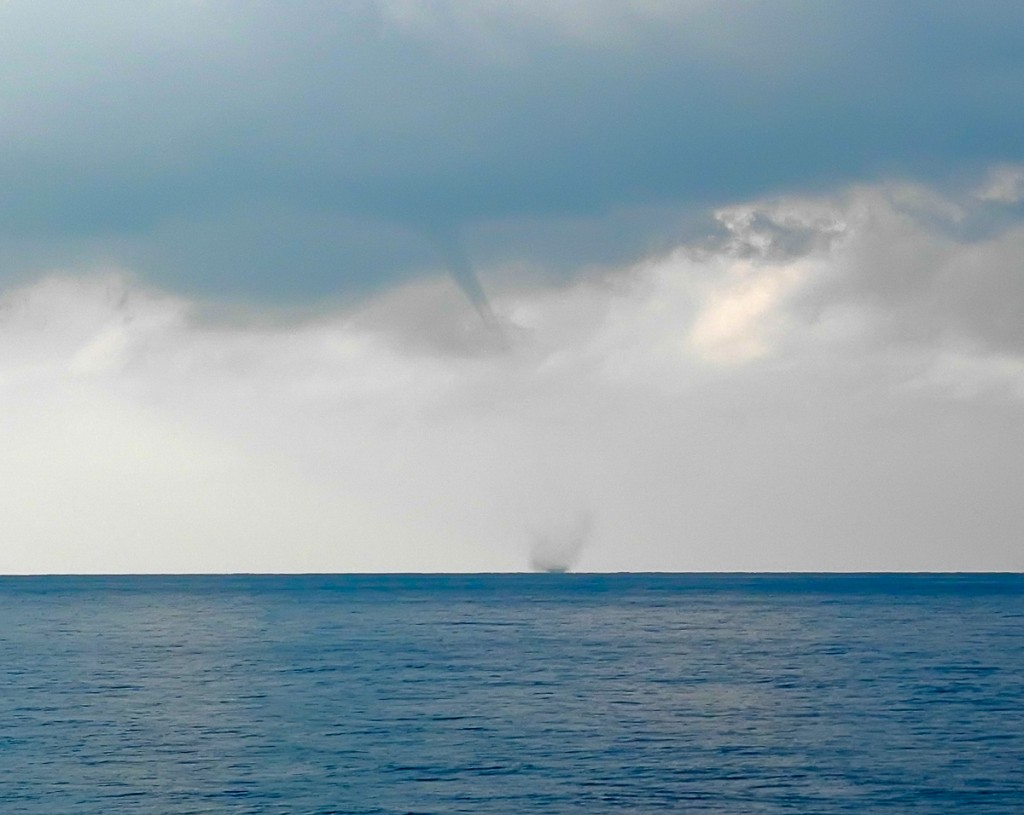 Waterspout heading towards us

The line of thunderstorms continued for a couple of hours but we did not see another waterspout. Unfortunately the storms wreaked havoc with the seas and the rest of our trip would be much less pleasant. Seas built out of the northeast and as we approached the Gulf Stream the collision of the two elements kept our stabilizers working overtime.

This was a 51 hour trip requiring two overnites. It is very difficult to adjust your biological clock to the watch system you have set up. One night is easy. By the second night my midnight to dawn shift was tough. It was made tougher by the fact that we were approaching Charleston SC shipping lanes. 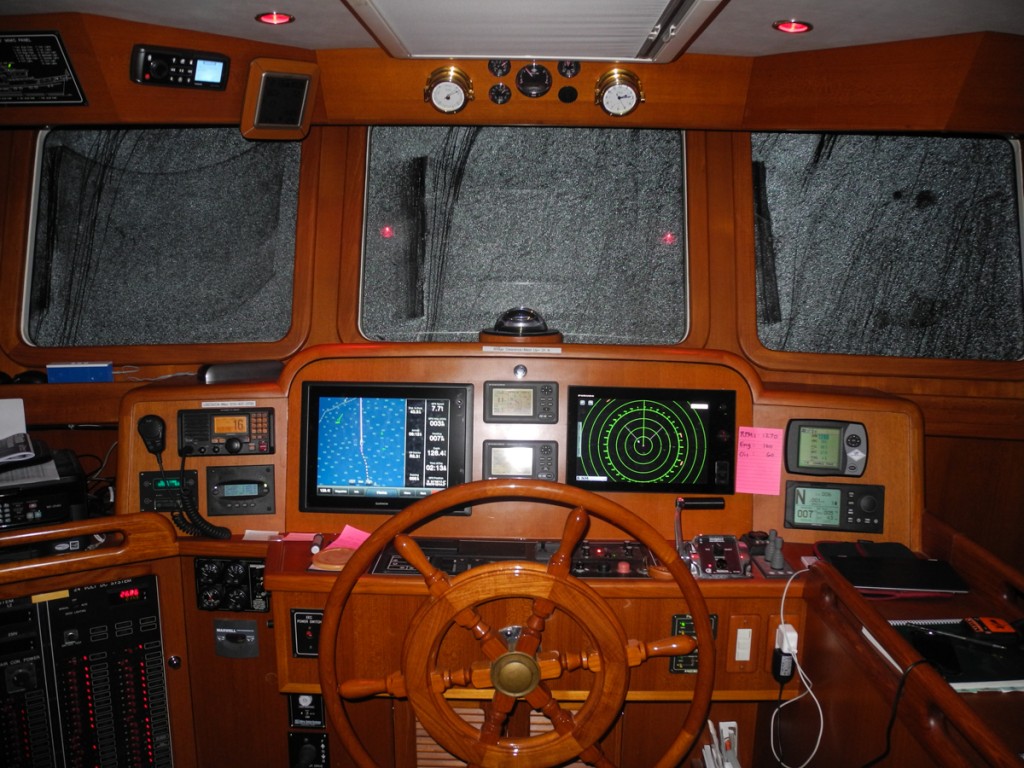 At 2 AM radar and AIS showed several ships within twelve miles all heading in different directions. The Port of Charleston is big, ranking 8th in the US in dollar value of goods handled. The entrance during the day is straight forward although you do pass container ships at very close range. At 9:30 AM we pulled into Charleston Harbor Marina, 51 hours after leaving Great Sale Cay. Our friends on Silver Heels would arrive the next day having left the Bahamas 70 miles east of our jumping off point.

Two days later we left Charleston for Wilmington NC. We arrived at the mouth of the Cape Fear River at 2 AM and had to drop the hook right off the channel for a few hours sleep before continuing up the River to Wilmington. 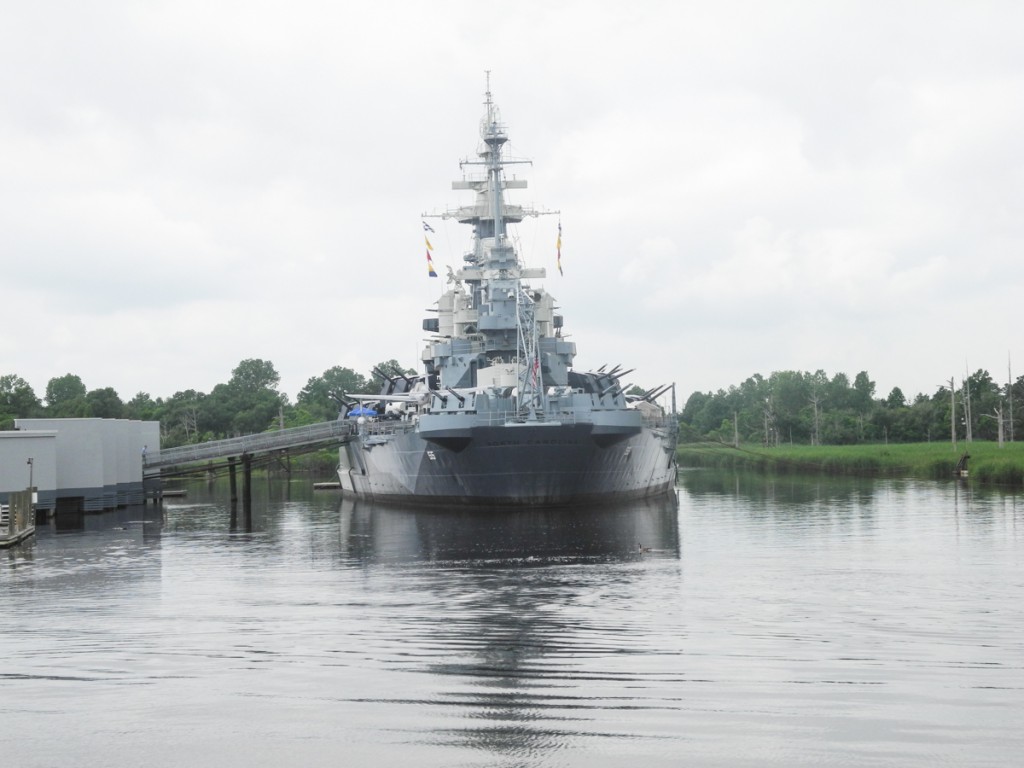 Big Smile docked in Wilmington for about two weeks while we headed north by car. On June 17th I flew down to pick her up. I left Wilmington the next day and six days later we were docked at Washburn’s Boat Yard in Solomons, Maryland. It was my first long distance single-handed cruise and all went smoothly. 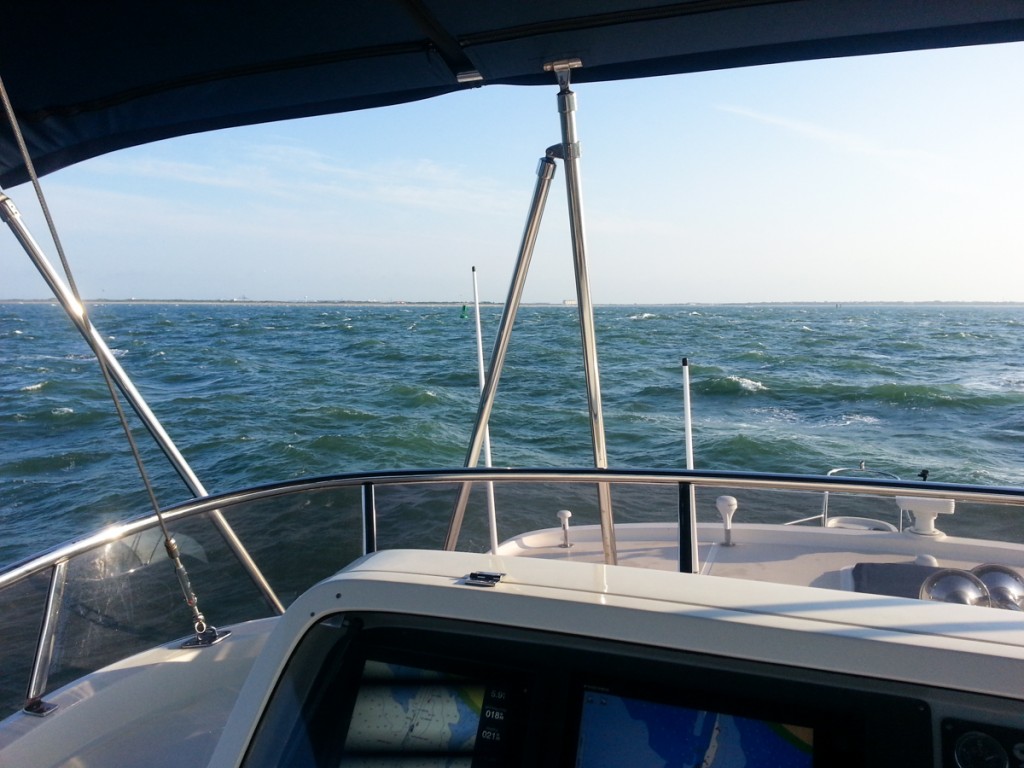 Made it: Solomons Maryland

Big Smile will spend the month of July at Washburn’s getting some upgrades and maintenance work completed. We will rotate between Vermont and Lake George. If all goes according to plan we will leave Solomons by August 1st and head to Martha’s Vineyard and beyond.