One week on the hard at Cracker Boy Marina was enough. It is a safe, friendly place but waking to sanders and the hoist each morning gets tiring. 4:30 Monday afternoon we launched. It also happened to be approaching low tide and Cracker Boys lift slip has shoaled somewhat. It took quite a bit of manhandling to get the slings past the stabilizers but after unbolting one of the slings we slipped out and anchored a quarter mile away.

Tuesday morning brought beautiful weather with light, NE winds. At 7:15 AM we weighed anchor and proceeded out Ft Pierce inlet to start our 250 mile trip up the Florida coast. The weather held throughout the day and the auto pilot steered us past Cape Canaveral. The shoals off the Cape extend out several miles and as we rounded we were treated to 8 dolphins swimming beside and in front of our bow. Cath took the first night shift and watched offshore cargo ships till 1AM. I picked it up after that and had not a single boat appear within 8 miles on the radar.

Dawn broke and the weather changed to colder NE winds. We approached St Marys entrance and heard the Navy warning all boats to stay away from a nearby Lat/Long position as they were practicing live fire. We stayed away. St Mary’s entrance is long, stretching over 8 miles from the first entrance buoy to the front range marker. It is well marked  along its path as it serves the Kings Bay Naval Base. Our destination was the anchorage on the west side of Cumberland Island. We dropped the hook about 4:30 in the afternoon. It was our longest single trip to date and all went well. 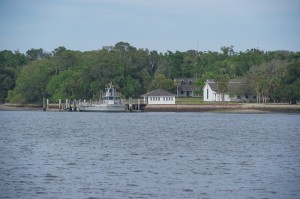 We left Cumberland Island for our final destination at Morningstar Marina St Simons, Georgia. The weather was cool and rainy but the trip up the ICW was superb. The 36 miles was well marked until you entered St Andrews sound. A couple of greens were missing providing some navigation excitement. 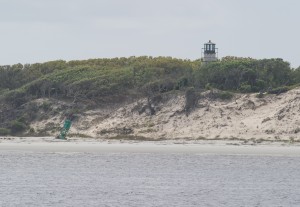 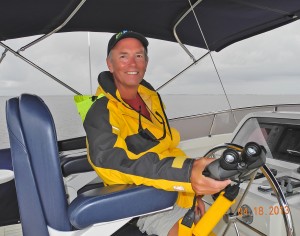 Cruising up the ICW

By 2:30 we were safely tied up at Morningstar Marina, Golden Isles. This will be Big Smiles home for the next six weeks or so while we empty out the house in NJ. We had time to spend two nights on board before driving north. Morningstar has an awesome seafood restaurant attached to it and we enjoyed a dinner there. On the next dock was a beautiful 169′ Trinity motor yacht the “Norwegian Queen”. A quick google search identified it as having lots of custom Italian Murano colored glass which can be seen in the photo below.