Arrived on Wednesday June 12 in blazing heat. 103 degrees to be exact and 100 percent humidity. Fortunately that lasted only two days and we had perfect weather for two days to explore the historic city of Savannah.

On Thursday my grade school buddy “Chip” drove over from Athens GA where he is a professor at the Univ of Georgia. Because of the heat we did our exploring with his car and since he knew the area we were able to see Tybee Island and some historic areas outside of Savannah. Chip spent the night on board and dropped us downtown early Friday so that Cath and I could get a full day exploring. 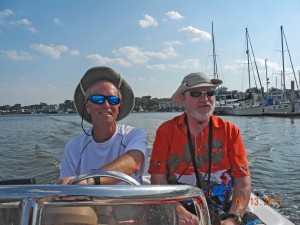 We started with an all day trolley bus pass which we have found over the years to be a great way to see and learn. We hopped on and off all day and toured several historic homes. Each trolley driver narrated in his/her own unique way and each had different facts and stories to tell along the way. “Hollywood” was our favorite driver and he kept the trolley in stitches. 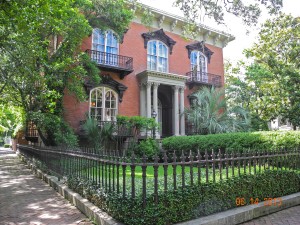 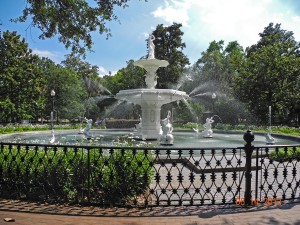 Savannah’s recorded history begins in 1733. That’s the year General James Oglethorpe and the 120 passengers of the ship “Anne” landed on a bluff along the Savannah River in February. Oglethorpe named the 13th and final American colony “Georgia” after England’s King George II. Savannah became its first city. 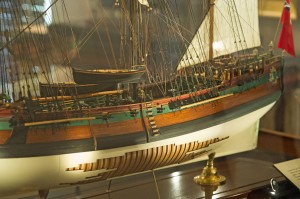 Scale model of the ship “Anne”

The plan was to offer a new start for England’s working poor and to strengthen the colonies by increasing trade. The colony of Georgia was also chartered as a buffer zone for South Carolina, protecting it from the advance of the Spanish in Florida.

Savannah is known as America’s first planned city. Oglethorpe laid the city out in a series of grids that allowed for wide open streets intertwined with shady public squares and parks that served as town meeting places and centers of business. Savannah had 24 original squares; 22 squares are still in existence today.

Savannah is an easy city to tour. Its flat and easy to walk. There are many museums and original homes to tour and all of the remaining 22 squares are unique. The waterfront is steep and is home to the original Cotton Exchange. In addition to the history eating is a favorite pastime and we managed to indulge along the way.

It is Monday morning and we are anchored on the Coosaw River. We are on our way to Charleston and expect to arrive midday Wednesday.