It’s early August. Summer always goes too fast, especially when you are having fun. No exception this year.

We acclimated to our new surroundings in Greenport, NY. That was easy to do as there is much to like about the town and the north fork of Long Island. When I was in business and needed to drive to “the island” I dreaded it. I never envisioned a way that I could ever enjoy Long Island. Less than two months in Greenport and my mind has changed.

We have enjoyed the local restaurants, the local wineries and all the local farms and roadside market stands. The scenery, yes the scenery, is outstanding. It is low and flat indeed. But the wineries and farms and historic local homes and businesses make this a special area. Friends of ours who have lived on the north fork for decades are not so happy with the influx of tourists in the summer months, but all the activity has been a boon for the local economy. There is even a lavender season which is enjoyed by busloads of Chinese tourists. Our first winery stop was Raphael Vineyard and Winery in Peconic. Some of the vineyards enjoy a good reputation and based on our experience I would say Raphael’s is one of them. Many of the vineyards also do weddings and the settings can be stunning.

Again we had the pleasure of meeting up with our friends Jim & Beth from Colorado. We met them on Block Island for three days of fun. The timing was interesting as it was Block Island Race Week. On our motor over we passed thru and by at least four classes racing to the west of the island. 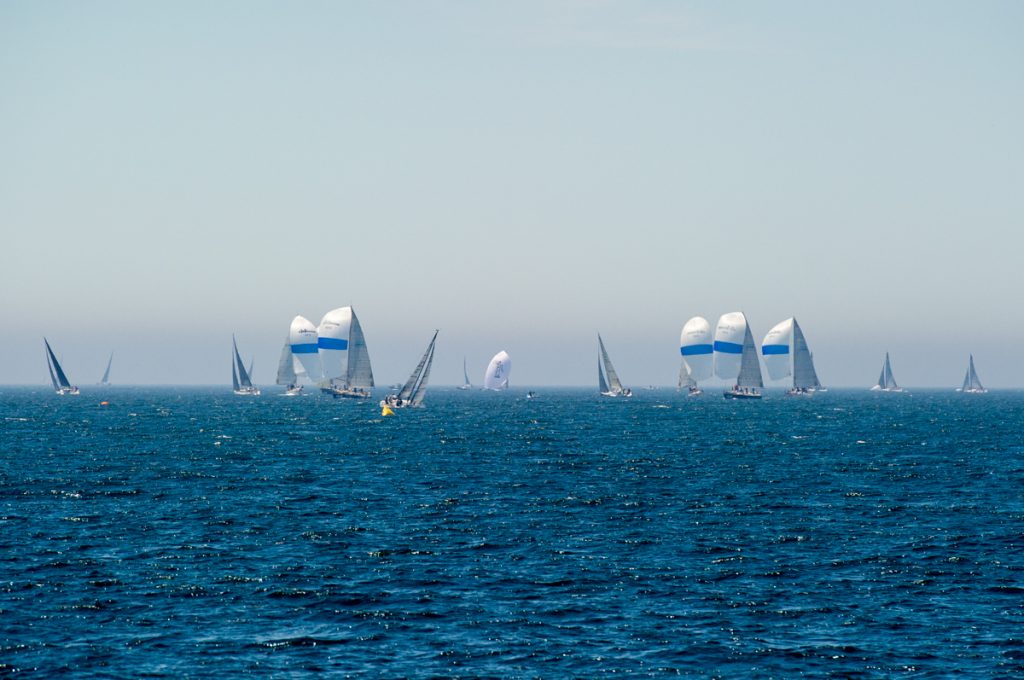 The weather was perfect and as Beth’s family has roots on the Block dating back hundreds of years, we also had a great guide so we rented a jeep for the day. Beth drove us all around the island, including to the old cemetery where some of her relatives are buried. 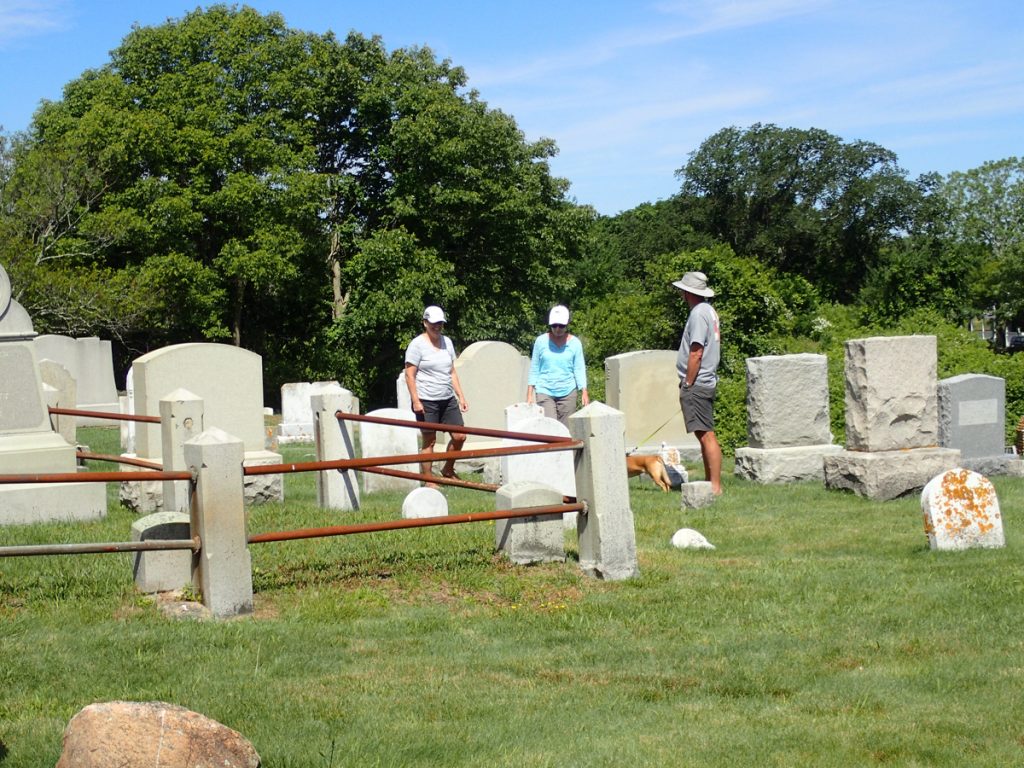 The north end of the island has a beautiful spit of sand extending far out into the sound. In 1829 the North Light was built to warn mariners. It’s a fun walk and the picture below was taken just before Beth stepped on a rusty nail. It was around 4PM and we found the only clinic on island. Two hours and some shots and Xrays later all was well.

Sandy Point on the north tip of the Block 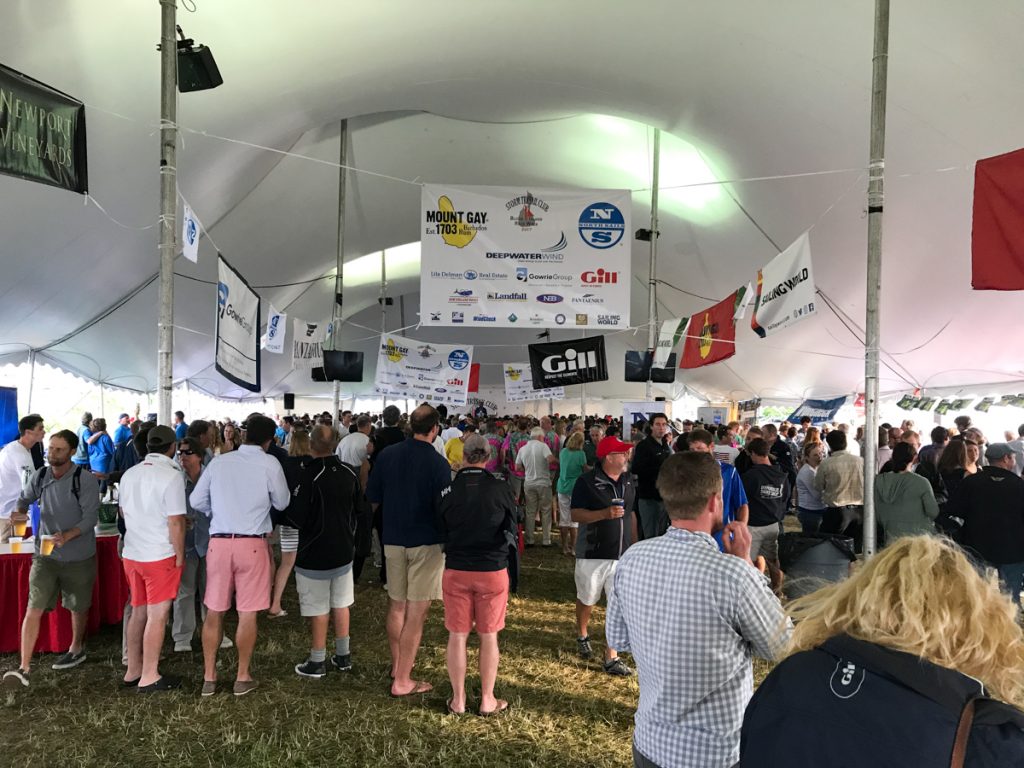 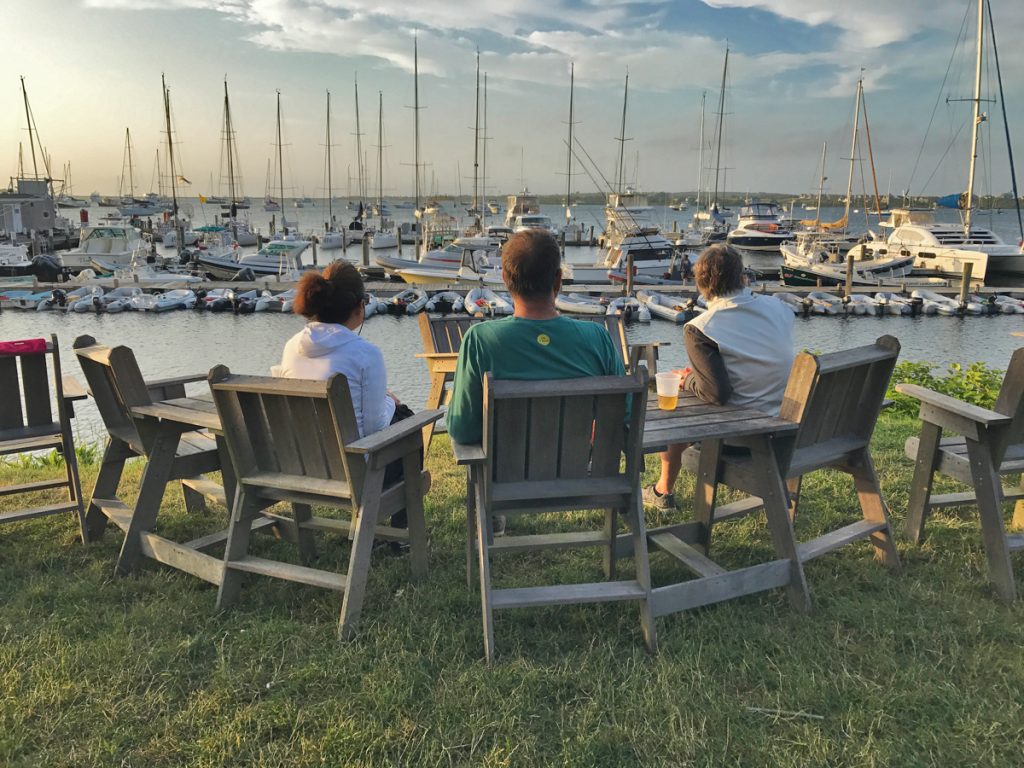 Back to Greenport we motored. In the space between Block and our upcoming three week trip we got ourselves back to Warren, RI, to visit with Barry, Rebecca, our niece Eileen and husband Jamie, and their new baby, Jordon. 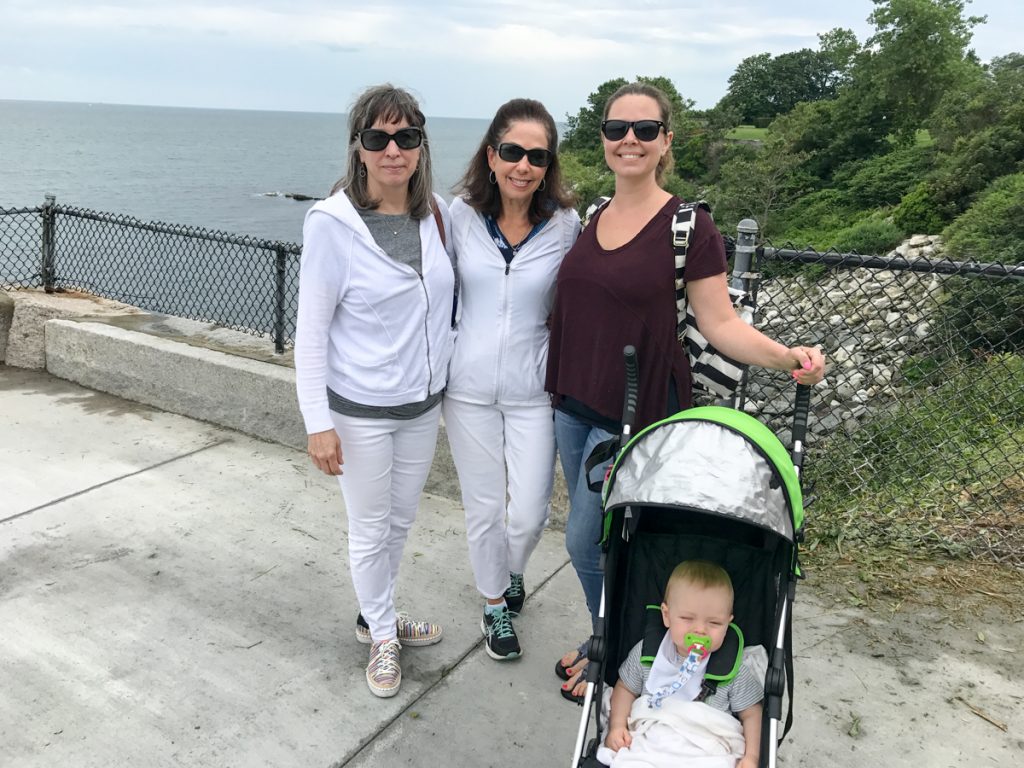 From Warren it was up to Vermont for several days, including the July 4th weekend. We managed to see the musical show “Once” at the Weston Playhouse. We brought our neighbor Dana, and she and Cath were able to dance on stage with the cast prior to the show. 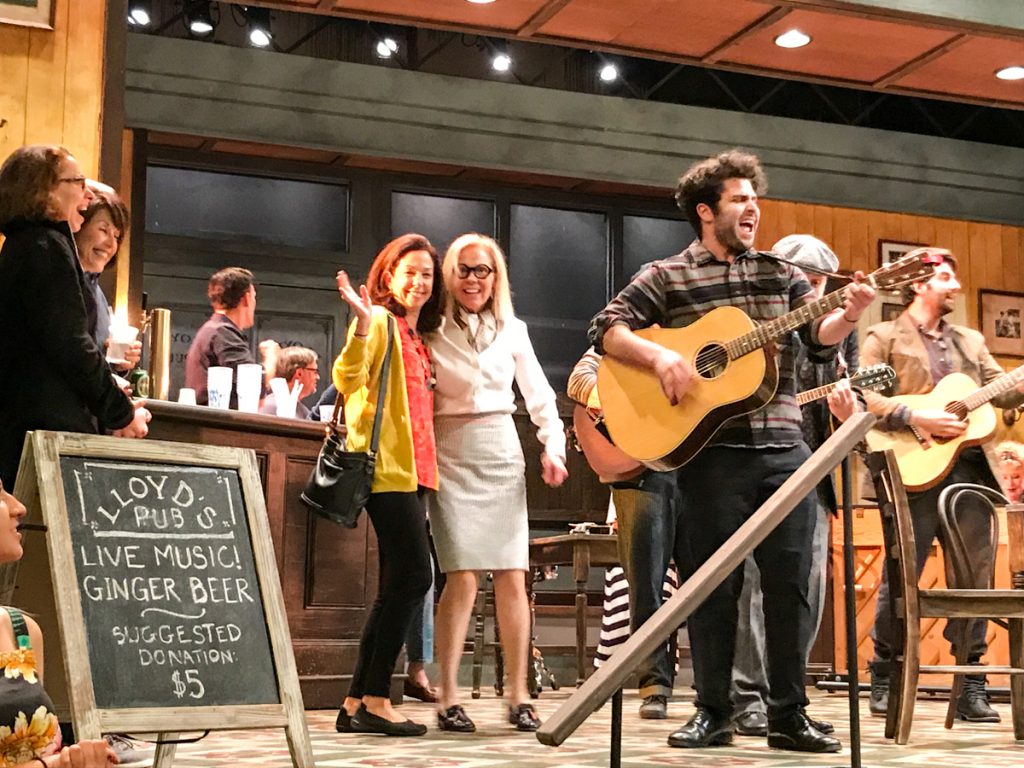 Our good friends and ex-Lake George neighbors Bob and Tibby visited us for the first time in Vermont. We had fun showing them our historic town and they especially enjoyed the infamous Vermont Country Store.

We even got to see the Londonderry 4th of July parade and the fireworks at Magic Mountain. 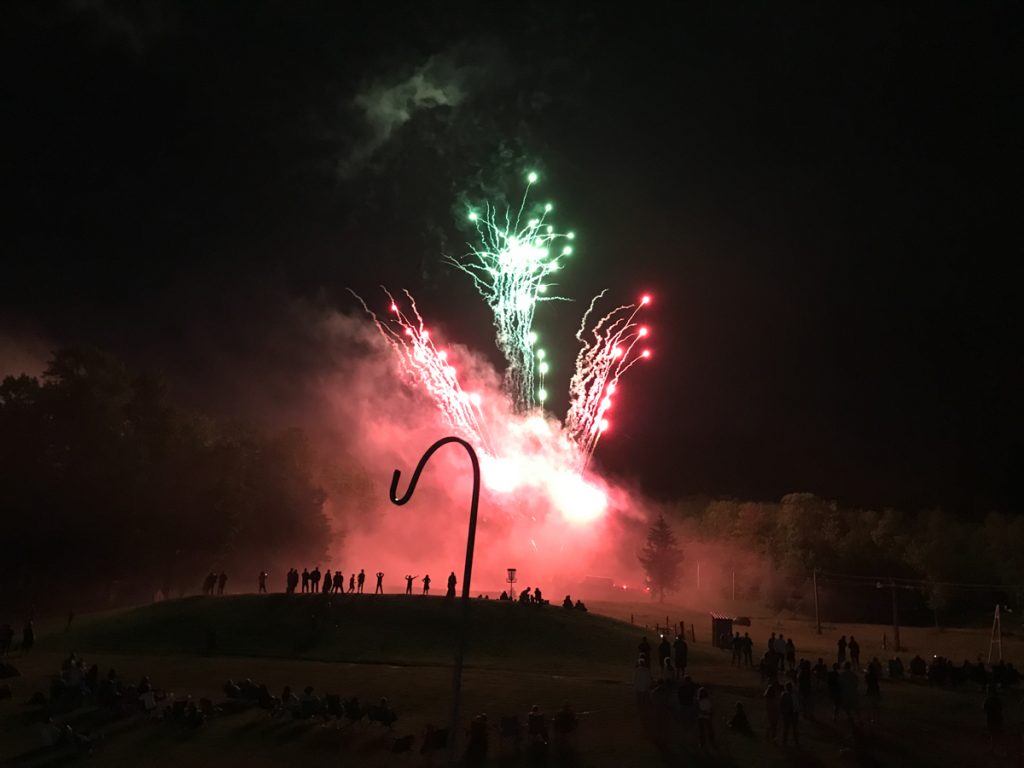 Back to Greenport we traveled to spend the actual 4th of July in town. It’s easy to see the cultural differences between Vermont and Long Island, isn’t it? 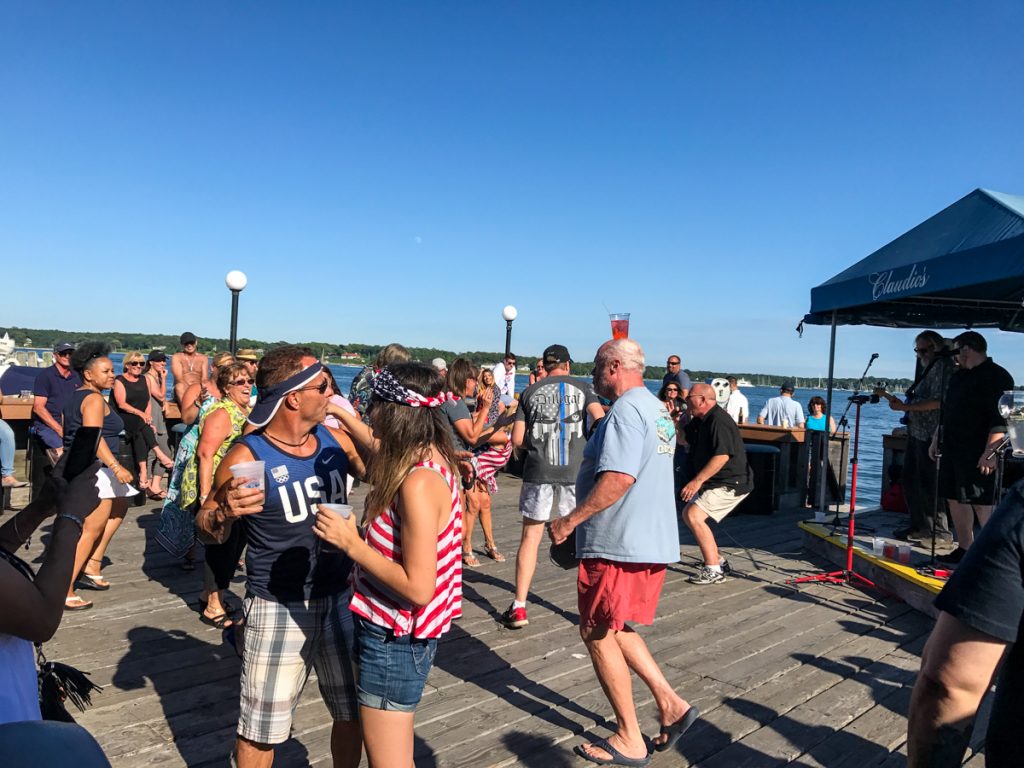 The 4th at Claudio’s in Greenport

Our first Greenport guests came out for a night. Our friends Dennis and Norma, now retired in Arizona, were in for a wedding but joined us for some Long Island wine and food. 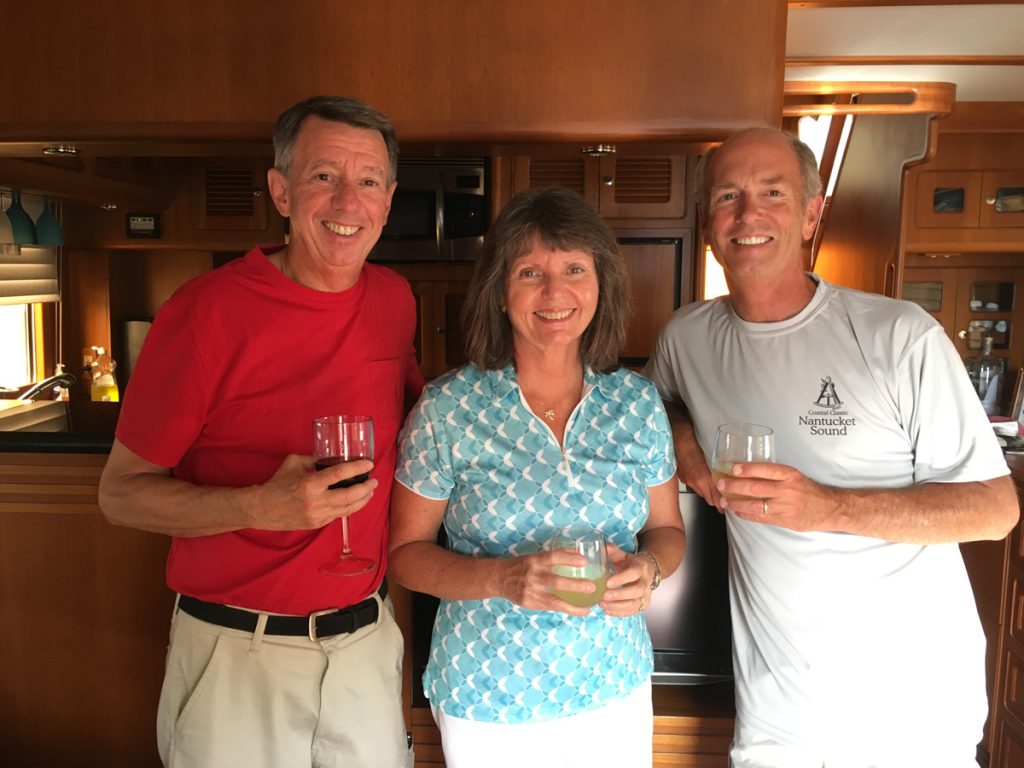 Dennis, Norma and me

If you live on a boat you better be prepared for mechanical problems. I love figuring things out mechanically, but not more than the group we visited one weekend. The Long Island Antique Power Association held a weekend-long event which included a large showcase of old farm and construction equipment, old pumps, a sawmill and a tractor pull. It was a blast and our very first tractor pull. 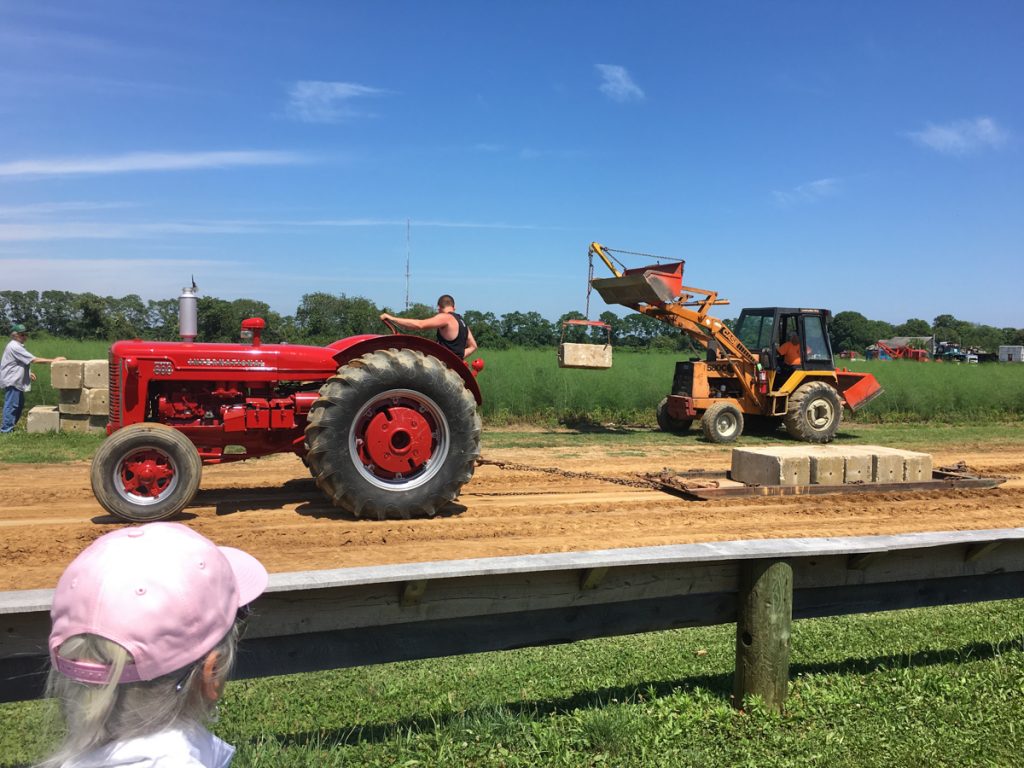 An International tractor pulling a couple thousand pounds of weights 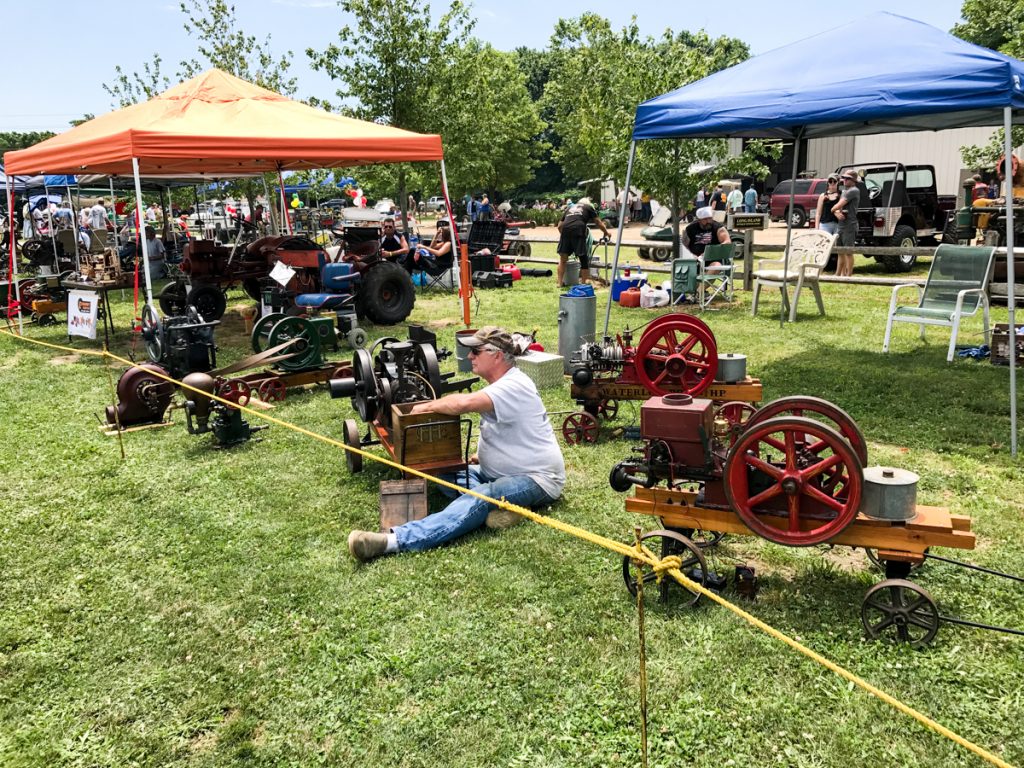 How much more fun can a girl have?

Our friends Rick and Sandy took us for a long tour of Peconic Bay which they know well as they have lived out here for decades.

We also found some fabulous places to kayak in East Marion and Orient. Many of the areas are open to clamming which means the water is pretty clean and inviting.

Our big trip for the summer started in mid-July. It was to include Martha’s Vineyard and Nantucket. We left our marina in cold, nasty winds with the goal of anchoring off Cuttyhunk Island. Buzzards Bay was roiling and the Cuttyhunk anchorage was untenable so we bounced across the bay to the protected but not particularly scenic Clarks Cove.

Since it was the heart of the summer, we had planned ahead and made reservations for moorings and slips on both islands. Edgartown on the Vineyard was stop one and we picked up our assigned mooring. The Edgartown Harbormaster runs a tight ship and provides a quality mooring. Unfortunately the town dinghy dock is tiny and something they really should remedy.

Scrambling at the dinghy dock

My second cousin, Kelly, lives on the Vineyard with her boyfriend Jay. They invited us to spend a beautiful Sunday afternoon with them at the beach, followed by delicious Bloody Marys at the Seafood Shanty’s outdoor bar overlooking Edgartown Harbor. 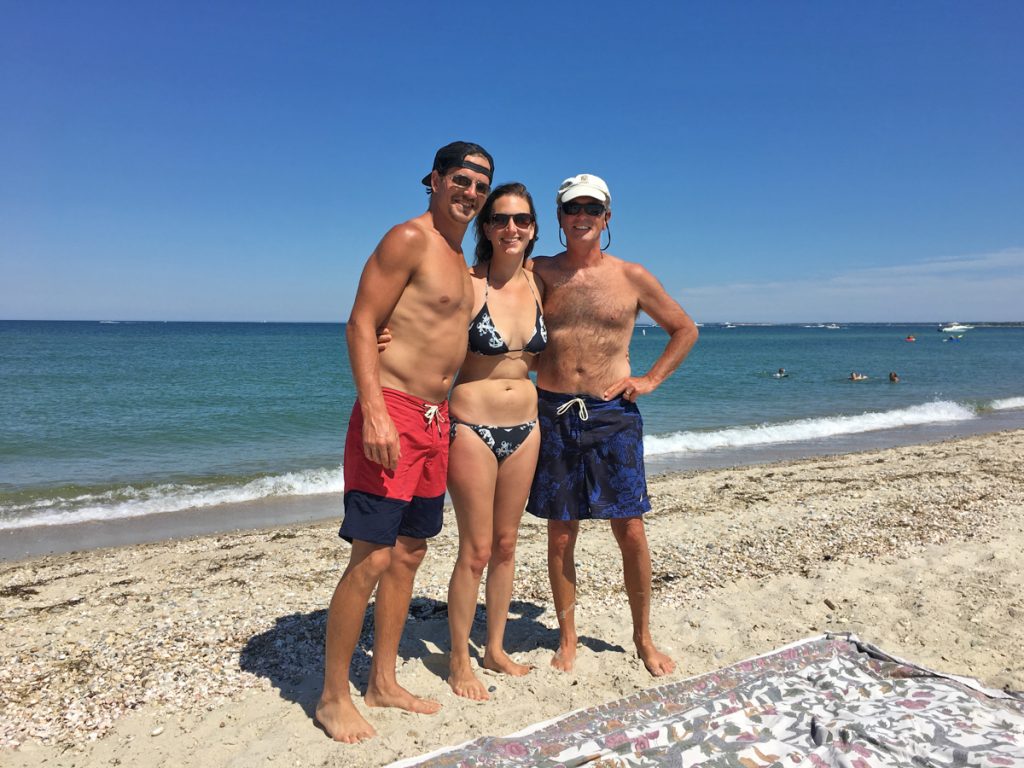 Cath and Jay at the bar overlooking Edgartown Harbor

On each island we had guests arriving. Pete and Kathy took the ferry over from the mainland to Oak Bluff and met us at the bar with Kelly and Jay. They spent four days with us, starting in Edgartown and moving over to a slip in Vineyard Haven. Renting a car was a good idea and allowed us to explore the entire island. We visited Gay Head Light for the first time. The original structure was built in 1799. Subsequent structures replaced the original and in 2015 the existing lighthouse was moved 129′ back from the cliff face. 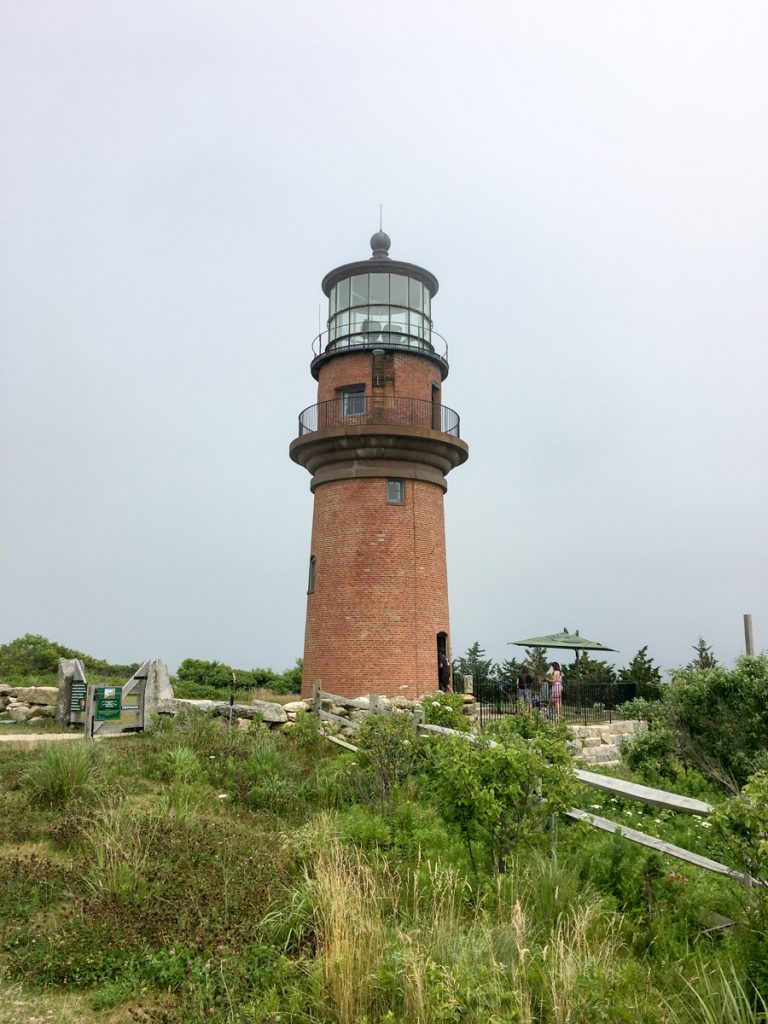 The town of Aquinnah (formally Gay Head) is known for its clay cliffs. Its original inhabitants were the Wampanoag, a native American people related to the Algonquin nation. The cliffs are magnificent and according to the sign posts, off limits. 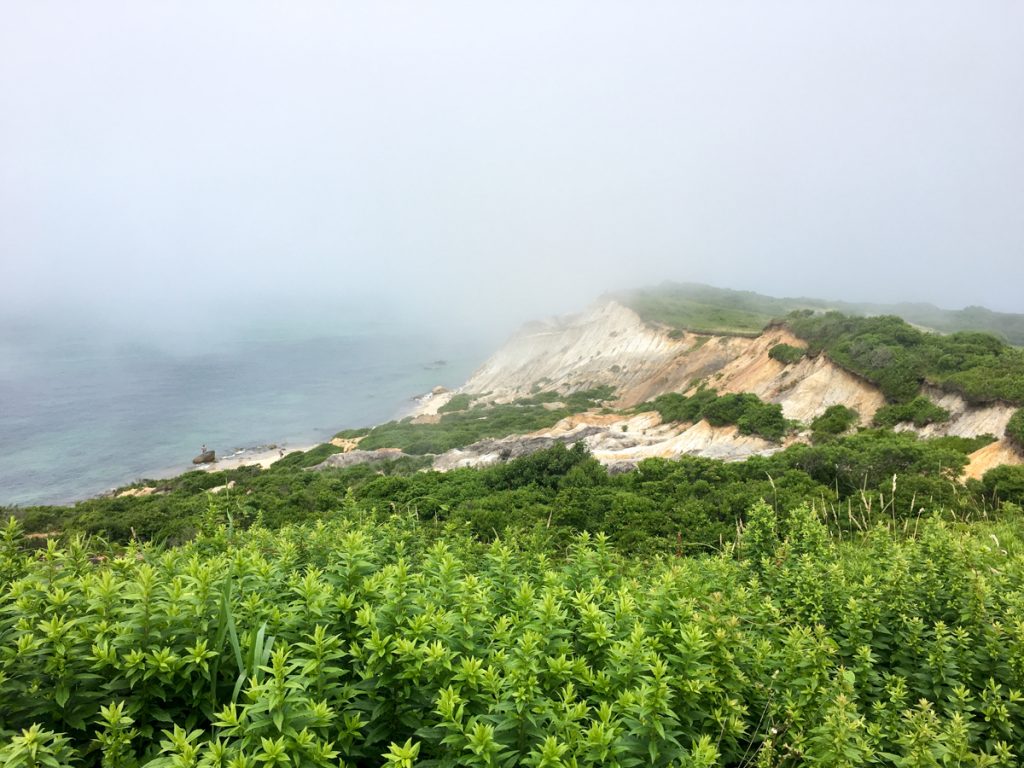 The cliffs in the fog

Since we had the car for only 24 hours, we continued our trip around the Vineyard and eventually made it on to the “Chappy” Ferry that transports people, cars and bicycles to the island of Chappaquiddick. It was our first visit to the island and its infamous bridge. We did not realize that the beaches on Chappaquiddick were so nice and more isolated than on the Vineyard. 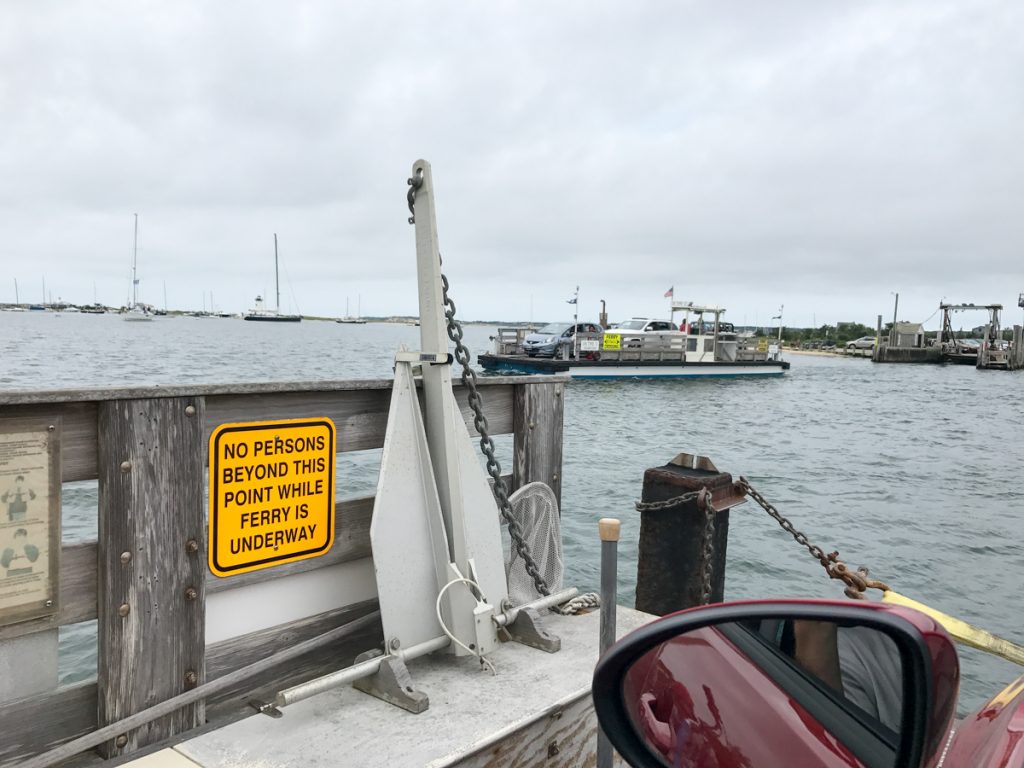 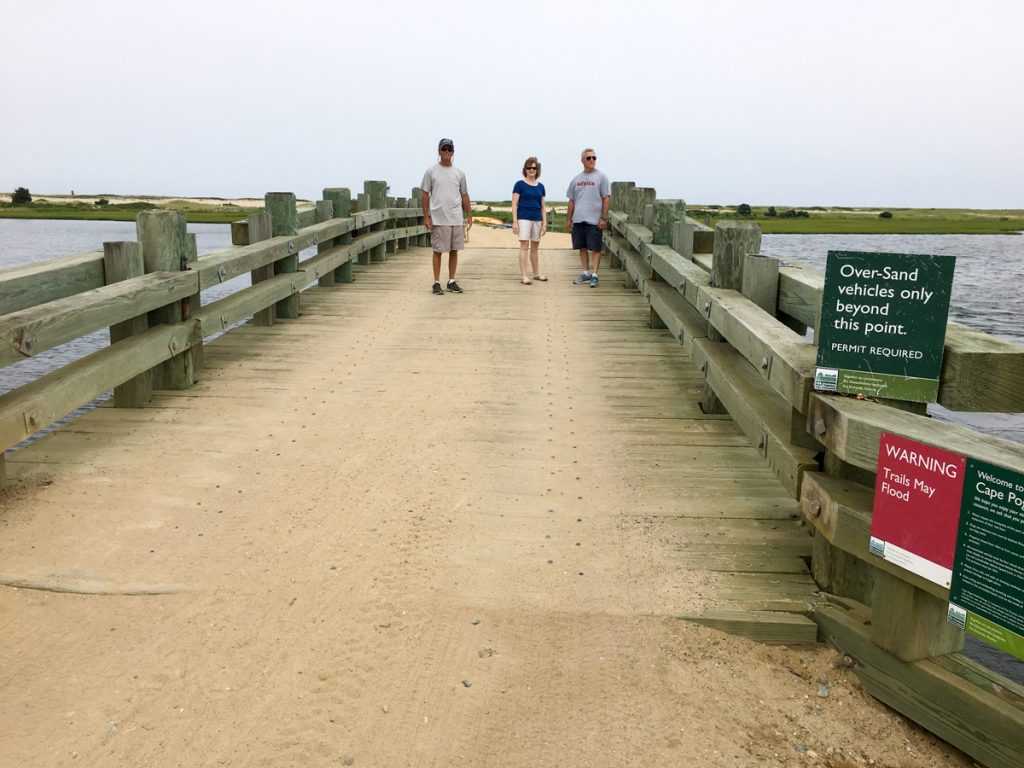 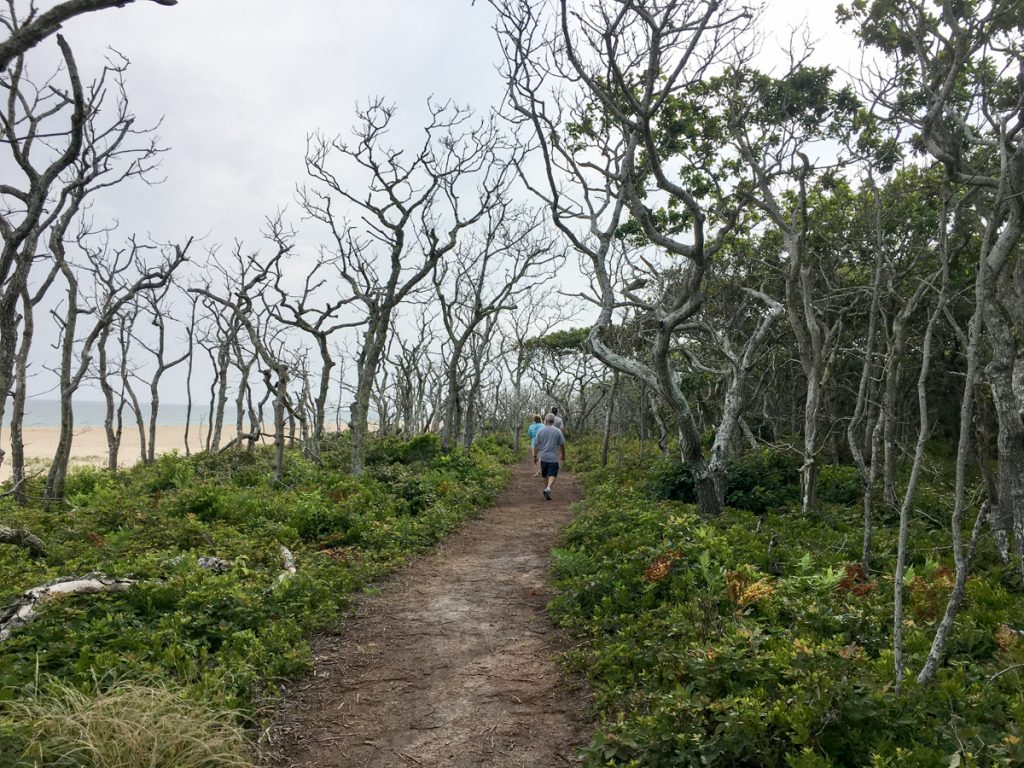 Path along the Atlantic shore of Chappaquiddick

From the Vineyard we headed over to Nantucket. We had a day to regroup, resupply and cleanup before meeting up with Tara and Andrew, who were flying in to spend eight days onboard with us.  Jet Blue has direct flights from Washington’s Reagan Airport to Nantucket.  The Nantucket Memorial Airport is small and easy and just outside of town.

Our first several days together were at a mooring in Nantucket Harbor and then we moved into a slip at Nantucket Boat Basin. Neither Tara nor Andrew had been to the island before so there was much to see.  We started by renting a 4×4 Jeep with the obligatory, over the sand, beach permit. We love the island, especially its history and classic architecture. The only drawback is the expense. Everything costs, and dearly. I was able to justify the ridiculous four-day jeep rental price but with no place to park it, I had the choice of a $40/night parking lot or a $50 nightly ticket. Out of principal, I mixed it up each evening. 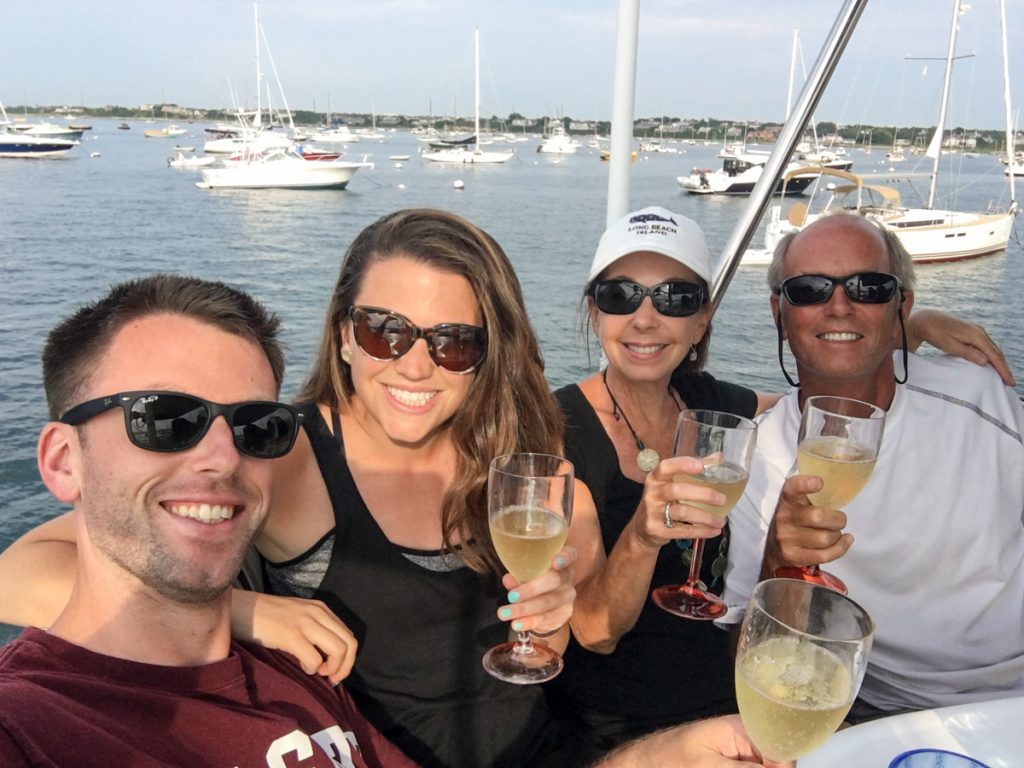 The longest stretch of summer beach driving is along the shore on the northern tip of Nantucket. The beach drive to Great Point Light is a fun adventure. Unfortunately for one fishing group we encountered, something happened to their motor and sadly they got washed ashore. 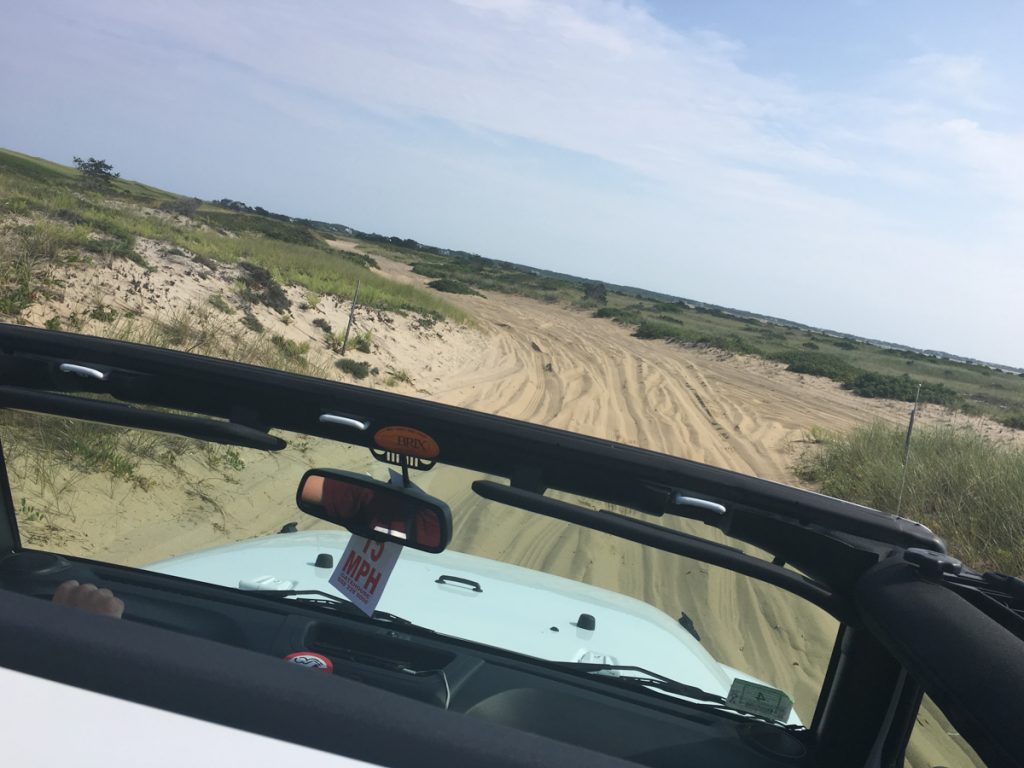 Driving on the sand 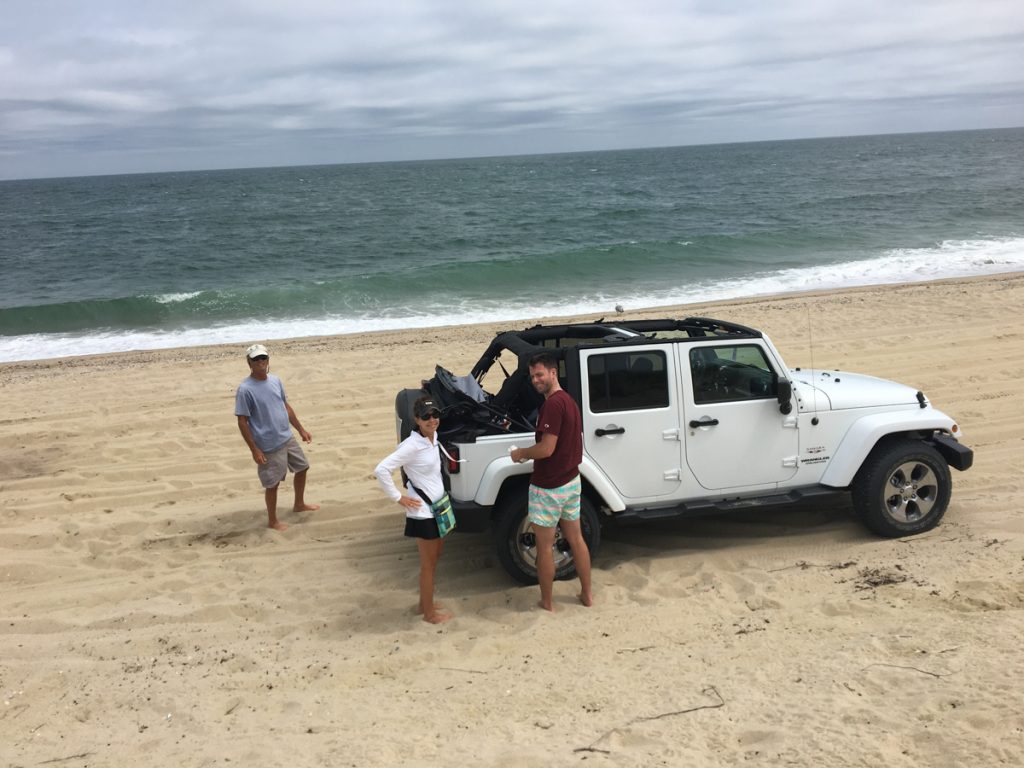 Not what you want to see

The town of Sconset on the southeastern shore dates to the 1600s. There is a very nice “path along the bluff” high above the beach. The legal status of this path stems from decisions first made in the 1800s and its status has withstood the test of time and courts. It is a spectacular walk.

Path along the bluff 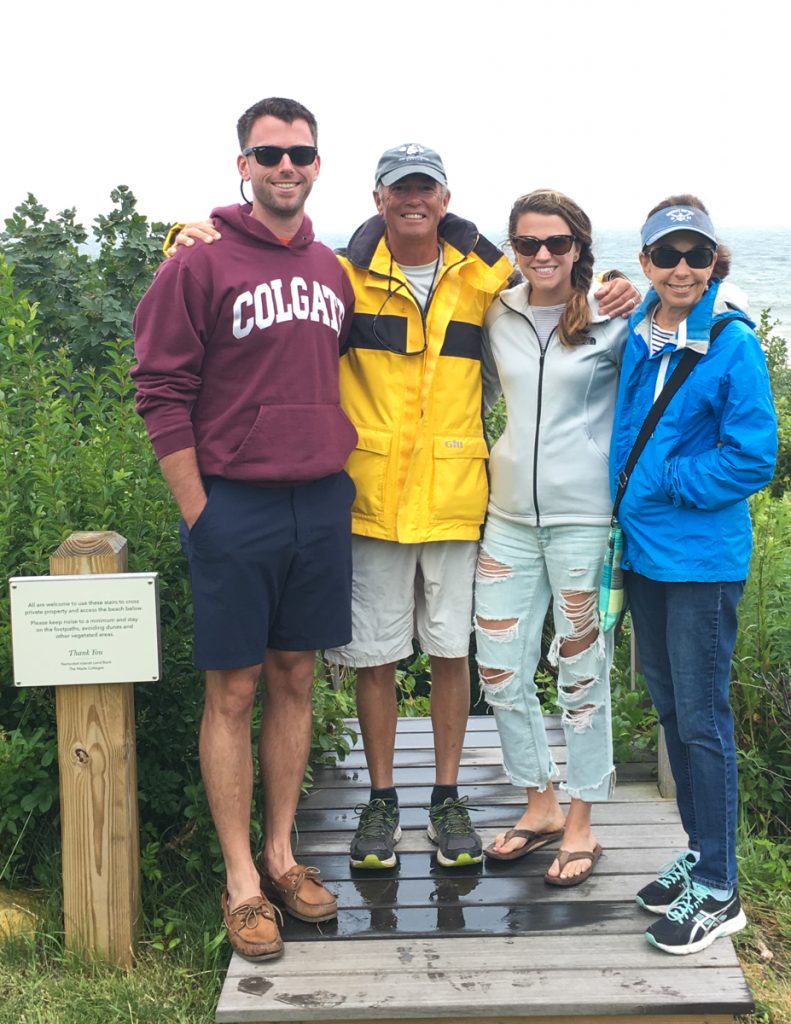 Path along the bluff

There is a brewery on Nantucket which is also a winery and distillery. It provides all of your needs in one location — good beer, food trucks, live music, wine, spirits and a gift shop. 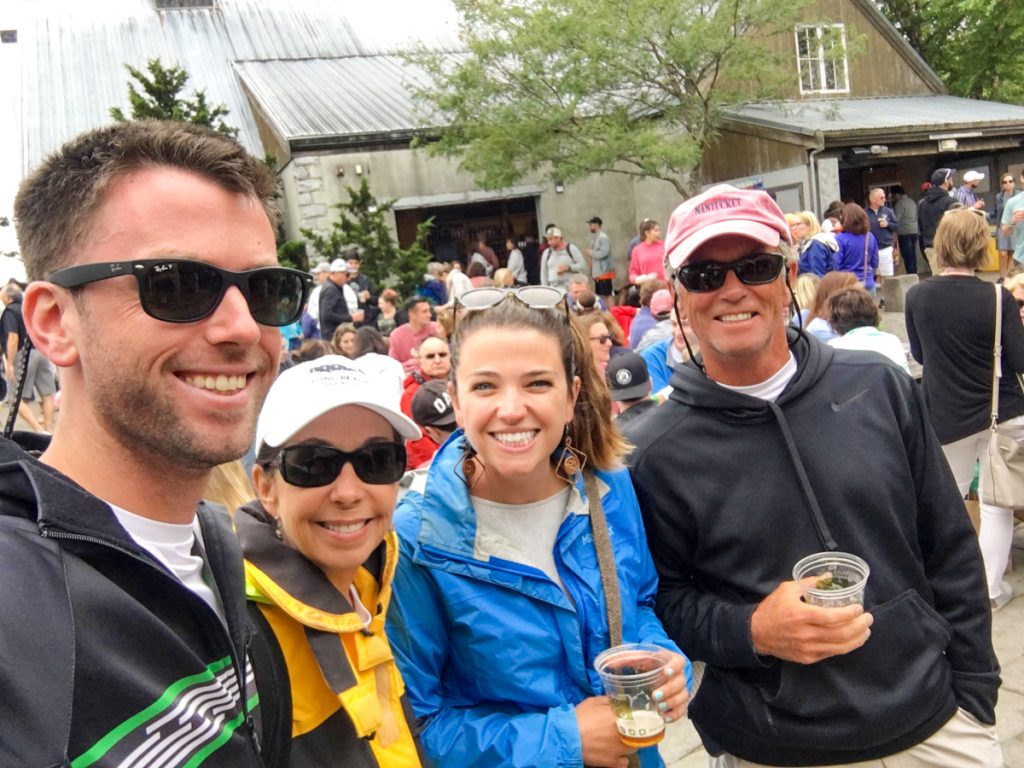 Dinner at “Dune”. Our waiter behind Tara. Don’t know who did his hair? 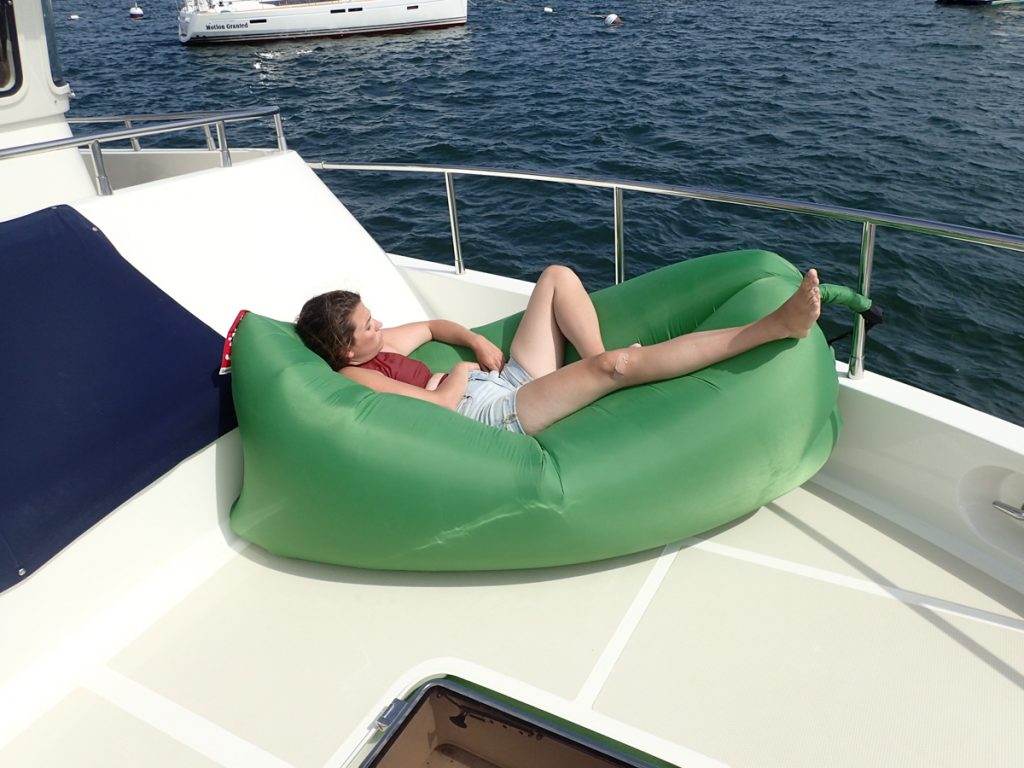 The day after dinner

We all had a great week. The weather was varied but not much rain. The beaches were perfect, the food was good, the drink was better and it was fun. 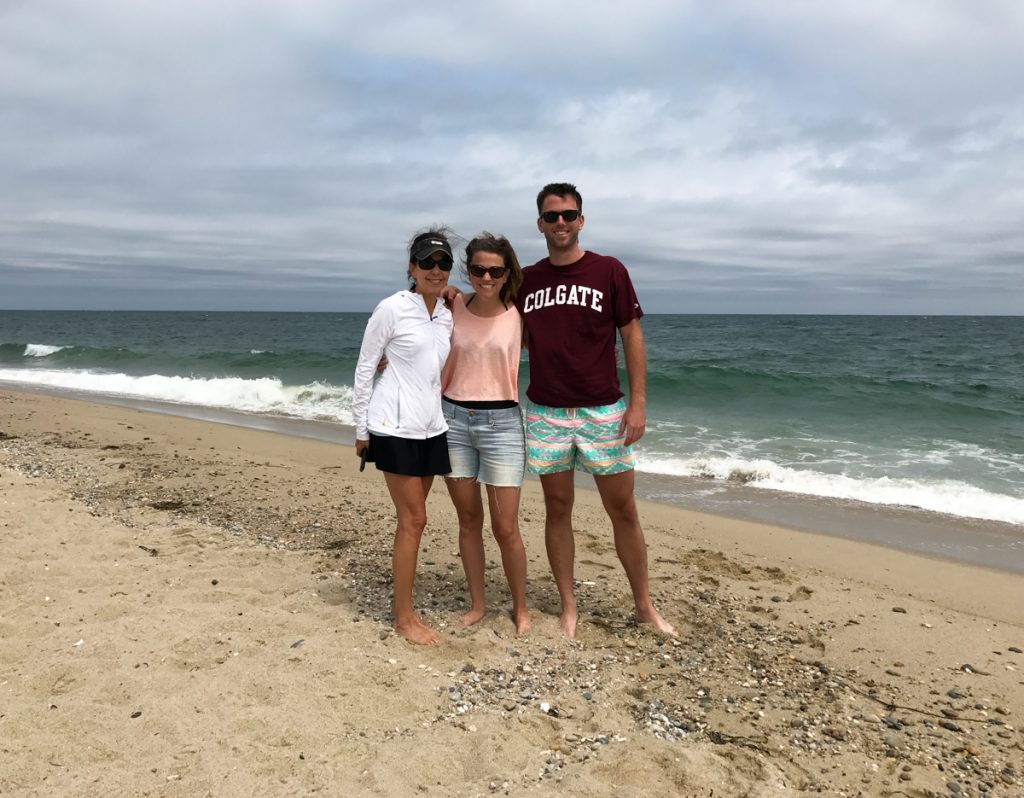 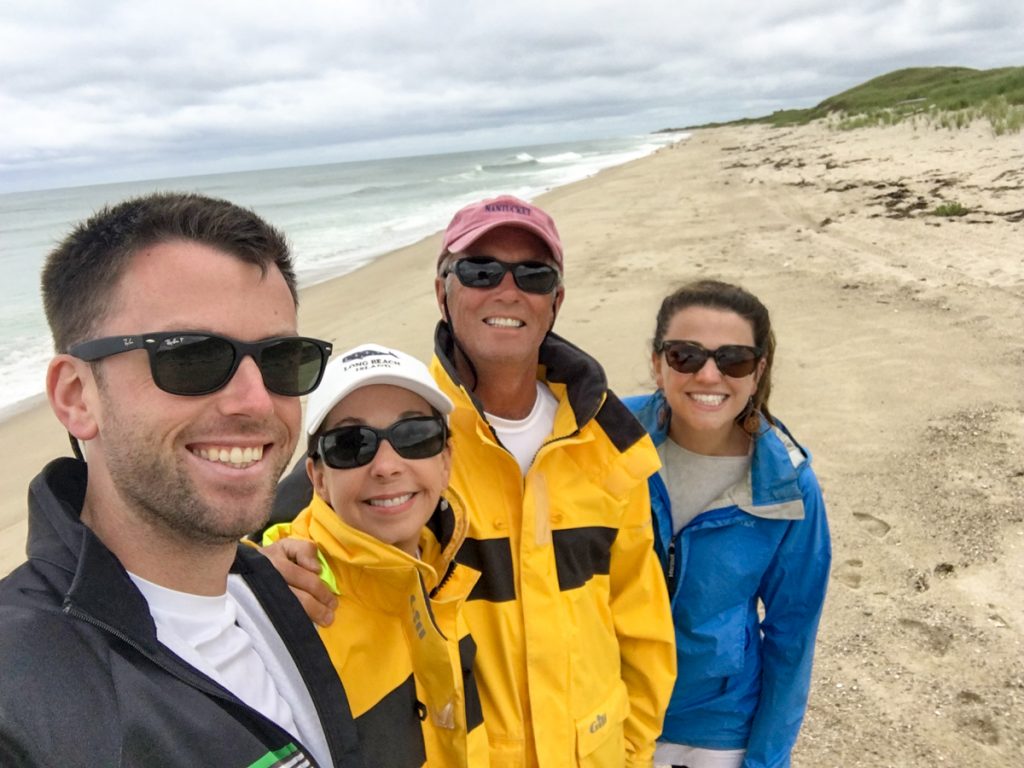 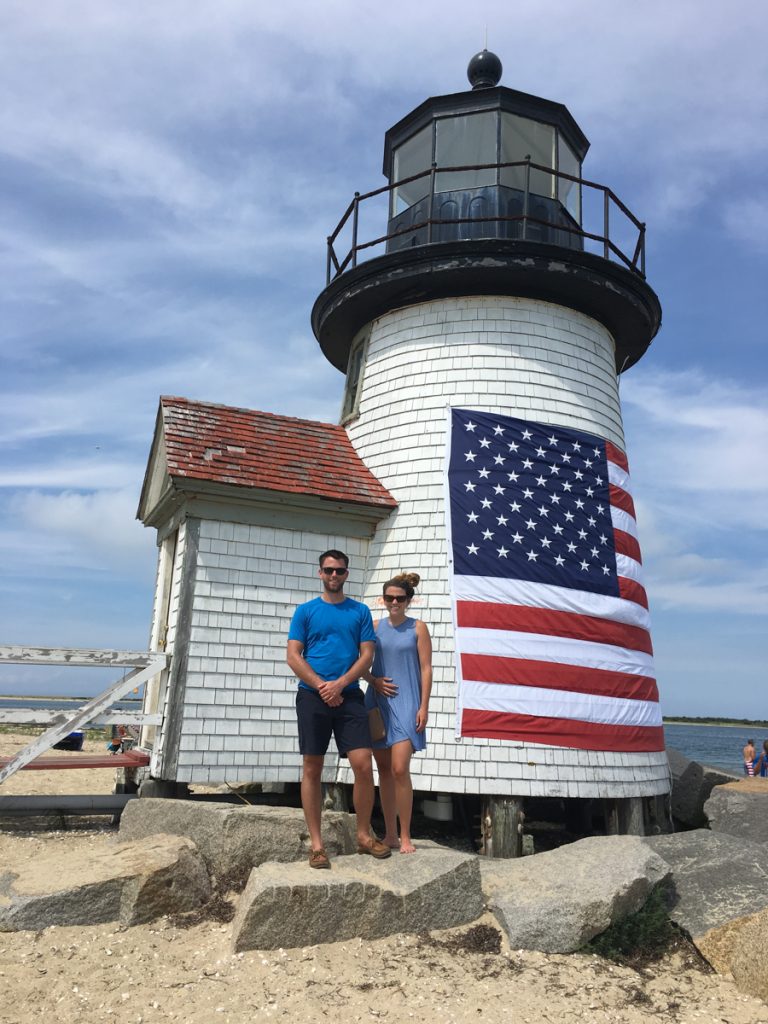 The end of July and vacation is over