A couple of months have slipped by and Big Smile has made it to Greenport, NY, on the north fork of Long Island. Brewer Stirling Harbor Marina will be our home base for the summer. We haven’t had a dedicated home summer slip in two years. We stopped here for two nights last fall while cruising south from Maine and decided it would make a good home base. Greenport and the North Fork — “NOFO” as the stickers say — has lots to offer and we’ll cover that in our North Fork posting. But this post is about our trip north. It was eventful, fun and safe.

The trip through the Keys was less interesting than we expected. Our first stop after departing the Dry Tortugas was Key West and there we had a great time. Friends of ours happened to be visiting from NJ and we were able to get together on the one night we overlapped. Key West is a funky town for a couple of nights. The bars can get rowdy and there are some excellent restaurants, including Santiago’s Bodega where we enjoyed an outstanding tapas dinner. Our three nights at Conch Harbor Marina were just enough. 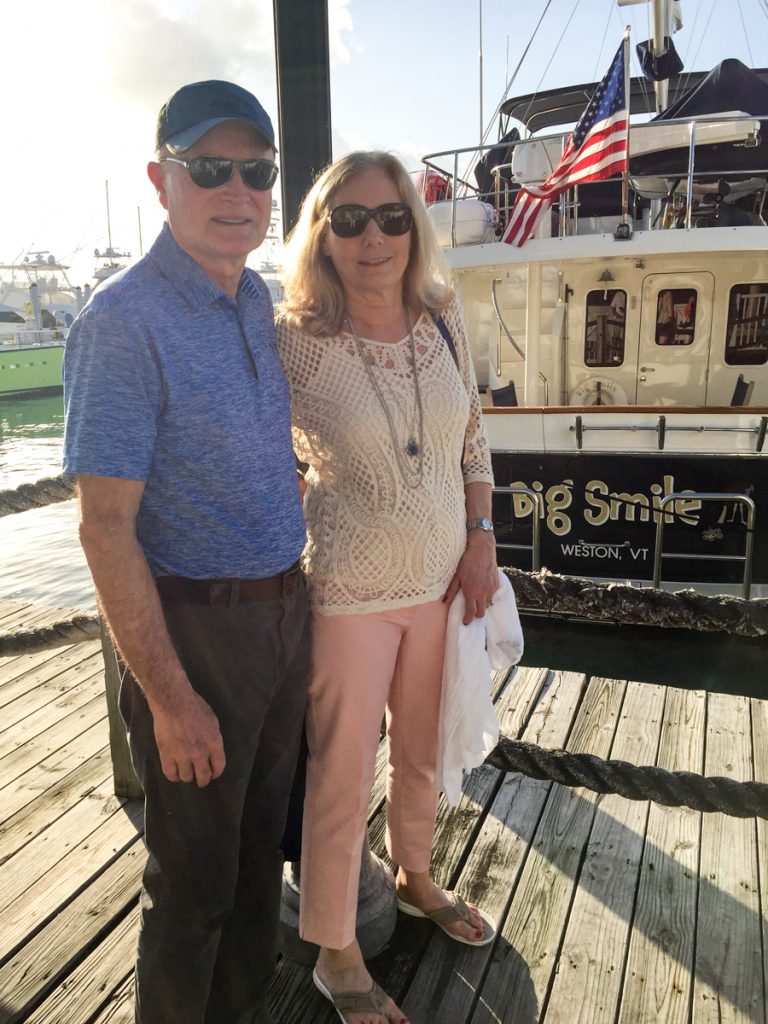 Our friends from NJ Gordon and Janet 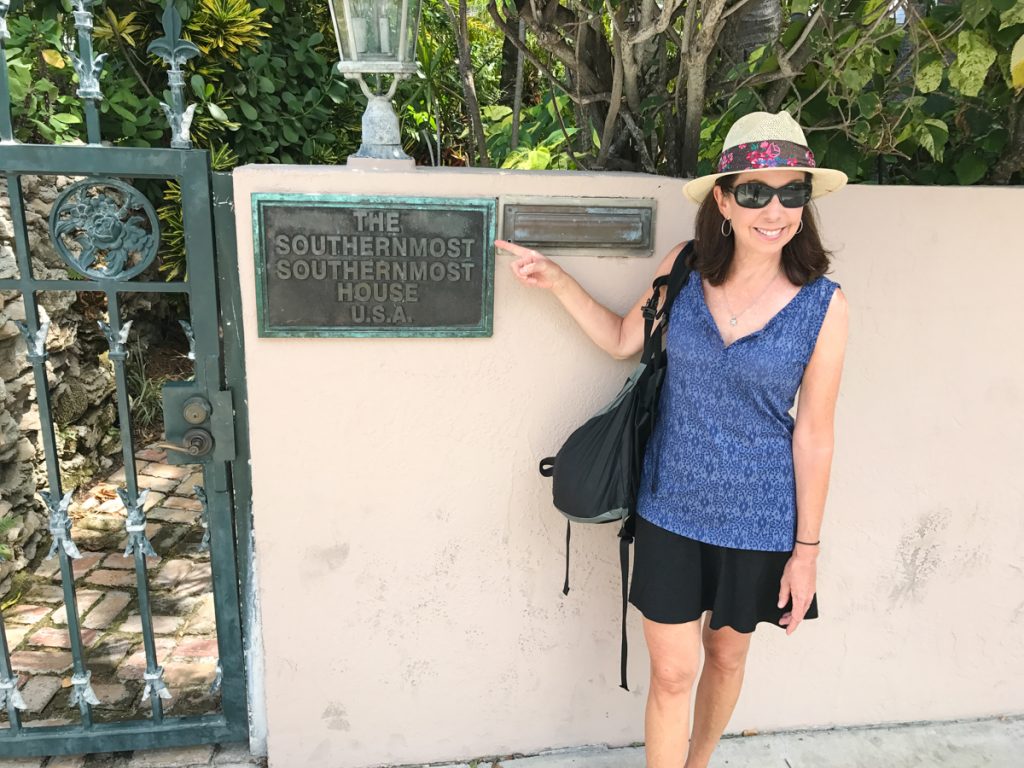 Rockin at the Hogs Breath Saloon

We were scheduled to be at Cable Marine in Ft. Lauderdale in five days so we left Key West and cruised up the Hawk Channel. This channel, on the east side of the Keys, provides deeper water than the ICW on the west. Unfortunately there are not a lot of deep water anchorages but we did find two along the way before entering the waters behind Key Biscayne. 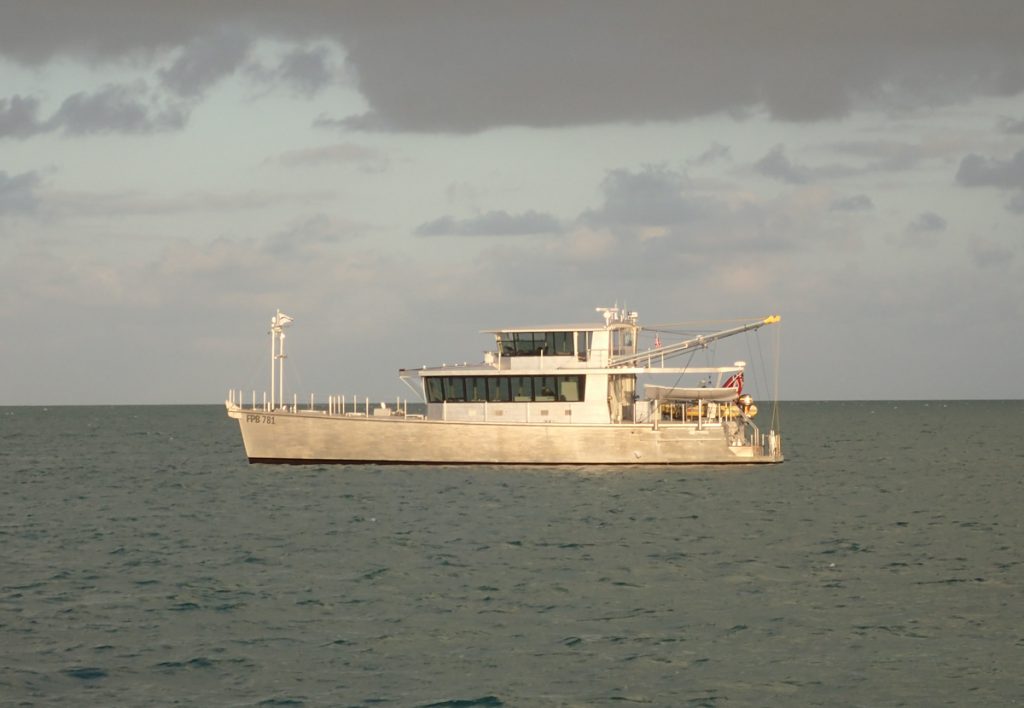 A funky all aluminum boat anchored next to us

Key Biscayne is an island town that lies southeast of Miami. It is a popular anchorage on the weekends. The boats at anchor have the moniker “the Cuban Navy”. We spent a Saturday night anchored there and had no problem.

We spent our second night anchored near the Miami Yacht Club which provided some great dinghy cruising and a beautiful Miami sunset. 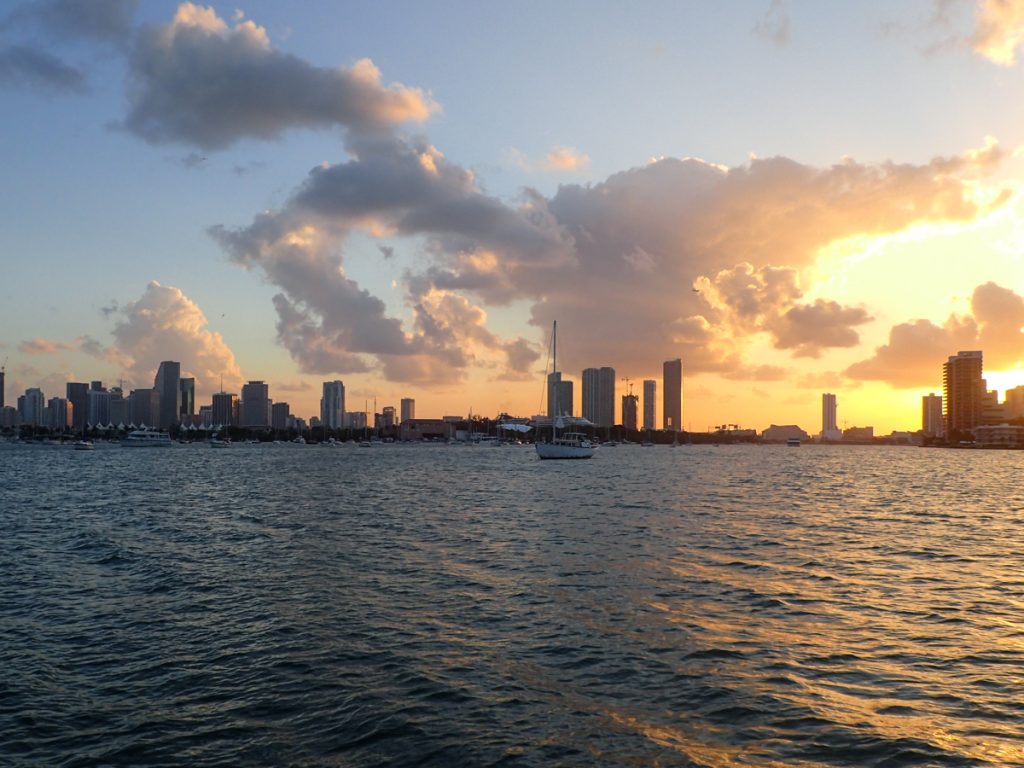 Leaving Miami, our goal was an easy trip up the Atlantic to Ft. Lauderdale. Unfortunately the weather was blowing stink, with strong winds and steep seas so we opted for the slow crawl up the ICW. Miami to Lauderdale is not scenic and has numerous bridges that must be raised for our 31′ air draft. It’s generally deep water, however, it is not ALL deep as we learned the hard way. Baker’s Haulover Inlet is a man-made channel connecting the northern end of Biscayne Bay and the Atlantic Ocean. It is subject to extreme shoaling, so some of the buoys are not shown on the charts as they are moved often. It was a busy, Easter Sunday and numerous small boats were out. The green markers were in place and there appeared to be plenty of water. There was not. We bounced off the bottom about six times but managed to plow through without getting stuck. While the bouncing was severe, I figured it was only sand and probably just scraped a lot of paint off the keel. We were to learn in a couple of days that the damage was more extensive.  We made it to the Ft. Lauderdale side tie slips and spent the night. We like the town and the town slips. 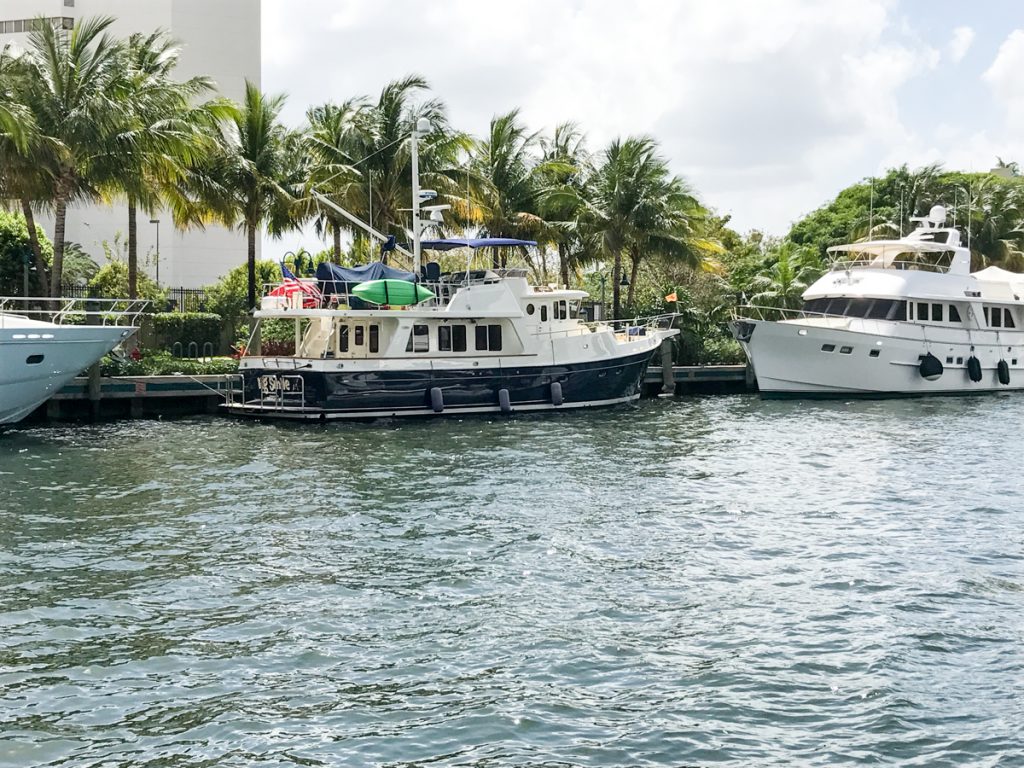 Our slip on the New River in Ft. Lauderdale

Cable Marine, our Lauderdale destination, was located a few miles up the New River in an area known as “marina mile.” It is a fascinating couple-hour trip with numerous draw bridges and many mega yachts being towed to and from marina mile. It is also serpentine and narrow so you spend a lot of time on channel 9 talking to other captains to anticipate where on the river you might meet. We made it in 2.5 hours. Big Smile was scheduled for a haul out. Engine, generator and stabilizer work was scheduled. So was bottom painting. We had plenty to do in the anticipated two plus weeks of work including a wedding in South Carolina.

Two days after dropping off Big Smile we flew our separate ways. Cath to Arizona and me to Vermont. We would meet up five days later to start our car trip to Savannah, Hilton Head, a wedding in South Carolina and St. Simons Island, Georgia. Somewhere during that trip we got news and photos showing the damage to the keel. The fix would require dropping the rudder to properly repair the damaged keel section. And it would also require an additional ten days on the hard. 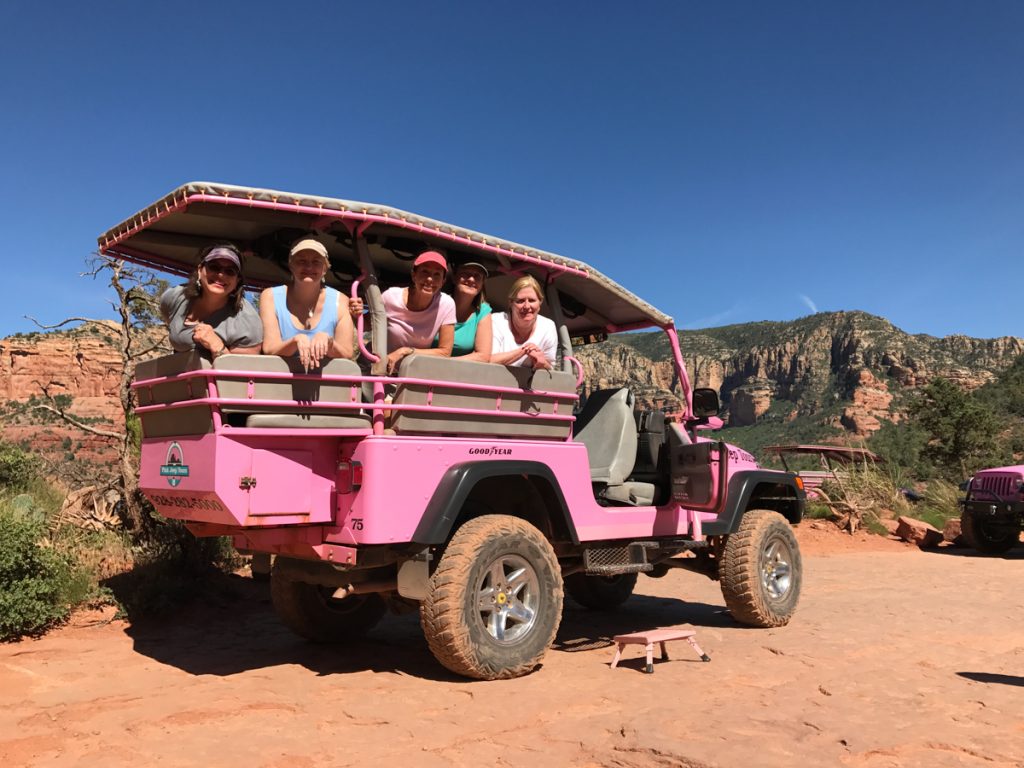 Cath and girlfriends in Arizona 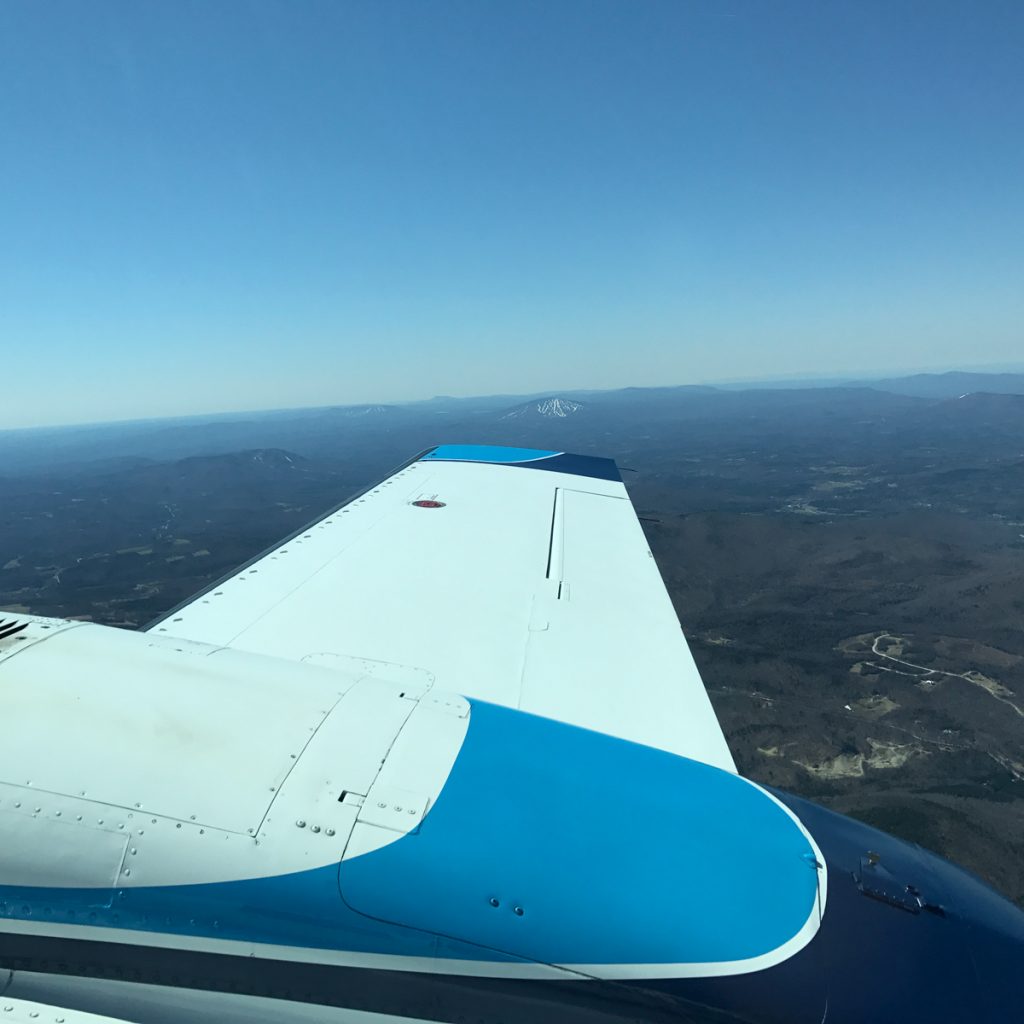 Cape Air out of Rutland with Stratton Mountain off the wing 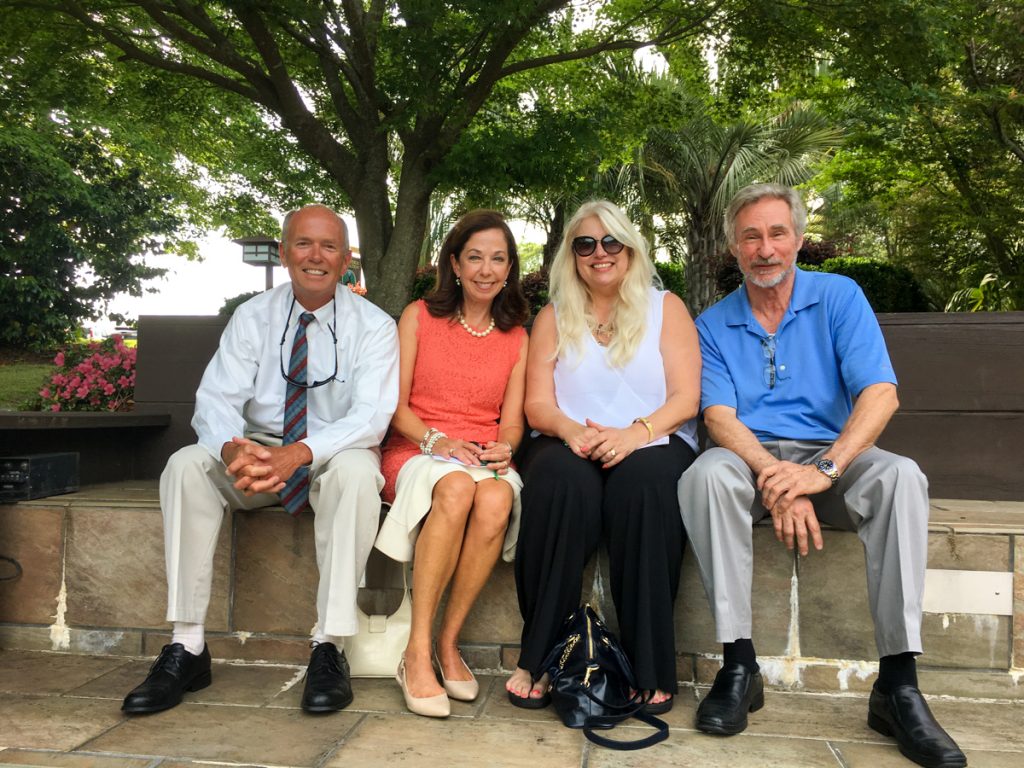 With Tom and Sue at the wedding 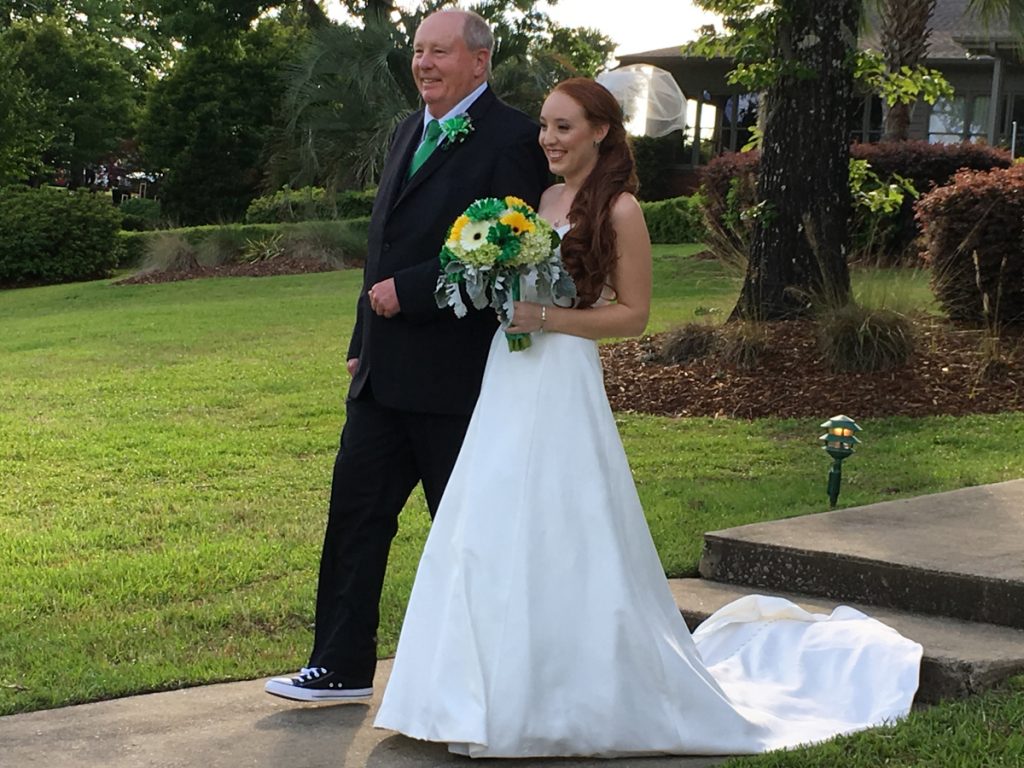 The bride and proud dad 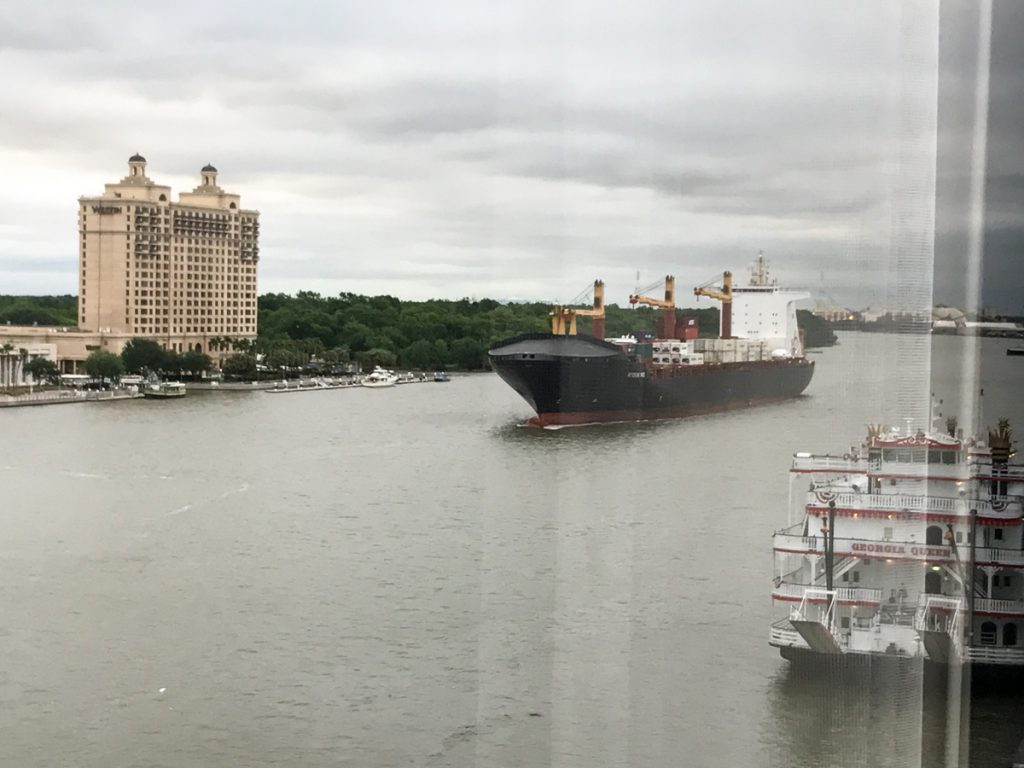 Savannah River from our hotel room 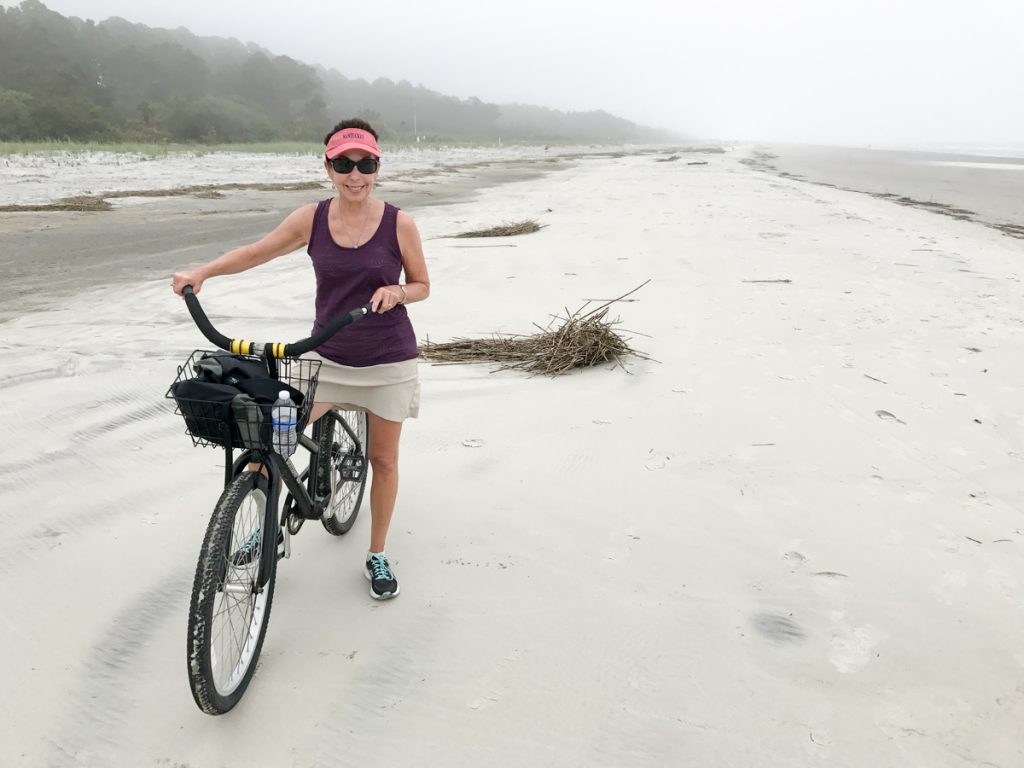 On the beach at Hilton Head 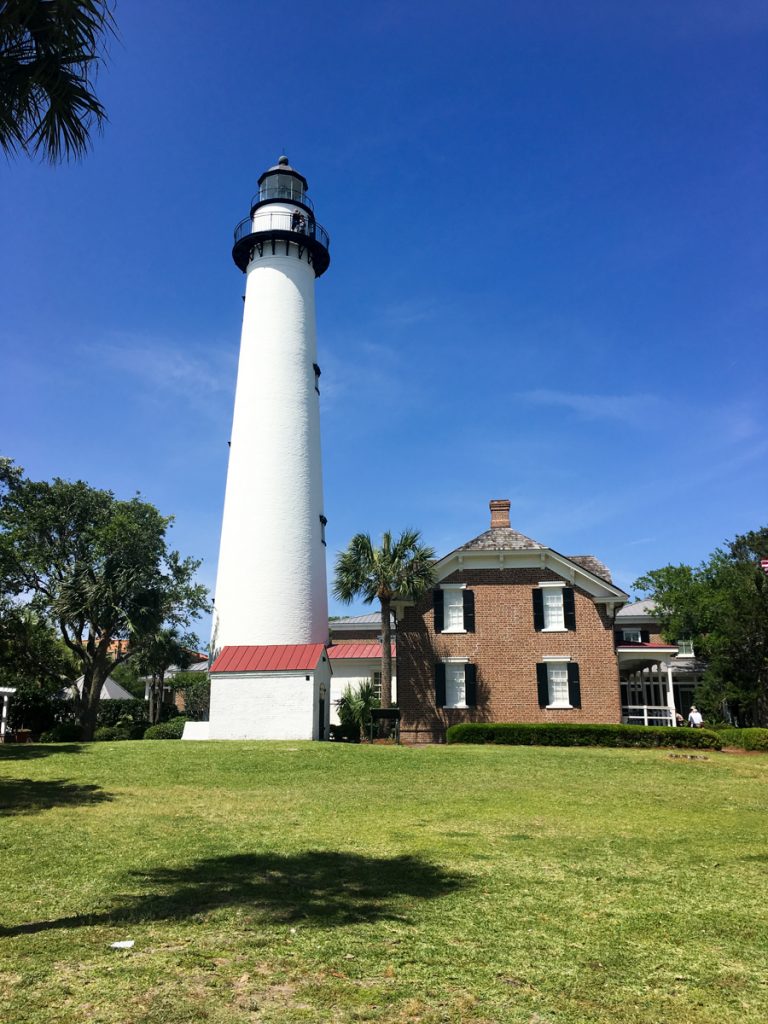 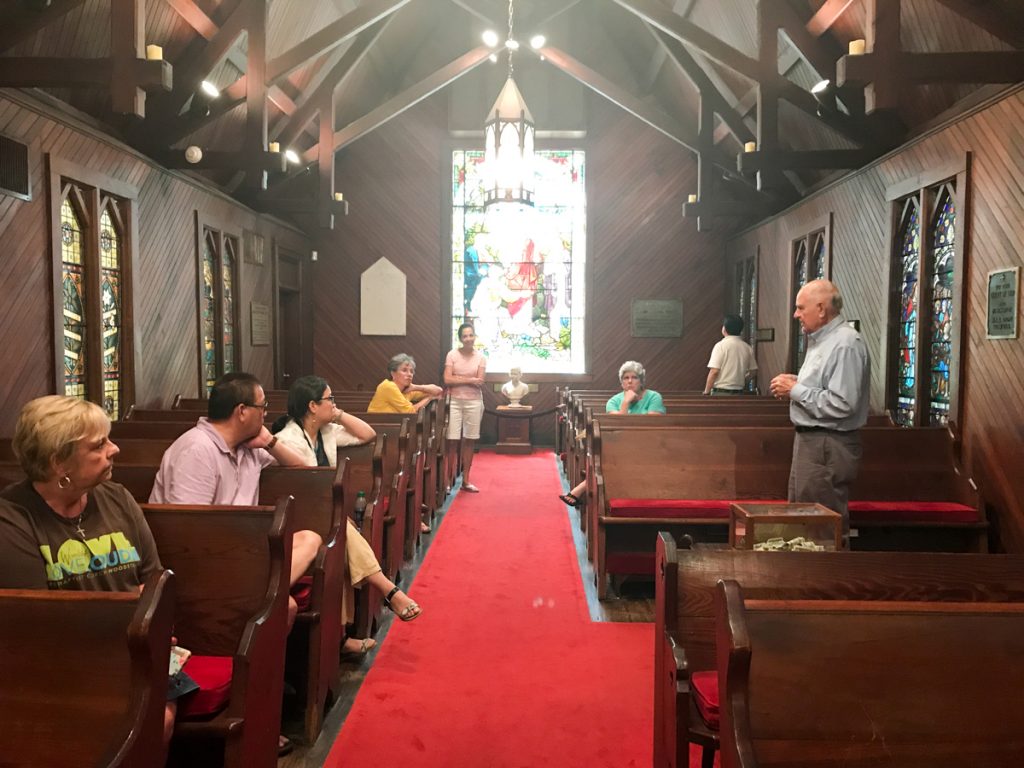 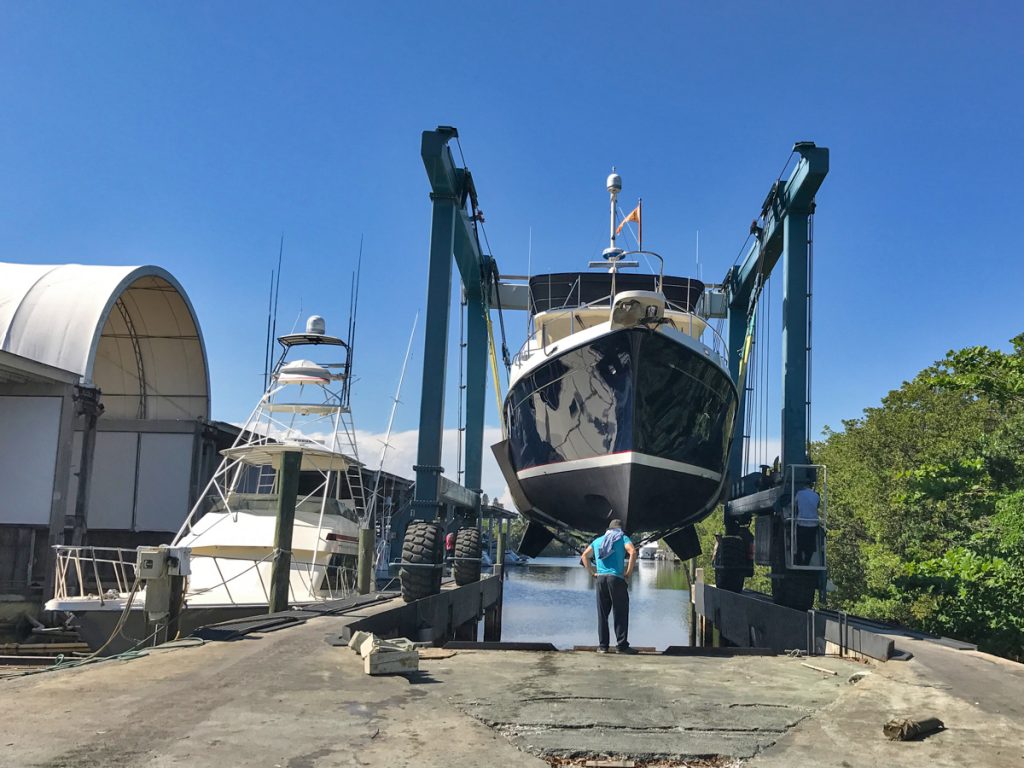 Finally on the lift ready for launch

We were off Big Smile exactly one month. We had a fantastic time visiting South Carolina and Georgia but we really wanted and needed to get underway. It is always said that meeting a schedule should not dictate your cruising decisions. We’ve adhered to this common sense rule religiously but another wedding was “driving this bus” and we needed to push up the coast. Our destination was Point Pleasant, NJ, for a June 3rd wedding on Long Beach Island.

Hoping for good weather, we left Ft. Lauderdale late morning on May 16th. The weather cooperated and 48 hours later we entered the inlet to Calibogue Sound and anchored behind Daufuskie Island, SC.  We would only spend one night to rest up but as we arrived in the AM we had plenty of time to explore. Daufuskie Island is a sparsely populated place where golf carts are an important mode of transportation. It has a fascinating history and now serves mainly as a vacation spot. 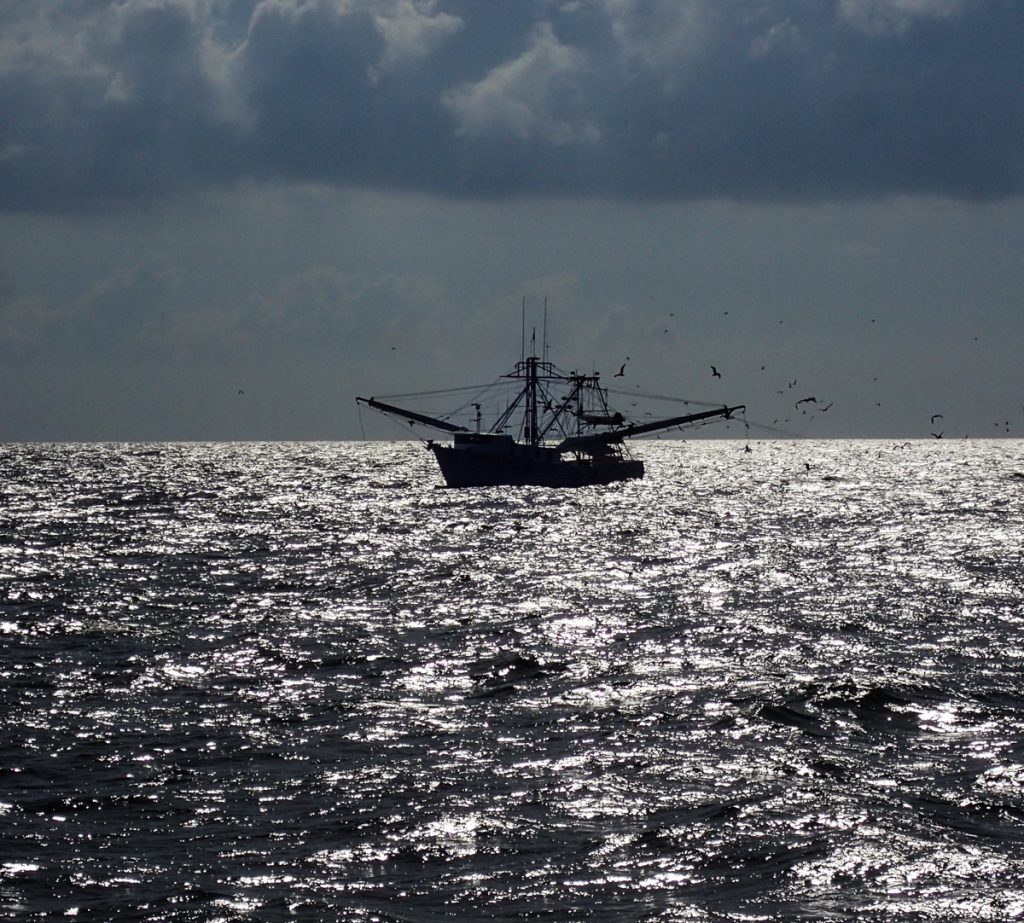 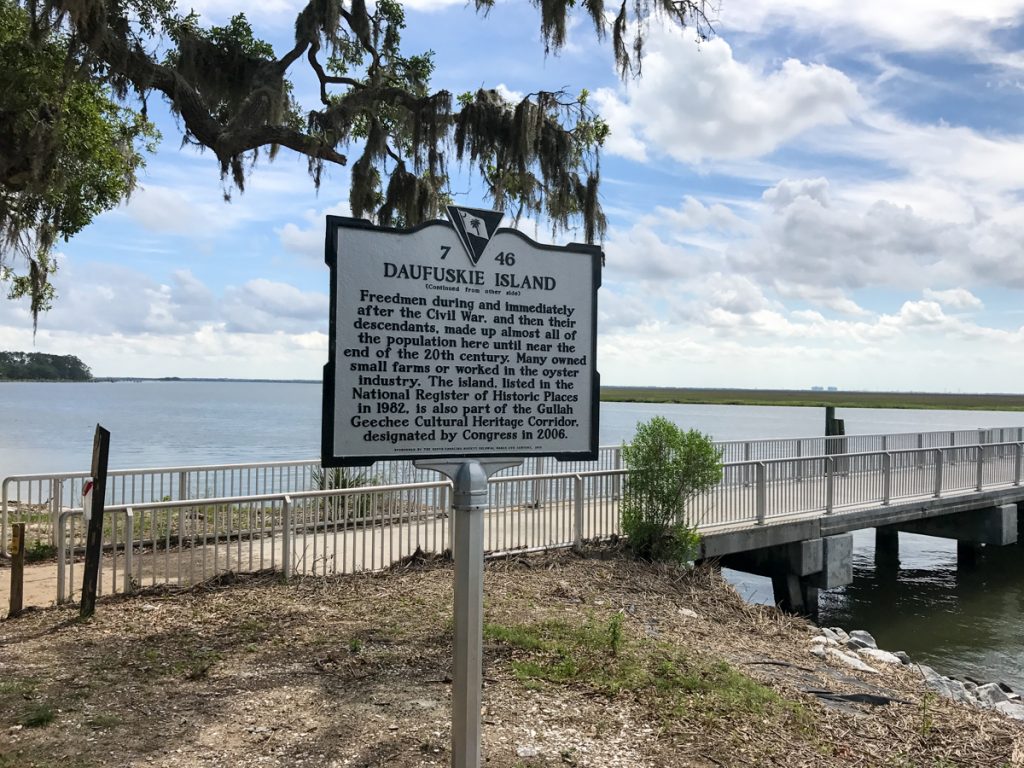 Leaving early the next day we had more great weather for a delightful 34-hour run to a beautiful anchorage behind Cape Lookout, North Carolina. With only one night to enjoy the scenery we vowed we would spend a few days on our way back south.

Cruising up the Atlantic coast

Fishing trawler at anchor behind Cape Lookout with Lighthouse behind

A few miles west of Cape Lookout is Morehead City. This has been our entry point for the ICW the last few years. It provides a relatively easy, inside route to Norfolk and Chesapeake Bay eliminating the outside rout around Hatteras. We know it well and have found numerous anchorages along the way.

After a night anchored on the Pungo River we made a quick stop at Dowry Creek Marina. It was recently sold and the new owner was giving fuel away. Not literally but at $1.90/gallon for “offroad” diesel we had to stop and squeeze in 500 gallons. The best price we have ever seen in five years cruising. We also met the new owner and told him to expect us in the fall. We usually anchor on the Alligator River but we were making good time and decided to push on. As we were crossing Albemarle Sound a fierce storm materialized out of the west and caught us in the middle of the sound. What made it interesting is that we were approaching two replica sailing ships under power. The Nina and Pinta were dead ahead battling the same storm we were.  The winds and waves only lasted a half hour but I was happy to be on Big Smile and not on either of the replicas. 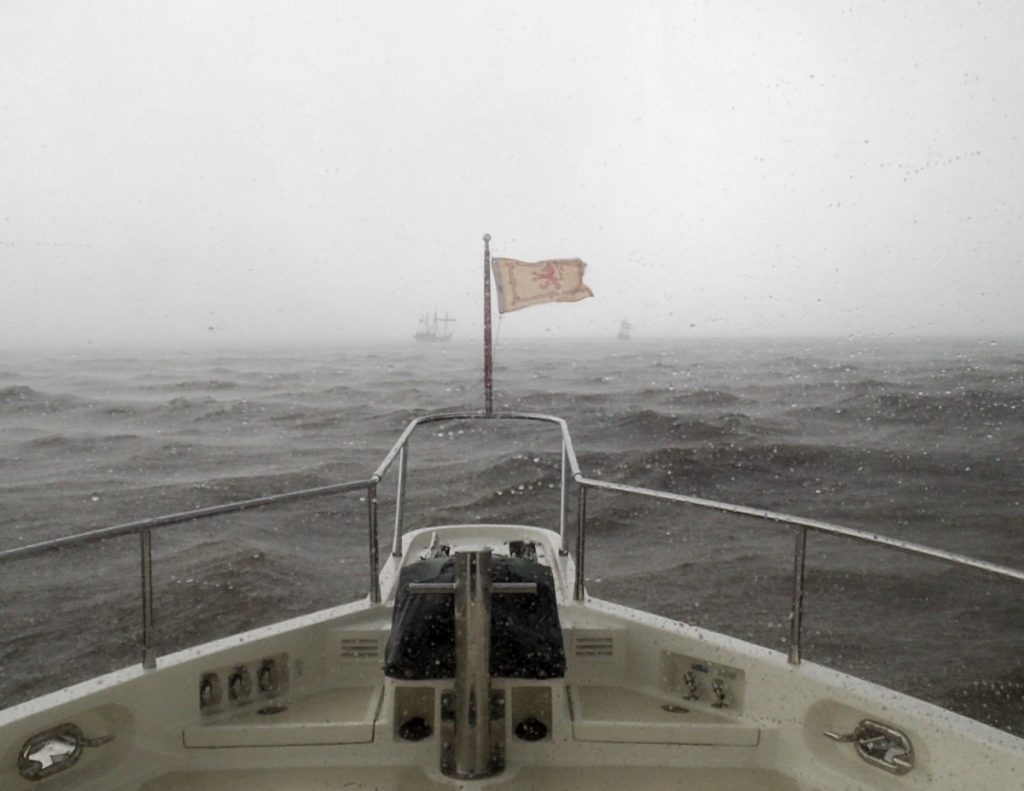 Three days later had us at Port Annapolis Marina for three nights. Tara managed to join us for a night. 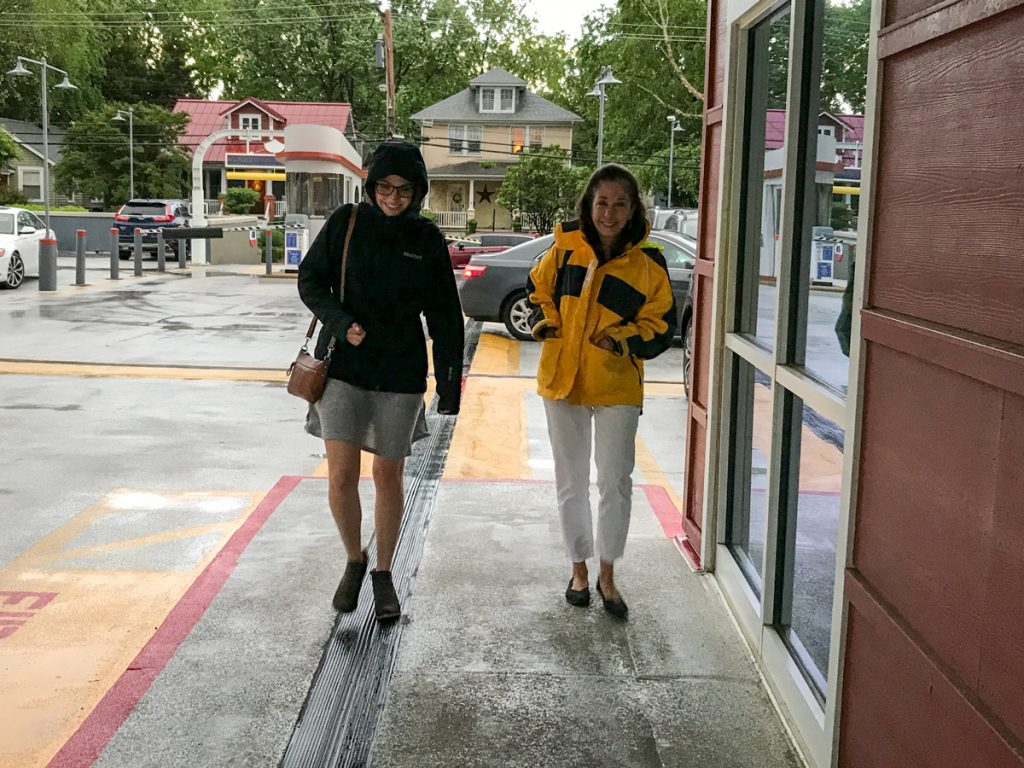 We love Annapolis and our friends Jim and Beth were at a marina further up the creek.

Jim, Beth and Rascal in their folding kayaks

After some fun kayaking and a couple of meals out with our friends it was time to move on up the Chesapeake and down the Delaware. We anchored in one new location and another location we had not been to since buying a 34′ sloop in Rock Hall, MD and sailing her north in 1989. Cape May was a one night stop. It is a fantastic walking town and also has a beautiful beach. 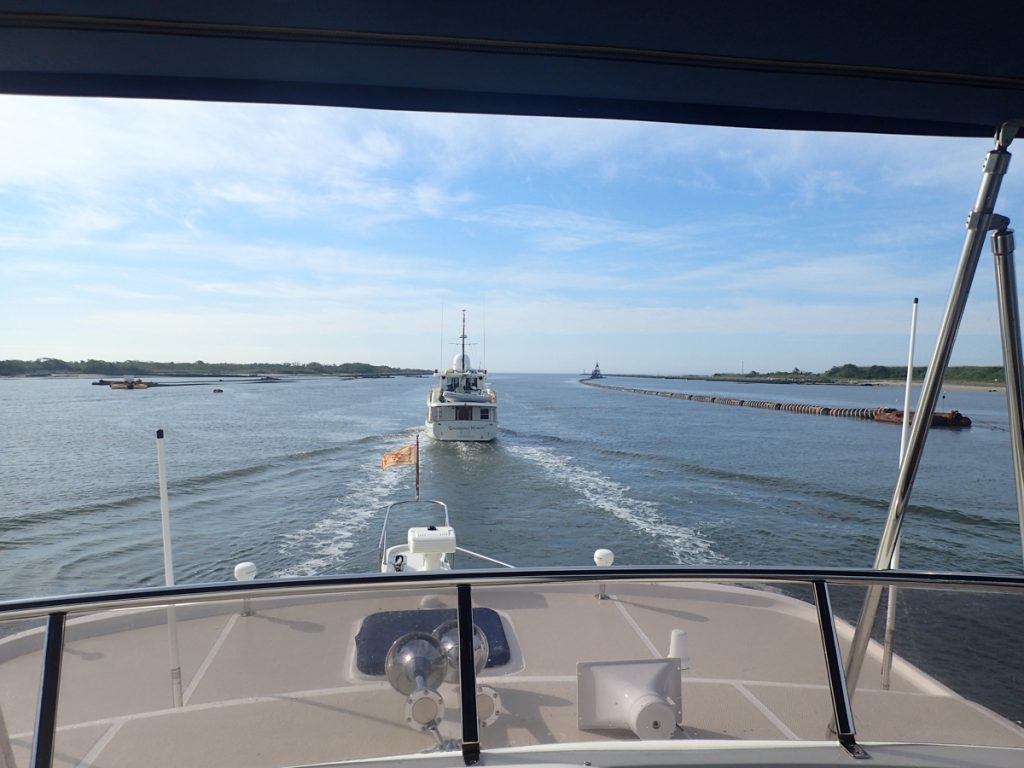 Following a trawler out of Cape May

Atlantic City was another one night stand. We decided to try a small marina across from the large, state-run facility. Kammerman’s Marina was a nice change. More than one night in this town is hard to take and we pulled away from the marina at 3:45AM. 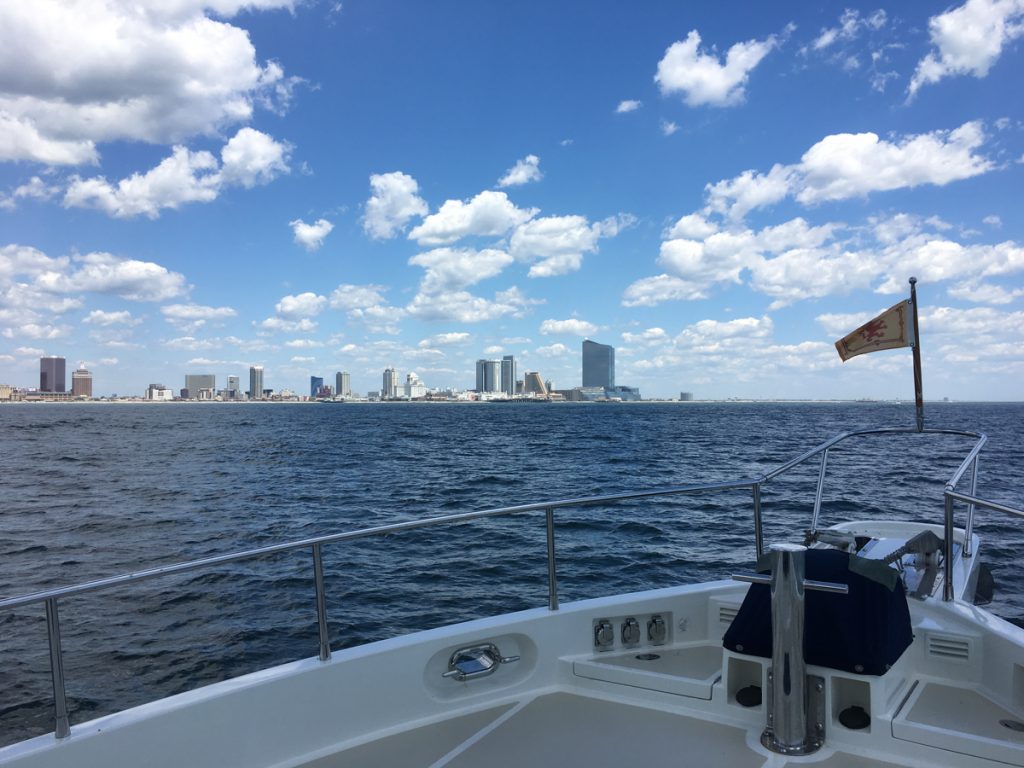 Approximately six hours later, after a gorgeous run up the NJ coast, we made the approach to Manasquan Inlet. This inlet serves as the northern terminus of the Intracoastal Waterway. We had never taken Big Smile or any other boat into this inlet but we knew it well. My father spent many summers in Point Pleasant and my grandmother lived there for years. The beach just to the south holds many memories. That said, it is not an easy inlet for a large, slow boat as there are two bridges to navigate, the currents can be fierce and once inside the inlet it can be very shallow.

The first bridge is the RR bridge. Normally up except when a train comes through, it backs up boat traffic in both directions. It is also very narrow. Just past the RR bridge is the Rt. 35 drawbridge. At a very low tide we might fit under it, but it is not worth the risk and we requested an opening. In typical NJ style, they questioned my air draft as opening the bridge I guess is a nuisance for them.

A couple of miles up the Manasqaun River was Brewers Crystal Point Marina. We had arrived on Friday, June 2nd, one day before the wedding. Despite the delay in Ft. Lauderdale it had all worked out. Nothing is easy though and as we slowly came down the fairway to our slip we ran hard aground in the Manasquan River mud.  We had been told that the approach had 8′ of water at low tide. Not true. It took 20 minutes of engine and thruster work to plow thru and get into the slip.

On Saturday we rented a car and headed down to Long Beach Island to the Mariner Inn Motel. The wedding was scheduled for late afternoon on the beach. Weather was raw and nasty till around noon when somehow John and Marion (father/mother of the bride) made the sun come out and the day and event was spectacular. 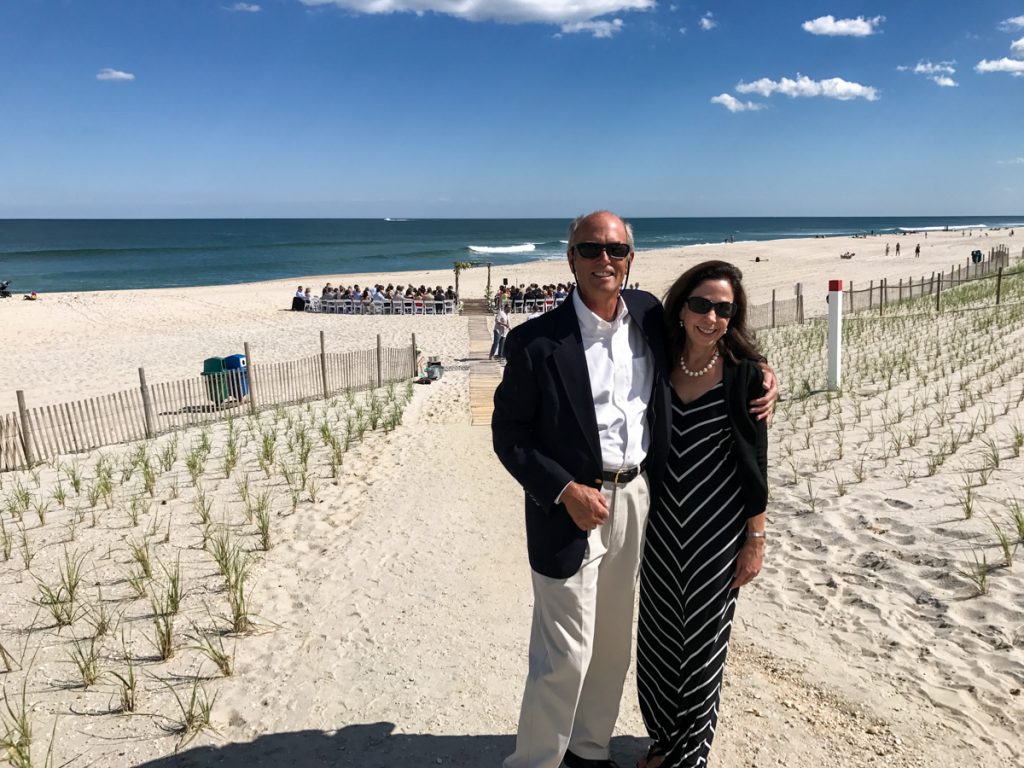 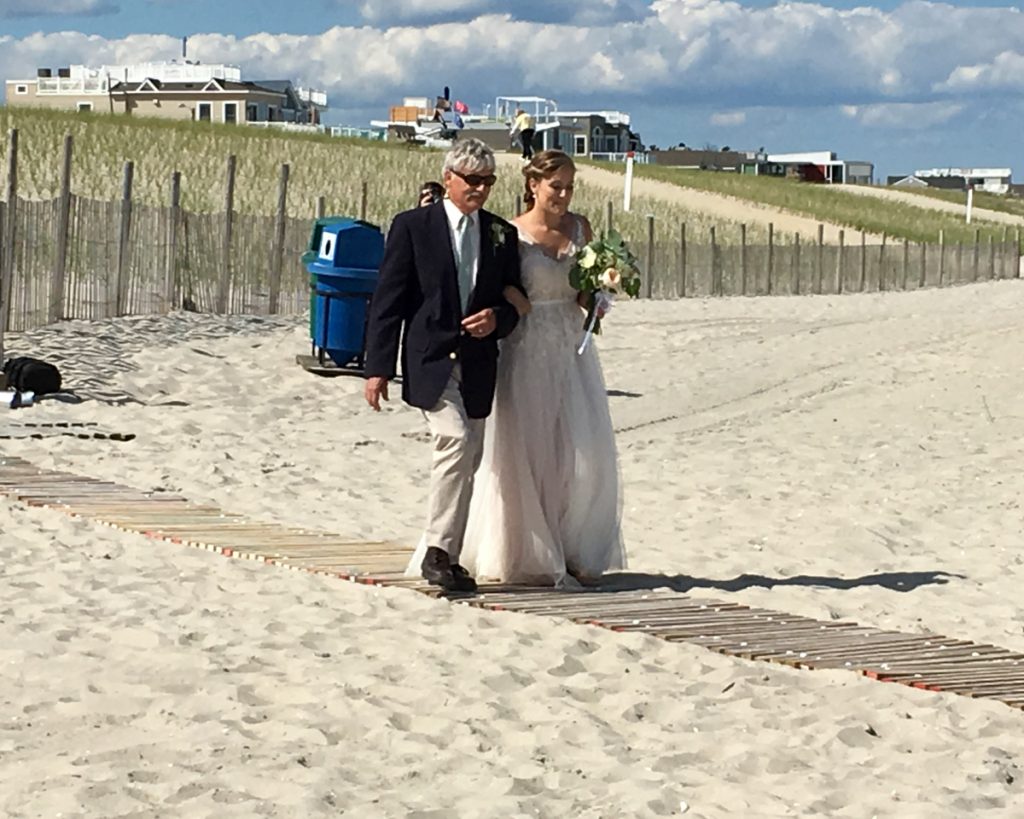 John (the dad) and Laura 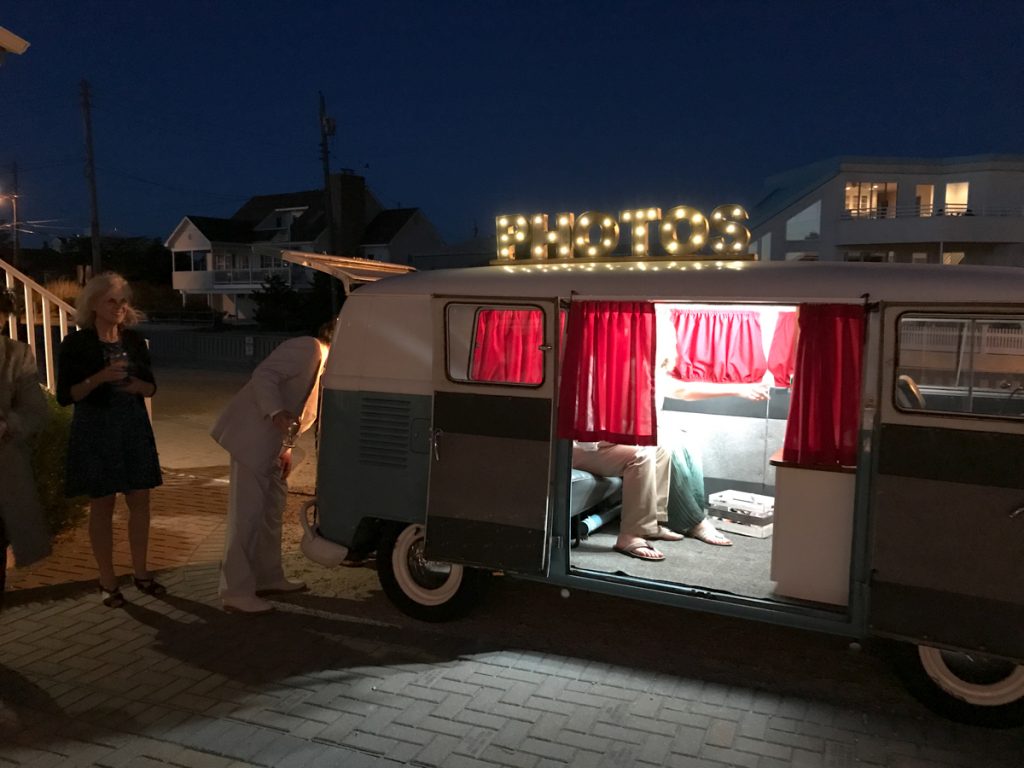 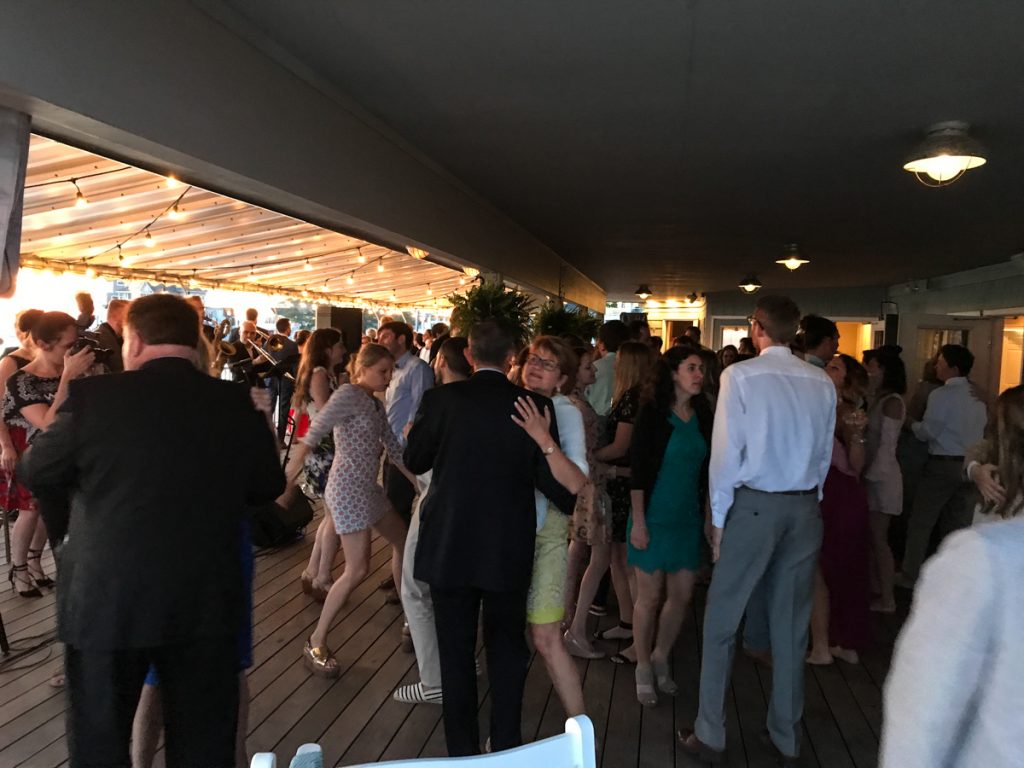 All fun things come to an end and we departed LBI the following morning with a quick stop at the famous Barnegat Lighthouse.

And for me, the equally famous OB diner in Point Pleasant. Famous because it is where my grandmother took you for breakfast or lunch. She loved it.

Time to leave Point Pleasant and get to our summer digs in Greenport, NY. We left the inlet and headed up to NY and the East River. It was an easy transit and we spent a night anchored in Oyster Bay. From there we caught an outgoing tide in Long Island Sound and made it to Orient Harbor before sunset. 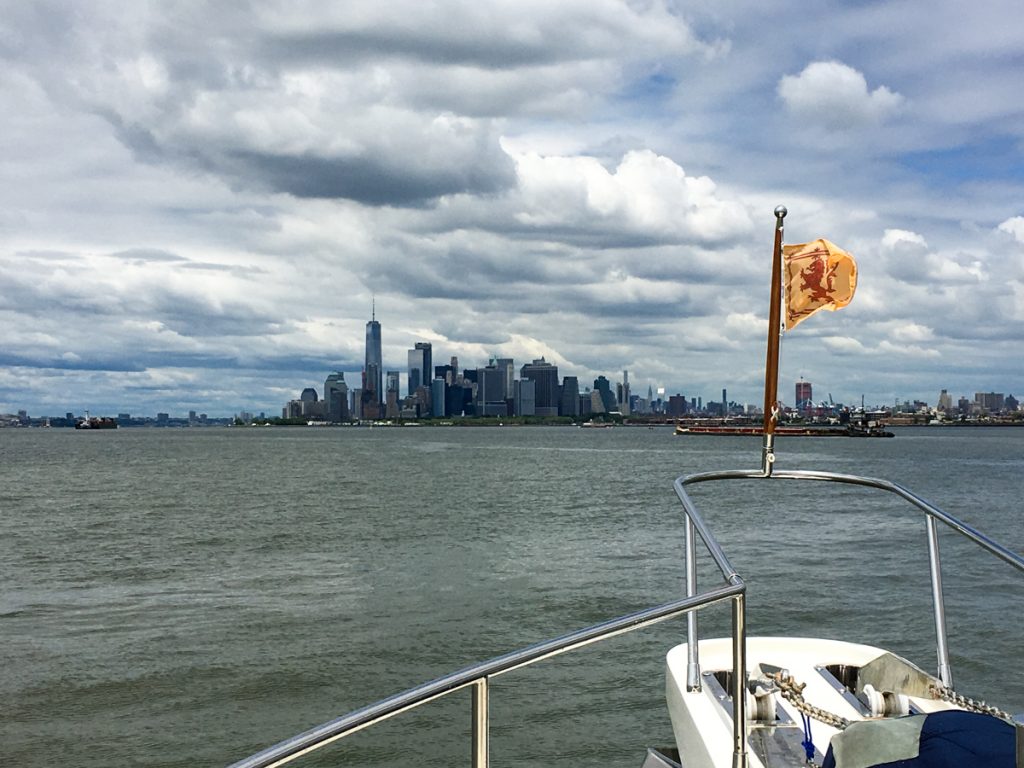 On June 9th we pulled into our slip at Brewers Stirling Harbor Marina, twenty-five days after leaving Ft. Lauderdale. 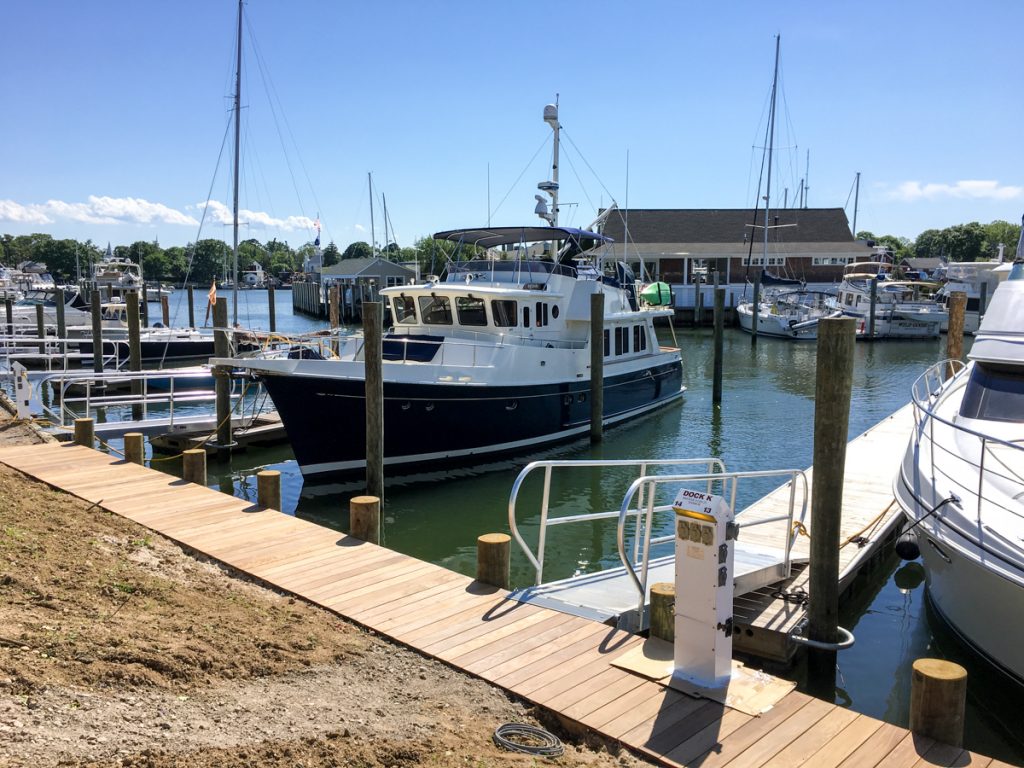