What a winter it has been. When we hopped off Big Smile in October we knew that snow was in our future at least for the next few months. What we did not know was that we were in for the wildest winter we have experienced since owning in VT. Temps varied incredibly. Snow came and went. Winds walloped the mountains. Temps in the 60s and 24 hours of rain caused wide spread flooding. Then March arrived. And it snowed and snowed and snowed. Three nor’easter’s and several small snowstorms dropped over five feet of snow. My mountain, Stratton, was wondering in February how long they could remain open. That question became mute.

Before the wild winter began, we spent Thanksgiving at my cousin’s house in Redding, CT. Always a great time with plenty of food and booze. And in the new business department, cousin Nance and husband Rob opened a brewery in Ridgefield, CT. Nod Hill Brewery got off to a fast start in October and is brewing some awesome beer. 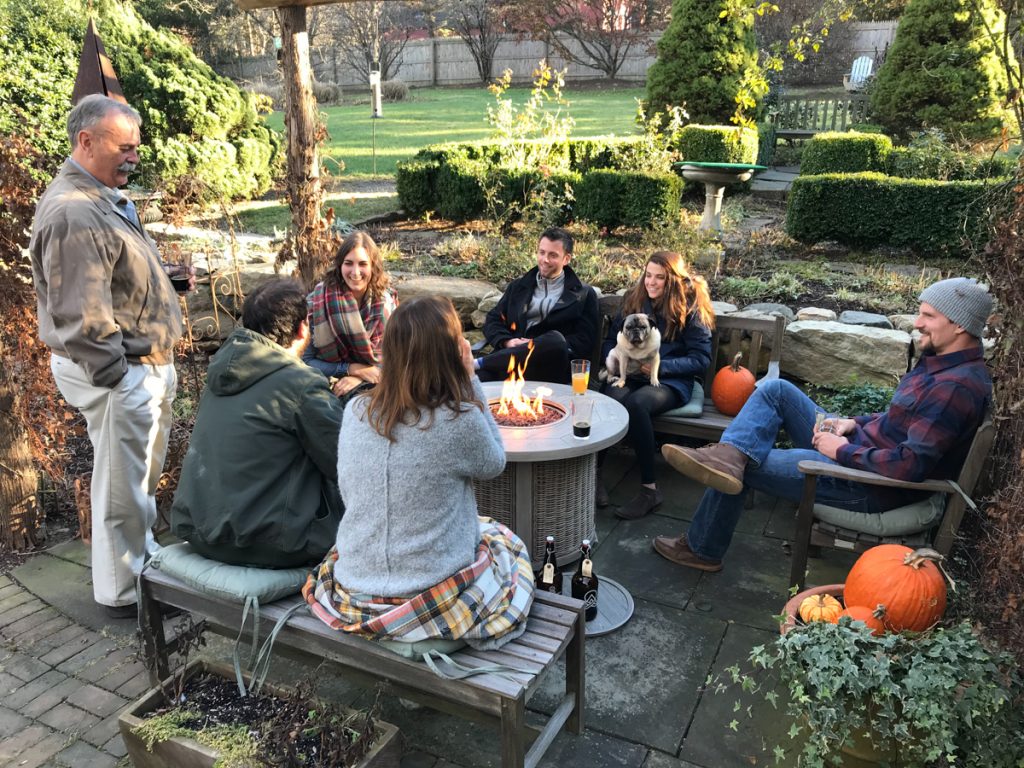 The cousins chat it up before dinner

In the fall we purchased the MaxPass. This ski pass gave us access to numerous resorts around the country and Canada. We had planned a ski trip to Big Sky, Montana, in mid-December. Unfortunately, I took a big spill while skiing four days before our departure, knocking myself out and suffering a separated shoulder and other bruises. A mild concussion kept me dizzy for several weeks. Yes, it was the concussion. So I missed some work days at Stratton and did no skiing in December.

Christmas arrived and we headed down to PA for a couple of days of fun at Cath’s brother Kevin’s house. 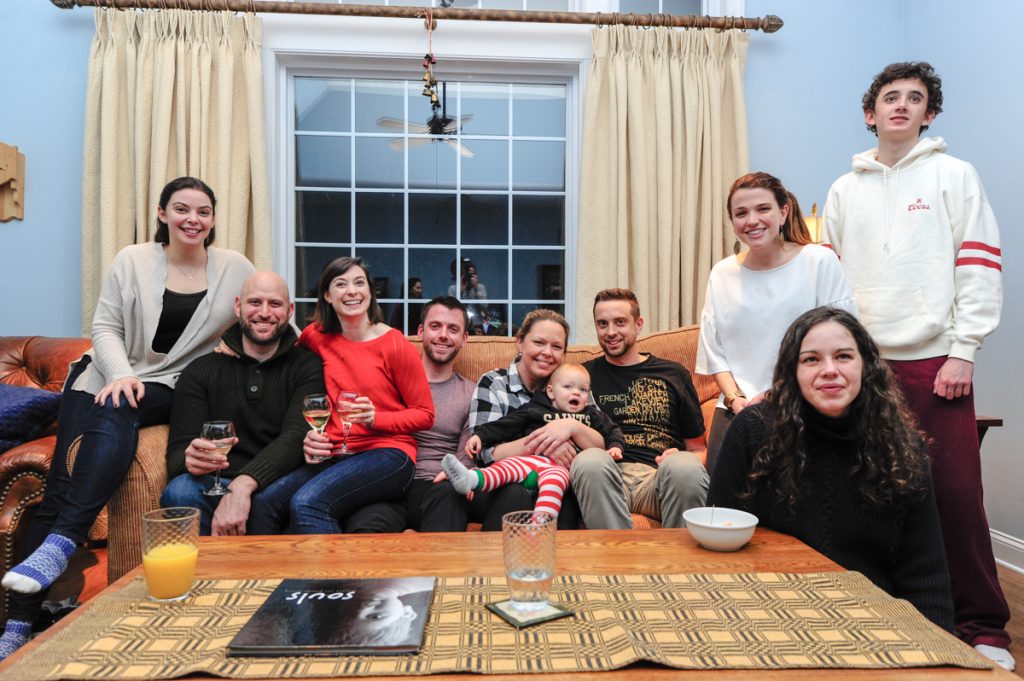 The cousins, plus three others 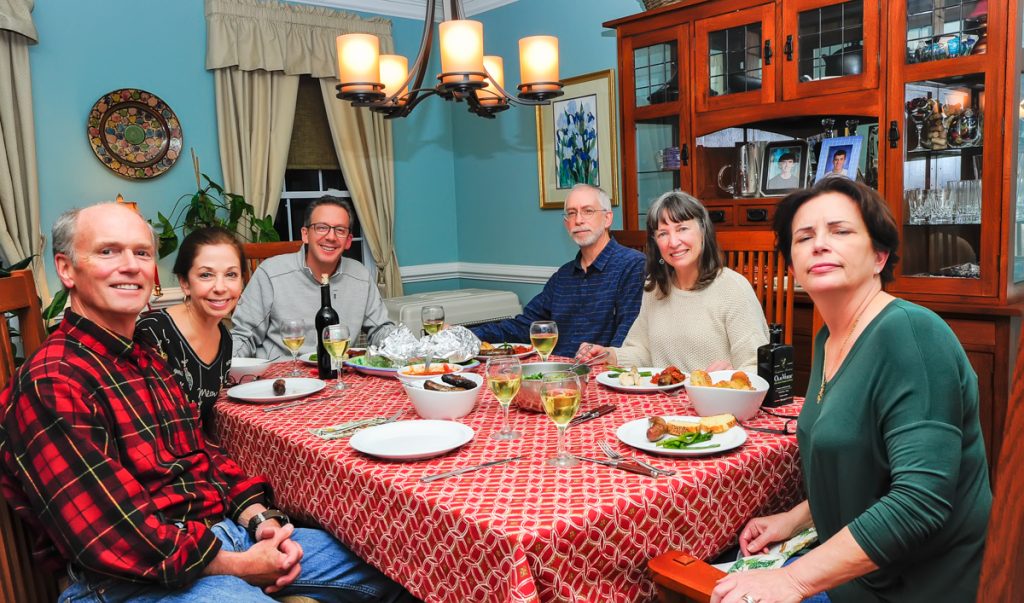 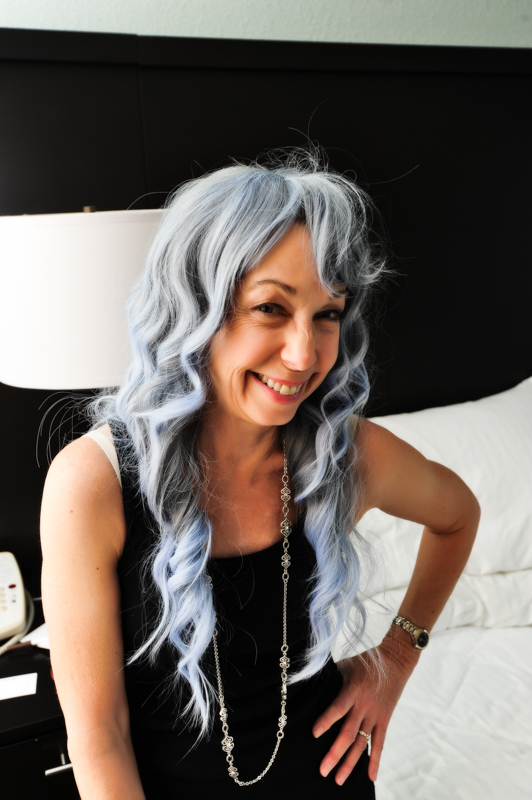 Blue wig — a gift from Tara

This was to be the season of crazy weather. Despite the ups and downs we did get snow and cold and did have numerous guests up to enjoy the season. We also went to the Manchester Christmas parade for the first time. 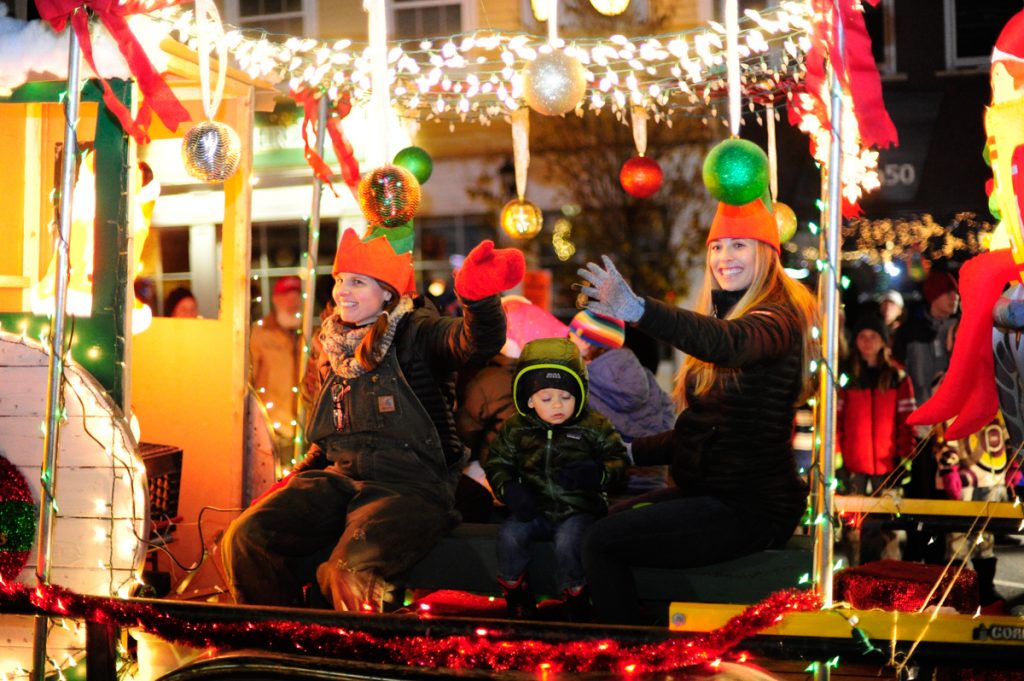 Deb came up from NJ for a few days of skiing in both January and February. Conditions were good. I managed to take a couple of runs with them while working. 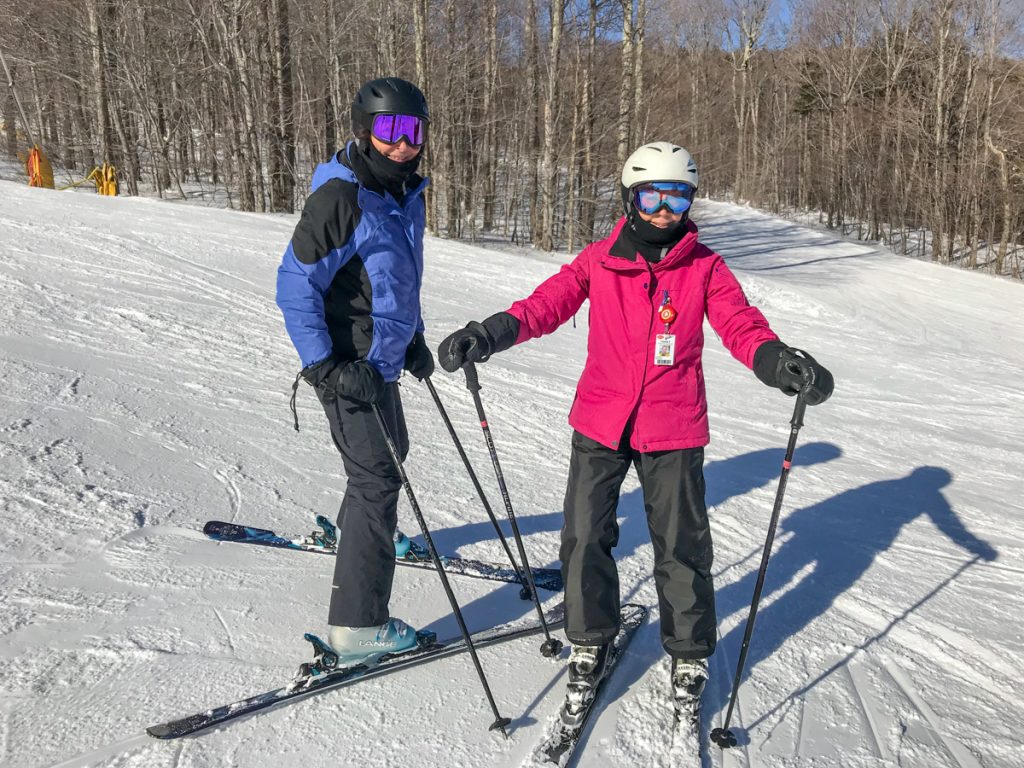 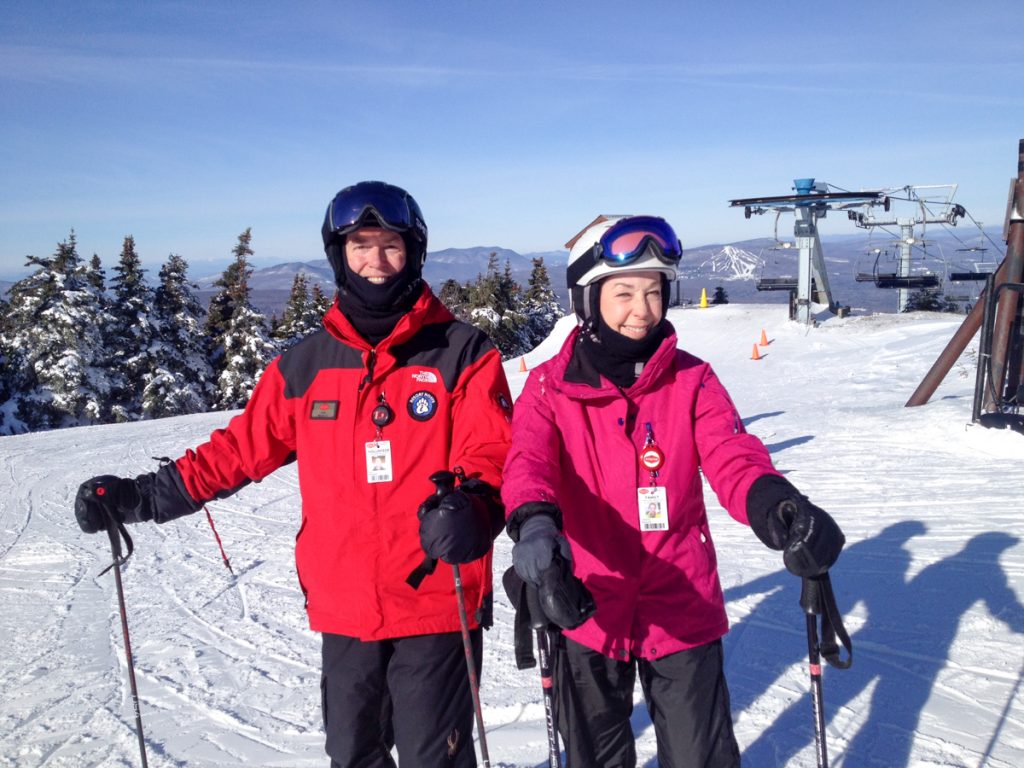 My buddy’s band played at Grizzly’s at a private party for Stratton employees and volunteers. 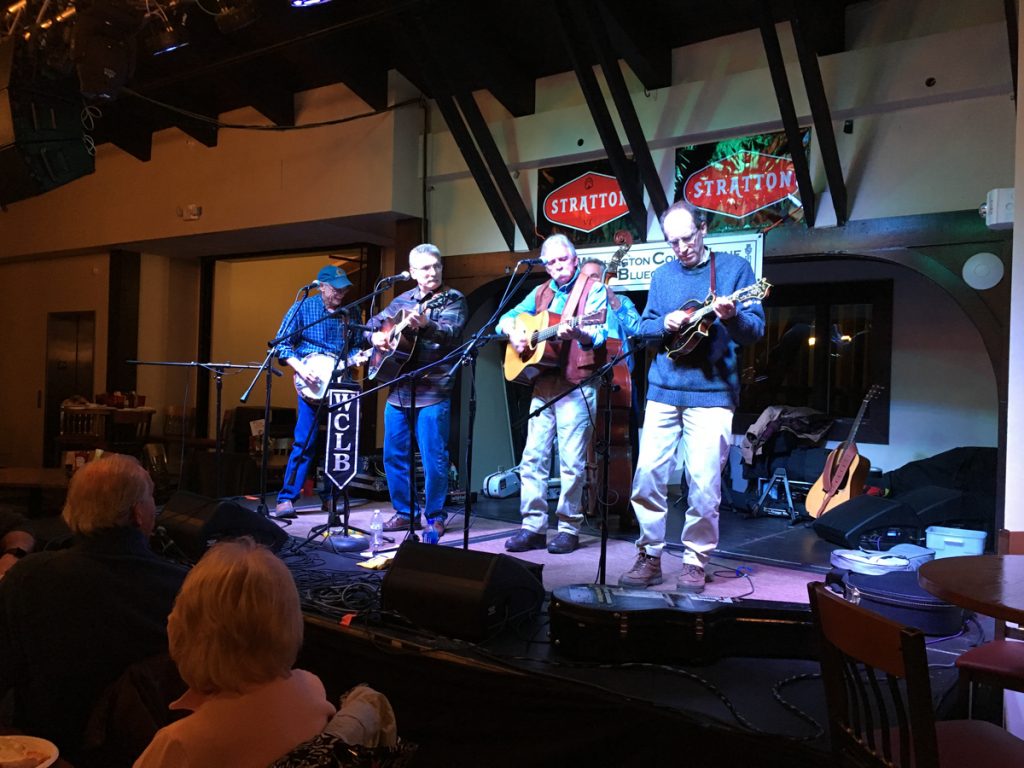 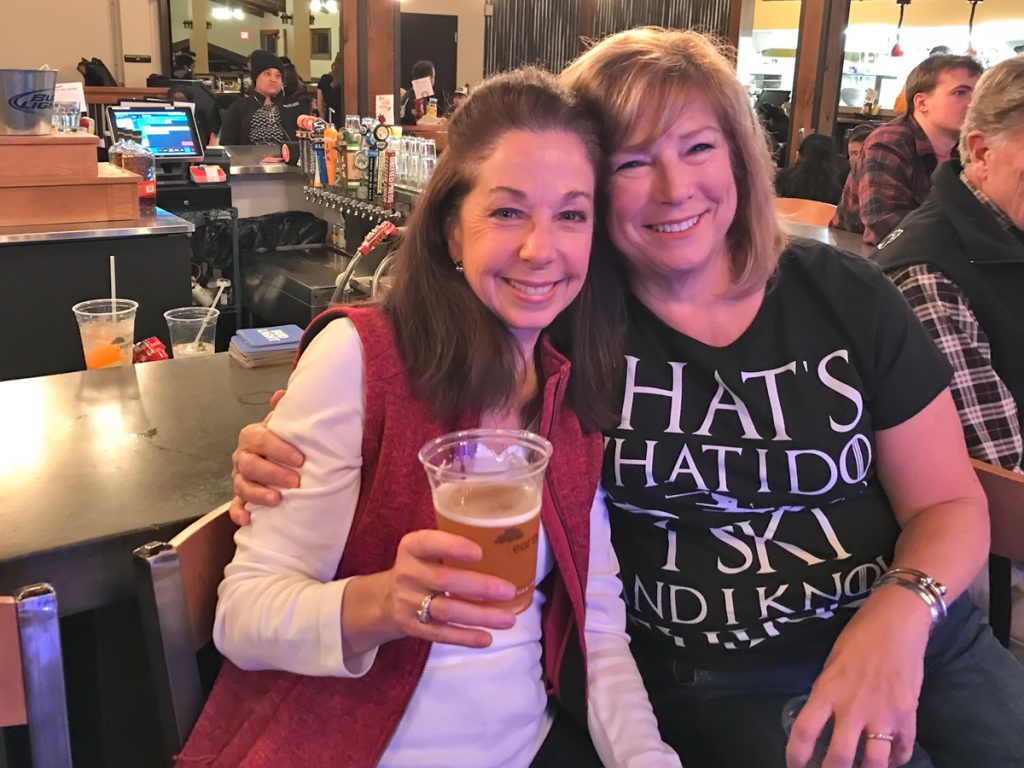 Andrew came up to sled for a weekend. Turned out to be perfect conditions. And our friend Mike drove up from CT for one day of skiing. 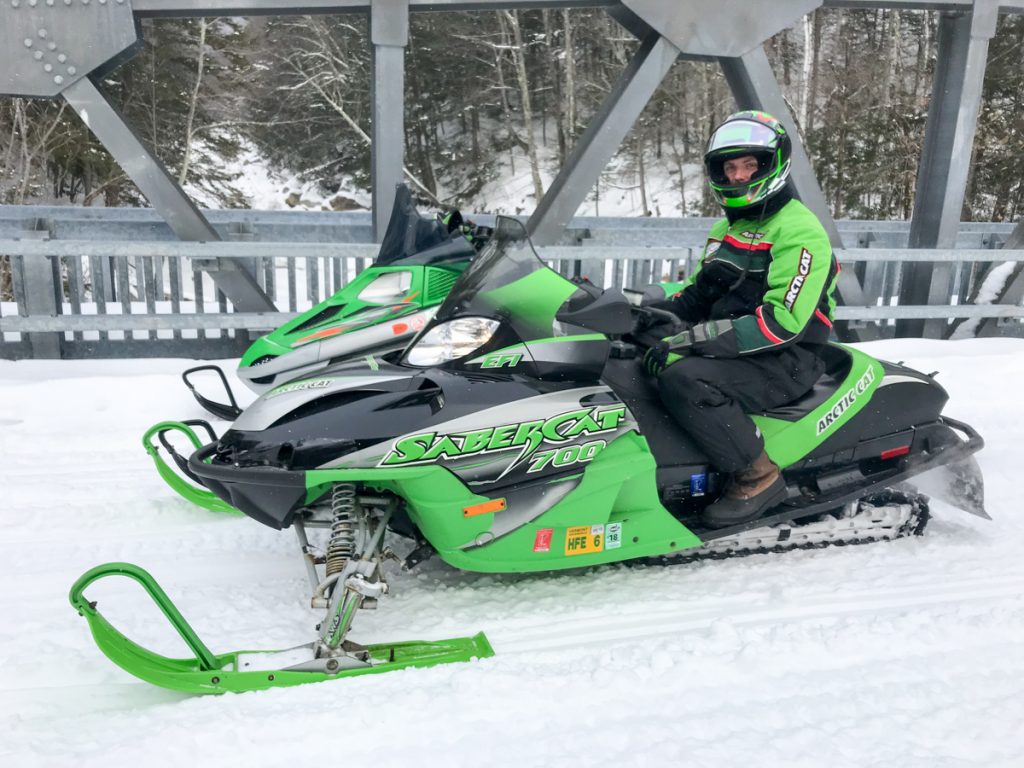 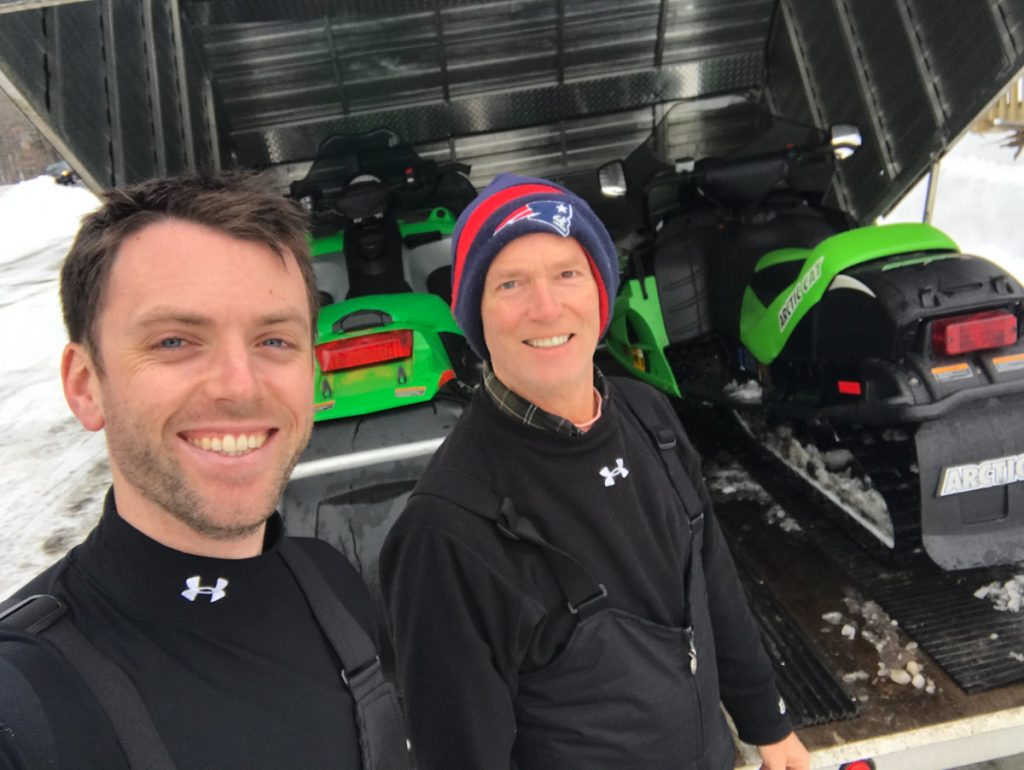 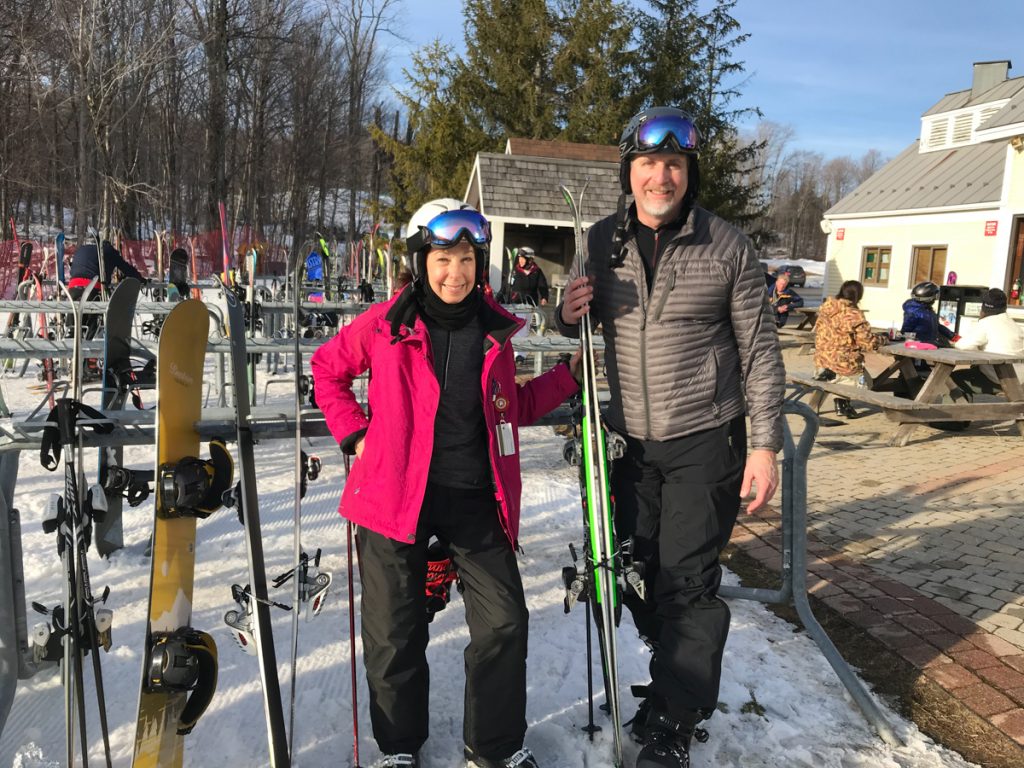 Even the Patriot cheerleaders came to Stratton. 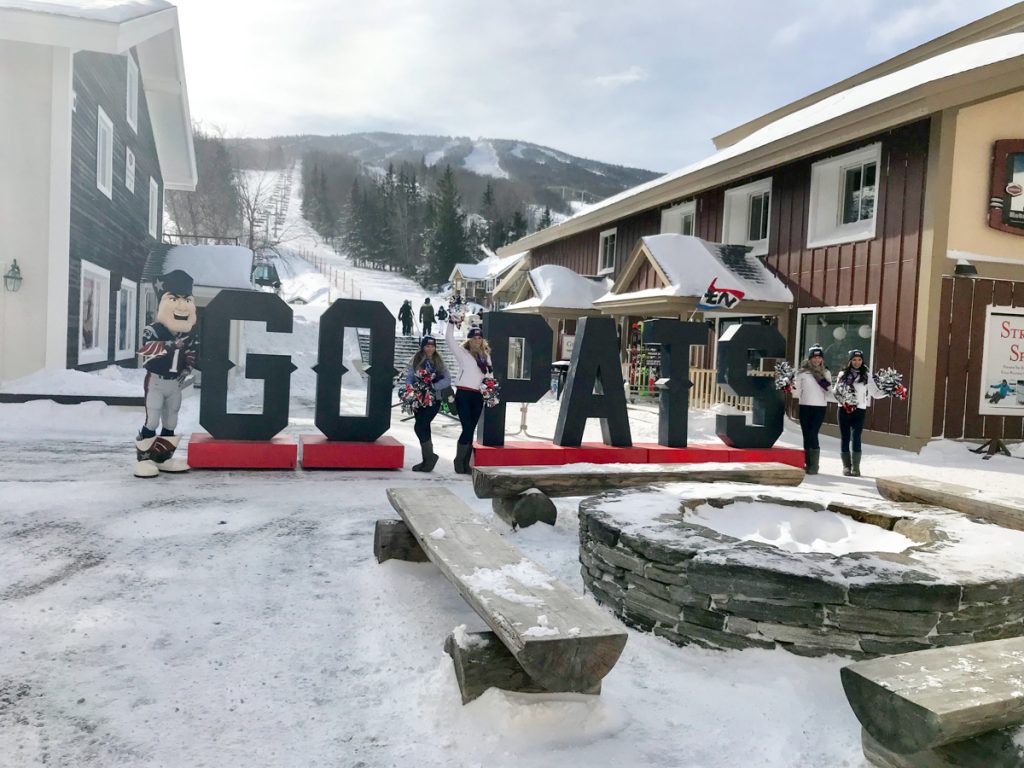 Carol and Dennis from NC and Joan from PA came for a long weekend.

Joan, Cath, and Carol out for lunch at the JJ Hapgood General Store, Peru VT 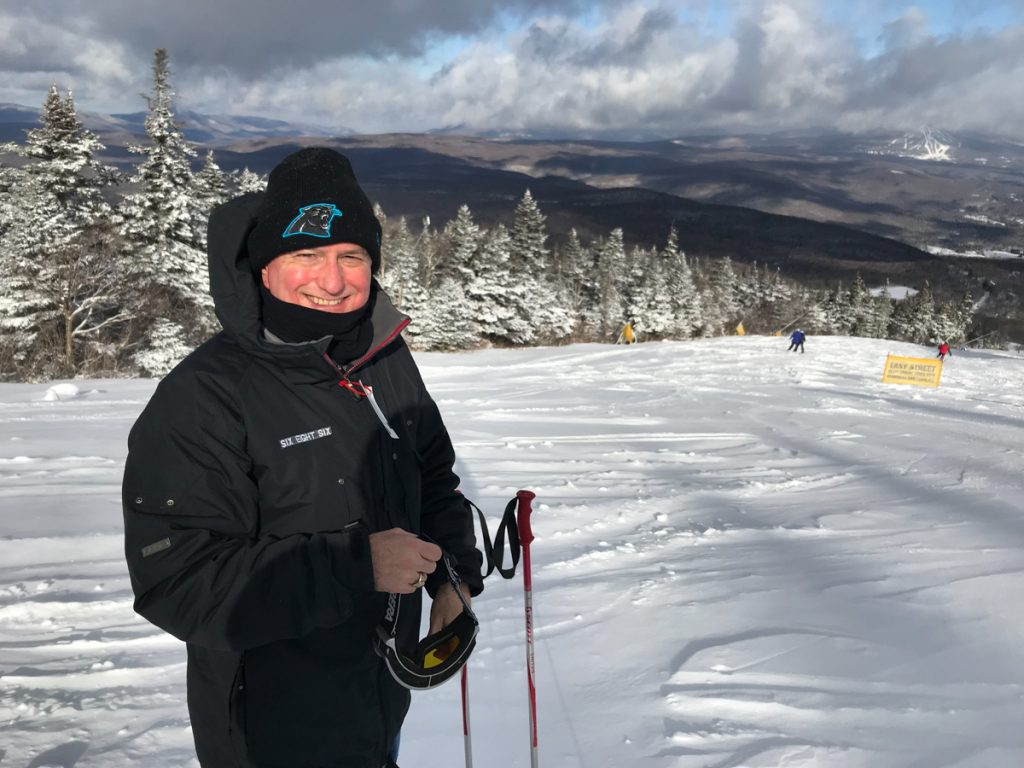 Dennis skiing with me at Stratton

Nance and Rob came up for a quick trip. We went to a show in Rutland with our good friends John and Marion. And of course we took them to the Vermont Country Store. 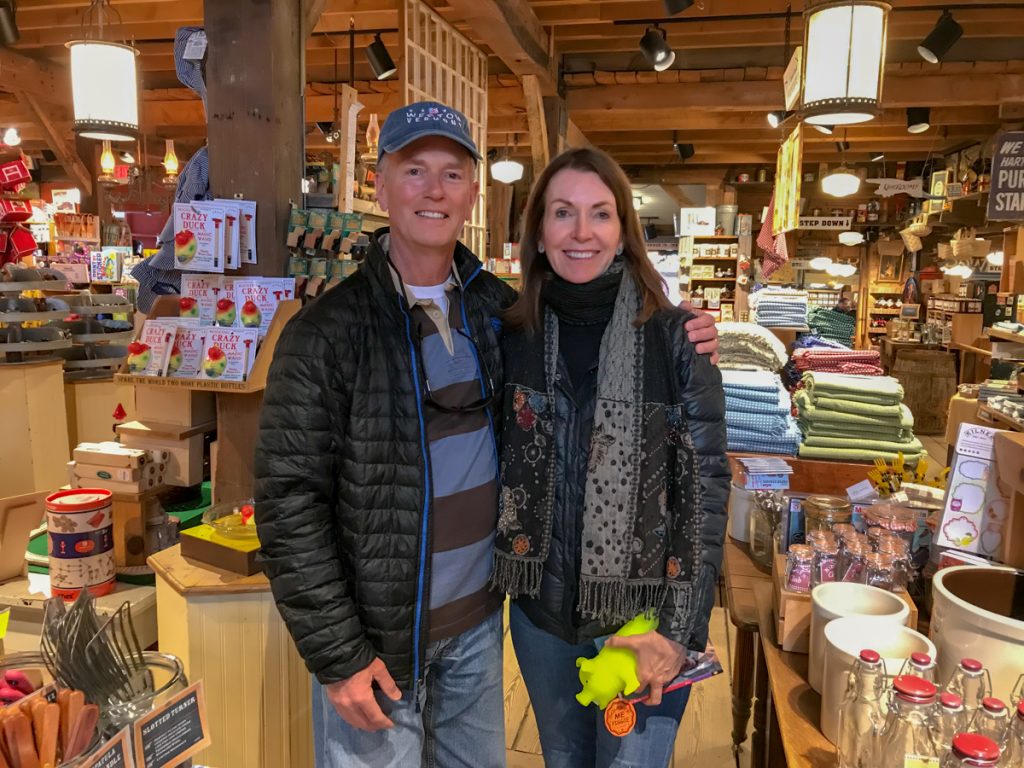 In February the weather got funky. Warm and warmer it became. I worked one day when it hit 62 on the mountain. Not good for the snow. 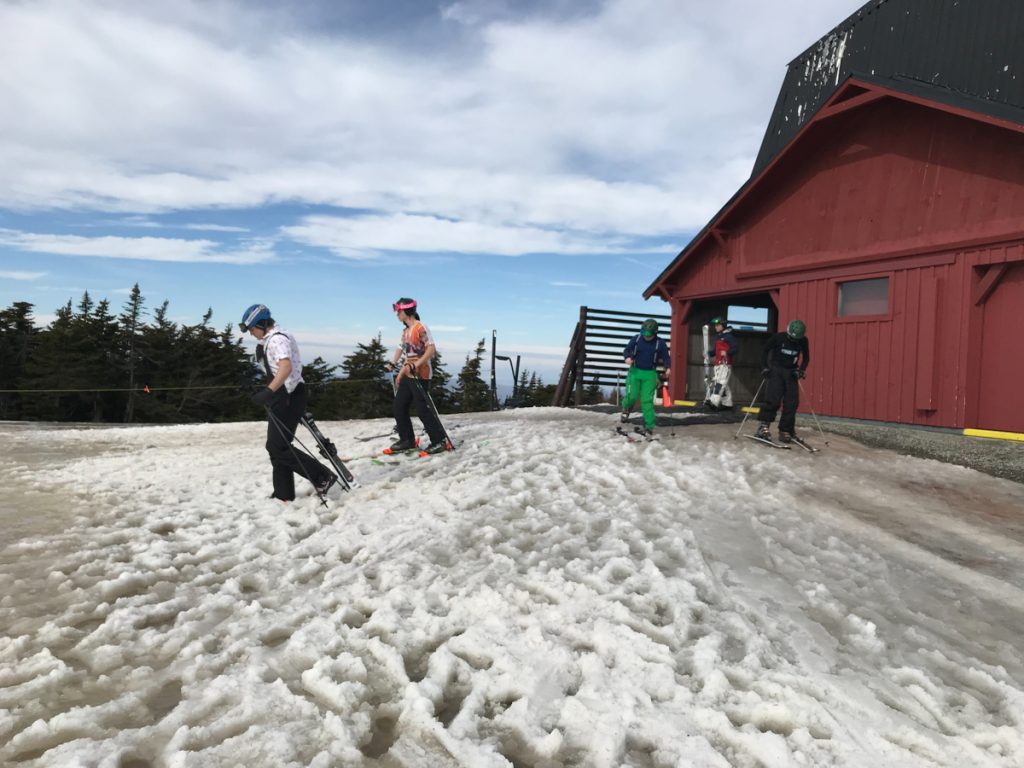 With the weather not cooperating and MaxPass in hand, we decided to drive to Mont Tremblant, Quebec, for five days. We picked a good week and loved it. The village is nice with very good restaurants and shops. Our suite was 100 yards from the chairlift and the snow and grooming were good. 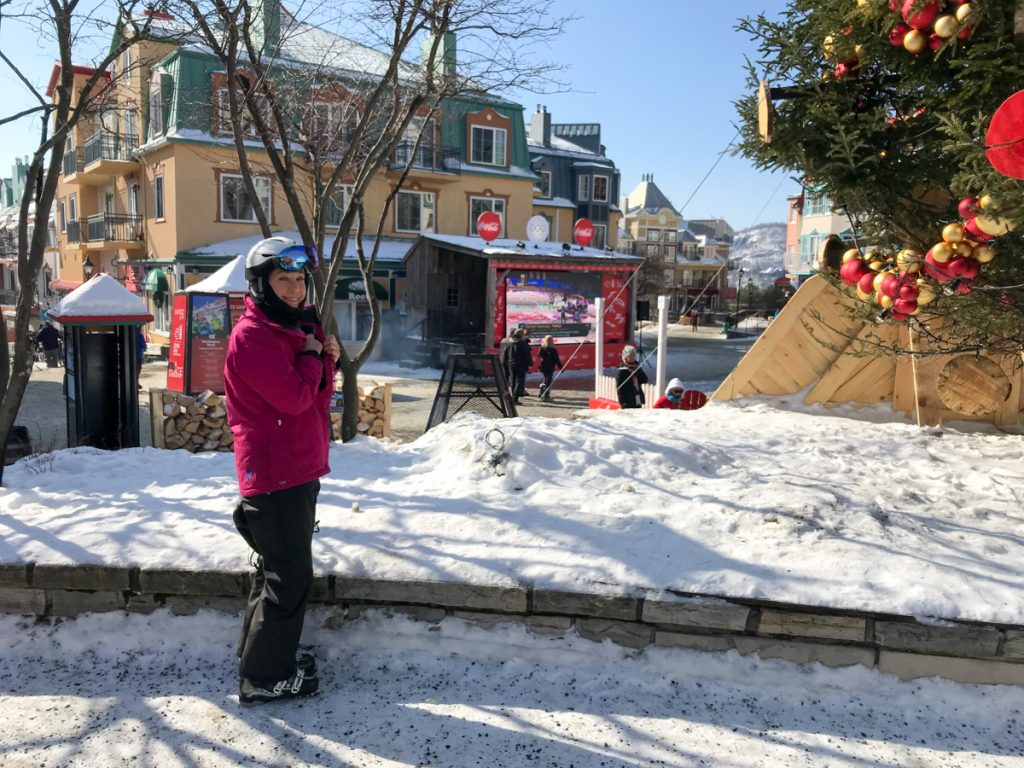 The base village with Olympics on big screen

With the wild February weather affecting ski conditions in the east we opted, at the last minute, to fly to Colorado and spend several days skiing at Winter Park in Colorado. It was a great decision. The mountain and conditions were superb. 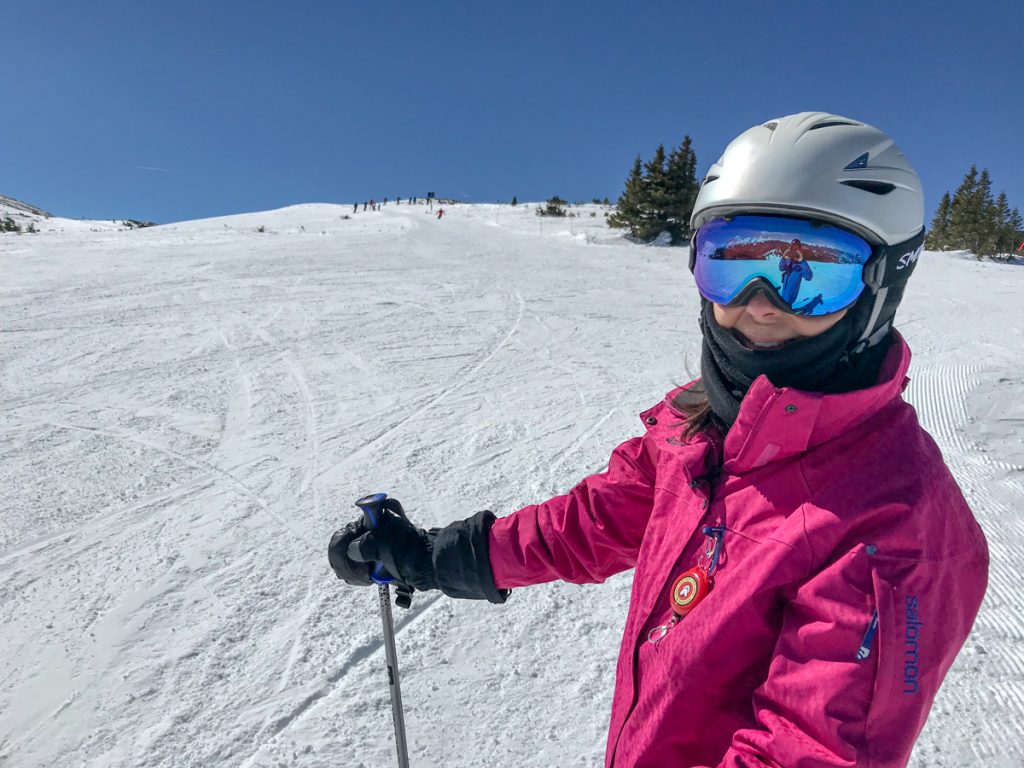 Then March arrived. Three nor’easter’s and some smaller snowstorms deposited approximately five feet of snow. Stratton Mountain was thrilled and the conditions were amazing. However, who expects five feet in a month? Cath had made plans to take Tara to Costa Rica the third week of March and I made plans to ski Mt. Bachelor with my buddy Pete.

Mt. Bachelor, located 20 minutes from Bend, Oregon, was as good as Winter Park. The first two days had bluebird skies and the next two days it snowed lightly. 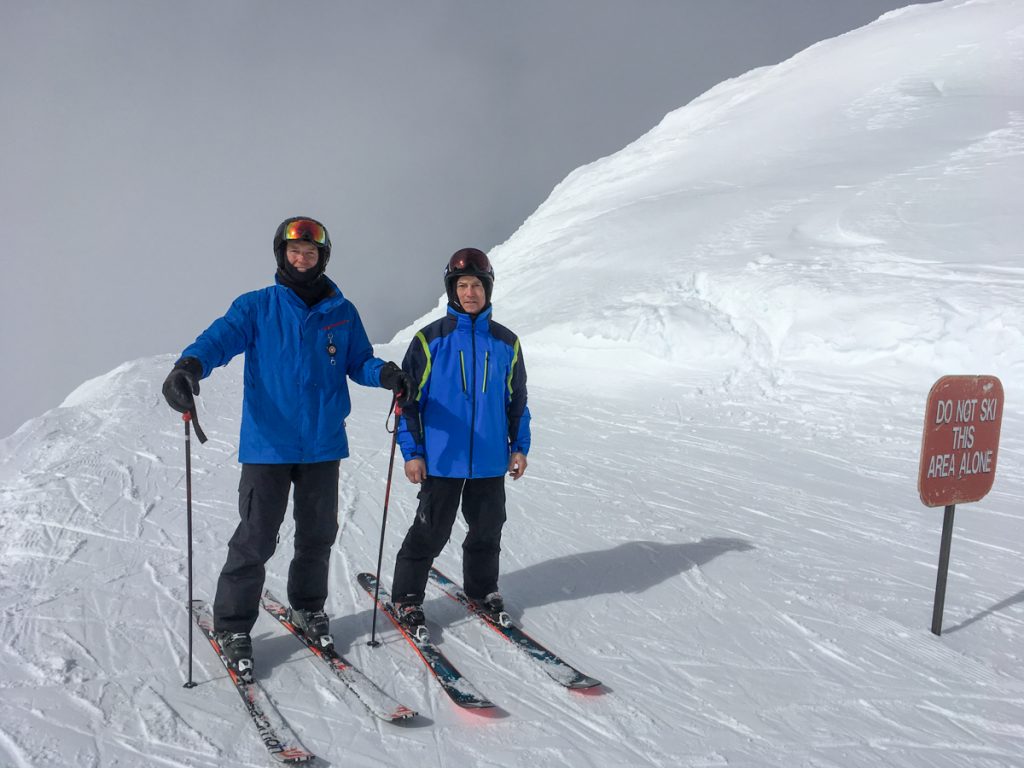 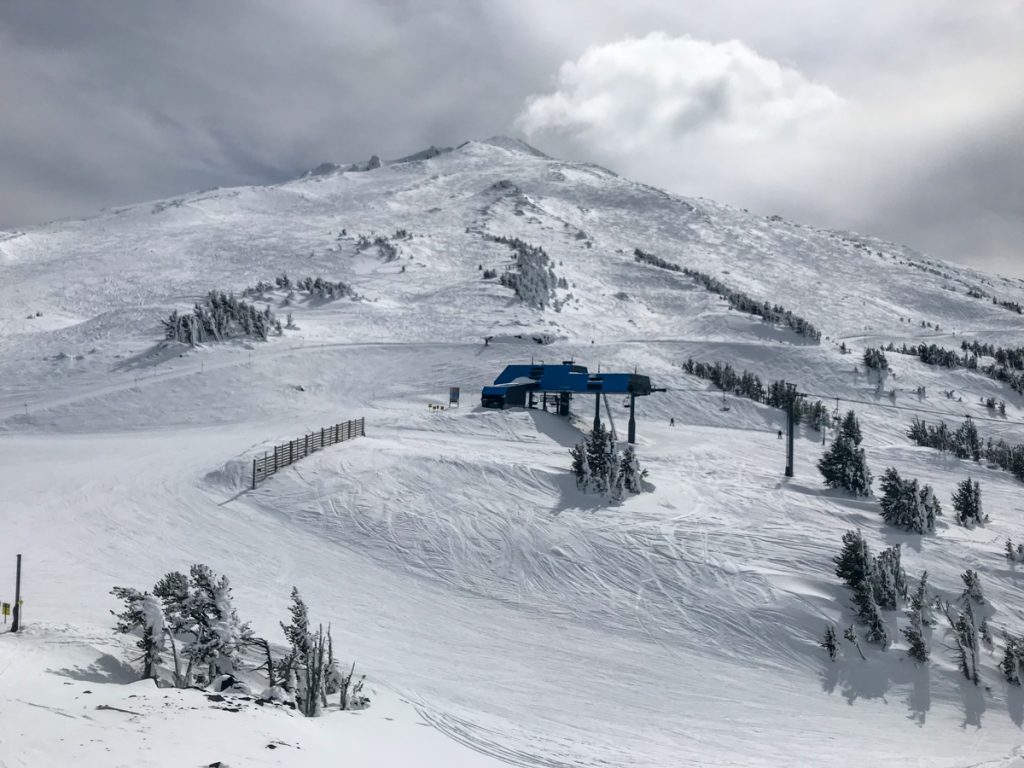 Looking at the “Outback Express Chair”

Halfway between Bend, Oregon (where we stayed) and Mt. Bachelor, the snow quickly disappeared. At a scenic overlook we discovered we had entered an old volcanic battleground. For half a million years the Cascade Volcanoes and Newberry Volcano spewed lava, thus changing the flow and direction of the Deschutes River many times. The picture below shows the Newberry Volcano and the black ancient lava flow behind me. 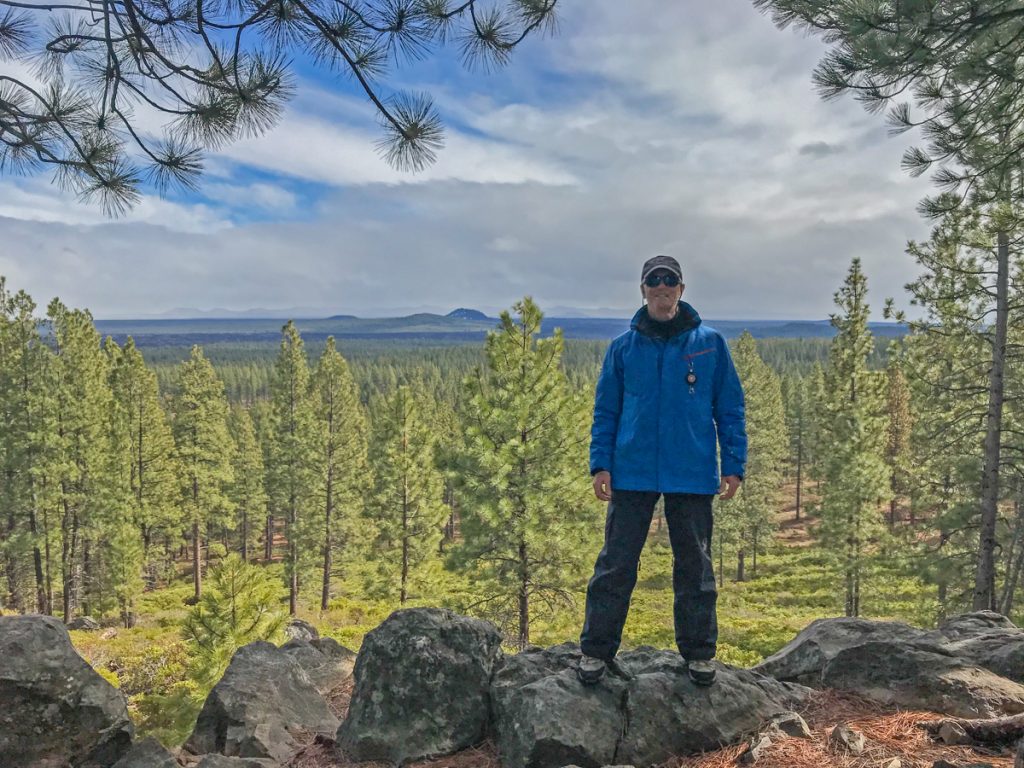 Newberry Volcano in the background

A great four days of skiing ended and I boarded my flight back to Boston. I had decided to detour thru Portland, Maine, to stop at my favorite seafood store (Harbor Fish Market) and bakery (Standard Baking) to pick up supplies for our trip to Fort Lauderdale on Big Smile. 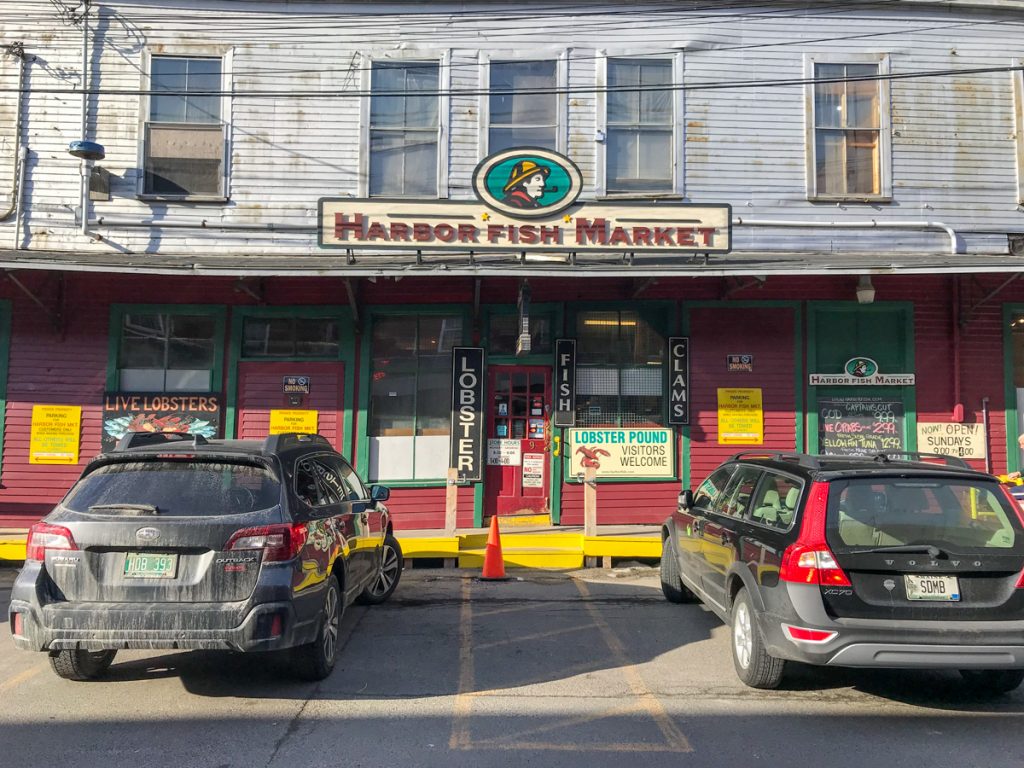 While I was skiing in Oregon, Cath and Tara were on a nine day Gate 1 tour to Costa Rica. Although they had a lot of fun, their number one complaint was that too many hours were spent riding on the tour bus. The scenery and beaches were beautiful, they said, and the activities were fun. It is a destination I hope to get to someday. 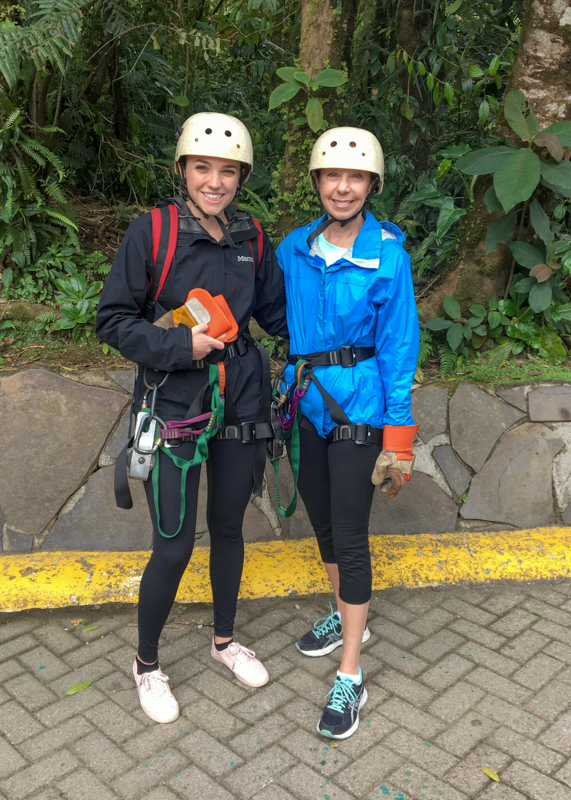 Ready for the zipline 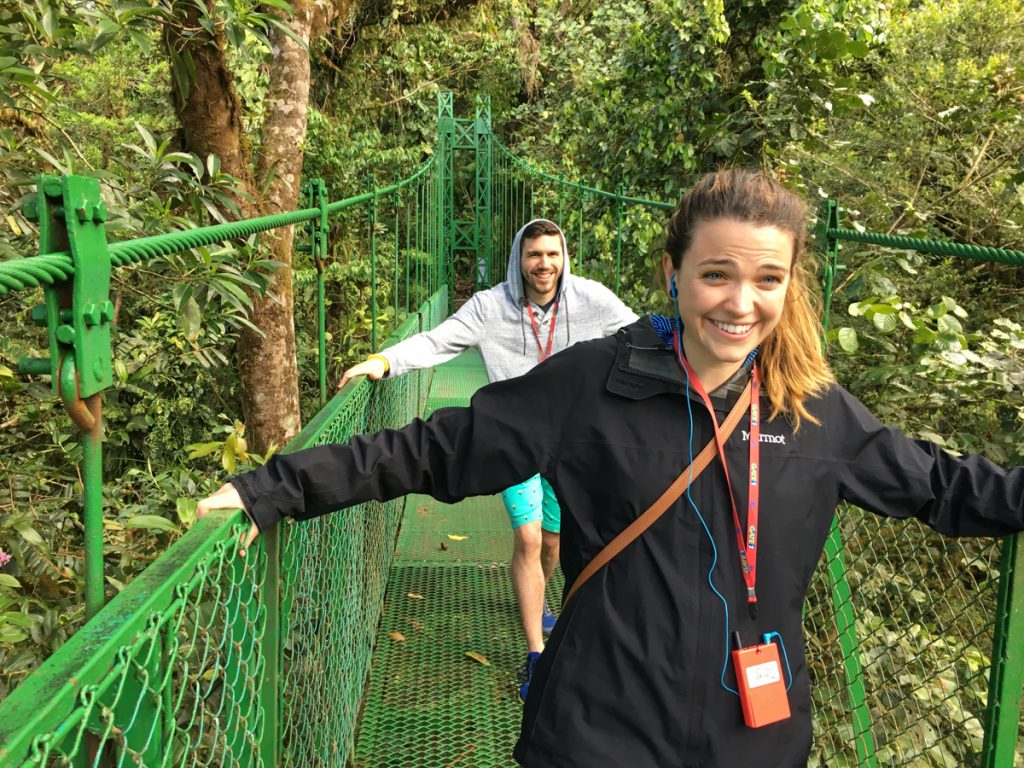 One of the 15 suspension bridges during the hike 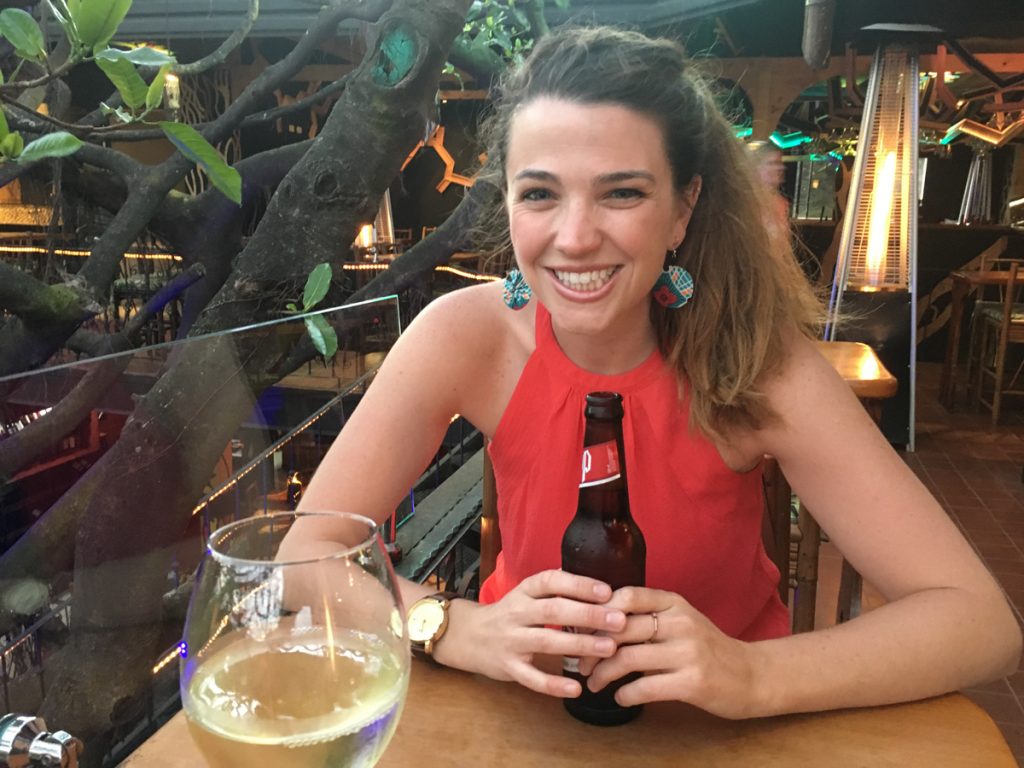 After the suspension bridges and zipline 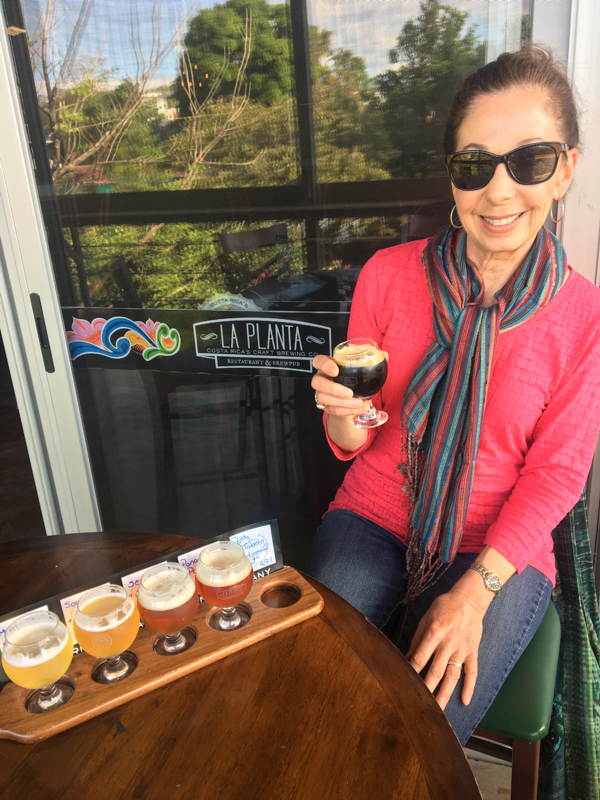 A flight of beer from La Planta, a small Costa Rican brewery

Cath took her first Amtrak ride when she left Tara’s Baltimore apartment and hopped on the Amtrak “Vermonter.” Nine hours later I picked her up in Bellows Falls. 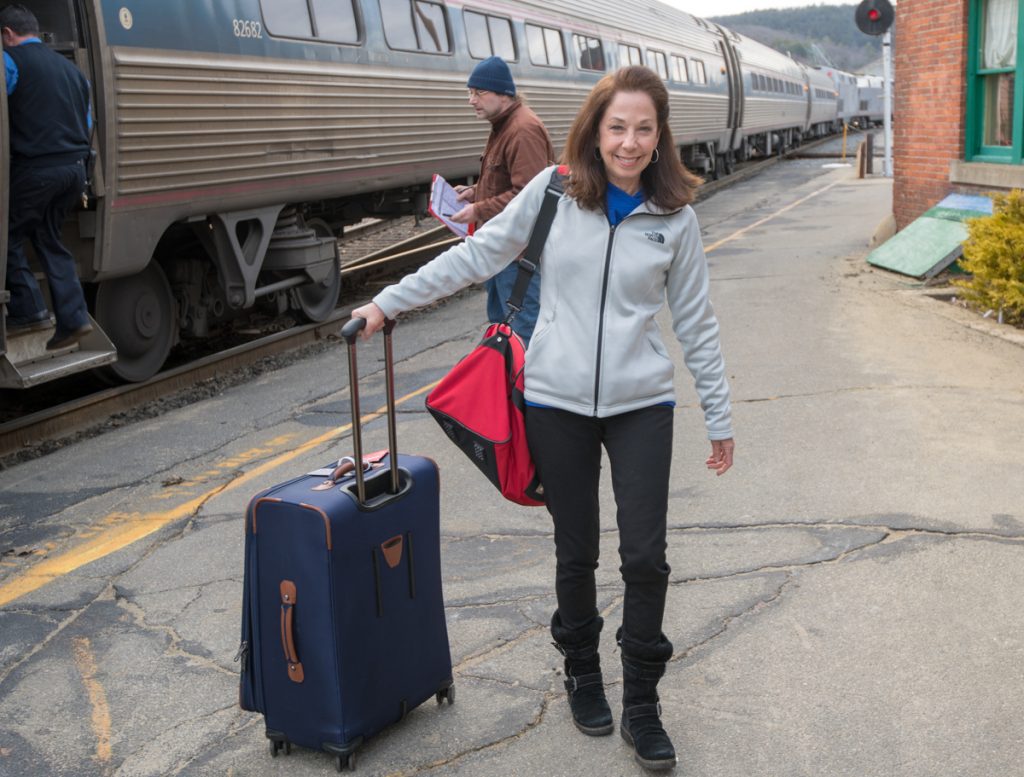 It’s March 31st and we leave tomorrow for the long, ten-hour drive to Atlantic Yacht Basin in Chesapeake, VA. We expect to push away from the dock on Tuesday morning but won’t know for sure till we check all systems on Monday. It will be good to be back on board. 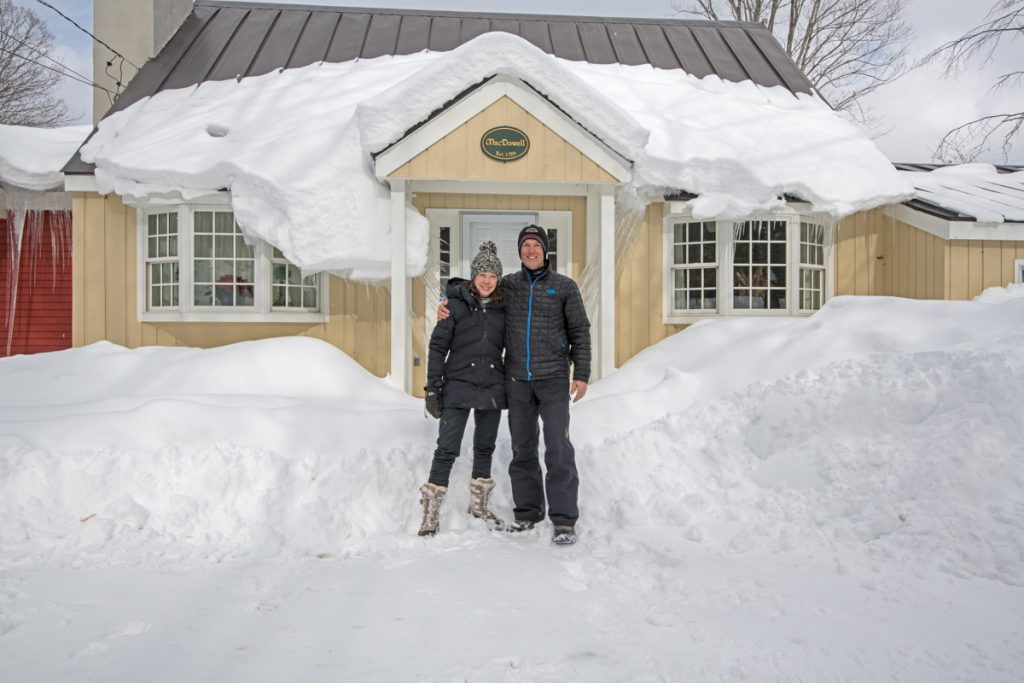 The March snow was beautiful