Left the Capital Yacht Club early to make the long day trip to Breton Bay. Pulling into this anchorage I discovered a major discrepancy between two of my navigation programs. The photo below shows the tide and current for Breton Bay on August 20th. However the info is completely contradictory. This is something I had seen before and need to contact the offending software company in the near future. 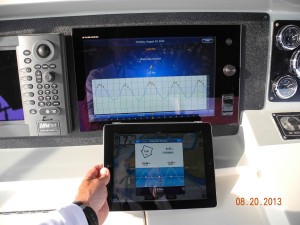 One night at this now familiar anchorage and than a 20 mile run to Smith Creek. This would be our last stop on the Potomac before heading north to Solomons, MD. Smith Creek is a quiet and beautiful anchorage with easy kayaking and beautiful sunsets. I had read that every morning a long time resident on an adjoining creek plays the Star Spangled Banner over loudspeakers. Well sure enough at 8AM we could clearly hear the broadcast from the next creek.

From Smith Creek it was on to Solomons, MD. This town, located off the lower Patuxent River, is a boaters paradise. Marinas abound and so do plenty of anchorages. We elected to stay several days at Solomons Harbor Marina, part of a Holiday Inn. This fall we are scheduling some maintenance work at Washburn’s Boatyard in Solomons but an immediate need arose and we contacted Eric, the owner of Washburn’s. He was kind enough to make a house call to review the battery situation on our genset. Problem was that the 18 month old AGM’s were dead and I had to jump off the main engine each time I wanted to start the genset. Eric confirmed the dead batteries so we rented a car and headed for Annapolis and the large “discount” battery store. They are big and heavy but of all the batteries on board these are the easiest to access. Why they died a premature death is something Washburn will need to figure out in October.

Across the Patuxent from Solomons is Naval Air Station Patuxent River. Situated on over 14,000 acres it is home to NAVAIR: “Naval Air Systems Command”. Navy flights and training are endless and the variety of aircraft overhead is impressive. 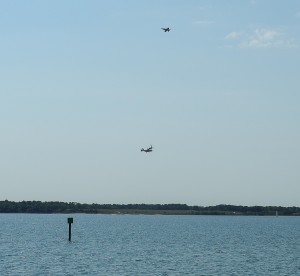 We crossed the Chesapeake and headed up the Eastern shore looking for a Creek we anchored on nearly thirty years ago. We found it off the Choptank River. La Trappe Creek and its smaller ancillary creeks has had some large homes built along its edges but the beauty and stillness remains. So do the crabs and we finally had some success. 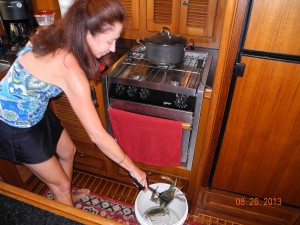 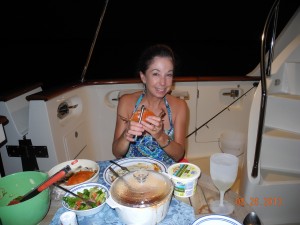 Not far from La Trappe Creek and just up the Tred Avon River lies the historic town of Oxford, MD. Our plans were loose and we ended up staying five days anchored in Goldsborough Creek, two miles east of town. It was Labor Day weekend but for most of the time we had the creek to ourselves.

Like La Trappe Creek we had not been to Oxford in nearly 30 years. Located right on the edge of town is the Robert Morris Inn. Built in about 1710 the Inn was once the home of Robert Morris, the father of the financier of the American Revolution. It is currently an Inn and restaurant and we picked a perfect Friday evening to eat outdoors. Being Friday night it was also race night at the Oxford Yacht Club. We were able to dinghy right up to the start of the race and then watch the finish from our table. Not bad. 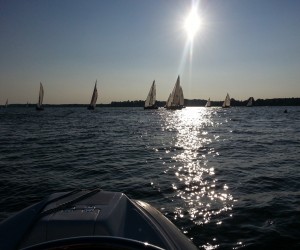 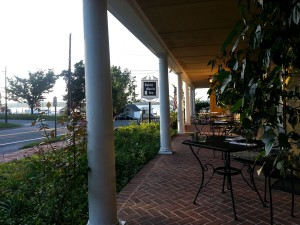 Andrew and Nicole had asked if they could join us for a night and so they drove down from DC Saturday and we picked them up at the Oxford dinghy dock. Another perfect weather day. 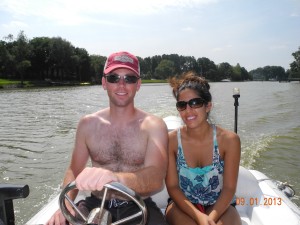 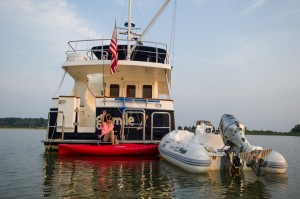 We learned awhile back that Nicole likes to eat. Here she brought a sandwich for Cath. 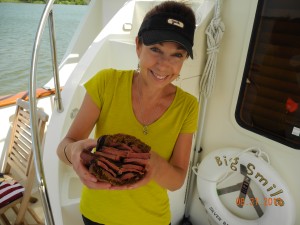 Our type of deli

Big Smile is now docked at Herrington Harbor South on the western shore of Maryland. Andrew picked us up early and dropped us at Reagan National. From there it was on to Boston and Boston to Rutland via our now favorite airline, Cape Air. I am sitting in the lobby of the Silver Bay Inn on Lake George. I’ll post some LG photos in a few days.