It has been well over a month since we returned from the Bahamas and drove back home to NJ. Since our return we spent most weekends at Lake George and had the pleasure of having my Aunt, Uncle and cousin with family renting down the road for a week. We transitioned from big, heavy, slow trawler to speed boat and jet ski. Several weekends of skiing and tubing are now over and we flew back down for a week on Big Smile.

During our shake down cruise in the Bahamas I had noticed that the batteries were losing charge too quickly while underway. In fact during our 12 plus hour return trip to Ft Pierce I had to run the genset twice as voltage dropped and battery capacity rapidly depleted. Dave Arnold of Dave Arnold Marine is our mechanic and also watches the boat while we are away. He discovered that the alternator was not putting out the amperage and voltage per spec and thus not keeping up with the electrical draw from the instruments and other accessories.  He replaced the alternator and also traced and fixed a non functioning volt meter on the electrical panel. So among many other things planned for this week we will check out the new alternator.

Our dock neighbors and friends Capt Chris and Alyse showed up Friday afternoon and said they had a five day training session starting the following day. They invited us onboard for desert that night and we ended staying for dinner including the couple who were starting the training. Nothing better than eating dinner on the aft deck.

Saturday morning we gave a tour of Big Smile to the couple before departing for Sunset Bay Marina in Stuart. The plan was simply to check out the marina and town for three days and decide if we wanted to spend the coming winter there. The trip down the ICW was new to us and while only 28 miles you need to pay attention as the channel does shoal especially  around “the crossroads” where the St Lucie inlet, river and ICW meet. In fact at high tide we had just 1′-6″ under the keel just west of the crossroads. It was a beautiful Saturday and the many shoals and spoil islands near the mouth of the inlet attracted hundreds of boats; fishing, rafting and otherwise enjoying the day. 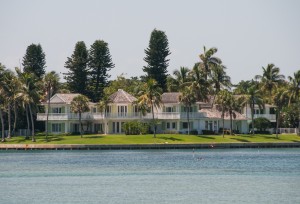 We turned up the St Lucie River and headed for the marina. Many interesting homes grace the river and most looked deserted for the summer.

Sunset Bay Marina is relatively new with nearly 200 slips and 69 moorings. I have read many good things online about the staff, “residents” and area. After hailing the Roosevelt Bridge for an opening we motored into the marina and called the harbor master to confirm slip assignment and request a line tender. Ten minutes clear of the bridge we were tied up and electric connected.

Sunset Bay Marina also has a lively restaurant. It being the middle of August the Saturday night crowd was not that boisterous but it definately caters to a boating crowd and offers side tie for diners arriving by boat.

The historic downtown of Stuart is a five minute walk from the marina. Many of its original buildings have been restored and it provides a lively area of entertainment, shops, a Sunday farmers market, small band stand on the river and a historic restored theatre. The “Lyric Theatre” was built in 1925 and served many functions over the years including as a non-denominational church for nine years. In 1987 during the redevelopment of the historic district the theatre was saved and became a significant part of the redevelopment effort. We made it to the farmers market Sunday morning and while it did not rival the market we go to in Londonderry Vermont it was still enjoyable. We were told by a husband/wife vendor that it livens up considerably starting in the fall.

We both agreed that this would be a good place to hang our hat for two months and signed up with the Marina starting in early January. After that we’ll see.

The trip back was uneventful and since it was a week day we passed only a handfull of boats. Half way between Ft Pierce and Stuart sits the St Lucie Nuclear Power Plant. Commissioned in in 1976 it is a twin nuclear power station run by Florida Power & Light.

Harbour Isle with its glowing orange tile roofs can be seen for many miles and is an easy landmark to spot. The entrance channel is an easy mile off the ICW and in good weather affords a nice anchorage. Tuesday morning prior to leaving for the airport I met with Darrell of Whiticar Marine North. He specializes in electronics installations and does many of the Krogen Express’s that get commissioned at Harbour Isle Marina. I have commissioned him to install new Furuno TZ touch screens, 24″ digital radar, Rogue Wave, and a new stereo system. It’s on the schedule but  won’t be complete for a month or more. Something to look forward to.