Eight weeks after leaving Big Smile at Washburns Boatyard in Solomons, MD we are back on board and heading south to Florida. We are spending two nights at Fernandina Harbor Marina in Fernandina Beach FL. Tomorrow we push off for our last overnite and will arrive Fort Pierce on Tuesday.

Our experience with Washburns Boatyard could not have been better. The main item of work we contracted to have done was performing an electronics install for the other half of the system replaced (by others) last year. We opted to install a Garmin suite to complement the Furuno suite. This provides a redundancy in both gps and radar as both can operate independently. It does require the operator ie Cath and I, to learn two systems but the extra work is worth the effort and we are comforted by the added peace of mind. Several other items got attended to including soda blasting the bottom to bare fiberglass. The bottom was not too rough but did require some fairing prior to the epoxy barrier coats and bottom paint. Stabilizer work included complete removal, tear down and cylinder replacement. According to their mechanic they were in rough shape and needed this overhaul. Numerous smaller items were found and taken care of while Big Smile was on the hard. A quick sea trail on Monday with Eric Skow (owner) and mechanic Ricky showed all in good order. On Tuesday December 3rd we pushed off. 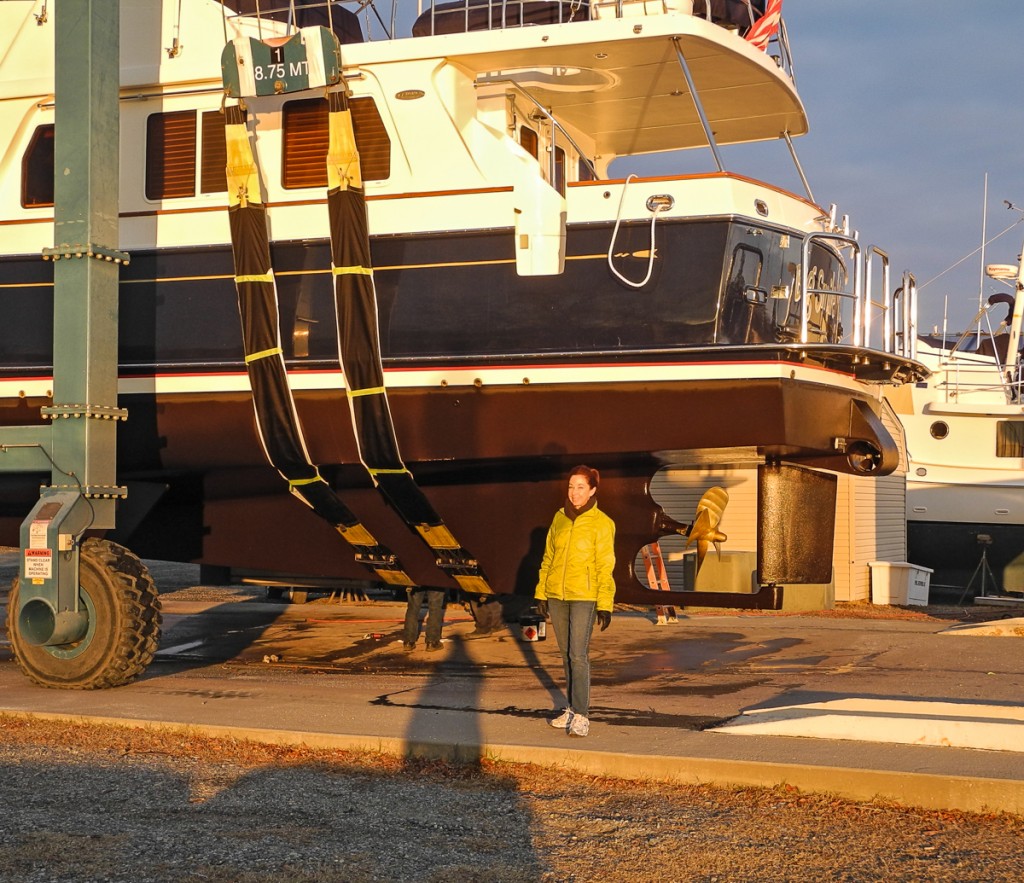 The trip down from Solomons MD started off very cold with temps dipping into the 30’s a few nights. Our route included the intracoastal through Virginia and North Carolina with various stops along the way. Unlike our trip north we are avoiding the Dismal Swamp canal and instead making a left turn near Norfolk to take the Albemarle and Chesapeake canal. Our schedule had several float days in case of bad weather and it also requires three offshore, overnite passages.

The ICW winds through Camp Lejuene and a favorite anchorage is Mile Hammock Bay where Marines practice amphibious landings and other tactics. It is a large, safe anchorage and the kayaking is superb. Two nights were spent here as pea soup fog enveloped us the morning we were to leave. We actually attempted to leave but less than a 1/4 mile from the anchorage we ran aground. It was fortuitous however as the fog didn’t lift till about 2PM. We did float free after three hours of waiting for the tide to rise and inched our way back to the anchorage. 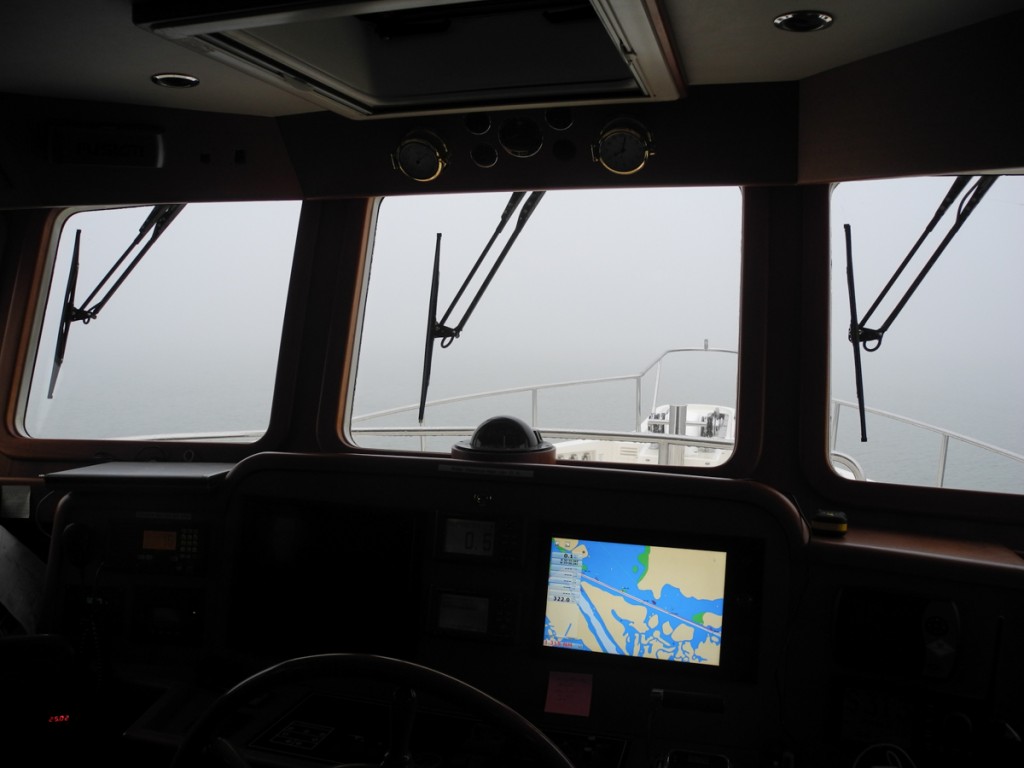 Stuck in the mud on the ICW

Our first overnite of this trip had us leaving Carolina Beach NC and running down the Cape Fear River to the Atlantic and on to Charleston. It was 36 degrees and brilliant sunshine when we woke. Cath is in charge of the anchoring no matter what the weather and had to dress as if it were Vermont on this morning. 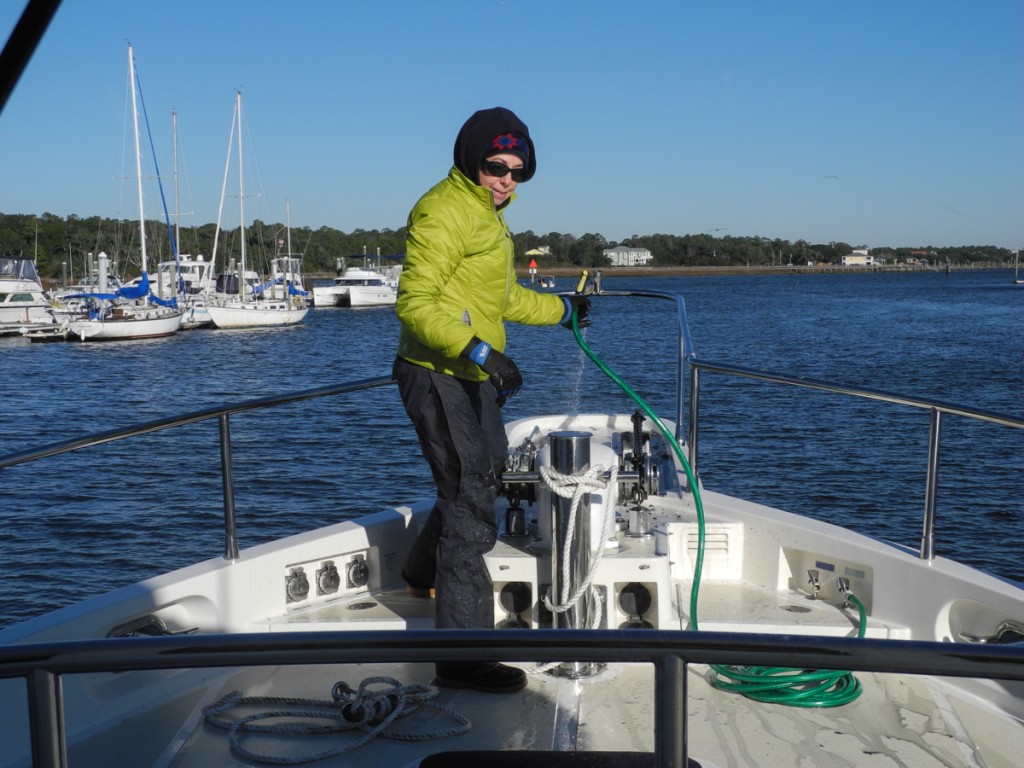 We had a easy offshore run and pulled into Charleston Harbor at 4AM. We dropped the hook and slept till 8 before returning to our favorite Charleston marina for one night. The marina trolley took us into Charleston for dinner. The city was hopping and the restaurant was superb.

Our next offshore run brought us to where we are at the moment. Leaving Charleston Harbor at 10 AM would put us at the entrance to St Marys River, the southernmost point in the state of Georgia at about sunrise. From there its a quick trip to Fernandina Harbor Marina. The offshore trip down however was tough as the wind and sea turned to the east at about sunset creating a beam sea that rolled us all night. In addition while Cath was cooking dinner we realized that smoke was coming up from the lower cabin. We checked the engine room immediately but no smoke there. It appeared to be coming from the third stateroom vent. I immediately shut off the HVAC system which had been running to heat the boat and the smoke slowly stopped. We opened hatches and vented the boat for quite some time as the smell of burning wiring was not pleasant. What happened was water somehow hit a five gang terminal block that provided power to the HVAC unit in that state room. It shorted and started to melt the block and wiring. It was a bit unnerving to have smoke billow up from below when you are 8 miles offshore. I replaced the block yesterday and all is well.

We just got back from a bike ride to the beach. The town of Fernandina Beach is historic and very interesting. Lots of restaurants, shops, and restored homes. We made it to the Saturday farmers market and had a field day buying from the various vendors. We will return and spend more time, maybe this spring. 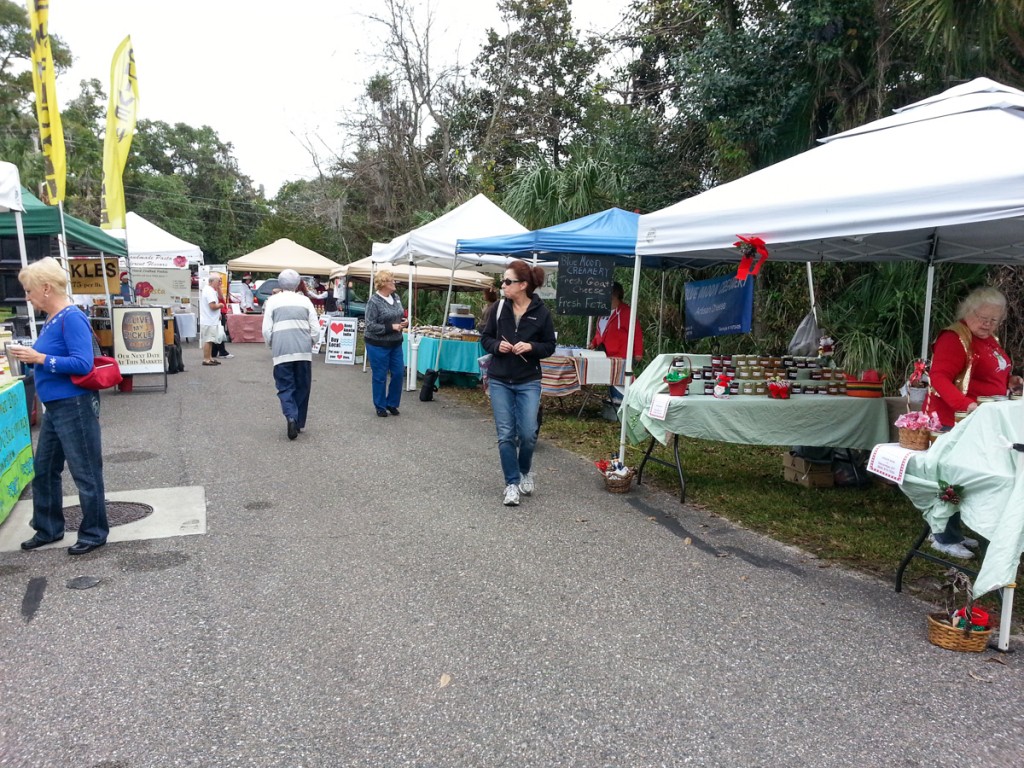 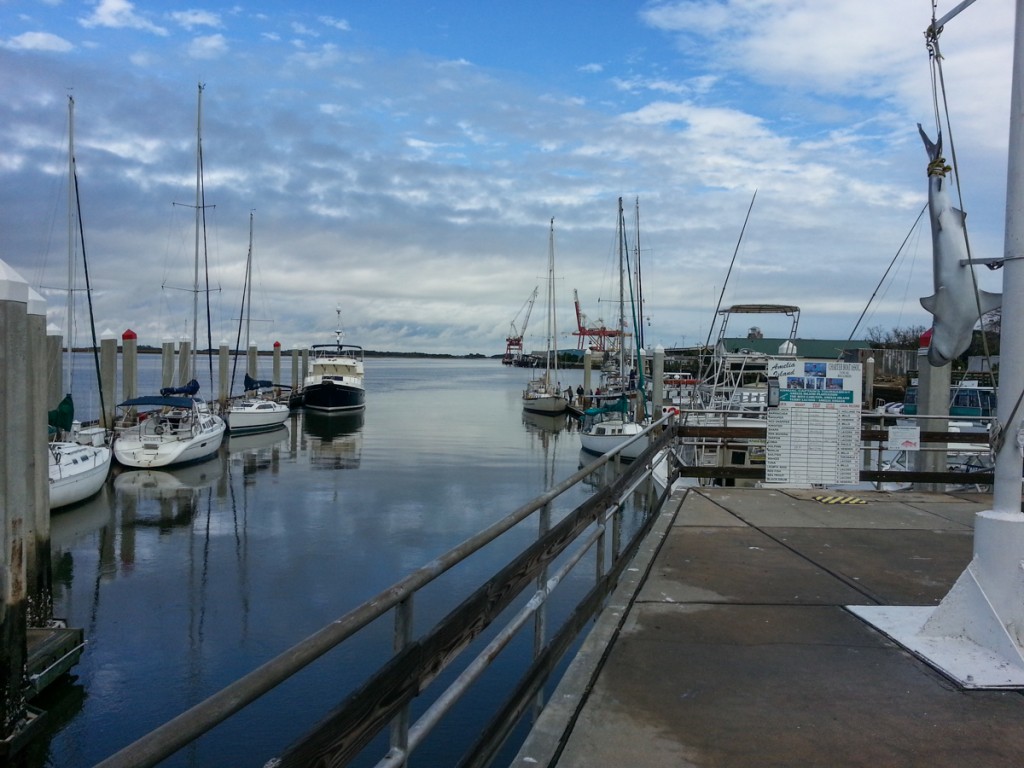 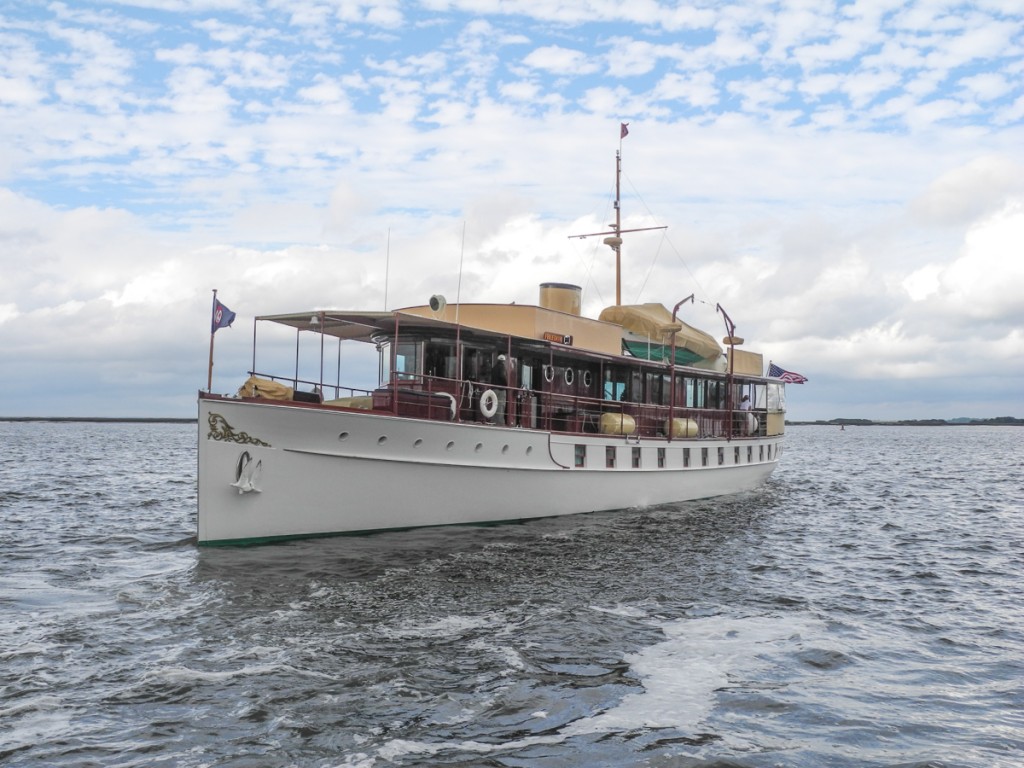 We will leave tomorrow at sunrise for a 31 hour offshore run to Ft Pierce. Big Smile will stay there while we fly back for the holidays next Friday. We return via car to FL after New Years and will spend the month of January in Stuart. Time for a glass of wine before dinner.

Below is a typical night view on board. 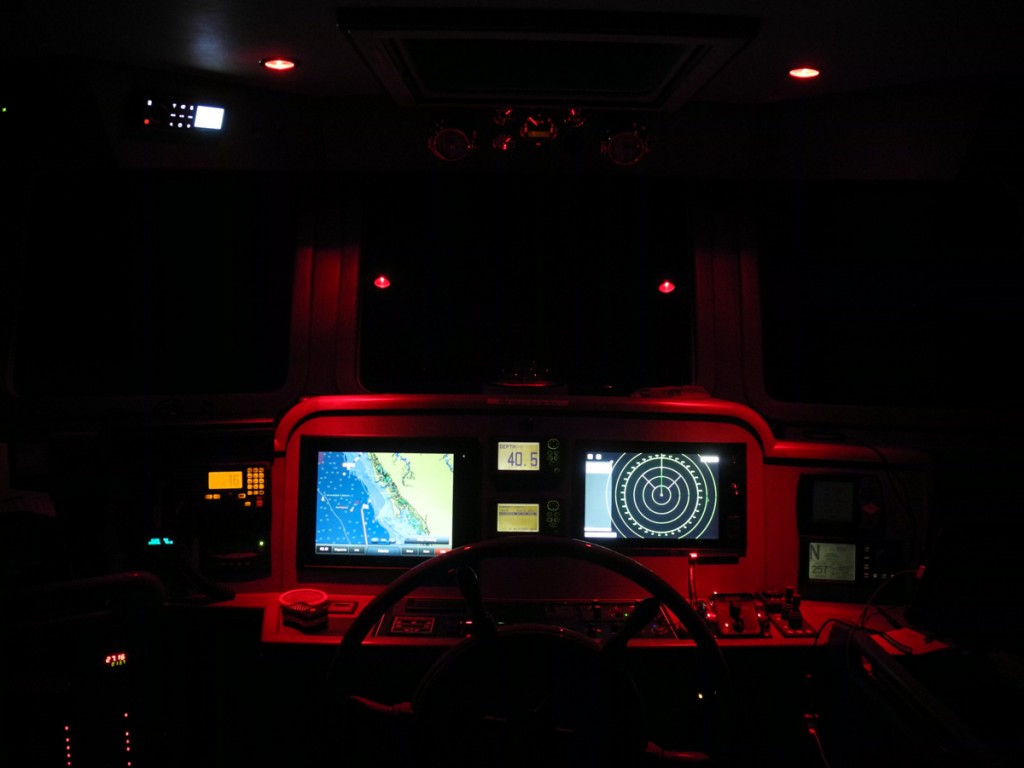